Great. I'll email you those pics tomorrow evening. Thanks so much!

Depending on what time you send them I should be able to answer you right away. It's raining again here in So Cal (ARGH! ENOUGH WATER ALREADY! SHEESH!) so I can't do any more tolex until it stops and the humidity goes down a couple of notches. The tolex glue just won't set up right if it's too damp.

You may have to wait until Sunday for your "fix it" pics to be posted here. Just depends on the weather out here I'm afraid. Try to be patient. I hate stripping of tolex... take it from someone who stripped his first cab twice, and got it right the third time. It ain't no fun taking off hide glue, too. That's what I used to use... (PITA)...not anymore.
Last edited: Apr 24, 2012
5

after looking at the job I did, I've decided that there is no way to fix it. I need to start over, and do it right from the start. Would you be able to walk me through the steps some time in the future? Will you have pics to help as well? I'll be patient and wait for you when you work on yours. Thanks again.

Originally posted by 594life
after looking at the job I did, I've decided that there is no way to fix it. I need to start over, and do it right from the start. Would you be able to walk me through the steps some time in the future? Will you have pics to help as well? I'll be patient and wait for you when you work on yours. Thanks again.
Click to expand...

I'm walking everyone through the steps in a few days, or less than a week, whenever the rains stop. I'll probably get started again on Monday afternoon at this rate, weatherman, nature and God willing.

No problem helping you out privately, either. Just click the email button at the bottom if you're needing some advice. I've screwed a few up, and paid the price of impatience, too. Usually, you wind up kicking yourself for it AFTER you see the right way to do it. That's just the way it goes. You'd be surprised what you can fix, you know. I'd take a look at this thread on Fender recovering, if your corners don't have major cuts in them like this, then I can tell you how to fix it. If you have cut it down to the cab, then you're right, it's time to strip it, sand it and start over. Here's a pic to gauge it by... if you're cut shorter than this...you're cooked and starting over.
http://scumbackspeakers.com/tutpics/r3.jpg
Here's the whole thread for you to review...
https://www.thegearpage.net/board/index.php?threads/68281&highlight=Tolex+101
And a piping tutoria... which we'll go over again in the 4x12 recover thread...
https://www.thegearpage.net/board/index.php?threads/67441&highlight=Tolex+101
Last edited: Apr 24, 2012

This is awesome, thanks for posting it. I've got a naked large-check cab. I think I'll leave it naked, but after seeing this thread, I may order some metal handles for it. Seems like they would just feel better/more solid when carrying the cab.
5

Do you use one piece or 4 pieces of tolex to cover a marshall style 4x12?

Originally posted by 594life
Do you use one piece or 4 pieces of tolex to cover a marshall style 4x12?
Click to expand...

Four. I overlap them slightly over the piping channels, then cut them down the center of the channel. I also paint the channels black first to allow for any possible "peaking" of the paint around the piping. That's usually not a problem if the piping is cut right, and you're careful. But for tutorial purposess, we'll paint it black in case you cut it off center just slightly.

You could also use a black "Sharpie" to color in the channels instead of flat black paint. Either way works. Here's what your cab should look like before you get started if your tolex is "fubar". When your cab doesn't feel "gooey" any more, and it looks mostly white, you're ready to recover it with tolex. 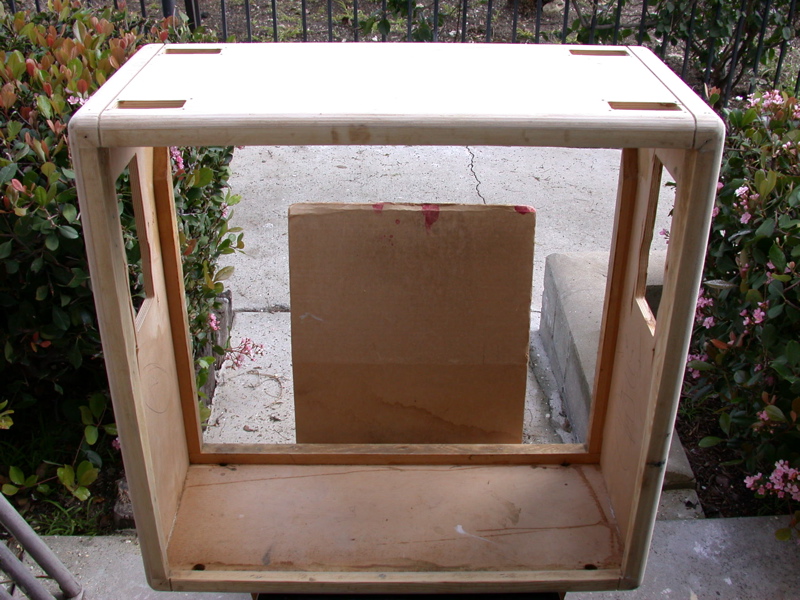 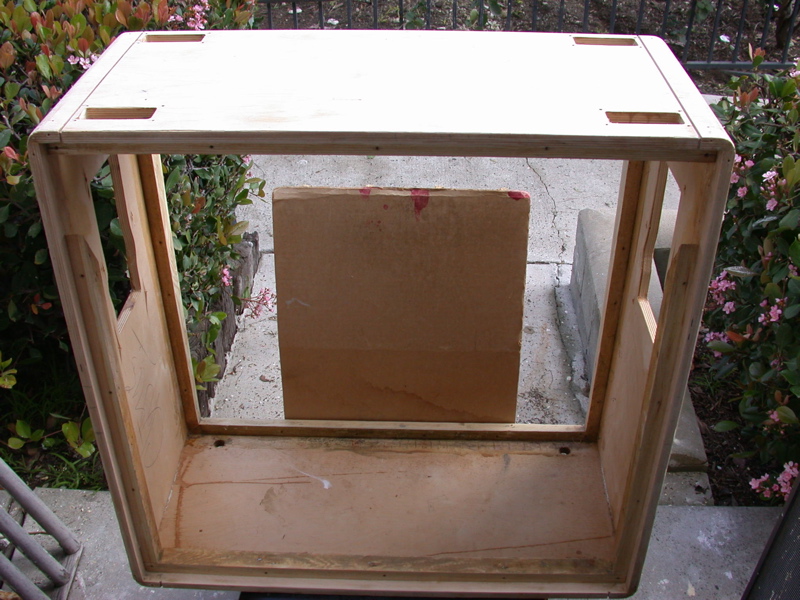 Your channels have to be this clean. No glue, no residue, no nothing. 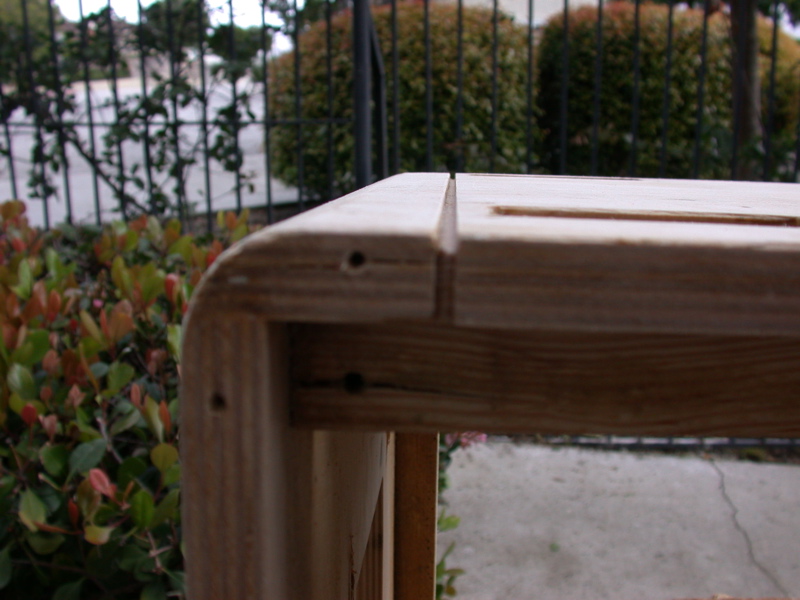 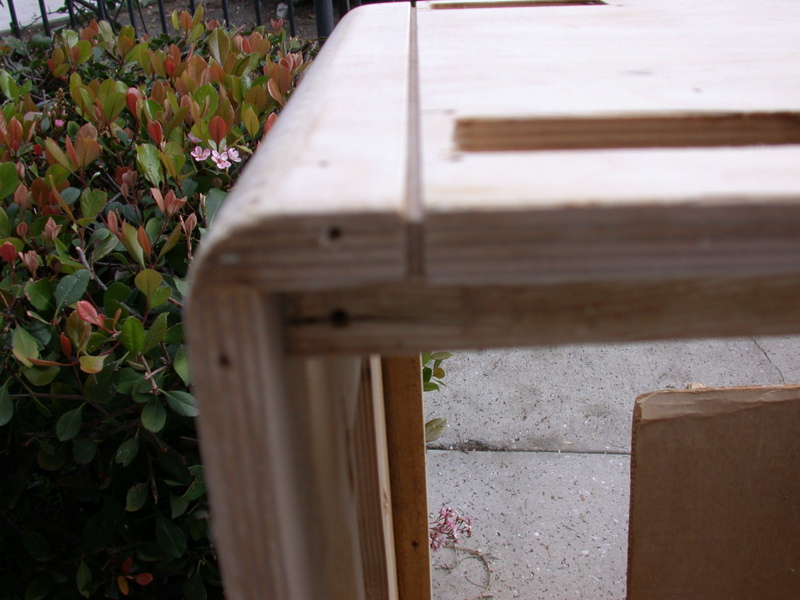 You get those channels clean with a small straight tip screwdriver, and a folded piece of sandpaper (60 grit is what I used). Then you're ready to go next week when the weather clears up around here, and I can continue this thread.
Last edited: Apr 24, 2012

Will these instructions work if I want to recover my 4x12 with suede? I think goes better with my black Vox grill cloth

Originally posted by 908SSP
Will these instructions work if I want to recover my 4x12 with suede? I think goes better with my black Vox grill cloth
Click to expand...

LOL. Yeah, probably they will work for you if you're installing suede... but stretching the suede tight might cause some rips...so be careful with it!
P

I like those slippers... thanks alot for showing us all how to do this.

Originally posted by Prymo
I like those slippers... thanks alot for showing us all how to do this.
Click to expand...

Glad you like them! They're pretty comfortable, suede w/sheepskin lining ($19 at Costco). Great for cold mornings when I'm walking the dog through the fog...like this morning....but I digress.... please check out my latest restoration. I found a 1970 Marshall "beater cab" that had been recovered with the wrong tolex, corners added...etc... I took it back to stock. So I started off with this cab: 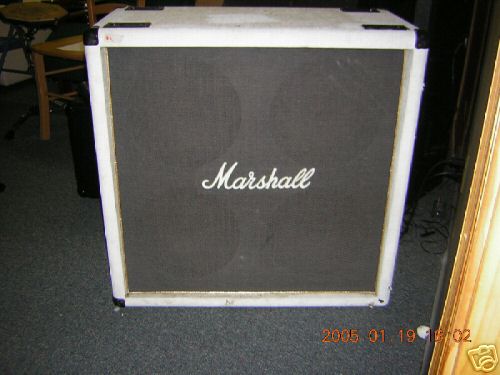 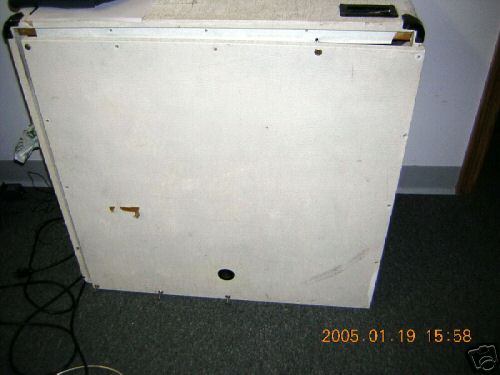 Then I stripped it, filled it's various blemishes and extra corner holes, and started recovering. If you look further up the thread, I showed this cab with it's piping channels as an example of why you needed them very clean and without extra goop in them. Before: 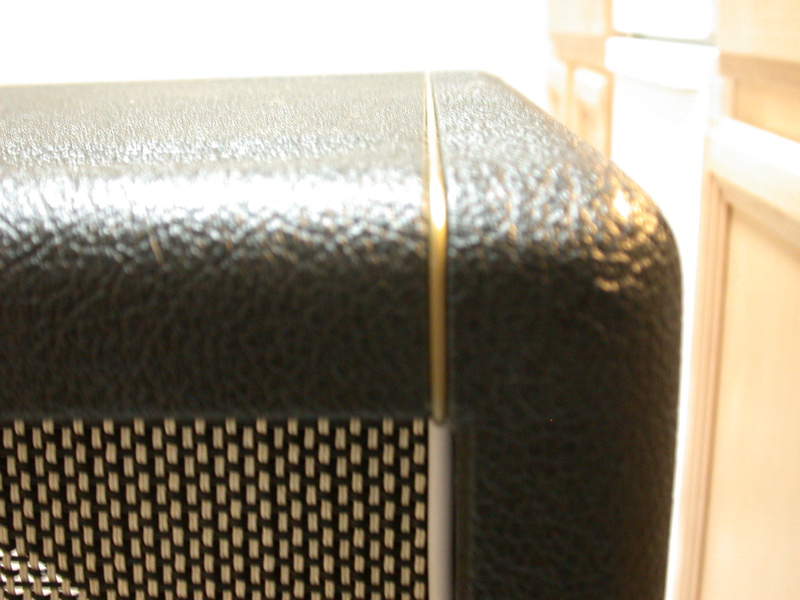 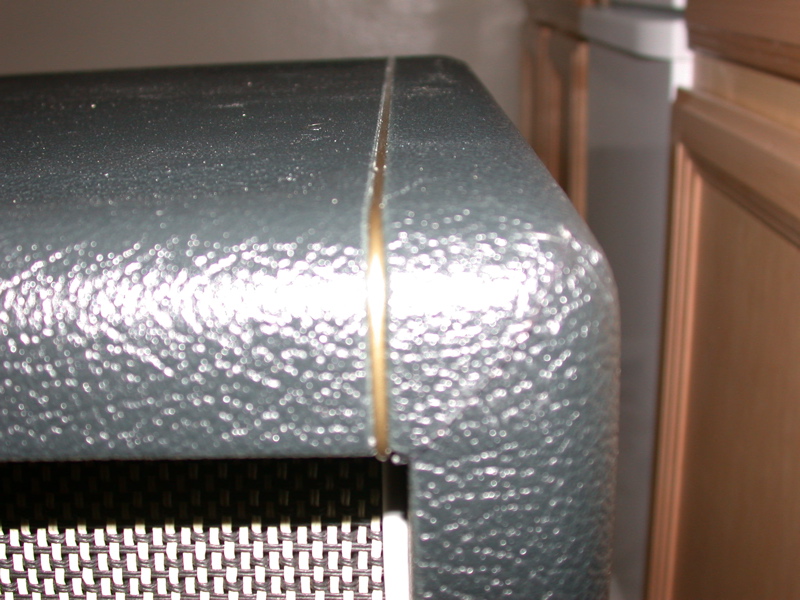 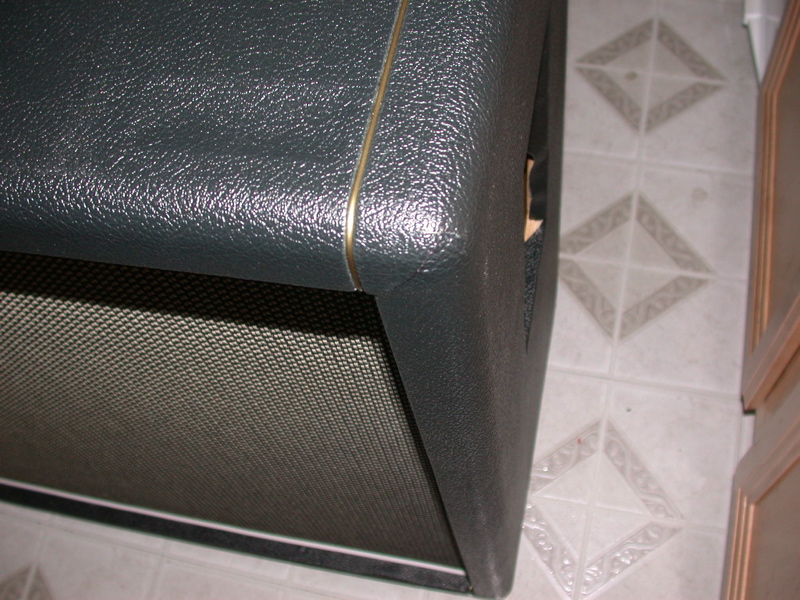 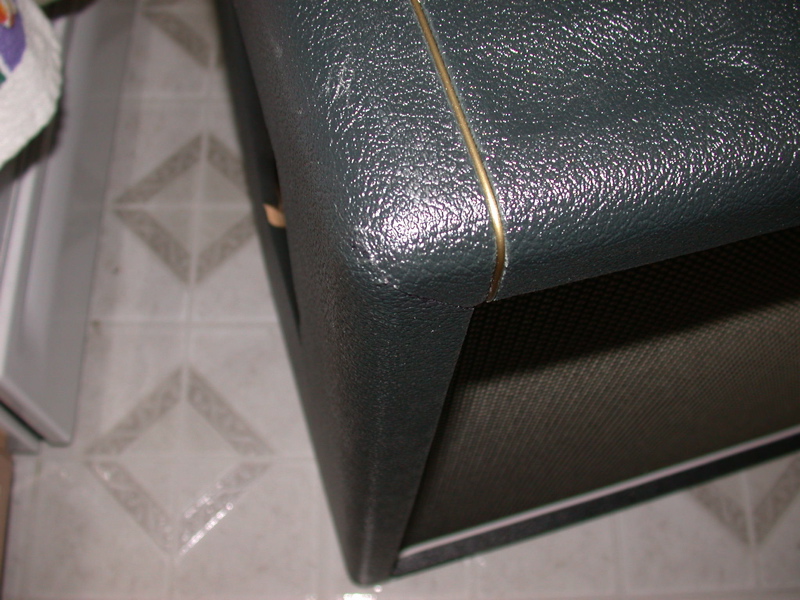 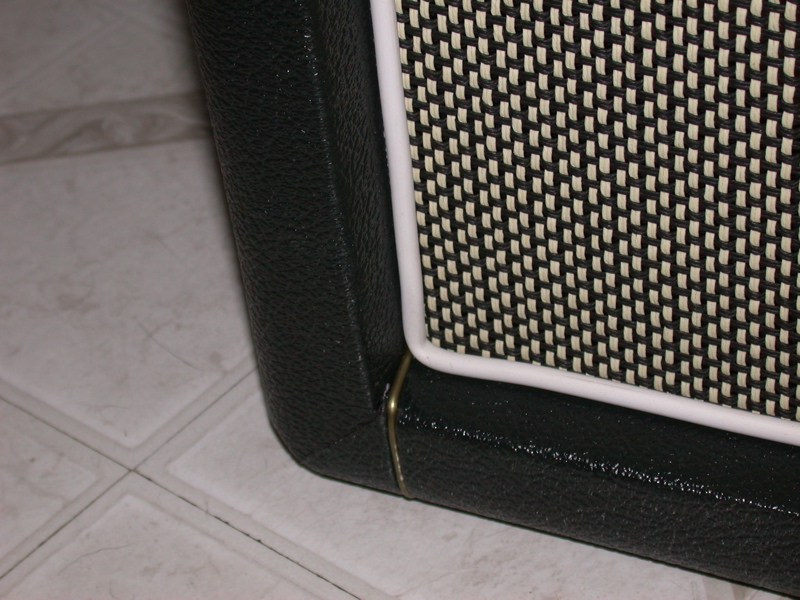 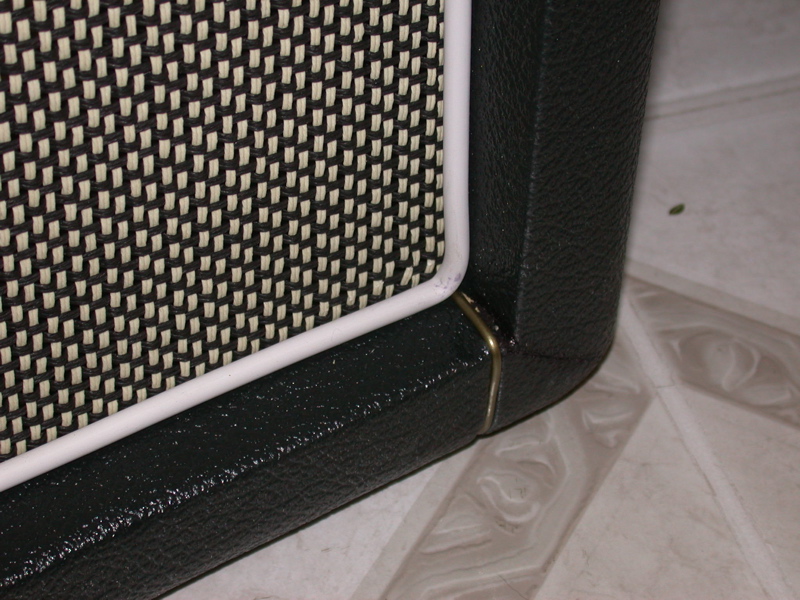 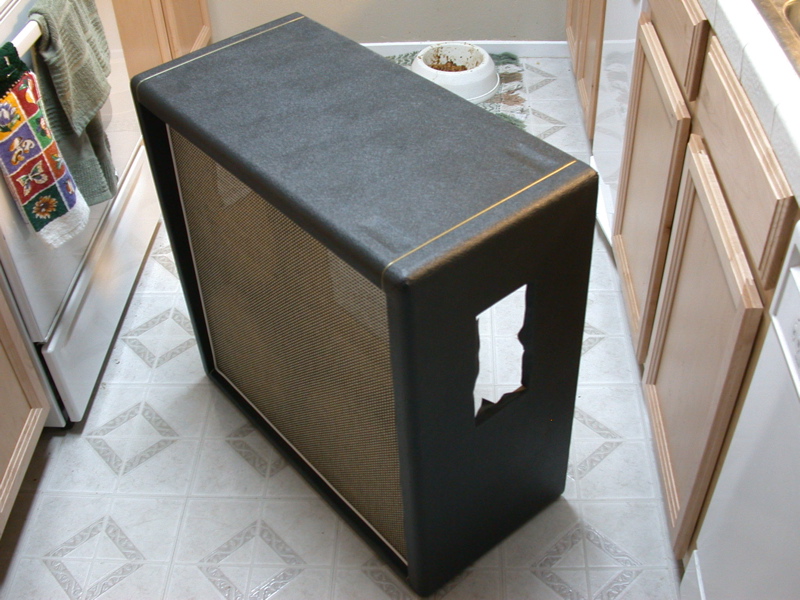 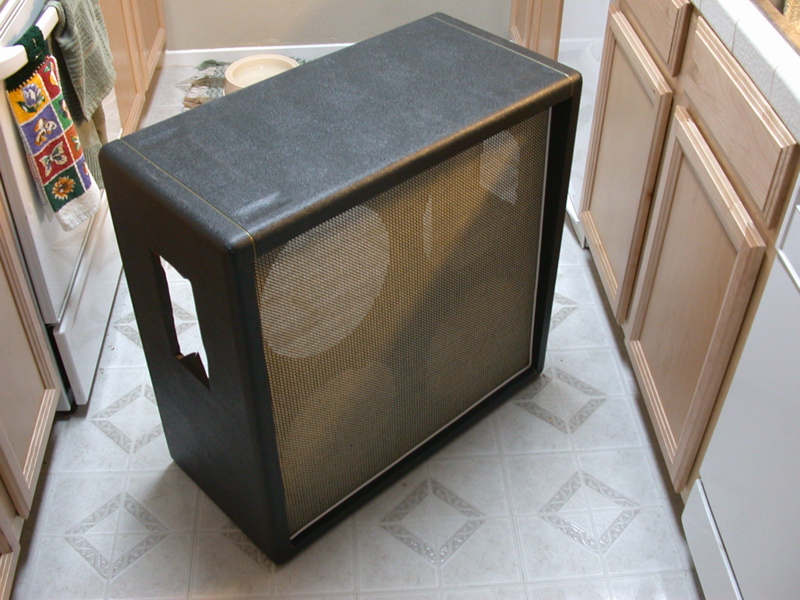 I'll demonstrate how to add in all the caster cups, handles (yep this one came with metal handles) with new T-nuts for anchors and tidy up the front/back corners and back panel tolex. If you look carefully you can see some white edges of the tolex, and white wood in some corners. No problem. We'll get a black "Sharpie" and darken in those very small spots and have ourselves a nicely restored 1970 Basketweave straight cab to load up with some speakers.

I'll also go into details on the corners, but basically you wrap the side pieces FIRST, then the top and bottom pieces. This is where you can make or break your tolex work, so this one I'll go into some detail on. Check in later today or tomorrow, after the sliver piping for the slant cabinet arrives.
Last edited: Apr 24, 2012
5

Would you be able to post a few pics of the step by step corner cutting process?
5

Oh by the way, that cab looks GREAT! I hope I can make mine look half as good as yours!

Originally posted by 594life
Would you be able to post a few pics of the step by step corner cutting process? Oh by the way, that cab looks GREAT! I hope I can make mine look half as good as yours!
Click to expand...

Thanks for the kudos on the cab. I'll be doing the same thing to the slant cab in a couple of days, and it will all be pretty clear as to how you do it. I'll probably have time to do it on Thursday or Friday. The slant cab still needs to have it's piping channels cut first...then I can complete this with the piping, and all that good stuff.

Originally posted by 594life
Would you be able to post a few pics of the step by step corner cutting process?
Click to expand...

Ok gents, here's how to cut your corners, and not make them look like dog crap...
Let's start off remembering that we had a 20" by 34" piece going up each side. At the top there should be some extra tolex past the point we'll cut it to meet the piping channel (disregard if you have the JCM 800 or 900 cab, no piping generally on those cabs).

So to start this off, let's use something that won't kill us to practice on...like a piece of standard printer paper. Wrap the paper around the corners, then tape it down as shown with about 5 inches hanging off the front (you better have almost that much to wrap around the front edge of the cab, and behind the grill cloth anyway). So let's start here with the paper taped down to the corner: 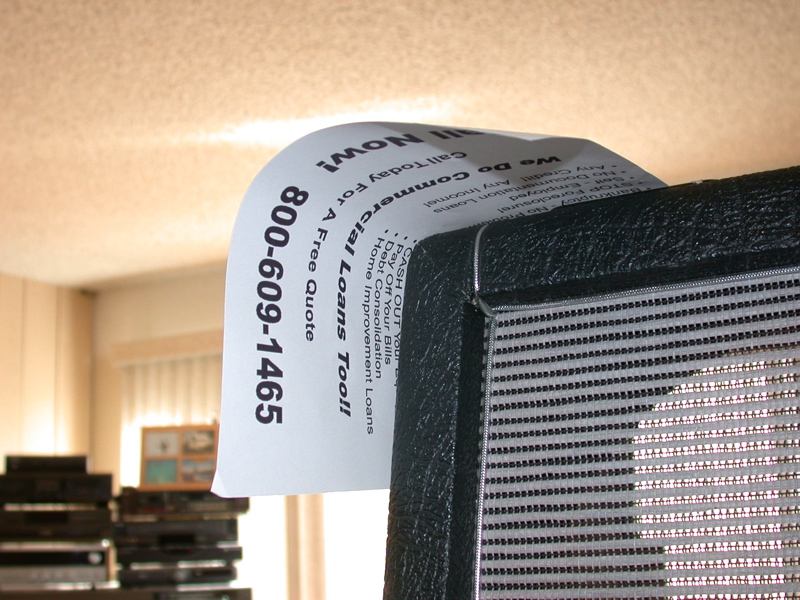 Then make a cut at the corner of the paper farthest in towards the cab at the 45 degree angle made by the two joints. So cut it with a razor here (keep in mind this is paper, but you'll do this to the tolex, too). 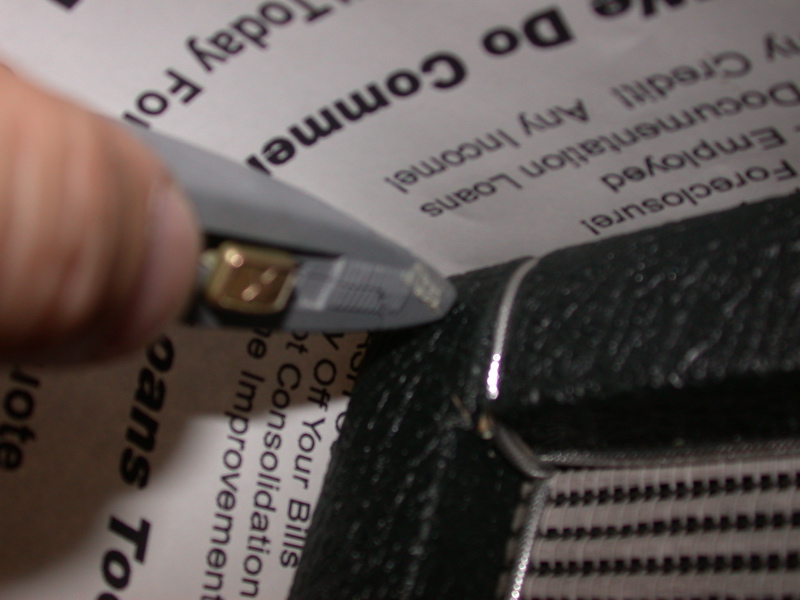 You should have something that looks roughly like this when done cutting. Don't get to freaked out if it's not perfectly at the 45 degree angle, alot of this will be cut off to fit. 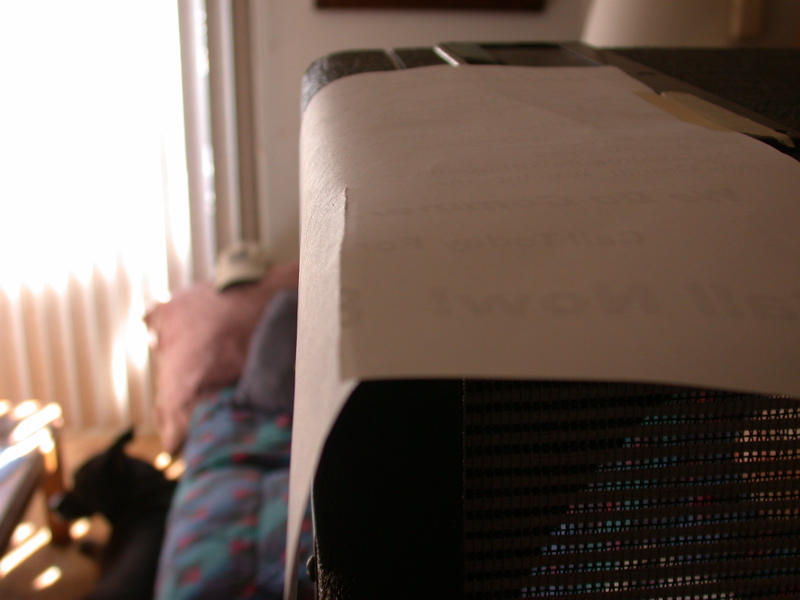 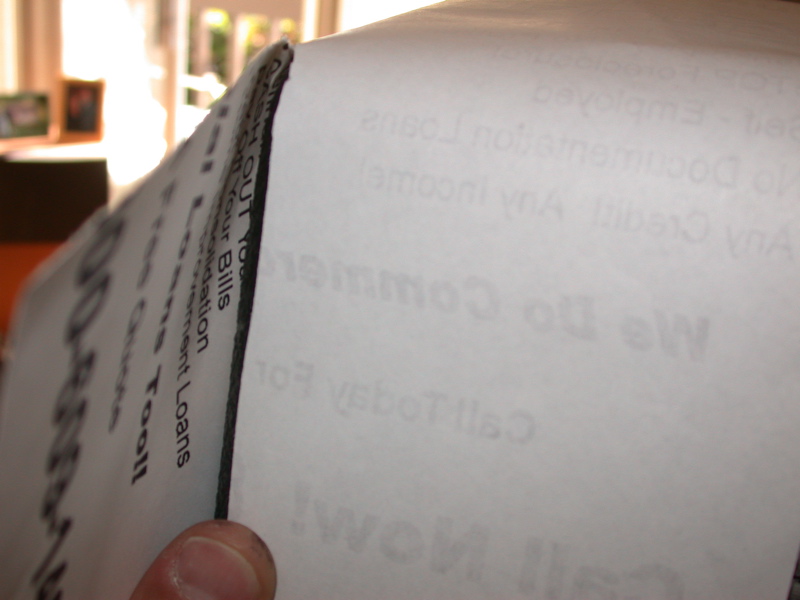 Then pull down the right side of the cut (the top piece of tolex) and cut as shown up to the inside lip/edge of the cab where the tolex folds over. CUT NO FURTHER THAN THE FRONT EDGE! 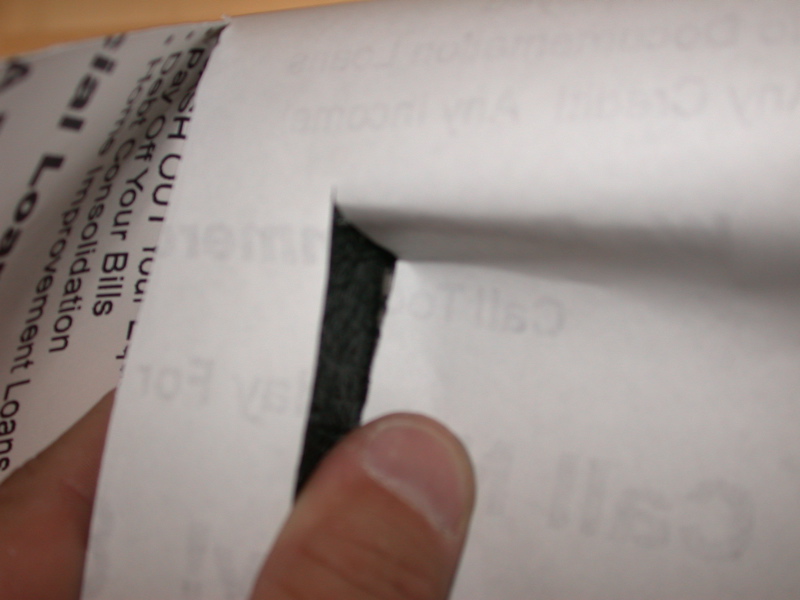 Do the same cut for the side piece of tolex. 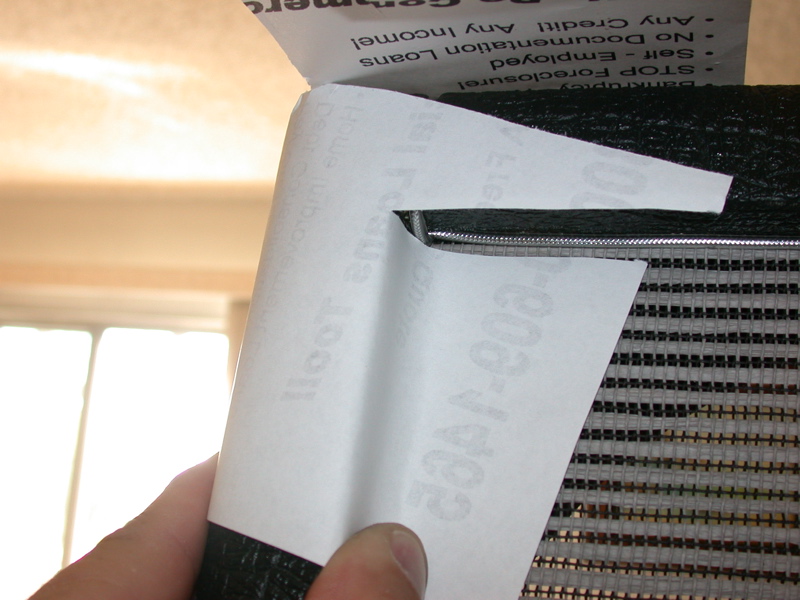 Pull the side piece in, pull the top piece on top of it, tight, and draw a 45 degree angle line. 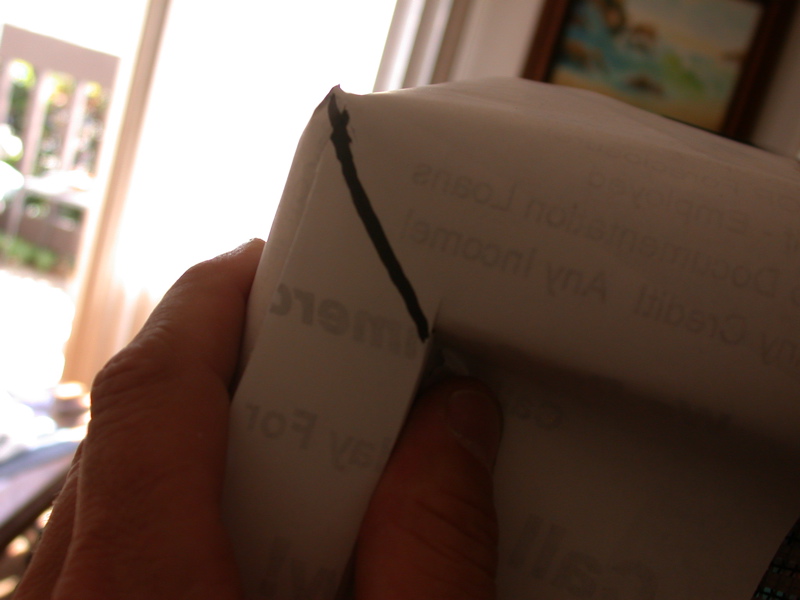 With the tolex, it should look something close to this. 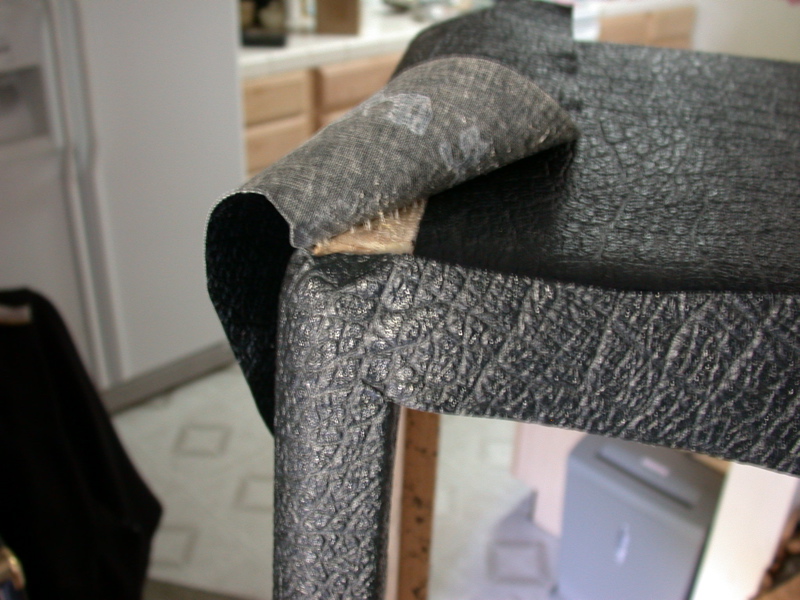 If you're going to be manly, you can do it by yourself. Just lay the tolex down, lay a straight edge at a 45 degree angle, press down tight, and cut the TWO PIECES OF TOLEX AT ONCE with the razor knife. If you like, get a friend to hold the straight edge, while you cut the tolex layers. 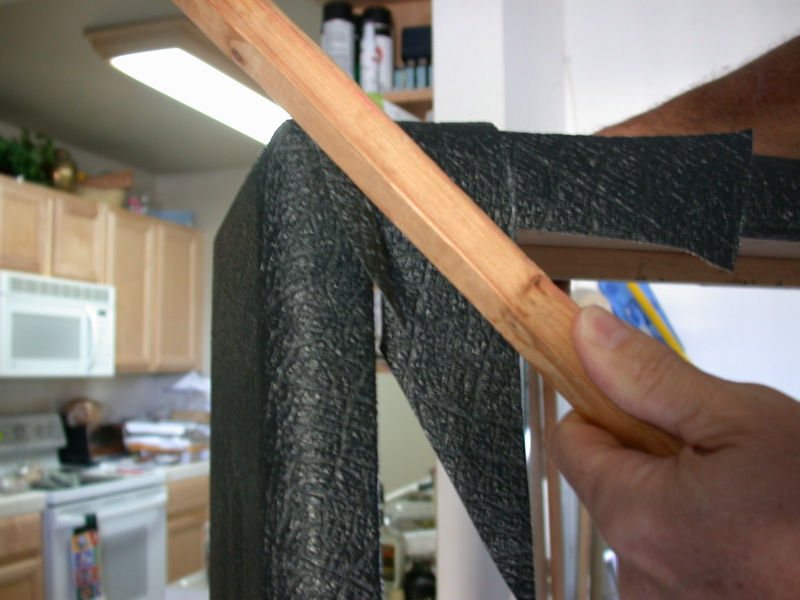 Since you had the tolex tight, and the cut was through both pieces of tolex, you should now have two perfectly matched "halves" that meet at the right angle, and it should look like this. Before piping is installed pic. 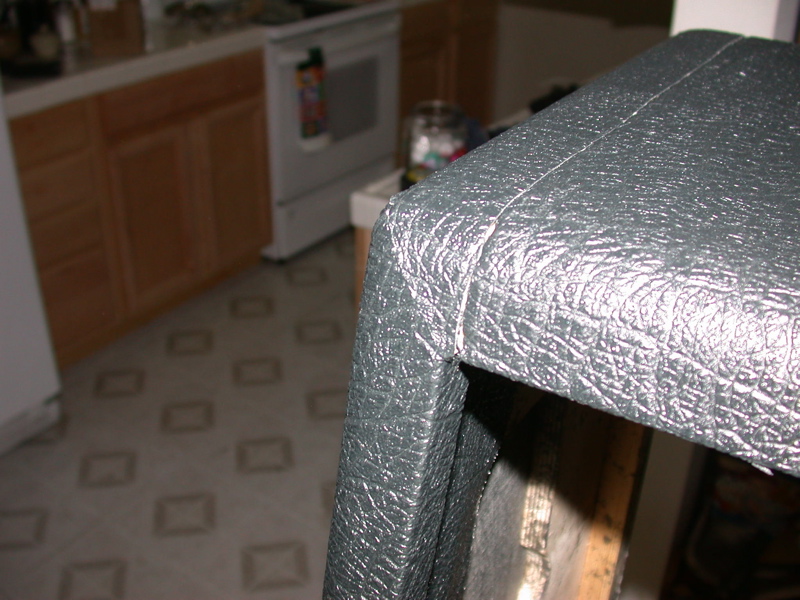 After piping is installed pic. 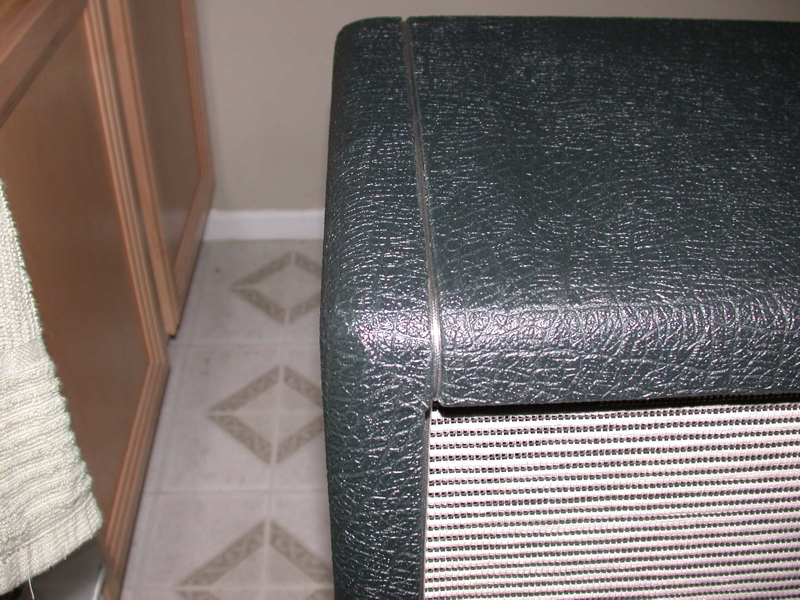 Do the other three corners the same way, and your cab should look like this cab does. 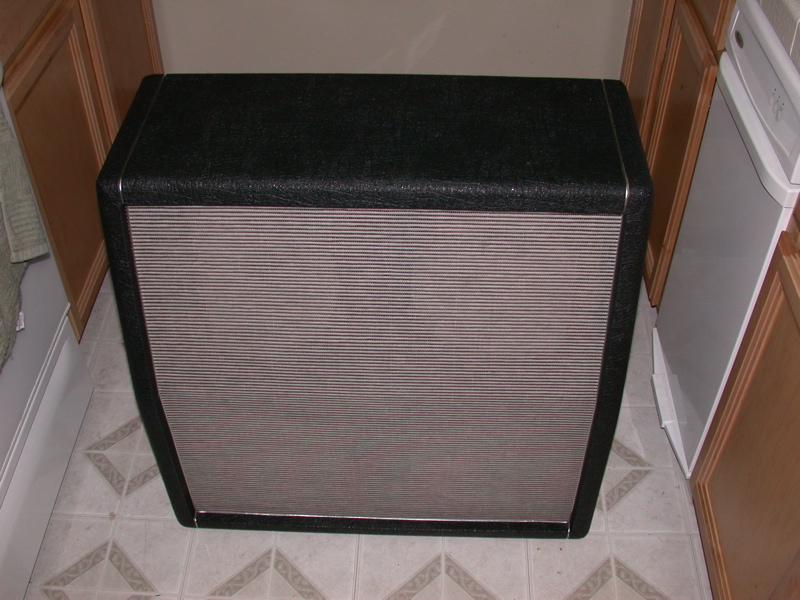 Go pat yourself on the back, and use some Crazy Glue to finish off the tolex corners where they meet. You might have to make some really small cuts back at the edge of the cab, as the tolex will resist laying flat on the rounded corner. Just make really thin, small cuts and push the tolex together until it meets just like the rest of the "seam" does on the front.
That's about all there is to it.
Last edited: Apr 24, 2012

Awesome Jim!!! Thanks for the tutorial. Now to find an old cab and "Man up" work up the courage to give it a go!
H

Approximately 12 hours of your "free" time.

Keep in mind, you can do this even cheaper if you use "generic" tolex, cloth and don't go with the more expensive gold or silver piping (go with white, and you cut your piping cost in half).

But this gets you into a cab for alot less, and it's old wood. More resonant, been vibrated to hell to make the wood lighter, etc. If money is no object, you probably shouldn't bother, just buy a new one. But if you want the old tone, you have to consider getting an old cabinet. There is something to it.

What a great thread. Thanks very much.

I plan on building one of these ground up. The corners look butt-jointed and screwed. I always thought they were box jointed.

Question...You may have covered this somwhere, and if you did, just point me to the link: how do you route your piping channels? I tried this once with limited success using the table saw blade, but I don't want to do that again .

Thanks again for the great how-to threads. wn
P