I had two GT-75s and an F-65. They were my main axes for a couple of decades. For hollow body guitars, they're pretty good. They weren't easy to play, though, as the bridge is intonated for a wound G-string.

I sold them and bought solid body Fenders and I don't miss them.

Werepossum said:
I must be an outlier here because I think that guitar is gorgeous, easily as pretty as any other manufacturer’s thin hollow body.

Did Martin actually make these or outsource them?
Click to expand...

They were built by Martin in PA. Virtually all the parts were from other companies, such as pickups (DeArmond-Rowe), Bigsby, Tuners (Kluson), pots (CTS). As to the design/body shape, they look like an evolution/copy of Maccaferri guitars, of which I believe Martin had some connection later on.

skydog said:
I had this one briefly, I believe it was called a Stinger. Nothing really special. On a level with a MIM Strat.

My 2nd electric was a Martin Stinger with a similar Strat style, but red, and with dual humbuckers.

Not mine, no affiliation - a local small shop that primarily does acoustic business had this Martin E18 listed while I was browsing their site today. 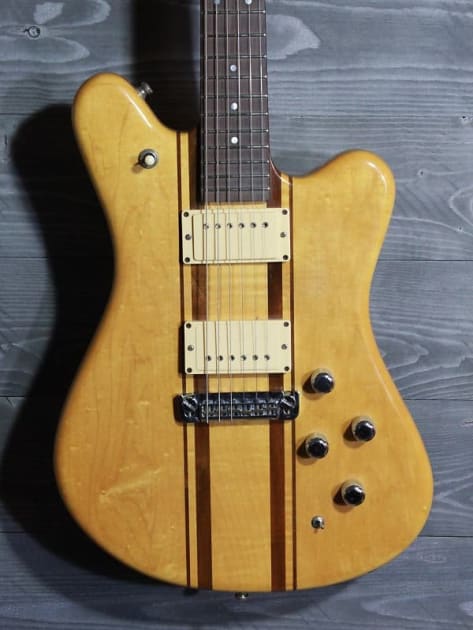 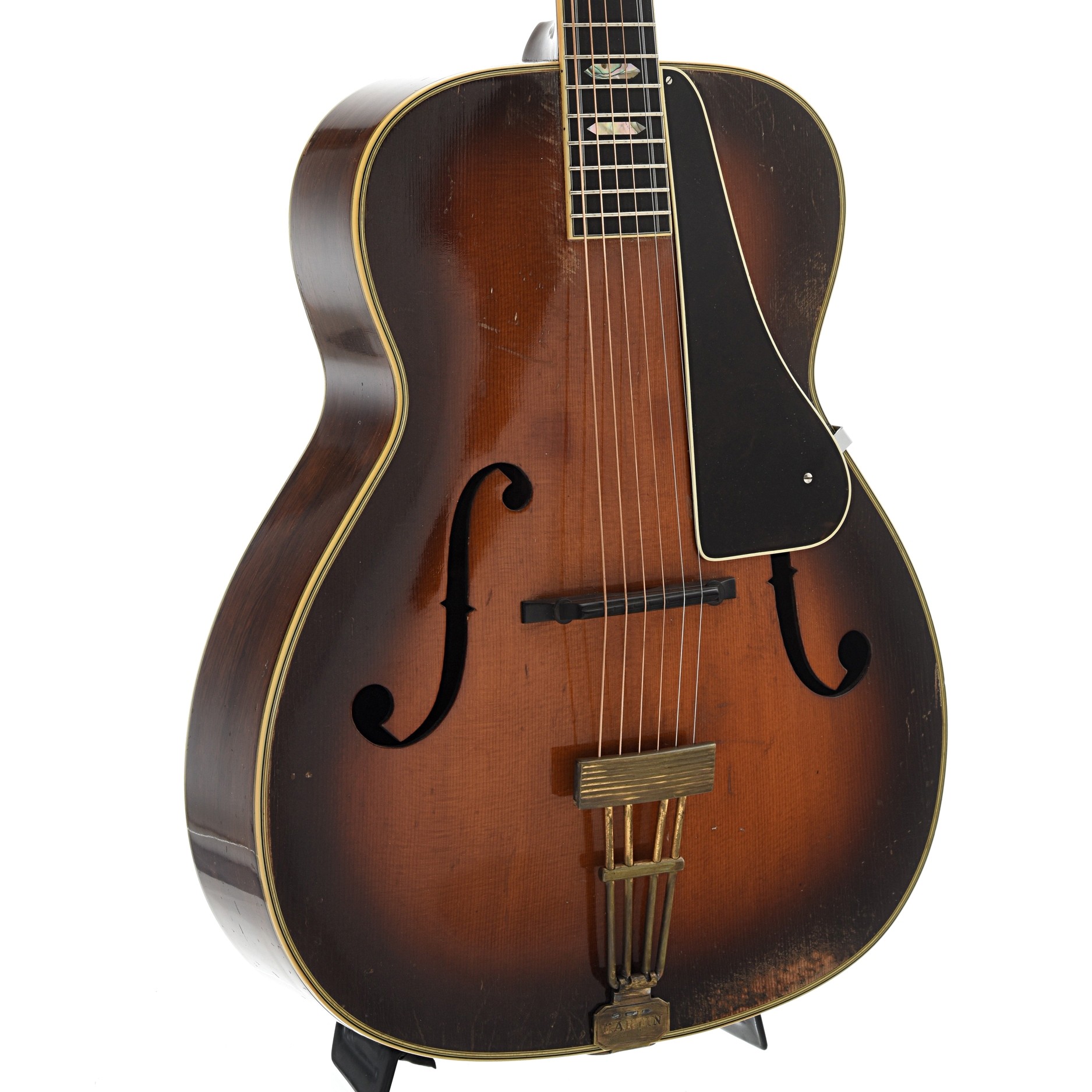 Kurzman said:
Always gotta post this. 1:56 of Rock & Roll perfection (plus a Starfire!)

I had an F-65 like the one in the video. Mine had a traditional acoustic Martin-style headstock and a trapeze tailpiece, equipped with DeArmond pups.

Why does this thread keep appearing at the top of my "Home" page and how do I get rid of it?

I really like the look of those Martins! I actually have a guitar made by this nice feller named Bobby Nelson, that was a prototype of a guitar that he was looking to make, that used that same basic design. I think it is a real looker, and then I was surprised to see those Martins, where he obviously got the design from. 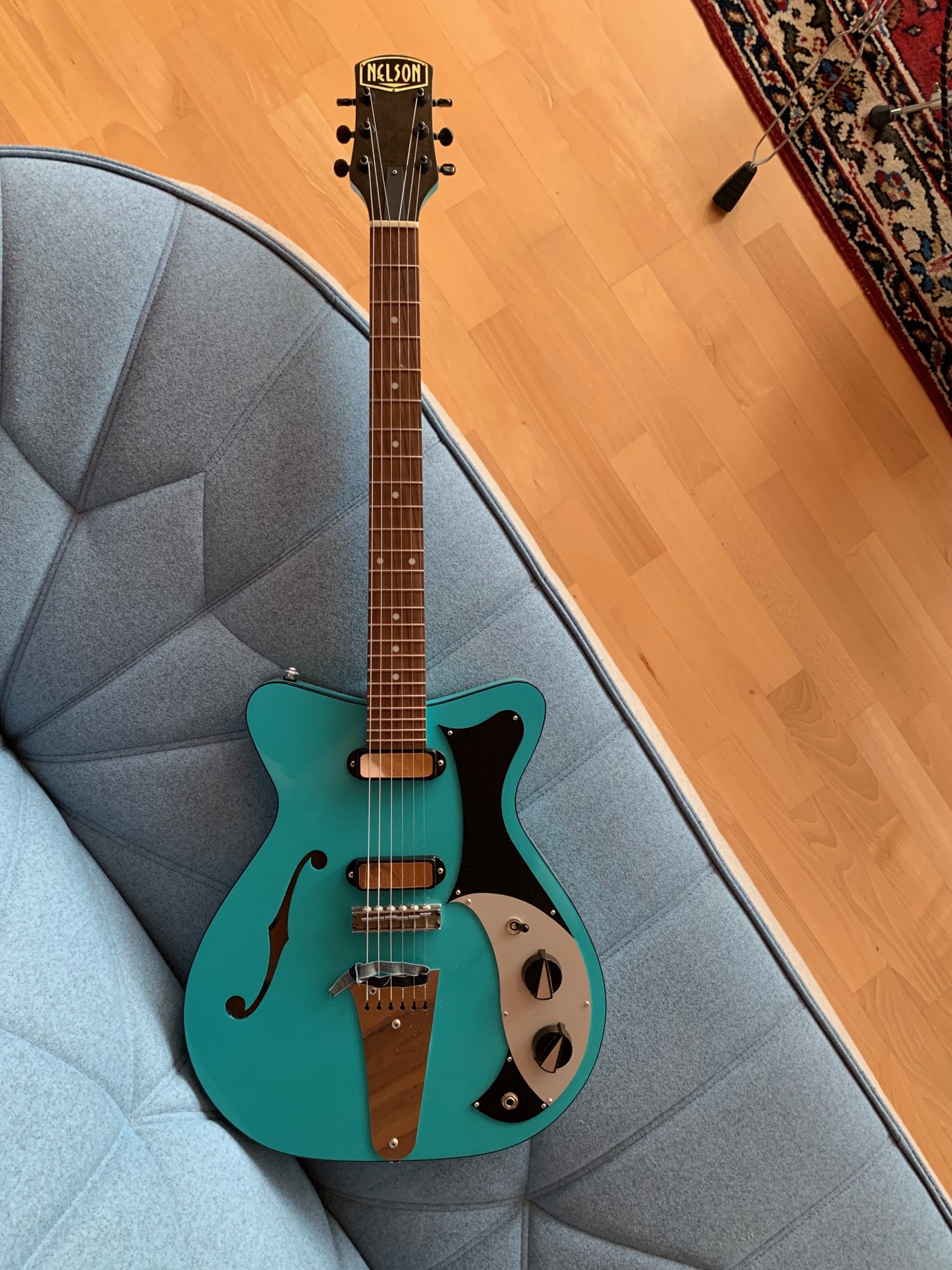 Eastwood used to make a F-65 replica. Or a copy. Or their own version.

Some years ago on one of the Gretsch forums, there was a guy with a MIJ copy of a Martin GT-75. He claimed it was a 1962, but I thought at the time it probably dated from the late 1960s. I think the brand was "Liberty", and it had a green finish. I sat in with a band one night and they handed me the solid body Martin. I liked it and always kept my eye out for one...never got one though. I thought they might be collectible eventually.

Rumble said:
Yeah, I've had a 1966 GT-75 since 1980. My first "vintage" guitar (or so I thought at the time). Put it on layaway, then got laid off from work. Almost starved to pay the damn thing off for several months with my unemployment checks! The DeArmonds on it are killer. I remember writing Martin to inquire about it, and got a reply from Mike Longworth (still have the letter). Come to think of it, in September, I will have had it for 40 years. Damn!

Dream guitar for me!

Kurzman said:
Well, considering that Sean Bonniwell played a Martin electric, it's fairly obvious that this is the most important thread on TGP.
Click to expand...

I interviewed Bonniwell several times for a proposed 33 & 1/3 book on "Turn On The Music Machine" that ALMOST got published (long story), and he said that he had always hated the GT-75, and that they NEVER played the Vox instruments they later endorsed. he said that in the studio it was always Gibson, Guild, and Fender for the string instruments. I asked if the Martin was part of an endorsement deal, but didn't get a definitive answer. Then again, his memory was, let's say, "selective" sometimes, and when I interviewed Doug Rhodes, he suggested that Bonniwell was funny and engaging, but that I shouldn't believe everything he says because "he makes a LOT of stuff up."
J

I have a black '66 GT-75. It is the most sonically dynamic electric guitar I own in my opinion ('65 Rick 365, '72 Tele Thinline, '73 Guild S-100, '62 Silvertone Jupiter, 2019 Knaggs Kenai J), although the sustain could use some improvement--no center block as mentioned above. The guitar takes amazing to pedals, and has great tonal variety, which I think probably comes from the Dynasonics as much as the build quality. It does tend to feed back when stage volume gets to be too much, but nothing an old pair of socks stuffed into it can't fix.

Really the best thing about the guitar, however, is that one can play it unplugged when being nagged by their significant other for being too loud, and it still definitely has the feel, and even sort of the sound of a Martin.

Interesting that these guitars get so much shade thrown at them regarding looks. Obviously my bias has already been established...that said the best aestetic comment I recall about them (or at least the GT-75's in particular) was a comparison of its shoulders to a young Lauren Bacall's in an article in Guitar Player, which I have to agree with.

Rumble said:
Some years ago on one of the Gretsch forums, there was a guy with a MIJ copy of a Martin GT-75. He claimed it was a 1962, but I thought at the time it probably dated from the late 1960s. I think the brand was "Liberty", and it had a green finish.

And here's another MIJ copy...although a bit different:

Yeah, that's a pretty cool take on the design. Some killer playing too!
K

Not mine, but since this thread popped up in my "feed" for whatever reason like it did for everyone else, I figured I would share this 12-string:

Mike Dugan's a great player - first saw him when I was about 14 (34 years ago!), and he's still tearing it up on the local circuit here.
V

My friend Jack Hardy had one. I played it once or twice and loved it, it was one of the semi-hollow ones, like a 335. Really nice sounding unplugged.

Skip Spence from Moby Grape played one, I think. I could swear there's a picture of him playing one on the back of the first Moby Grape record.

F-65 in Seattle for sale, check out that clear bridge, looks like Guild knobs without labels.

100% original 1964 Martin F65. Immaculate and rare example of what, in my humble opinion, could be...
seattle.craigslist.org

I just got a '66 GT70 a few months ago. I've wanted one for ages because of the movie "Six String Samurai." It's a very cool guitar, fully hollow, with the best looking pickups ever. They sound damn good, too. I swapped out the Bigsby bridge because it sucked, and replaced the butter knife with a Chet arm for the same reason. My only objection to the guitar is the amount of 60 cycle hum, the middle position does not seem to be RWRP, and the pots are a little crusty. Other than that, it totally exceeded my expectations. My logic of, "Martin knows how to build a guitar" and "Dynas + hollow + Bigsby is a wonderful recipe" turned out to be bang on. Sounds like a cross between a Duo Jet and a 6120 with Dynas, but uses the much more efficient Gibson control layout. Yes, the neck is narrowish, which I also expected, but it's super comfortable to play.

That Brazilian headstock veneer is a nice bonus. Its only downside is that the knobs only go to 9, and I reckon that's why they never caught on.