Monster Pedal! I waited way too long to get one!

I heard an online demo of the Supa-Boost a few weeks ago and was def impressed. It might have been on That Pedal Show and their episode which was all about boosts and their various possible uses. I think I watched some other demos online and really liked what I heard.

It was also on That Pedal Show that I first heard a demo of the Saturn VI from Spaceman Effects. Dan and Mick featured it on one of their “Pedal Jams” episodes in February, and I ordered one immediately. Coincidentally, they featured the Saturn VI again on yesterday’s episode entitled “5 Pedal Builders You Should Know About”. Was great to see Spaceman featured on the show!

Question... how do the Supa-Boost and Saturn VI compare? Does anyone have first-hand experience with both pedals? I really like the Saturn VI as a clean (and pretty transparent) boost, and I keep mine with the boost knob at around 3:00 or so, and the gain knob down around 9:00. The Saturn VI is billed as a “harmonic booster”, with the boost and gain knobs apparently controlling even-order and odd-order harmonics somewhat separately.

Any other differences that anyone can speak to? I’m a sucker for a good boost pedal, and while I absolutely do not need another one, my GAS-related symptoms are flaring up as I read through this thread!
B

Got a Supa Boost last week from the new run. It sounds great! It has taken the spot of a Timmy on my board.

I use a Timmy as a boost into already dirty British amps with the volume around 3:00 and the gain around 9:00.

The Supa Boost sounds really similar to my ears with the gain around 1:00 and EQ to taste. However, the Supa Boost just adds a little something extra: control over the mids to add warmth if you want it, more harmonics on the lower strings, and more clarity. It just sounds more ‘real’. It’s hard to describe.

I thought I needed a boost and an OD, but the way I play, I’ll be fine with just the Supa Boost.

bradtfw said:
the Supa Boost just adds a little something extra: control over the mids to add warmth if you want it, more harmonics on the lower strings, and more clarity. It just sounds more ‘real’. It’s hard to describe.
Click to expand...

Glad to hear it's back in production and shipping. I bought mine thinking it'd be a boost I'd switch on and off. You fooled me George. Always on and first in the chain. 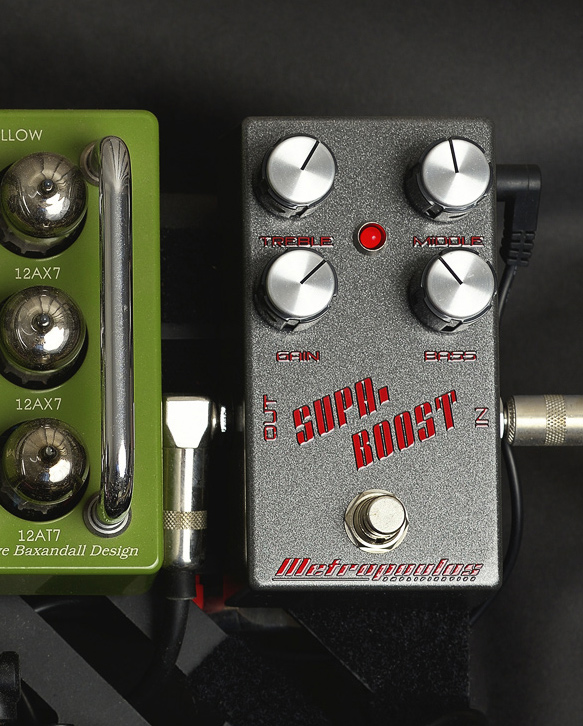 I know it's a boost more than an OD, but could it help impart a JTM/Plexi vibe to a '68 DRRI?
B

That may depend on how clean/quiet you set your DRRI, and how loud you want to get. If your volume is set low, then you may not be able to turn-up the gain on the Supa Boost enough to get the full effect.

I use it with my Hiwatt with the volume set at the edge of break-up and the master set high, and it definitely gives it a lead-spec Marshall vibe without a huge jump in volume since there is little headroom left.

superfast11r said:
Anybody try one on a Supro Black Magick?
Click to expand...

This pedal is ****ing incredible. It turns my Marshall SV20H into a rocking beast, and just sounds so damn good and fat. Still have lots of testing to do but so far I'm blown away.

Yeah that sounds about right.

I will say no. This morning I plugged it into my vintage 1966 Fender Twin and although it sounded AMAZING, it did not turn my Twin into a marshall; rather it gave it more bite and of course a great boost. If you want to turn your DRRI into a Marshall, I would reccomend the Lovepedal JTM but even more so the Bogner Blue Ecstasy. It turns my Fender Twin into a Marshall and it has a boost as well which is cool.

Yeah I gotta say no too.
It's not a Marshall in a box or sound alike.
It's a well designed boost geared toward boosting a Marshall 1st and for most by the guy who probably knows more about the Marshall sound than anyone.
But it is really just a good design that works really well across the board.
At least for me so far.

I am not sure if the built-in boost in my Metropoulos DVL-1 is closely related, but that amp in the '65 mode with a little boost is pure bliss to me. I am a happy customer! I find most dirt pedals detract rather than add to Marshalls and clones like Metropoulos. Not so the Supa-Boost. Perfect for amps already kicking it to get into that next level.
S

Sent From My Telecaster

Great pedal Does something different from rest of the pack. Definitely in boost camp. Metropoulos video describes this accurately. Marshall leaning but not OD — really feels great under hands. Ran it through ‘67 Super —- it did not turn Fender into a Marshall, but loved what I got noon up on gain, with all 3 EQ straight up middle. Keeping this pedal. Strong feeling on this.

It’s a boost, which is why it’s intriguing.

Just got one of the new run...sounds awesome with my Superplex (when I don't want to bring the bigass footswitch for the amp's boost) and Germino 2204.

side note - if you play heavier rock styles and your bass player uses an SVT or similar tube amp, the Supaboost is KILLER for bass as well.

Supa Boost is one of the best finds ever to pair up with my Suhr SL67 (so I'd assume it's ideal for any Plexi style Marshall build).

It works especially well with P90s or Humbuckers where you don't need a lot of saturation...just MORE! Many shades of MORE...
S

I've had mine for over a year now, and no regrets ..Not 1 iota..I use it in conjunction with my 20 watt plexi and Friedman Pink Taco , and it truly is still your amp, only better!. I really like it at low volumes to make you amp sound bigger. I run my plexi into an attenuator for 1 level of snarl, then kick in my Supa boost for hyper space, but in a good way, because even at that it's still my amp sound..I have an out of town friend visiting for a few days tomorrow, and I can't wait to show him it..He uses a Vox AC30, and although he's not bringing it with him, I suspect he may want to run out and get one once he's back home..I've been recording collab videos lately, and for those I've been using my Kingsley Tube pre amps direct in, and that chain is seperate from my amp set up and I use a Koko boost for that chain..I have yet to try my Supa boost with my pre-amp pedals, but I'm sure it would sound great with my Kingsley Constable (JCM 800 style pre)..Folks, this pedal is a winner!
You must log in or register to reply here.
Share:
Facebook Twitter Reddit Pinterest Tumblr WhatsApp Email Link