OK, I'm a fan of Princeton's and DRRI's in particular, but wasn't bonding with a '68 Custom Princeton I had had for a little while. I traded in for this new '65 Reissue with a Heritage G12-65 12", Pine Cabinet, and Tweed covering at GC a few days ago, and wow, does this amp absolutely kill.

Had enough headroom to gig with my 4-piece indie rock band (playing it out at a club tomorrow night, but it was awesome at rehearsal last night), even though I like / don't mind a little bit of grit on my base/clean tone. The reverb is absolutely something out of heaven, and while I use a TR-2 for trem on my board, the built in trem is fantastic and not overpowering in a good way, so can be used to just mildly enhance some clean tone work in particular. It's pretty light, so the perfect practice, recording, and gigging amp for me (can mic when needed but probably won't need to).

I haven't seen much said about this particular Princeton '65 (obviously endless threads about the normal '65 PRRI, and also some about the GC Bordaeux Princeton), so wanted to share that it is an amazingly good amp. Love the pine cabinet, too.
Last edited: Jan 9, 2020
D

Enjoy NAD !!
They had one at GC here , I looked at the back and saw the speaker and thought it might be cool. 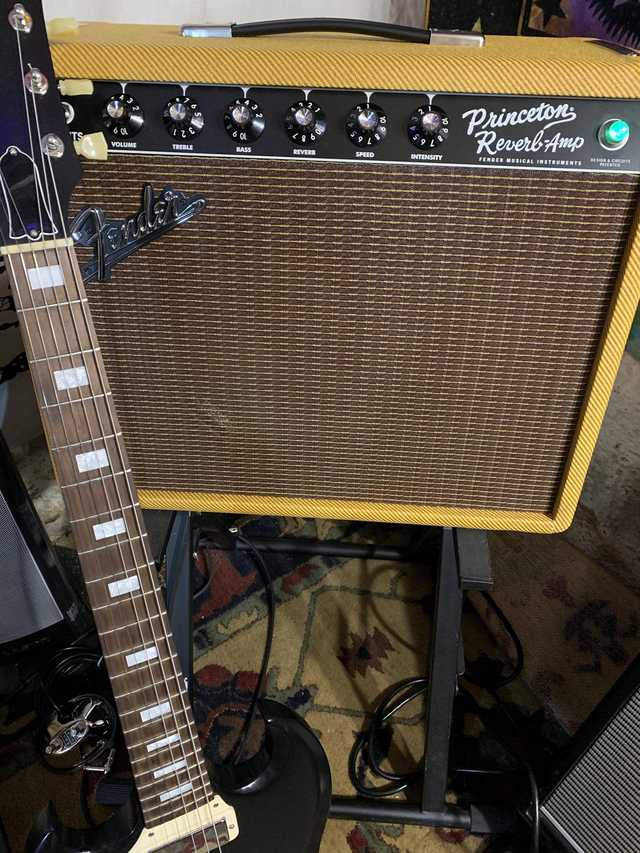 Here she is ... Speaker Cranker and TC Spark have this baby growling. Had a green jewel light lying around so thought it would be fun.

DV52 said:
Enjoy NAD !!
They had one at GC here , I looked at the back and saw the speaker and thought it might be cool.
Click to expand...

Yeah, it caught my eye at GC, too ;P The speaker is fantastic.

Yeah these are amazing.

I went with the Bordeaux because I preffered the Jenson for the Classic Fender combo, can get Ice picky...but its part of the American Flavor. But for those who think a Princeton may be to Treble heavy these are an excellent alternative and well worth the extra 50 bucks vs the Bordeaux.

Enjoy man and looks classu with tweed and green jewel.