I had a ‘57. Sold it to a friend about 33 years ago. He loaned it back to me in the 90s. It was my main gigging and recording guitar played through either a ‘58 Tweed Deluxe or Seymour Duncan Convertible. It was in perfect condition then.
He sent me pictures of it recently with a possibility of getting it back. It’s been played by his son and shows serious wear on the headstock. The body seems to have excess sweaty arm schmutz.
Waiting on a price.
D

What a great find - you're STOKED!

I have yet to play a bad sounding stock vintage LP Junior. I've preferred some over others, but never once have I played a vintage LP Junior that I thought didn't sound good enough to gig with, double or single cut, red or TV.

Hiwatt Bob said:
thanks bros. I tried to record a quick demo--but I've been out of the demo game for quite some time, so I apologize for the low volume of the talking mic. hopefully at least the guitar comes through alright.

The most impressive part of this video is that you have two Synthi AKS units. Cool guitar too, though.

Back when I was a kid I found this hanging in a small music store in Gainesville FL (not Lipham's) and the salesman pushed it by claiming he thought Duane might have owned it (he should have been a car salesman) When I found it the original TV white was gone and it had been refinished in varnish so it was brown mahogany color. Back then nobody thought about ruining the value of guitars by changing finishes and parts and I had a job so I threw some money at it when I saw some inlay work done by a local luthier.
1958-59 TV Model - sunburst nitro finish, tomato vine neck inlay, neckid girl on headstock made of piano key ivory and pearl. Badass bridge, blue Bournes pots, Sabine installed Grovers, brass nutt, Dunlop jumbo frets. On the plus side it plays really well and sounds great. It's probably a good fit for some new country picker now.
Click to expand...

A little Sabine history:
Sabine Music in Gainesville FL was known for retrofitting guitars with Grover tuners and eventually came up with a fancy electronic tuner that was all the rage. Back when I used their tuner changing services it cost about $20 for a new set of chrome or nickel Grovers installed. I also remember hitch hiking from Sarasota to Gainesville to drop off my Jr. for a set of nickel grovers and picking it up the same way. Times were different. 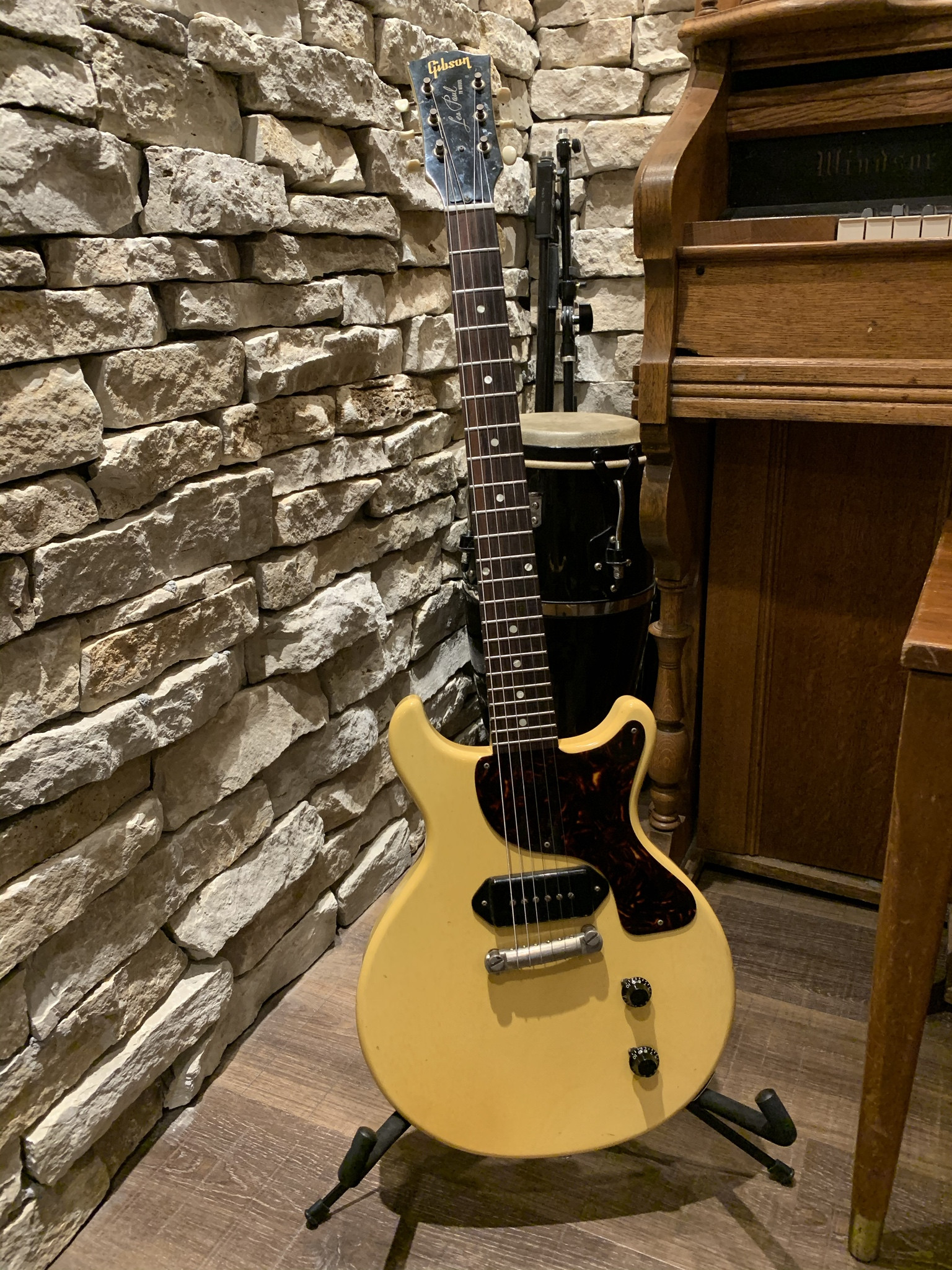 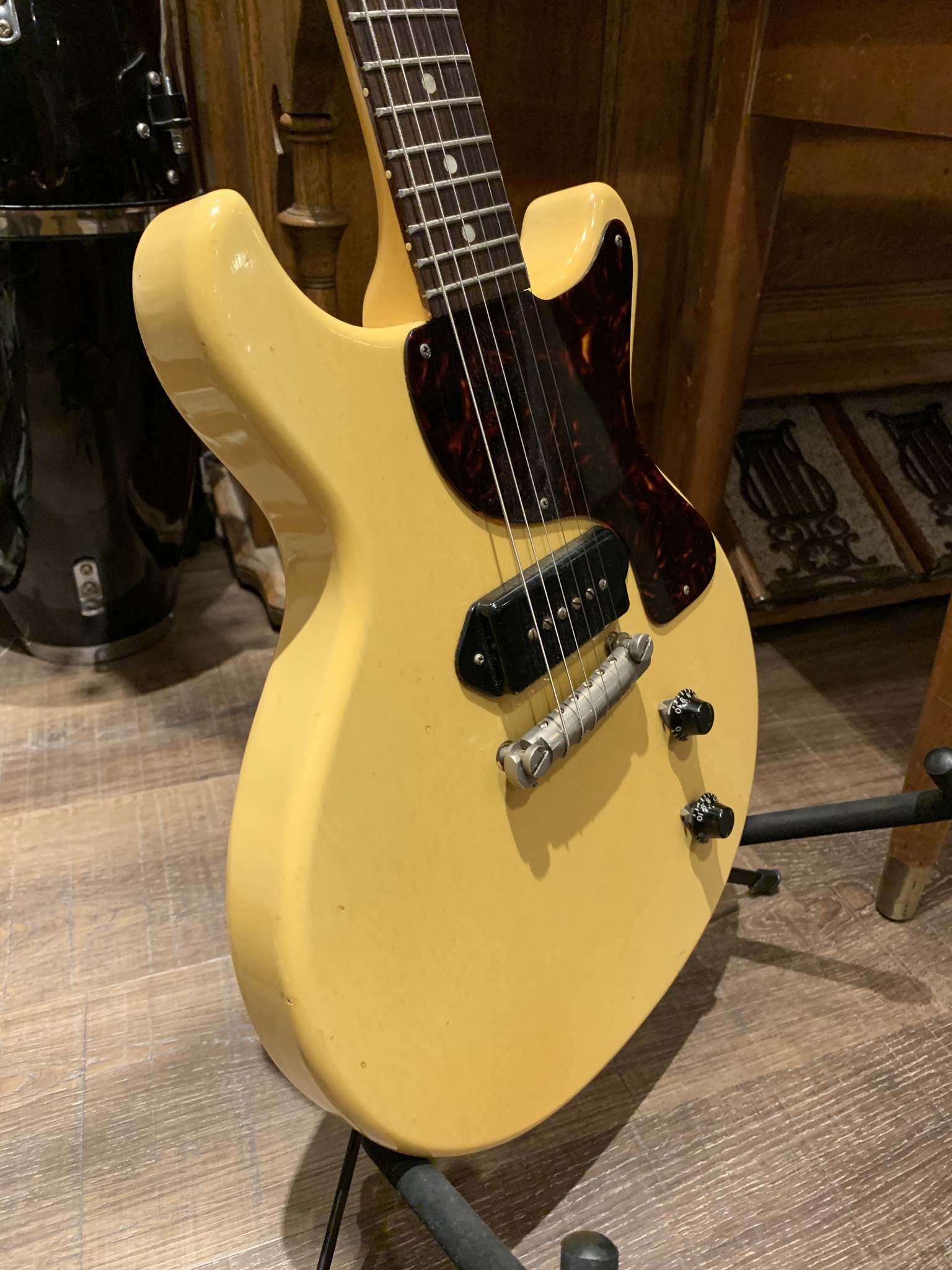 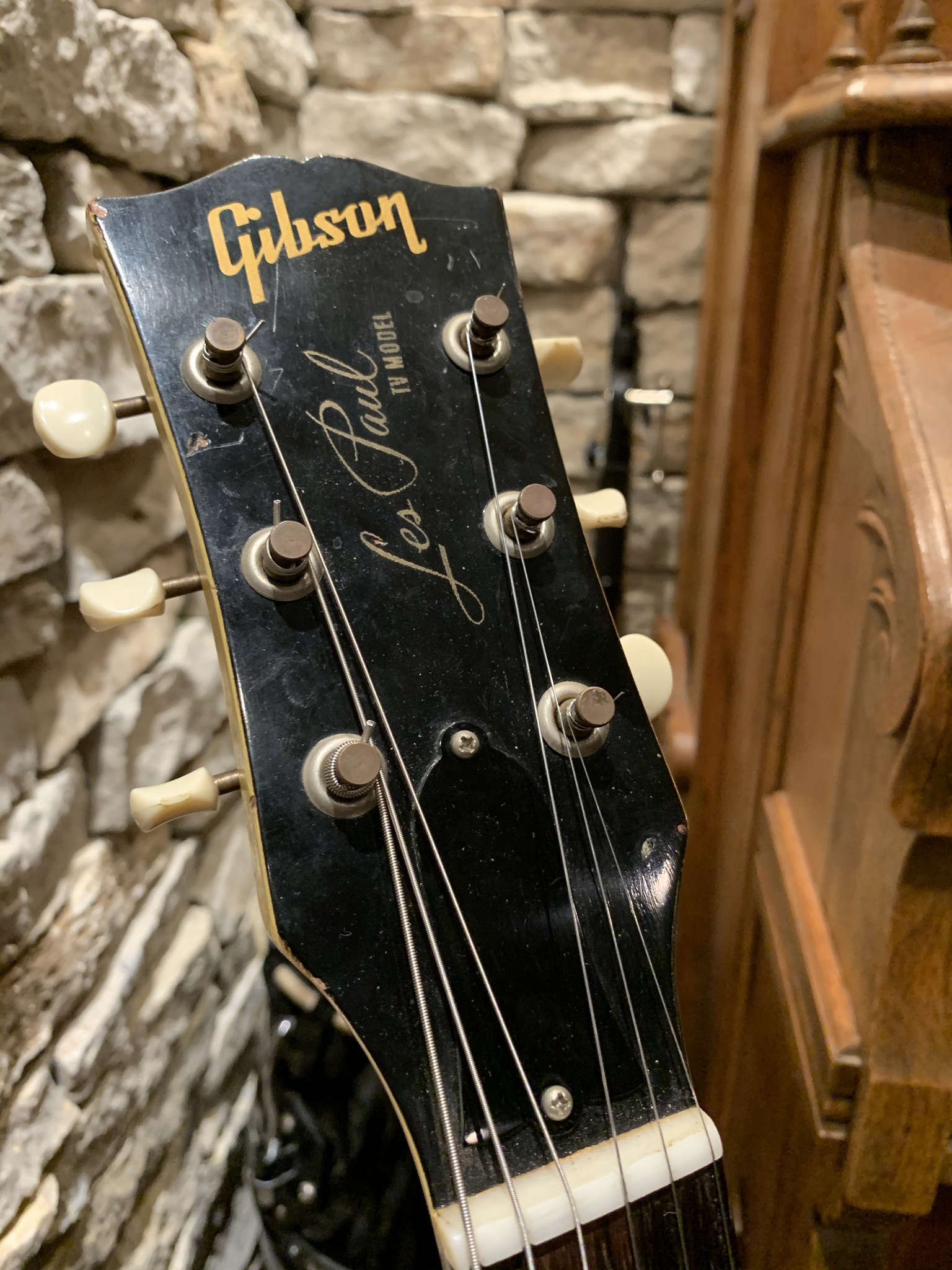 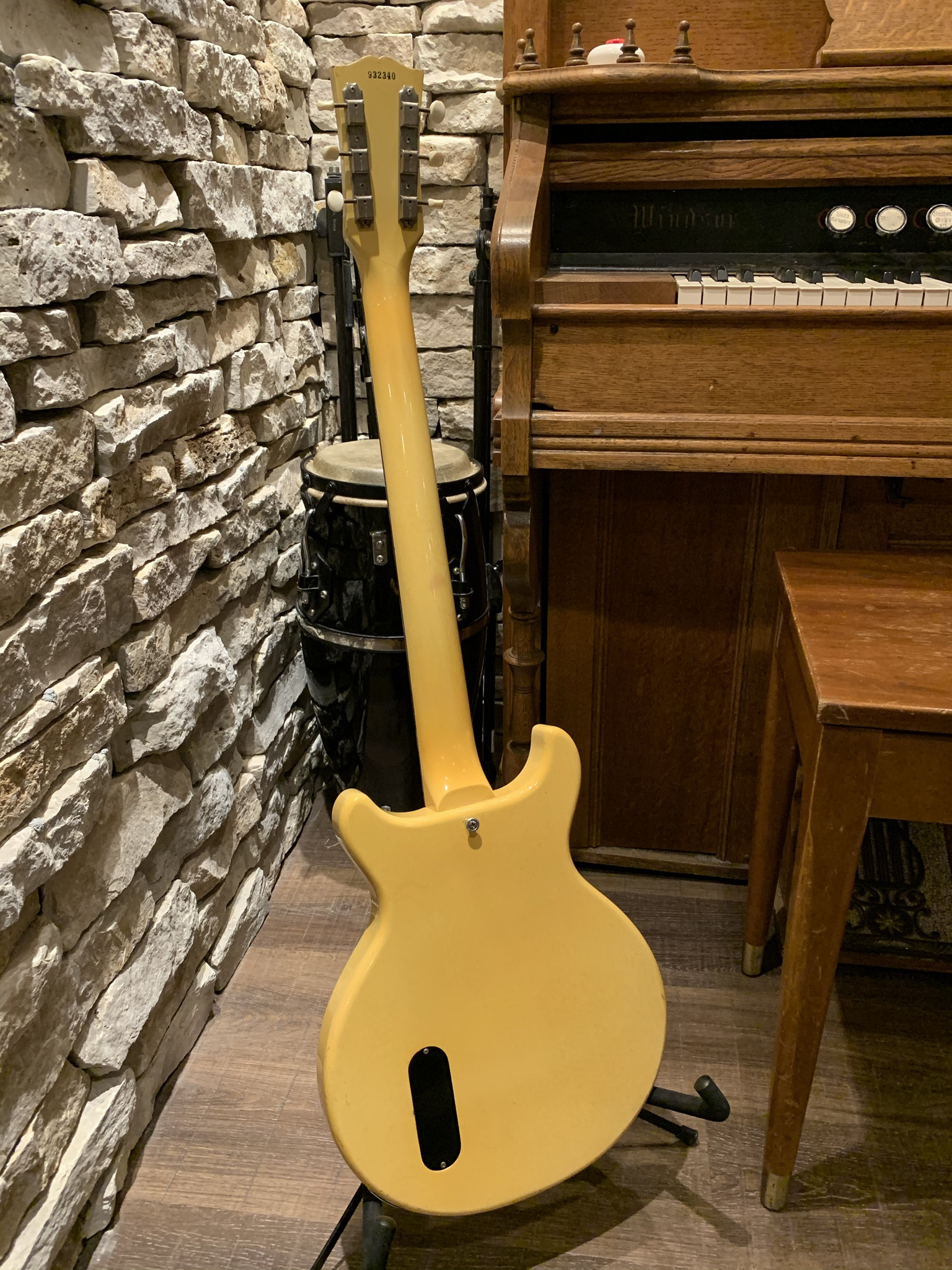 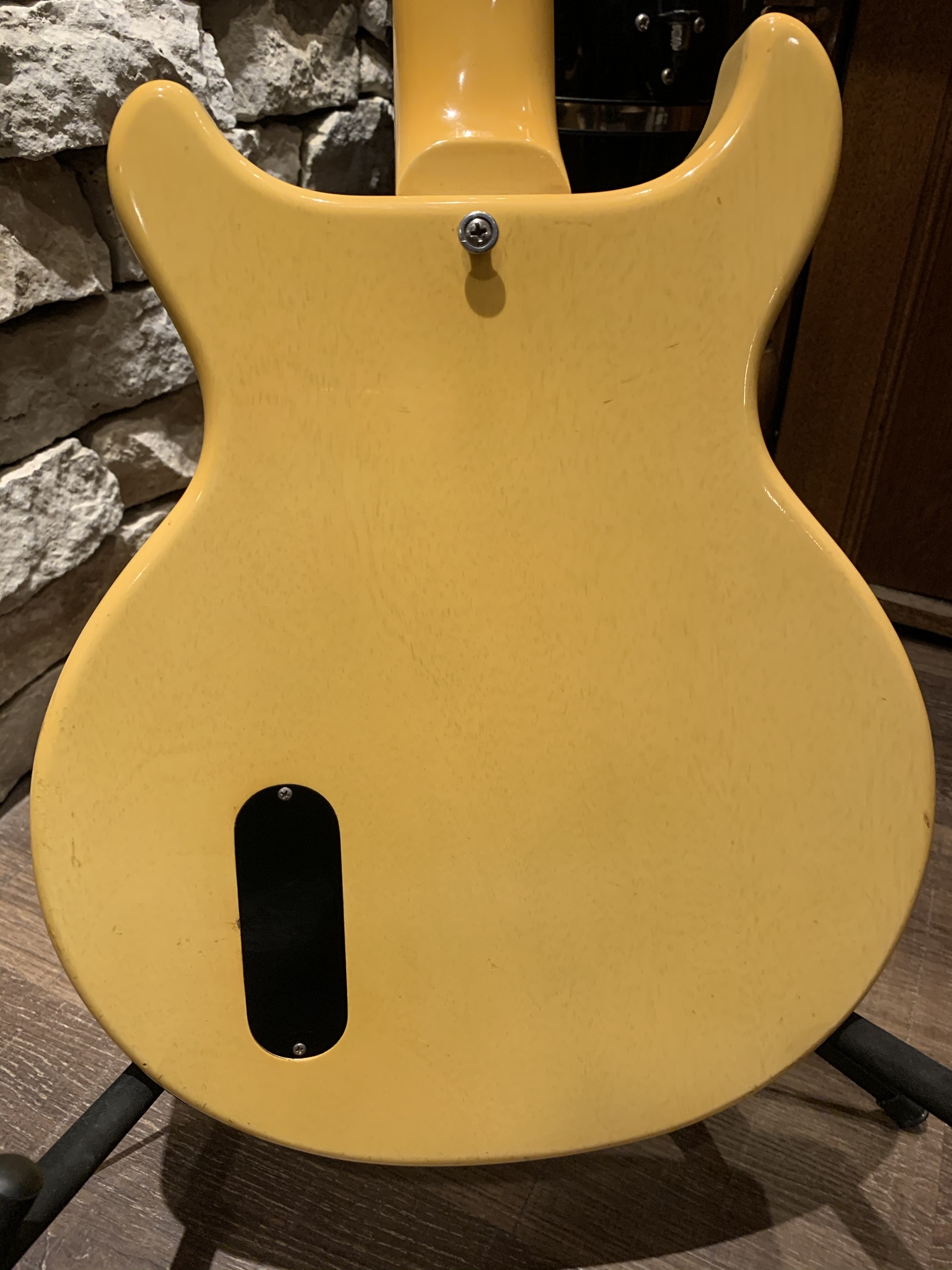 That there is the famed "banana yellow!"

yucatown said:
The most impressive part of this video is that you have two Synthi AKS units. Cool guitar too, though.
Click to expand...

indeed! I’ve got some vids on my channel doing songs with the AKS.

Hiwatt Bob said:
indeed! I’ve got some vids on my channel doing songs with the AKS.
Click to expand...

yucatown said:
Very cool. I have a hi fli but no AKS...yet.
Click to expand...

Jealous. always wanted a hi-fli. but I've been playing direct into amps with very little effects for quite a while now, so there's no way I could justify it anymore (especially with prices they're commanding). maybe someday.

Great guitar, what a sound. It is hilarious to think that when these were first made, Gibson envisioned them as gentle country pickers for people learning how to play the guitar....

Hiwatt Bob said:
Have wanted one for a while...finally got one. All stock. The neck is perfect. The toanz are amazing. 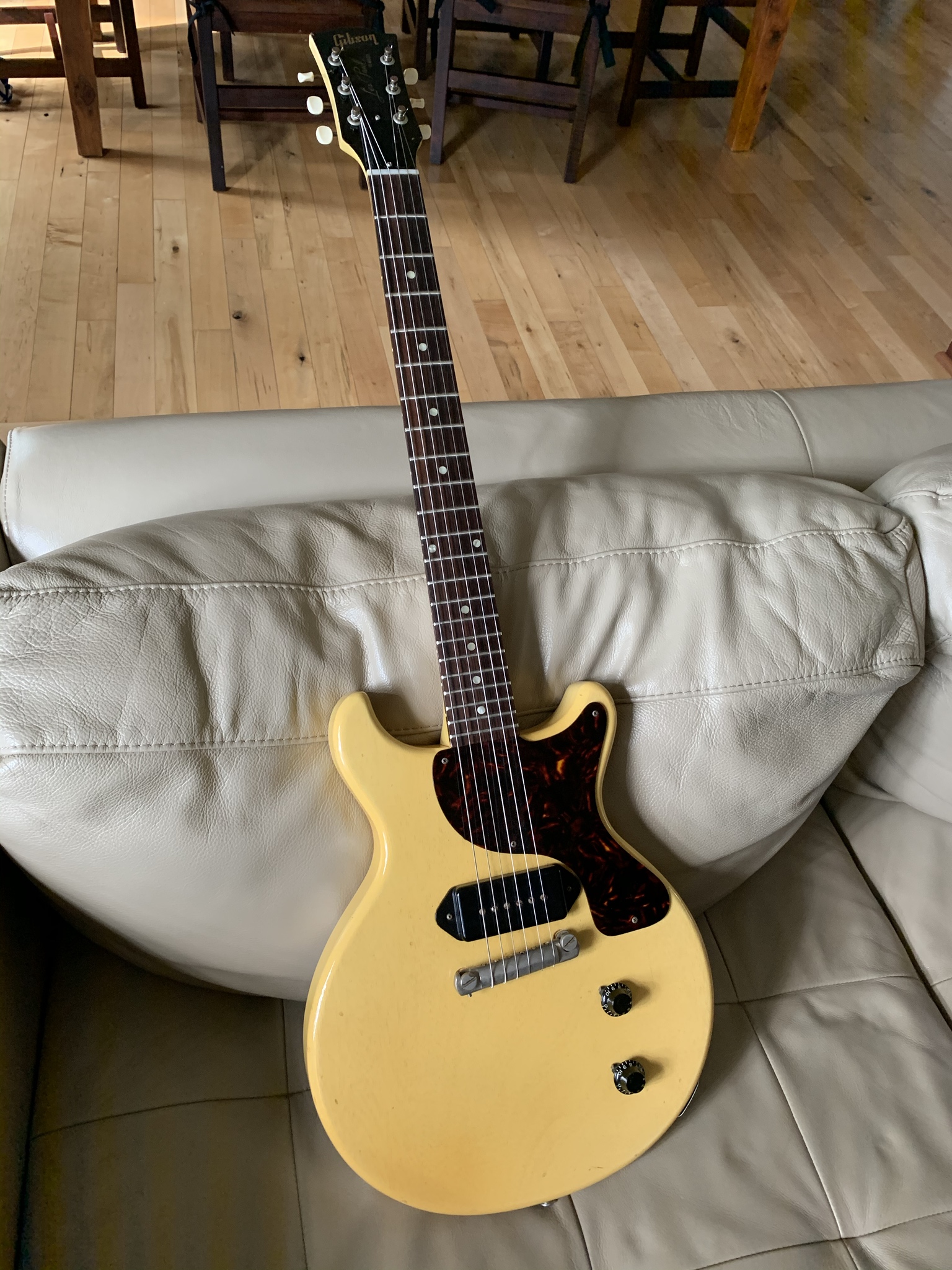