The family of one of my close childhood friends is moving out of their home next month. My friend's father had sadly passed a few years ago - he was a guitar enthusiast, and much of his collection had been left untouched in the basement since his passing. Given the need to clean out the house, the family elected to give his guitars to "people who would play them", as he would have wanted. I was lucky enough to make the list.

I was presented with four cases, the guitars inside unknown. One would be mine. After inspecting the guitars, we had the following: a black American Standard Strat, an Epi Sheraton, a '52 RI Tele, and a red Clapton Strat. I had been informed that a prior player had plugged in the Clapton, and it "hadn't made any sound".

As I own a Heritage H-535, the Sheraton was out on sheer redundancy. While I LOVE Teles and an ash/maple board '50s Tele would be a great complement to my alder/rosewood '60s style K-Line, I really couldn't vibe with the 7.5" radius and narrow nut on the '52 RI. That left the Strats.

While I preferred the look of the black/mint guard American Standard, the Clapton immediately stood out. The neck is amazing - soft-V neck, satin finish, and 9.5" radius. Despite having what were at least two year old strings, the guitar had the best unplugged sound - nice snap and pop on the wound strings, no dead spots, and balance across the fretboard. It seemed to have been barely played; frets were perfect, strings were shockingly fresh, and the plastic was still on the pickguard! Here she is: 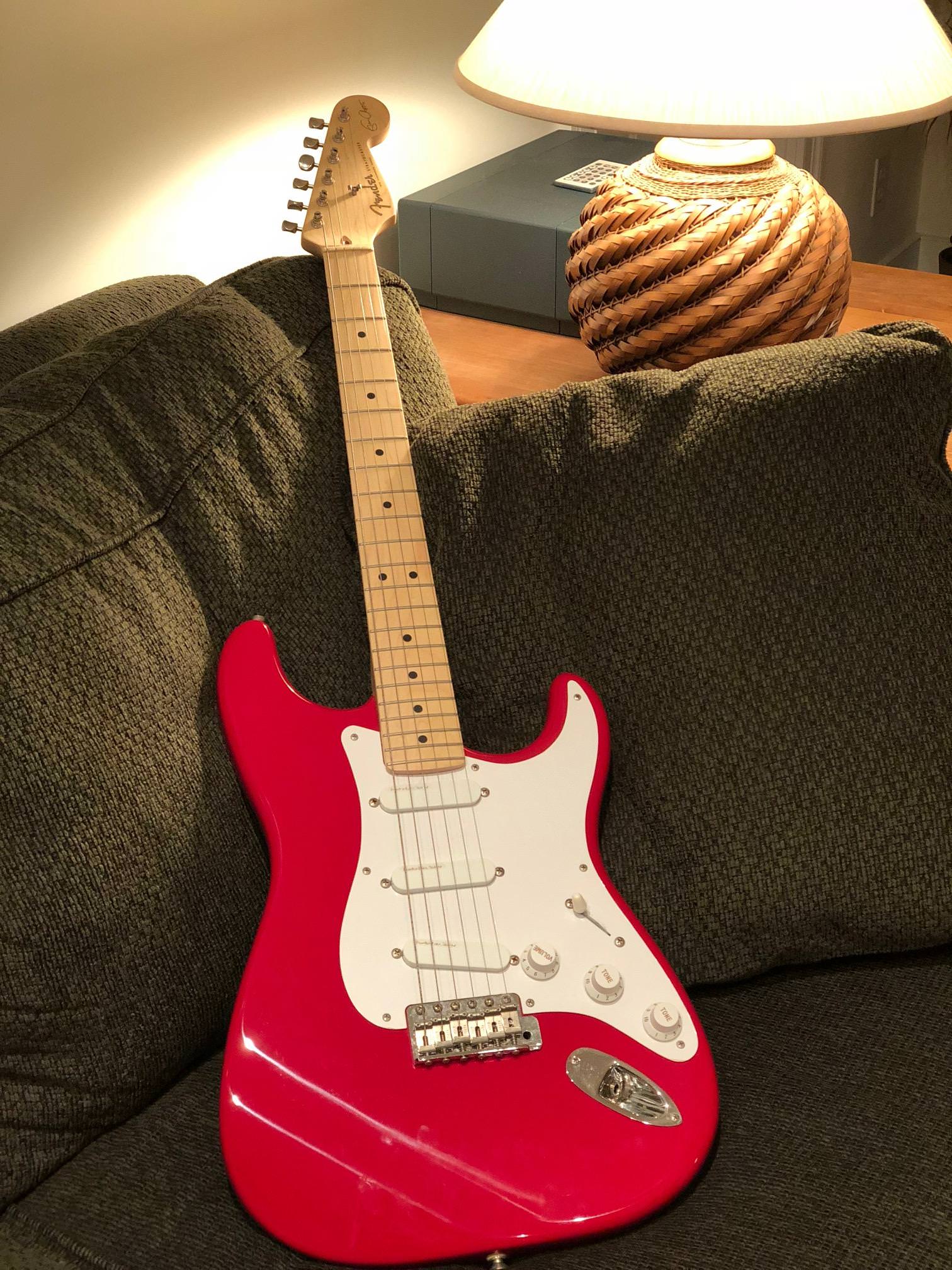 Now to the interesting part. Knowing the EC Strat has active electronics, I figured there was a decent chance the "electronics issue" was a dead battery. Upon popping open the backplate, I found a Duracell with a use-by date of March 1997! It seems this guitar was barely played over the last 20 years.

I'm going to give the Lace Sensors a spin (I won't be home to my rig until the New Year), but I've never been a fan of active electronics and I'm guessing I'll end up gutting them. Here's the fun part: I was thinking about placing an order for a '54 2-tone Danocaster this year. What cool pickup ideas would you suggest? Anyone know if these ECs are swimming pool route?

In any case, generous gift, great guitar, and a fun pickup project ahead!

Leave the guitar original and just play and enjoy it! It's a beauty!

Keep the pickups......its always nice to have some humbucking single coils

An IR Vendor who opted to go for Gold this year!

I don't revere EC and I am not really a strat guy, but the EC strat is a great sounding guitar with its stock electronics.

The Lace Sensors are ballsy and don't act like RF antennae. Bridge pickup will not make your ears bleed. The active boost is nice and useful.

Give it an honest go with the stock electronics and you may become a fan.

Congrats on a fantastic score. I like the Lace pups with the active boost myself.

I have a 1997 red Stratocaster plus with the same gold lace sensors w/o the active boost. Great guitar! Very similar to yours in many ways. The fellow I bought it from got it and met his future wife the same week. He never learned to play it and it sat under a bed for 20 years til they were moving. It had the plastic wrap on it too! Wish I had an EC too!
D

IMHO, you should keep the lace sensor setup. It is a very versatile setup, the guitar looks mint, and it will open some new tones for you. My advice for whatever it may be worth, don’t mess with a good thing. Torino Red Clapton Strats with Lace Sensors have become a bit rare, especially in that condition.
Last edited: Dec 27, 2017

detroiter711 said:
IMHO, you should keep the lace sensor setup. It is a very versatile setup, it looks mint, and it will open some new tones for you. My advice for whatever it may be worth, don’t mess with a good thing. Torino Red Clapton Strats with Lase Sensors have become a bit rare, especially in that condition.
Click to expand...

I'd say this is great advice.

Keep it as is. I think the Clapton Strat in red is quite rare and if kept original it could well increase its worth.

I would leave it stock and just get a nice set up done per your style.
Congrats!
P

It sounds like there are some fans of the Lace Sensor/TBX/mid-boost setup, so I'll have to give it an honest chance before I consider any changes. Unfortunately the 20-year old battery essentially fused itself into the battery harness, rendering it unusable, so I'll need to do brush off my soldering skills and install a new harness before I can get her up and running.

The setup on this guitar is great, which is shocking given the time in case. Wouldn't change a thing. I usually like a slightly larger fretwire, but slides are super easy with the small frets and I haven't run into any issues fretting out thanks to the 9.5" board.
P

And I definitely do get the point that the Lace Sensors are an integral part of what makes a Clapton Strat a Clapton Strat! So I can see leaving the stock setup as a cool alternative, particularly if I have a more vintage-spec Strat to pair with it.

Presc said:
Unfortunately the 20-year old battery essentially fused itself into the battery harness, rendering it unusable
Click to expand...

Any chance of just using some variant of DeoxIT and letting it soak a bit. I'd think that would be worth a shot before surgery.
G

Congrats on the NGD, enjoy the hell out of it and think of your friend’s Dad from time to time!

I have a Strat Ultra with Lace Sensors in HSS format. These pickups are underrated. I played the Strat at band practice last night, and it was just fantastic as usual. I've owned the guitar since 1990, when the first Jeff Beck model was out, with the baseball bat neck. They both had the same pickups, but the Ultra had a modern C neck. So I saved about $1000 dollars by buying the Ultra. No active circuit on mine, but Beck didn't have a need to Gibsonize the guitar, like Eric did. AFAIK the circuit adds boost, which to my ears is a lot of midrange. I just get a Gibson out to get that sound. The Lace sensors are pristine and sound very Fendery, especially the Gold ones. I have Red dually bridge and blue neck which are high output pickups. They are very clean. Still loving this guitar; I have a 1970 Strat with the noisy 69 pickups.

I think the battery holder could be replaced, but get a good tech to do that. Most of the schematics for the Fenders with Laces have been destroyed or 'lost', due to contractual agreements between Lace and Fender, which ended in 1999.

A lot of people end up butchering the Strat Pluses and Strat Plus Deluxes from the 90s. Which is a shame since they are very well designed and very well made modern style instruments. Better to have one of those and a traditional 50s style strat.

I have my laces set pretty much like std SCs height. It's confusing because the owners manual says height makes no difference in tone. So for years I had them very low like 4 nickles with the last fret fretted..
When I raise them to 2 nickles it made a huge positive difference

Leave the lace sensors, they have a great sound to them. I especially love the tone in the neck position.

TELECOLLECTOR said:
Any chance of just using some variant of DeoxIT and letting it soak a bit. I'd think that would be worth a shot before surgery.
Click to expand...

Thanks. Unfortunately the the whole harness sort of fell apart. In addition to the terminals on the old battery pulling off the battery itself and sticking to the harness, the solder on the harness came off. So it's just going to be cleaner to replace it - seems like an easy job, even for my hack skills!

My friend is actually getting married this weekend and I'll be playing fingerstyle acoustic instrumental for the ceremony/proceedings. Should be a nice way to pay tribute as music is important to the family.
You must log in or register to reply here.
Share:
Facebook Twitter Reddit Pinterest Tumblr WhatsApp Email Link