I'm a wordy guy and this is long - sorry.
The TL;DR version is that I like it a lot.


As I have posted previously, I have a sweet tooth for travel guitars. I don't know why, exactly, but I do, and I can now add one more to the list: a Fernandes Nomad / ZO-3 Deluxe. I recently found one on eBay that was flying under the radar due to a spelling error, and I was able to pick it up for a good price.

Fernandes Guitars of Japan has been making versions of the Nomad (or ZO-3 as it is referred to in Japan) since the early 1990's. "ZO-3" is a Japanese language pun on the word "elephant", which the guitar's shape resembles, more or less. In addition to its odd shape, the guitar is primarily notable because it has a built in amplifier and 4" speaker.

In the US, Fernandes offered a simple version of the Nomad (single HB pickup, hard tail bridge, several colors), and also a Deluxe version with built in effects (HB pickup w/built in DigiTech multi-effects - these are nice). In Japan, though, they have offered many, many, MANY versions of this guitar: humbucker, single coil, trem tail, hard tail, several different iterations of built in effects, tribute versions, etc. They even made a tribute version of Jimmy Page's iconic double neck SG. The version I have is the earliest Deluxe version with an effects interface built by Zoom. More on that in a minute. It is good but probably the least desirable of the different Deluxe versions, as the versions with the DigiTech effects are more robust and have better user interfaces.

By the way, I found an outstanding writeup of these guitars here: http://theguitartherapist.blogspot.com/2011/07/review-fernandes-zo-3-series-guitar.html . Rather than rewrite that whole blog, I'll just say that if you are curious about these, the linked blog entry is a great place to start your research.

The guitar I bought was sold on eBay by a pawnshop, and I was able to buy it for about 2/3 of the typical sales price, which was cool. Frankly, because it came from a pawnshop I wasn't expecting much - I figured there was a good chance it might not work or have issues, and I was sure it was going to need a setup and probably more. Thankfully, the guitar I received is actually very playable and well set up - I might fine tune the intonation at some point, but it came with a much better setup than I was expecting. I am impressed.

I made a few improvements - the stock tuners were loose and worn out, so I replaced those with a set of Grover Mini Roto Grips. I also replaced the stock speaker grill with a much more transparent one, as the stock grill - a sheet of metal with small holes -- probably blocked more sound that it allowed to pass through. These improvements were well worth it, and the guitar now holds its tune well and is a lot of fun to play. This one is a keeper! Good action, decent neck, and even decent frets. It's well balanced, too, and unlike many of the other travel guitars I've owned you can comfortably prop this one on your leg as you play it, and it stays there.

So how does it sound? Much, much better than you'd think! The Deluxe version of the Nomad/ZO-3 has an interesting and fairly complete set of onboard effects. Not all of these are useful, and the UI for the effects is laid out like many pieces of 1990's gear, which is to say, kinda awful and painful to learn. And yet, while there are cheesy clunkers in the stock presets and patches, there are a few that honestly sound DAMN good. Crunchy rhythm and screaming lead tones that are right there for the taking in several of the stock presets (B1 and C3, especially). Due to the judicious use of multiple built in effects these tones are actually well crafted -- a little delay, a little reverb, some very basic amp modeling, an appropriate amount of gain, etc. You can easily edit and alter the stock presets, or copy them and then alter the copies. Lots of flexibility on that score. The end result is several presets with really, really great tones. Sure, it's a bit ratty due to the small speaker and even smaller amp-on-a-chip, but you can overlook that because the delay and reverb are so well tuned. You kinda expect it to sound like crap, and are then amazed and go slack jawed when you realize not only does it NOT sound like crap, it actually sounds damn good! it isn't very loud through the stock amp, but it's loud enough for practice or to jam on in a motel-room. And of course, you can plug it into a real amp if you want to (and all of the effects will work in that situation, too). As a bonus, you can plug a set of headphones into the stock output jack, and even those sound great!

No one is going to confuse this thing for a LP or Strat plugged into real amp with real effects, but at the same time, I still can't believe this little funny looking elephant of a guitar sounds as good as it does. You probably wouldn't want to gig with this -- there are better choices for that if that's your goal --- but it's ideal for sitting around a hotel room on a business trip or vacation, which is how I see using it. It's also ideal for wailing away late at night after everyone else in is bed, and I wasn't expecting that.

A better view of the effects UI in all of its 1990's glory (my version, but not my guitar): 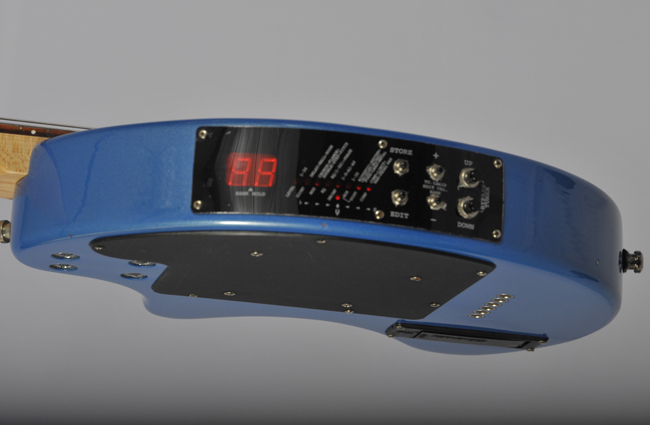 I have the one with the Digitech effects built in. It a very cool playable little guitar and also has drum machine built in. The ultimate portable travel rig: decent guitar, programmable multi-ieffects, drum machine, "amp" and speaker in one tiny package with no cables required! (now if it had a looper!)
You must log in or register to reply here.
Share:
Facebook Twitter Reddit Pinterest Tumblr WhatsApp Email Link