Guitar arrived yesterday and I spent some time doing a setup. Some things are expected with any new guitar but every one of the retainer nuts were loose on the tuners. Other than than, typical stuff. Truss rod needed tweaking, action lowered, and my preferred strings put on. The rosewood fretboard was really light colored but after hitting with some Guitar Honey it darkened up a lot.

I love my Les Pauls and currently also have an 06 Classic but I really like the thinner body of my ESP LDT EC-1000 Les Paul style guitar. I used to have one of the Les Paul Custom Lites that was available several years ago but didn't care for the fat neck.

Anyways, after a setup I plugged it into my little Marshall practice amp (that's pretty much all I use at home) and played it a couple of hours. Fantastic guitar. Great fretwork that allows for very low action. The thinner body allows for much improved upper fret access. The neck is advertised as "Slim Taper" but it has a little more heft compared to my 06 Classic. It's a great feeling neck.
Pickups are 57 & 57+ and sound really good so far. The real test will be thru my gigging rig but I'm sure I'll be happy with them.

Guitar weighs in at 7.6 lbs on my digital bathroom scale. Super happy about this. Lately I don't care for heavy guitars and stopped gigging my LTD because it weighs 10 lbs. This one is a featherweight.
Really looking forward to using it at the next gig.

EDIT: Had to add this after answering Hellbender's question. You could think of this guitar as being a single cut SG with the sustain of a Les Paul. The thinner body is SO comfortable. 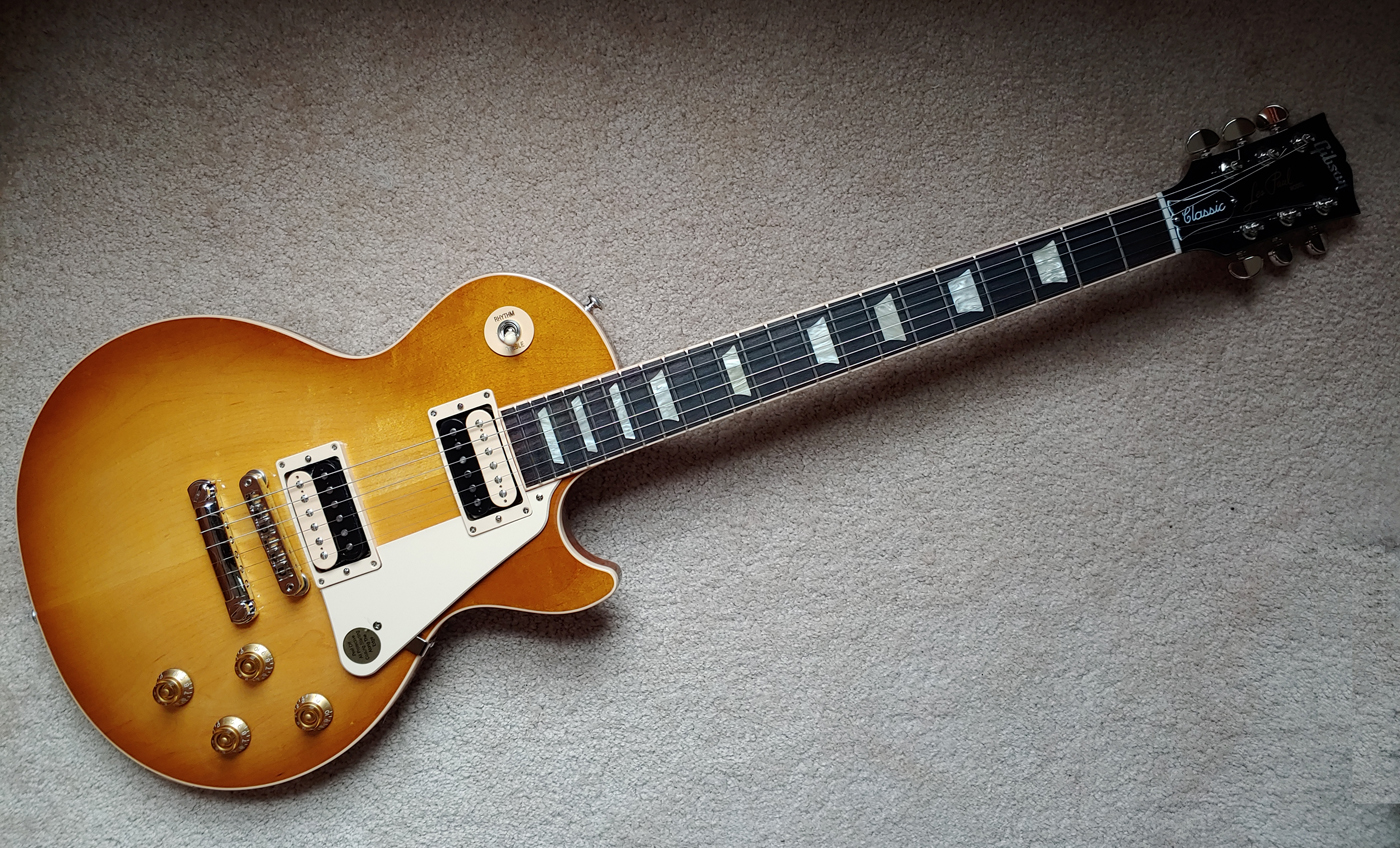 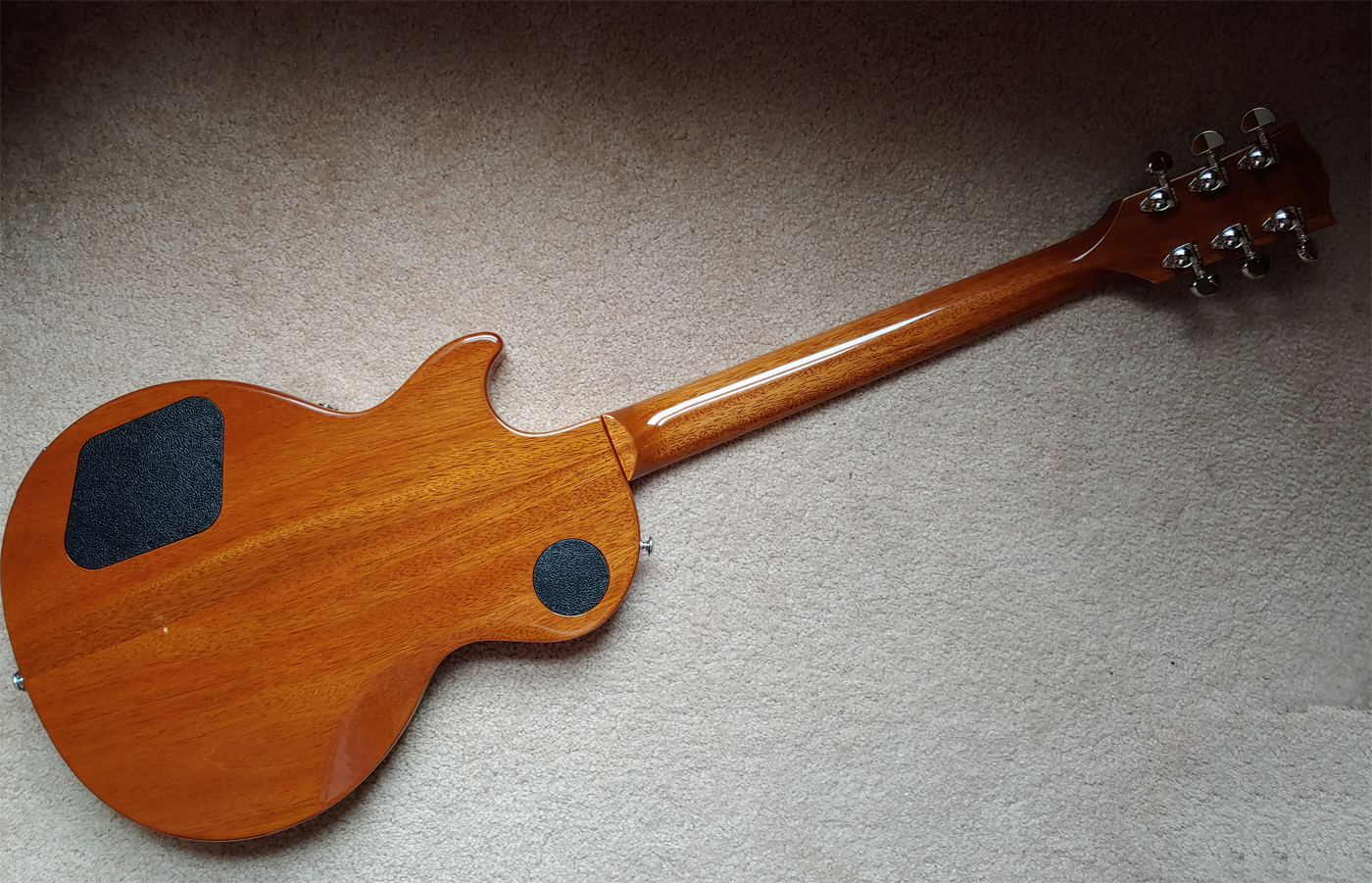 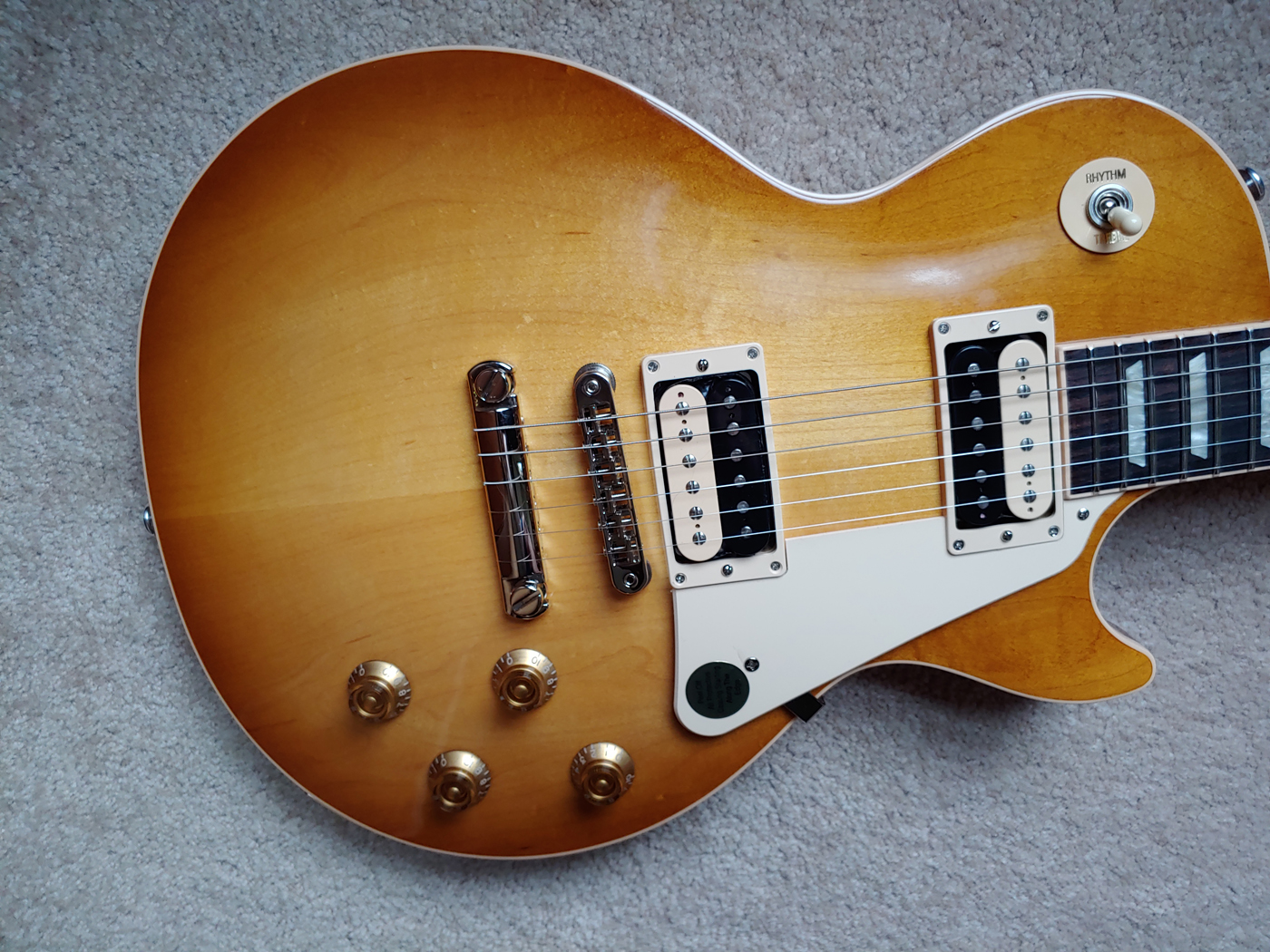 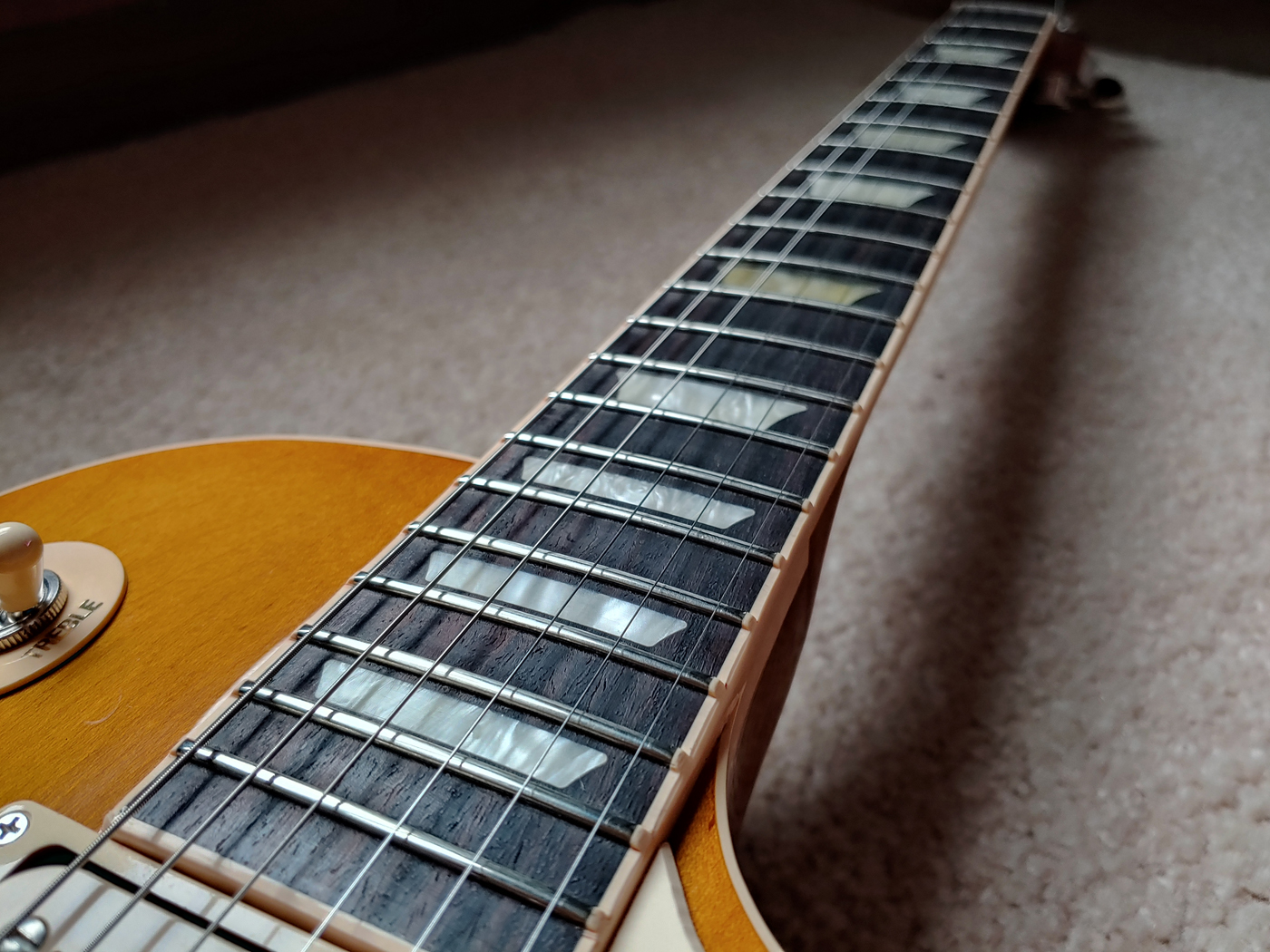 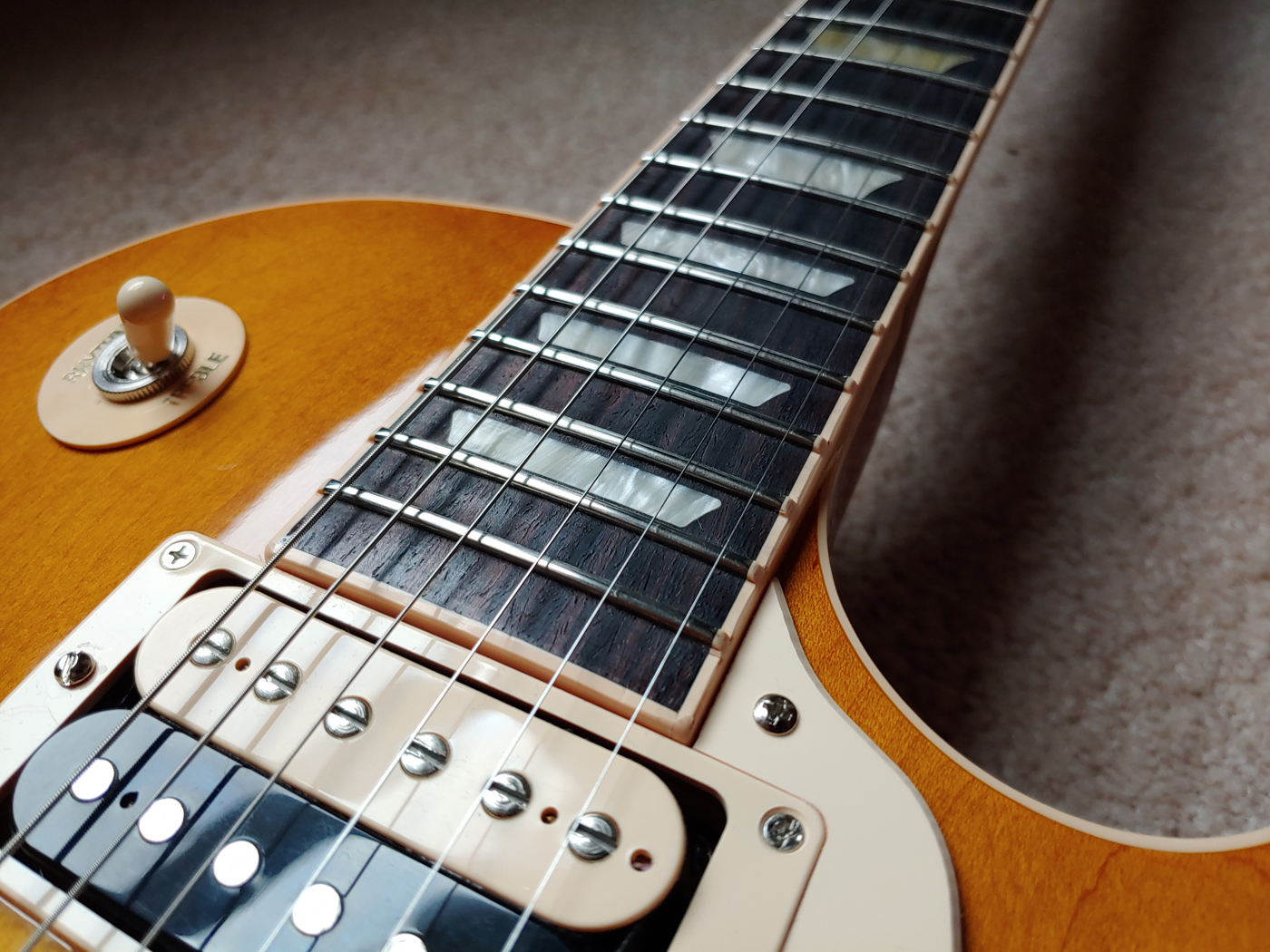 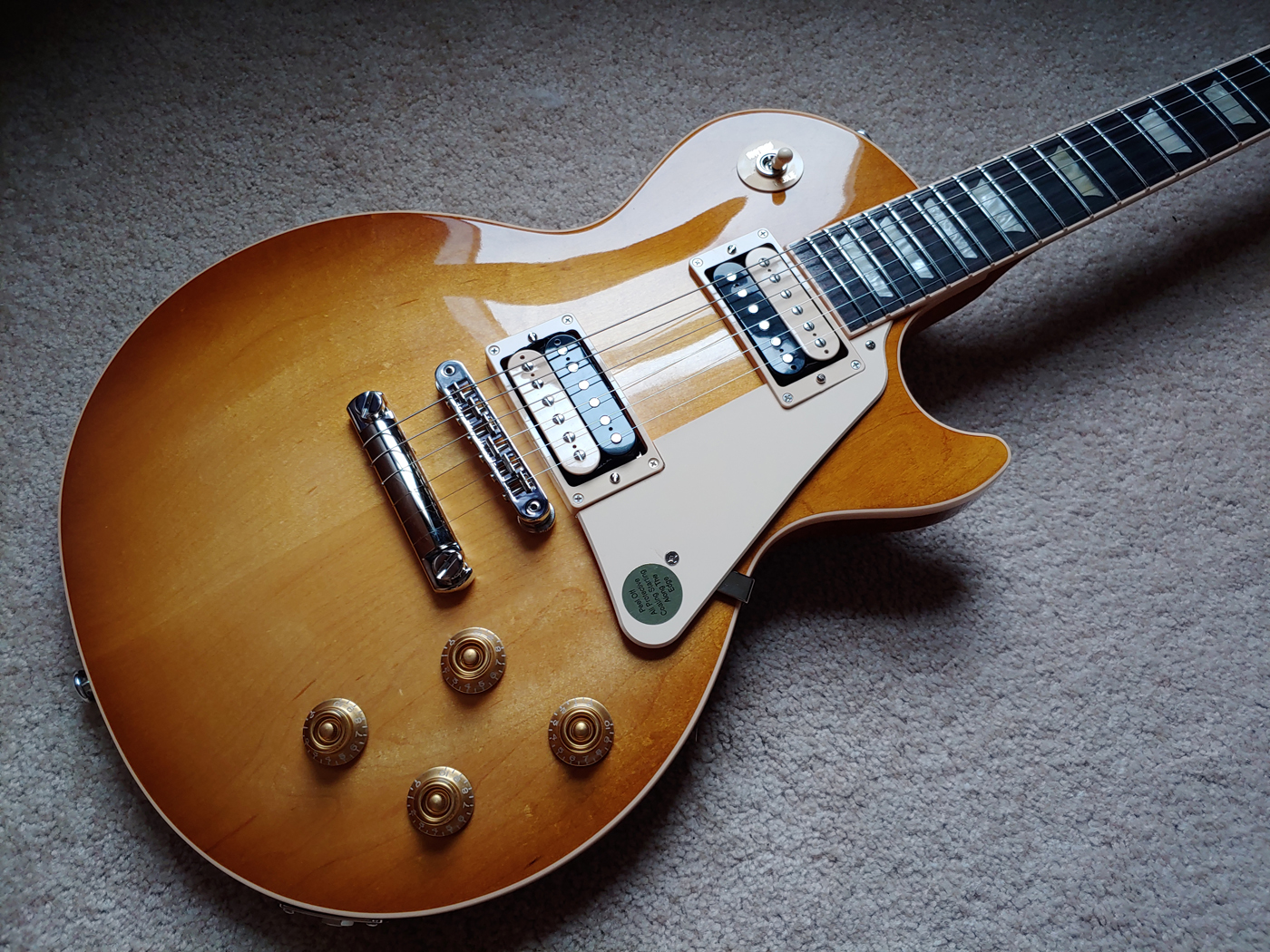 Does it sit well and stay put while sitting down?

Does it sit well and stay put while sitting down?
Click to expand...

Yes, definitely no complaints there.
You could almost think of it as a single cut SG.

I have had a jones for some time for a LP Custom Lite - I really like the idea. Does yours have any coil splitting options?

BigDoug1053 said:
I have had a jones for some time for a LP Custom Lite - I really like the idea. Does yours have any coil splitting options?
Click to expand...

Nice looking guitar, this seems like an obvious thing Gibson should have offered 50 years ago.

Nice. I had a The Paul and really liked it with the thinner body.

I like the concept. LP ergos with SG snarl?

Nice "get". I seem to remember Gibson putting out thinner bodied LP's from time to time in the last 15 years or so (but not very often). I was eying one at Elderly a few years back, hemming & hawing - even played it on two trips to the store and liked it a lot, then the person who bought it took my decision making problems away for me. Enjoy yours.
S

Congrats on a beautiful guitar!

That's a sweet LP Classic. I remember seeing the Blk LP Custom Lite years back
and thinking...naaawww. But after seeing yours and getting back to lighter
guitars (SGs), this is a nice alternative if one wants the maple top w/o the weight.

Congratulations! I had been seeing that guitar in an ad. Had I not recently bought a different LP, I would be looking into one of those, which I might do later on anyway.

I hope you get a lot of pleasure and use from it!

Rhythm Rocker said:
That's a sweet LP Classic. I remember seeing the Blk LP Custom Lite years back
and thinking...naaawww. But after seeing yours and getting back to lighter
guitars (SGs), this is a nice alternative if one wants the maple top w/o the weight.
Click to expand...

I had one of those LP Custom Lites. It was a great guitar but the neck was a bit too fat for me so I sold it.
I really wish I had kept it.

Yes, the "Lite" models weigh less but they are also a lot more ergonomically comfortable. You don't have the bulky typical Les Paul body. It feels like you're playing an SG for Strat.