Well, maybe not THE last - but one of them! As many of you know, Dan recently announced that he's winding things down at Danocaster. I was lucky enough to have put my deposit down a few months before the cutoff date, and just took delivery of this beauty today.

I don't buy guitars often (this makes my 5th electric in nearly 20 years of playing / GASing) so I figured I'd tell a bit of the story behind this one - what inspired it and what the build process was like. That said, tons of pics below, so feel free to skip ahead!

The mid-50s 2-tone sunburst Strat has always been a grail guitar for me. Not long after I first started playing as a teenager, I received the G3 DVD as a gift - Vai and Satriani were cool, but Eric Johnson blew me away with that beautiful violin tone from his '54. Another hero of mine, John Frusciante, is better known for his 3-tone burst, but also possesses a killer 2-tone. I had actually bought a sunburst/maple board G&L Legacy years ago. While a really nice guitar, the G&L is a modern spin on the Strat. I wanted something the truly captured the mid-50s vibe.

After years of gawking of Dan's beautiful Instagram posts and reading glowing forum reviews, I took the plunge and put my name on the list in February 2018. Dan (who was super responsive and friendly throughout the process - he even emailed me tonight after seeing the guitar was delivered to check in and make sure all was good!) affirmed my spec, and told me it would be about 9-10 months. No problem - I'm a patient guy and willing to wait to get exactly what I want. I checked in around 10 months, and Dan let me know that things had gotten a bit backed up with a shop move. My deposit was finally called in April, and the build began.

I spec'ed out something pretty true to a mid-50s Strat - 2-tone burst on an ash body and a maple neck in Dan's .88 "soft V". Dan chooses the pickups based on what fits the individual guitar best, but I did ask for the bridge pickup to be wired a tone control (which apparently is his standard setup anyway). I asked for medium-light relicing, and other than that, let Dan do the rest in his discretion.

A few weeks ago, Dan sent me this pic to whet my appetite:

The first 16 months of waiting honestly weren't bad. I've got other great guitars to play and I could be totally happy without another one. The Dano was just this thing in the background, slowly approaching. But after getting this photo, the wait was impossible.

I cannot understate how brilliant the aging work is. Dan has taken it to an art form. This thing wasn't just randomly rusted and chipped up; all of the wear is carefully recreated to mimic real playing patterns...things I see on my own older guitars.

Many people rave about Dan's neck finishes, and the hype is real. It's not bare wood, but it's not glossy either. I haven't played anything like it, but it's super smooth and has an awesome broken-in feel. Fretwork and setup, the 10" radius and 6125 frets are obviously a vintage deviation but I prefer them from a playing standpoint.

Dan used Rocketfire Total 60s pickups on this one. This guitar is very clear and articulate. Tight lows and bell tones for days. I'm still exploring all the sounds, but my initial reaction is that it's just a great old strat, plain and simple.

Now for the pics! First, here a few of Dan's photos. Check out the grain on that 1-piece back

Finally, here are a few of my own. My goal was capture all the little things that make these special - the wear on the pickups, the dirt and discoloration on the plastics, the fine checking, the neck finish. 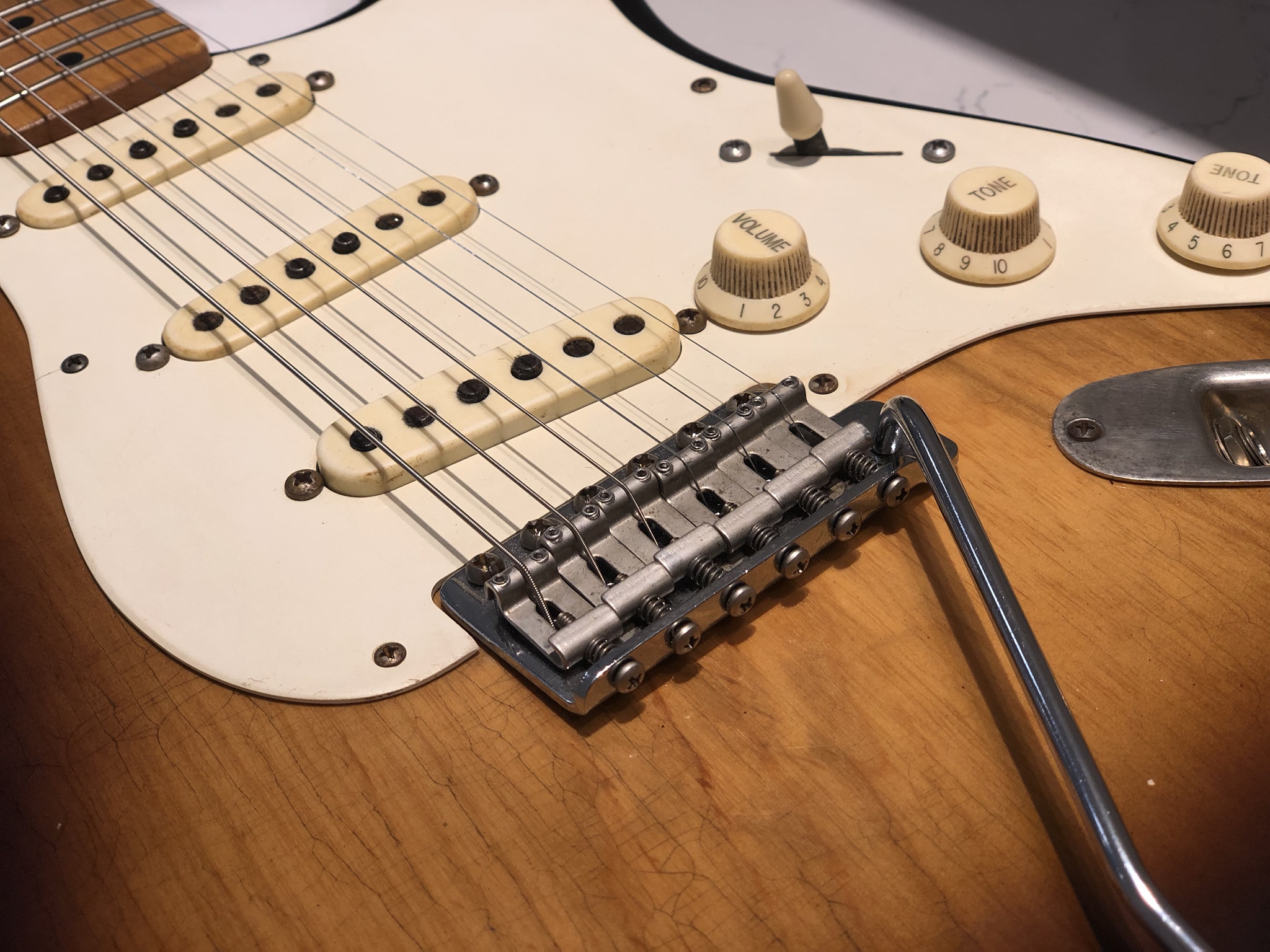 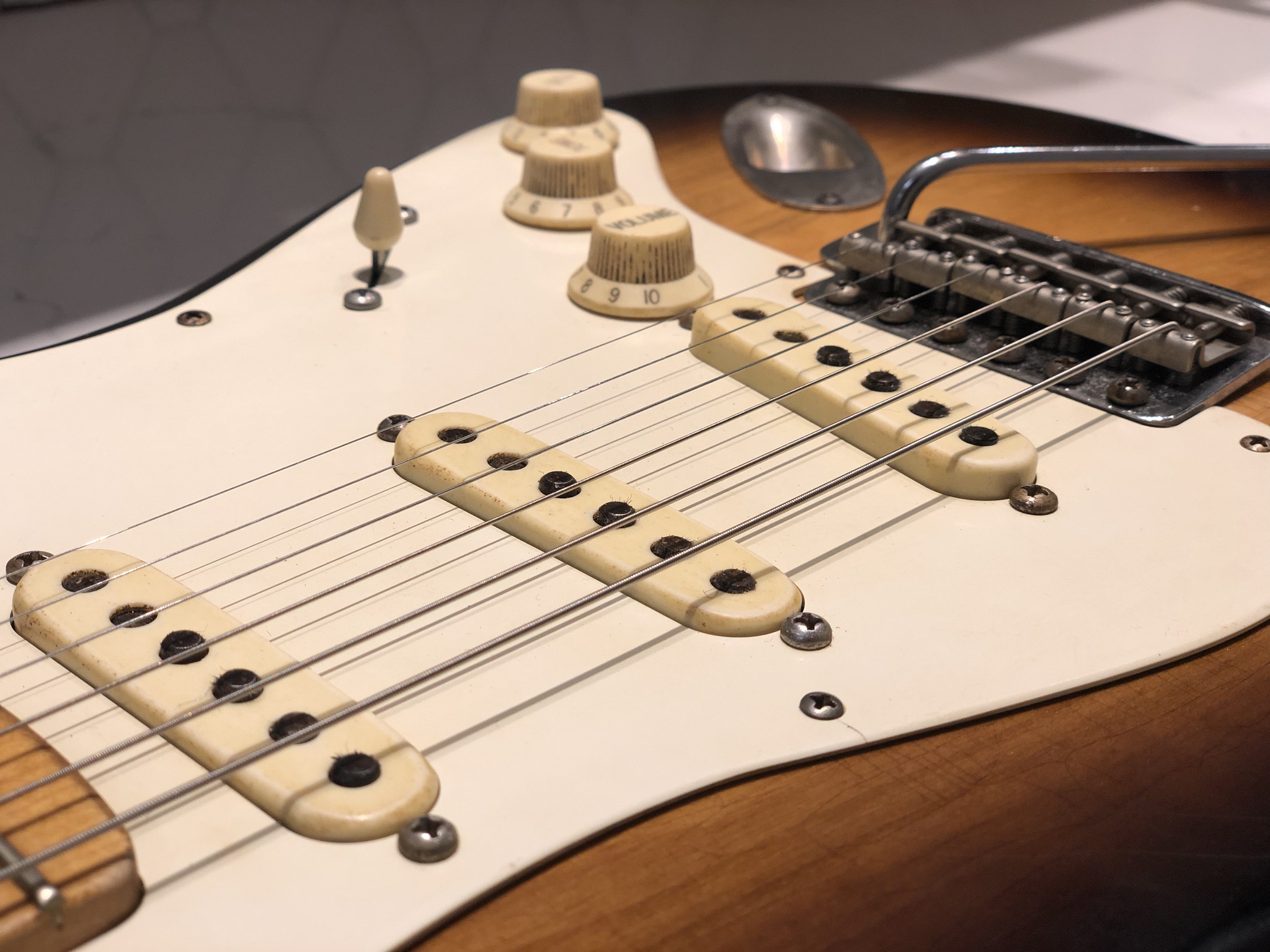 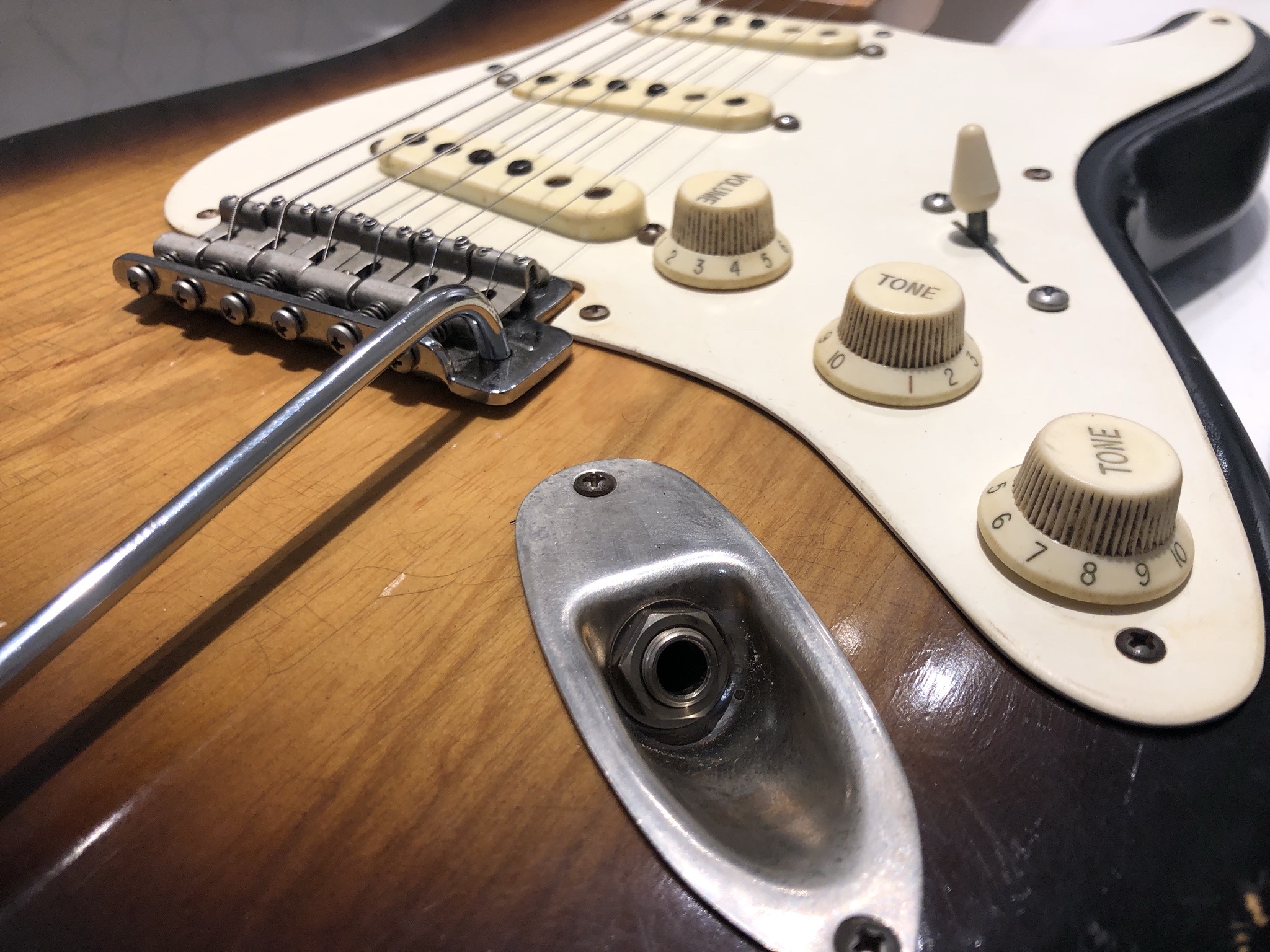 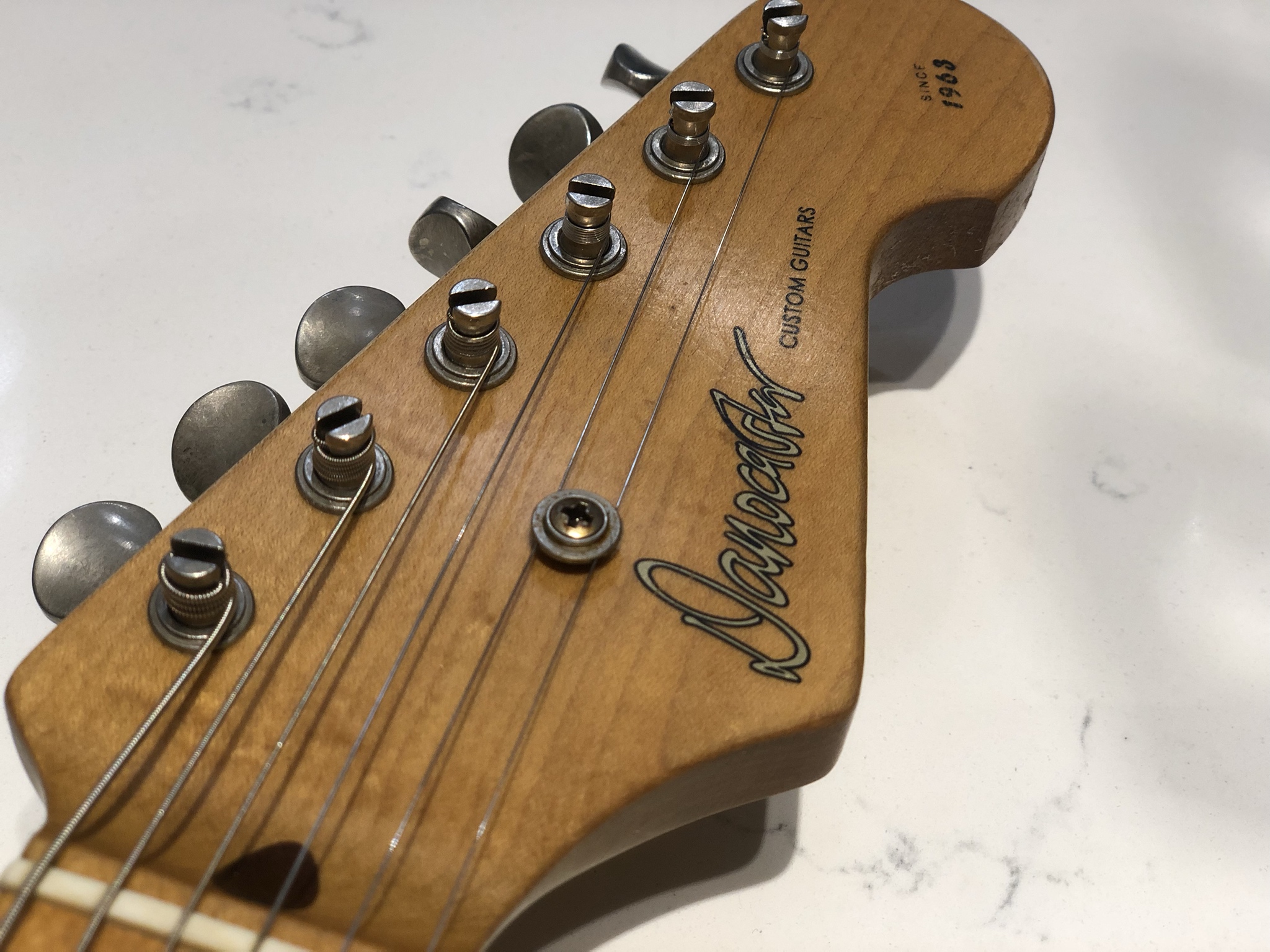 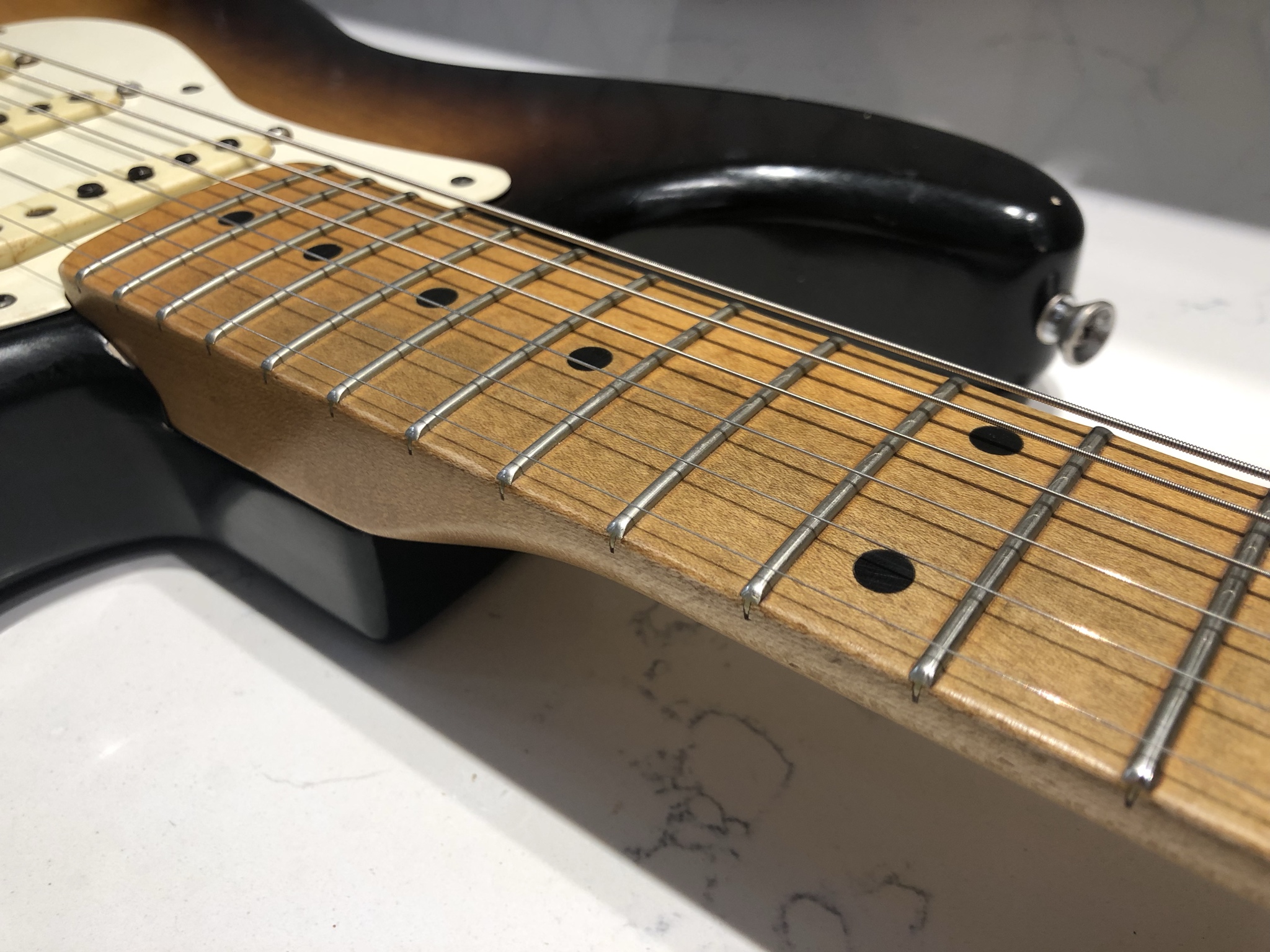 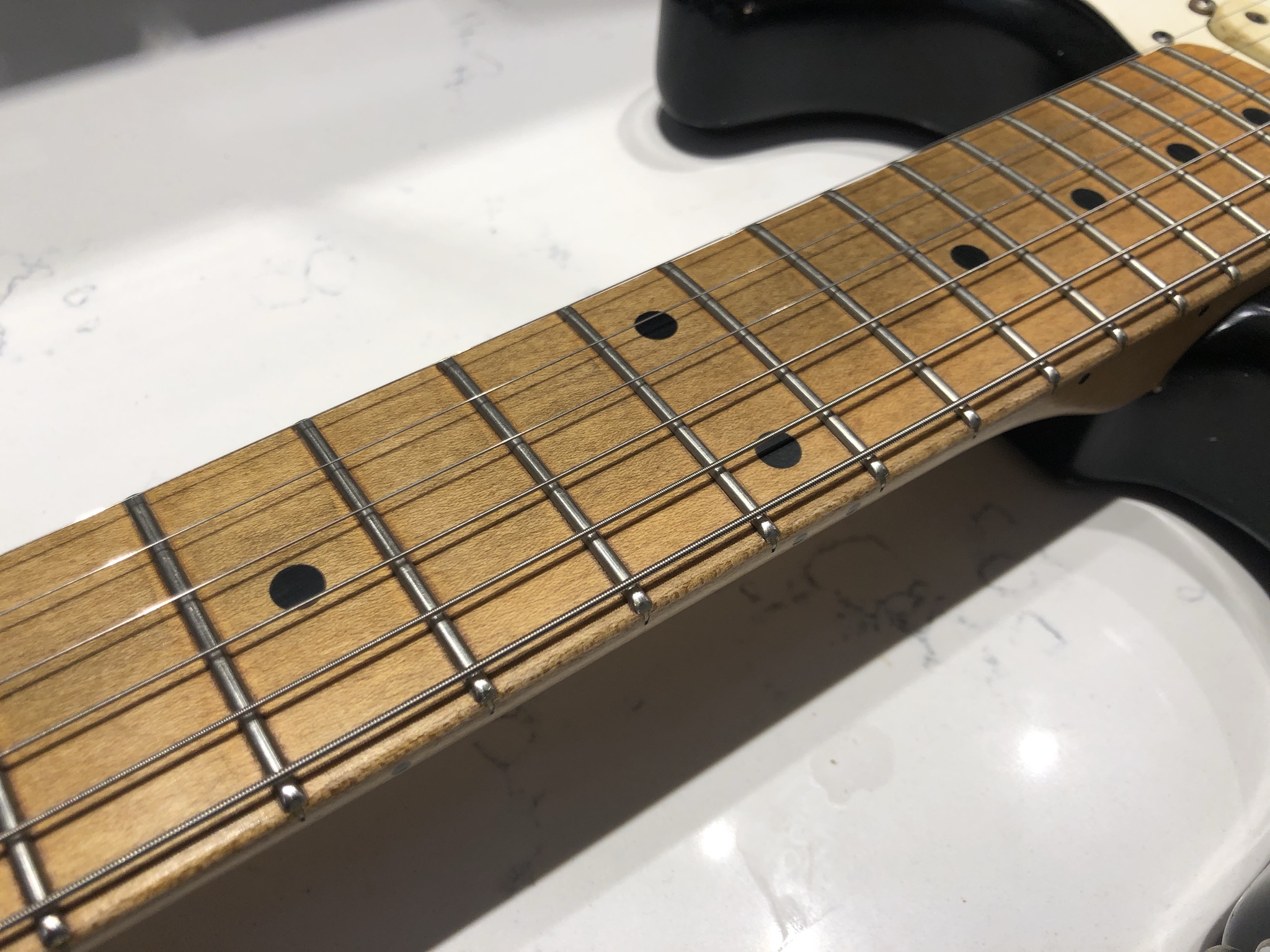 Very cool! Hope you enjoy it for many years...

Play it in good health.

Note to self: break out my 50s two-tone relic Strat and give her some playing time...

Congratulations on getting one of the last produced Dano's!

Now that's how a relic should be done (coming from a "non fan"" of relicing).

Beautiful! That's what I see when I close my eyes and think Strat!

Thats pretty much what I wanted and it would be 1 year at this point that I got on the list, but I quess that's null and void at this point!

Wow, dude. That's a SUPERB guitar. I have a '50s style Blackie Strat, but a 2TSB would be the next addition to the collection if I could. Congratulations and HNGD!

Really enjoying this guitar. Very fast response but also has lots of air and chime in the tone with a very sweet top end. Never owned an ash Strat before but I see what people say about it being more scooped than alder.

Thanks for the kind words everyone!

Wow! I’m a confirmed Tele guy but I’ve been jonesing a little for a good Strat these days. It’s been a while since I’ve had one and that’s the one that’s haunting me. Love the 2TSB with the maple board. Brownie all the way. And the fact that it’s a Dano makes it even better! Congratulations and enjoy!
G