The eternal question: Dynasonics or Filter'trons?? Well, I decided to answer the question for myself ONCE AND FOR ALL. And the answer is BOTH, obviously. 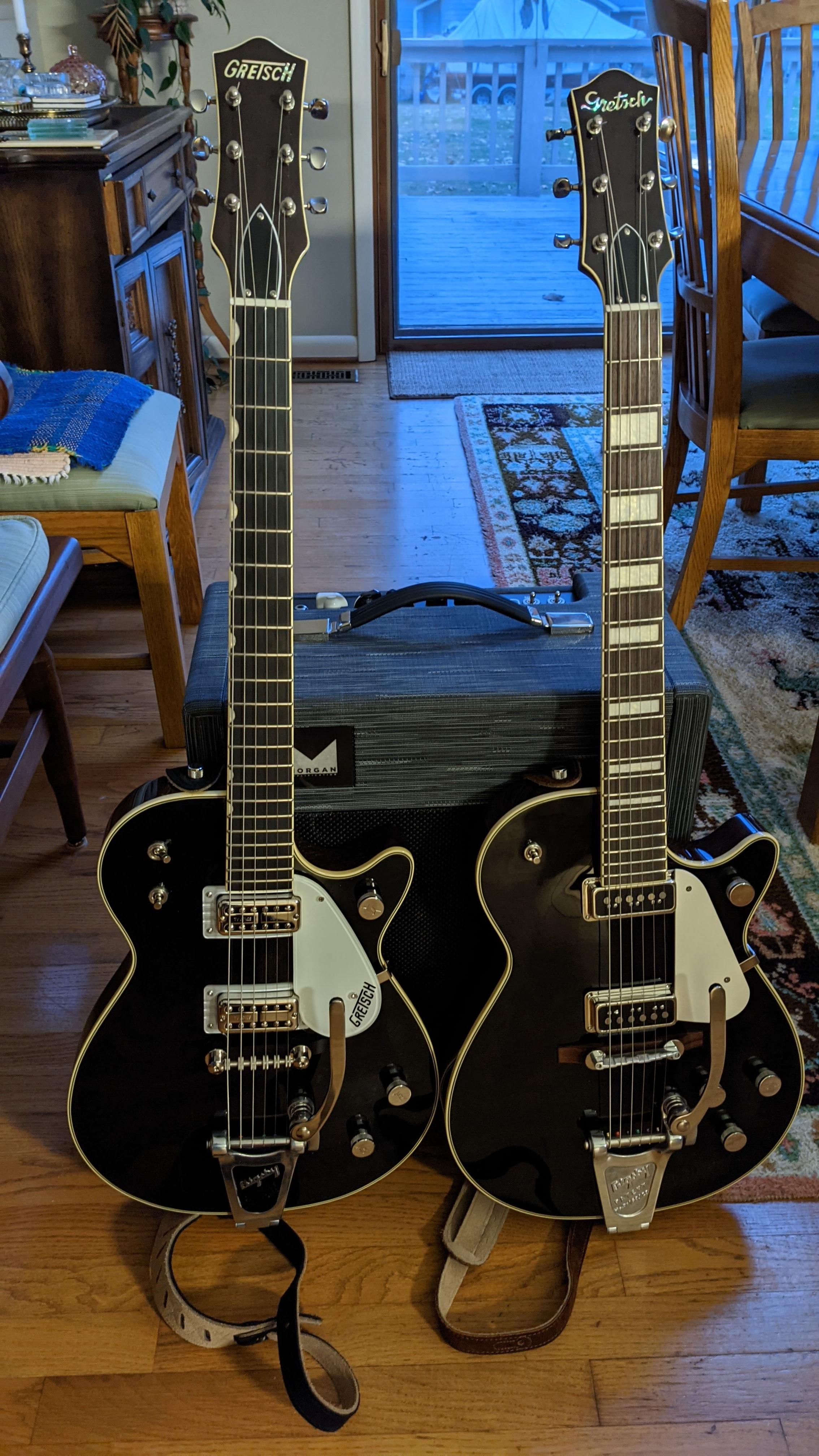 Earlier this week I picked up a Gretsch Vintage Select '53 Duo Jet (above right), and today I received a Vintage Select '59 Duo Jet (above left). They are very similar specs-wise, with the biggest non-cosmetic difference being the pickups (TV Jones T-Armonds and TV Jones Classics). However, there are other minor differences such as the wiring (a tone knob and a mud switch), the bridge (an aluminum one-piece compensated and a Space Control roller bridge, and the fingerboard (rosewood and ebony). They also have minorly different neck carves, with the '59 having ever so slightly shaved off shoulders for a subtle "V" shape.

I can't fault the fit and finish on either except for the pickguards: the '53's looks rather plain and I would've preferred white-black-white material, and the '59's guard has two small marks seemingly underneath the clear part of the plastic. Other than that, they are just about perfectly made and finished, as far as I can tell. The finish feels great, although it is poly.

Both guitars are abound 7.5 lbs each. Acoustically, they are loud, but there is definitely more twang and clang with the aluminum bridge on the '53. I think that pretty clearly carries over into the amplified sound.

One thing that I wasn't expecting is how much semi-hollow character these guitars have. The body is thicker than modern Jets and the routing is more extensive. They are listed as "solid bodies" on the Gretsch website but I would not say they sound or react like solid body guitars at all.

Thoughts on the '53:
I have not owned a Dynasonic-equipped guitar in many years, and that was a Telesonic with DeArmond 2K pickups which I hear are not quite the same as vintage Dynas. I would describe them as balanced, maybe slightly scooped, with the extended highs you'd expect from single coils but also a surprising extended low end as well. They are also quite high output! Overall, I think the Dynasonics remind me quite a bit of my Telecaster pickups, although with a lot more bass and a bit less mid scoop. The in-between sound is probably the real stand-out on the '53. It's absolutely lush and beautiful.

Thoughts on the '59:
The '59 is my third Filter'tron guitar, so I'm quite used to the sound of 'trons by this point. They are lower output than the Dynas, with more mids and much less low bass and less cutting highs. They sound balanced and seem to just work without too much finicky EQing. The bridge is not compensated at all and is probably the main weak point for the guitar in my opinion. I see myself replacing this with a one-piece aluminum or stainless steel bridge in the future.

In the end, I think they are both great guitars. However, they're not 100% how I would've designed them. These are a list of "improvements" that would benefit the guitars for my uses:

I think I will end up doing most of the above mods, eventually. But both guitars are totally playable stock, and I plan to play the heck out of 'em!

My duo is all FilterTrons:

Wouldn't it be NGsD? (No worries. I've been bothered my whole life that the baseball stat is RBIs instead of RsBI.) Oh, and congrats on that pretty duo.

IPLAYLOUD said:
My g/f and I have Duo Duos...sort of.
You made 2 great choices!! Enjoy them.

a good looking couple!
guitars are nice too!

Random1643 said:
Wouldn't it be NGsD? (No worries. I've been bothered my whole life that the baseball stat is RBIs instead of RsBI.) Oh, and congrats on that pretty duo.
Click to expand...

Well it was two separate days, so I think "new guitar days" works.