Off topic yet on topic. What level of guitars are you feeding all these high end modelers?

Mostly high-end stuff with my Helix...

They all sound great with the Helix...if I'm honest, I'm biased towards nice guitars that help me sound like the best version of me. The tone generation - whether it's from an amp or a modeller - is really about hitting the right level of gain with the minimum of irritations (fizz, muddy low end etc). The Helix does that perfectly, and doesn't get in my way.

ucnick said:
Fwiw, if you can get off the need to see it before you play it, check out www.telemods.co.uk/, they take Pacifica Tele clones and stick a GK3 in them. I bought one to drive my GR55 and it freaking kills. Prices are reasonable too, in the neighborhood of $USD600 or so.

This is the one I have, sounds and plays great: http://www.telemods.co.uk/guitars/311S stag.html
Click to expand...

Thanks for the heads up! I've always wanted a Pacifica of some sort but never ended up getting one.

- Anderson semi-hollow drop top thingy (1996 or so). My #1. Vibrato fixed (even if I die for vibratos, but due to the very noticeable semi-acoustic build, the Anderson picks up any kind of spring twang, which I simply hate). PUs to go in there in the next days (after changing configurations like a mad man since 20 years) will be a mini HB in the neck and normal HB in the bridge positions, both handwound by a local luthier.

- G&L Legacy special (1994 or so). A strat as it should've been done (according to Leo F. himself)? No friggin' way, this thing sounds nowhere near like a strat, regardless of the PUs used. Like it quite a bit, though. Extra: An additional SC sized Duncan Cool Rail just in front of the regular bridge position PU (a little 59).

These two usually do all the jobs.

Others: Framus Diablo, Ibanez Saber (musical wallpaper fusion, here I come!), Pacifica Tele (cheapest Mike Stern model from Indonesia, replaced PUs), Epiphone LP Studio (*yuck*, but won it for no apparent reason in a contest that nobody attended) and a simply fantastic 335 clone by Ibanez from the early 70s (unfortunately this needs pretty much everything re-newed, frets, bridge, electric, maybe one day...).
Plus a Takamine western and a Yamaha nylon - both of which need to run through a "modeler" (MS50G) because of their ultra-cheap piezos (the Yamaha sounds quite great, though).
Plus a whole lot of parts that have been complete guitars once (and theoretically still could be).

For my ability, a Kemper and a Les Paul Standard are probably wasted on me, but that and my trusty "the SG" are what I use. I can justify this by...

a) I'm old enough to afford nice toys now,
b) I've had the SG for 30 years and apart from that and the Les Paul (which was my 45th birthday present to self) I've only had one other guitar, a Westone Thunder 1A. In fact in total, my guitar expenditure has been

There's a Cry Baby Wah and a Zoom G5 in there at some point. And strings. And innumerable picks...

What level of guitars are you feeding all these high end modelers?

Next level, sir. Next level...

Anthony Newcomb said:
Well I've always like technology, but I still cringe more when buying pricey electronics than I do buying a guitar that should (theoretically) age like fine wine...instead of finding its home later atop a pile of electronic carcasses somewhere on misfit island...

After years of leaving face and breath marks on the front of music store windows in my broke days, I've treated myself to a few nice guitars in my more stable middle age . I now mainly play EBMM

Here's the most recent pics of the family...though I just sold the JP Majesty to the right as it was played the least and was an experimental purchase more than anything. Cutlass in the center and Luke III to the left (keeping those two for sure) 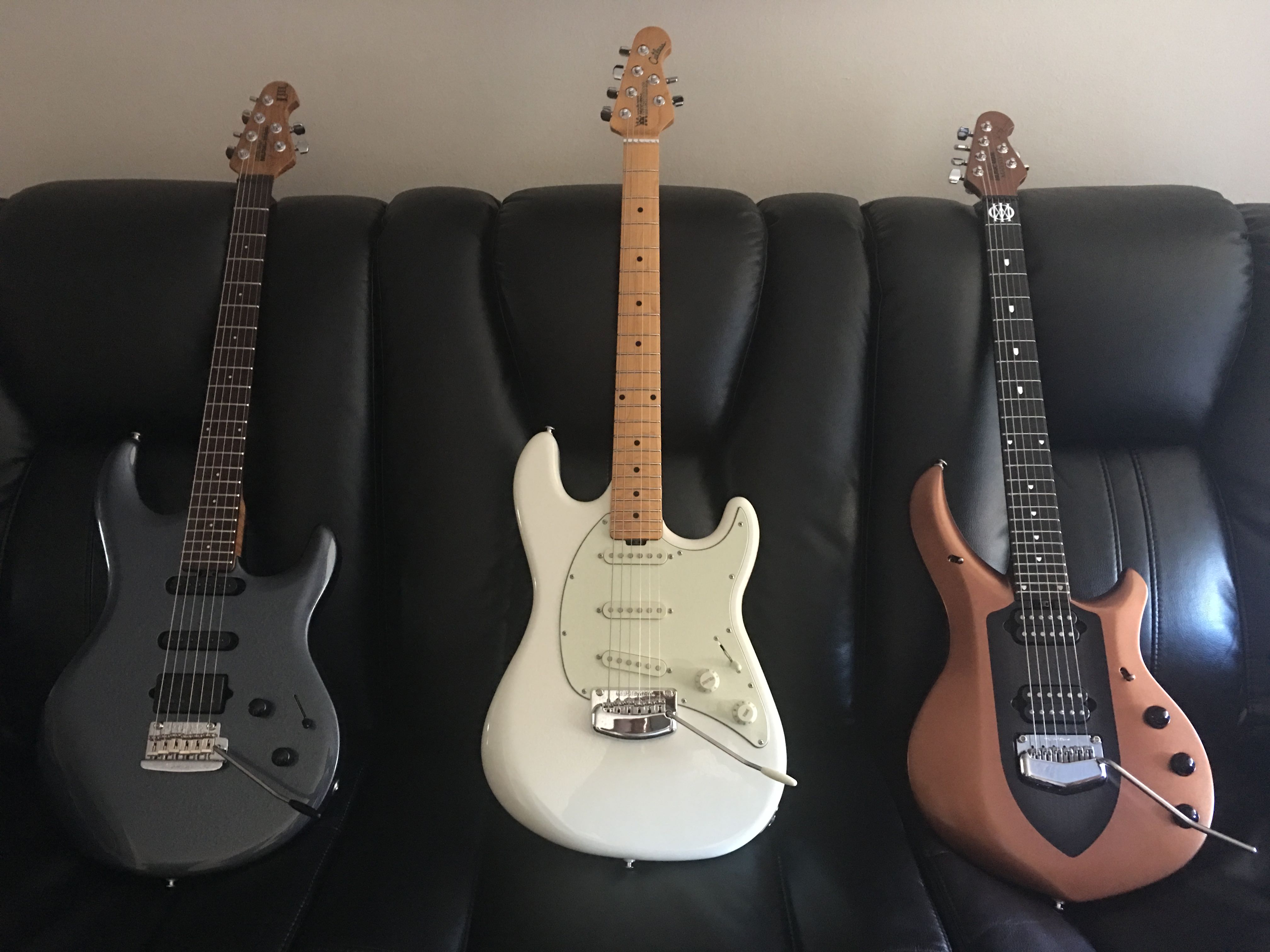 I'm down to only one guitar at the moment. My next will be some variant of the Strat, but I'm LOVING the Music Man Majesty. I got the same color you did. It's just such a joy to play. Going into a Kemper with HX Effects via 4CM. Sounds great through my headphones and through my Mesa 2x12 cab.

I usually play the guitars in my signature below, an ES-333, and a Music Man StingRay five.
K

My R7. But right now its into S Gear or a Vox AV15. Eventually it'll be a Helix LT I think (features & budget driven). When I heard Paul Hindmarsh's early demo and he switched from an LP to a Strat during the demo on one patch, I was pleasantly surprised to hear the patch sound change accordingly. Tells me the character of the guitar need not be masked or overidden by a high end modeller.

I have two electric guitars:

Neither are 'high end' instruments and I don't have a lot of money tied up in them but they are well maintained, versatile, and very toneful guitars configured to best suit my hands and ears.

Over the past 3+ decades I've played the PRS through vintage Fenders, Marshalls, Voxes, etc, Mesa/Boogie's, various Valco made small tube combos, a rack rig, various modified tube amps, a variety of boutique amps from Fender and Marshall to Dumble ODS flavors, and now two generations of Fractal Audio AxeFX modelers. The guitars sound the same now through an AxeAx II -> Atomic CLR rig as they have through the years using a wide array of traditional tube guitar amps.

I have owned and played other guitars (and basses) over the years from Squire and PRS SE models to Tom Anderson and PRS Artist Series models. These too each carried their own sonic character from rig to rig and through modelers as well.

IMHO: If it sounds good it is good, regardless of what it's played through (be it a modeler or a traditional analog rig). Price, reputation, etc. will not necessarily dictate how musical an instrument will sound. I built and own a Squire Vintage Vibe 60's P-Bass, assembled using a body and neck (purchased super cheap off Ebay from different sellers) and USA Fender Vintage Reissue and Deluxe parts that I already had on hand from other projects. I'm into this bass for ~$100 and it's one of the best sounding P-Basses ive ever owned or played.

My first guitar was a Matumoku built Vantage Avenger AV-330 Strat type (alder body, maple/maple neck), $300 new w/ HSC. I played that guitar as my primary for eight years, until the frets were played down to the wood (bridge single coil was swapped out for a SD humbucker within the first year - a poor man's super Strat). That Vantage saw a lot of guitars pass through my hands, some were very nice guitars - two Gibson LesLPauls (one was a 74 Custom in cream/white), a Fender Strat Plus, an Ibanez 540 Sabre, quite a few others. That Vantage remained on top until I bought the 'PRS Electric' in '87. I built the USA Custom Guitars Strat in 2005, after nearly two decades looking for a suitable strat, to replicate the sound of the Vantage. A close friend of mine owns and regularly plays my old Vantage so I was able to get an accurate weight for the body. The USACG strat hit the mark nearly perfectly! This said it took ~$1,100 in parts and a lot of effort to effectively capture the sound and vibe of a $300 Japanese guitar.