This isn't a poll. We're looking for that great "X" factor the drummer brings to the group.
Jump in, have fun.


Choose from the followingtaken from the Wikipedia list)
Deceased
John "Stumpy" Pepys (1964&#8211;1966) (Portrayed by Ed Begley, Jr. in the video "Gimme Some Money") Died in a bizarre gardening accident, that the authorities said was "best left unsolved."
Eric "Stumpy Joe" Childs (1966&#8211;1967) Choked on vomit of unknown origin, perhaps but not necessarily his own, because "you can't really dust for vomit."
Peter "James" Bond (1967&#8211;1977) (Portrayed by Russ Kunkel whose character was mistakenly credited as the name of the previous drummer) Spontaneously combusted on stage during a jazz festival on the Isle of Lucy.
Mick Shrimpton (1977&#8211;1982) (Portrayed by R. J. "Ric" Parnell) Exploded onstage.
Joe "Mama" Besser (1982) (Portrayed by Fred Asparagus). Claimed he "couldn't take this 4/4 ****"; according to an MTV interview with Spinal Tap in November 1991, he disappeared along with the equipment during their Japanese tour. He is either dead or playing jazz. The name is a play on that of Joe Besser, who similarly had a short-lived and ill-fitted stint as a member of The Three Stooges.
Richard "Ric" Shrimpton (1982&#8211;1999) Allegedly sold his dialysis machine for drugs; presumed dead.
Sammy "Stumpy" Bateman (1999-2001) Died trying to jump over a tank full of sharks while on a tricycle in a freak show.
Scott "Skippy" Scuffleton (2001&#8211;2007) Fate unknown.
Chris "Poppa" Cadeau (2007&#8211;2008) Eaten by his pet python Cleopatra.
Plus 9 other drummers at various times (Probably between 1970 and 1981) all of whom are dead.

Has to be Stumpy Joe.

I predict spontaneous combustion for this thread.

Mick Shrimpton by a mile.

"As long as there's the sex and the drugs, I can do without the rock and roll"

John "Stumpy" Pepys for sure!

Seems to me that Joe "Mama" Besser isn't the only Stooges reference, but that Stumpy and Stumpy Joe mirror Curly being followed by Curly Joe in Stooges.

I'm no sure if you guys know, but the drummer subplot isn't in the 5 hour workprint so that must have been one of the last things they shot for the movie.

Stumpy Pepys! His performance on Gimme' Some Money is amazing And those horned rim glasses just make him! 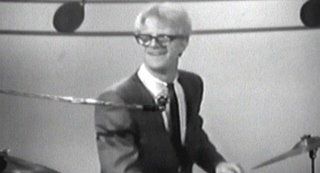 Ive always assumed the end life goal of any drummer was to spontaneously combust on stage.

Such a great documentary on the road of a great band, could laugh at themselves but still turn out great album after album. A big influence on me.