white keys, do you speak it?
Click to expand...

Our WL likes Gb and Ab and Db

rhoydotp said:
Our WL likes Gb and Ab and Db
Click to expand...

I'm pretty bad about moving things to Ab and Bb. I don't know why but they sound best with my voice.

Gb is brutal though, I avoid that wherever possible.

Thought I'd share....NPD: JHS Pulp n Peel V4. Got it on eb at a crazy deal...50% off retail, so I couldn't pass it up. Used but like new. It replaced my MXR custom comp. I really like the tweak-ability of it and especially the blend knob. The buffer is nice too and am unsure of whether or not I'll be using the dirt switch (probably not). Different type of compression but overall, nice upgrade and am really loving it.

well, I think my "pedalboard planner" plan didn't quite work out how I thought.... 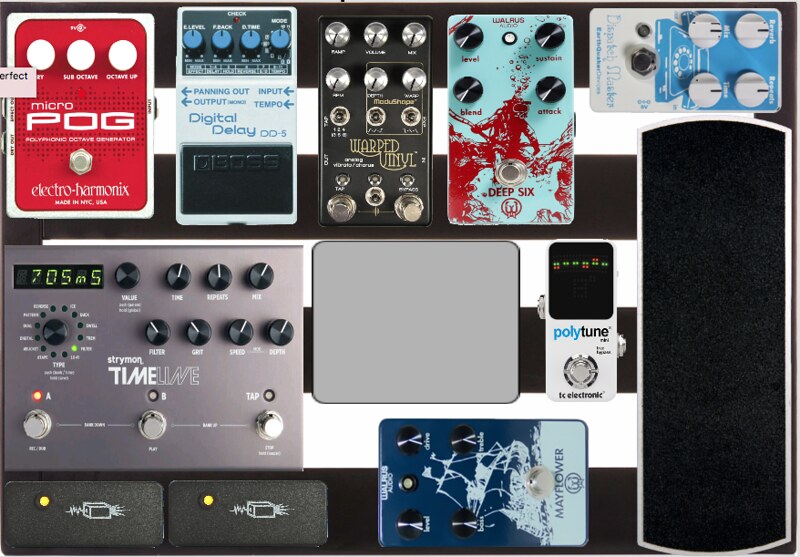 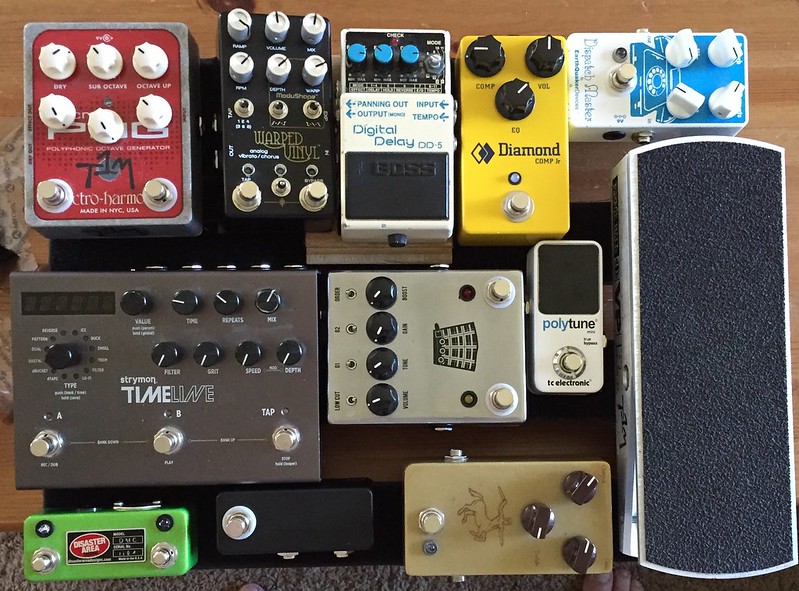 black_moses846 said:
well, I think my "pedalboard planner" plan didn't quite work out how I thought....
Click to expand...

I'm impressed you got it that close. When I use Pedalboard Planner I always end up failing to allow for stuff like cables and power jacks, and it never comes out anything like I sketched.

What do the modded extra knobs on the Micro POG do?

Adds a second channel to the Micro POG which you can switch back-and-forth with the original (top row) settings.

MattLeFevers said:
I'm impressed you got it that close. When I use Pedalboard Planner I always end up failing to allow for stuff like cables and power jacks, and it never comes out anything like I sketched.

What do the modded extra knobs on the Micro POG do?
Click to expand...

Yeah but the biggest problem I have with Pedalboard Planner is that I keep changing what I want to put on there. You did way better than I have ever done.
W

Maybe try the pancake cables, i've never had experience with them but you just may be able to pull this board off. Love that you fit this all on a PT JR. It makes me confident I can fit more on my board

Hey everyone, I'm one of the lead players at centralonline.tv. Here's a shot from a recent service: 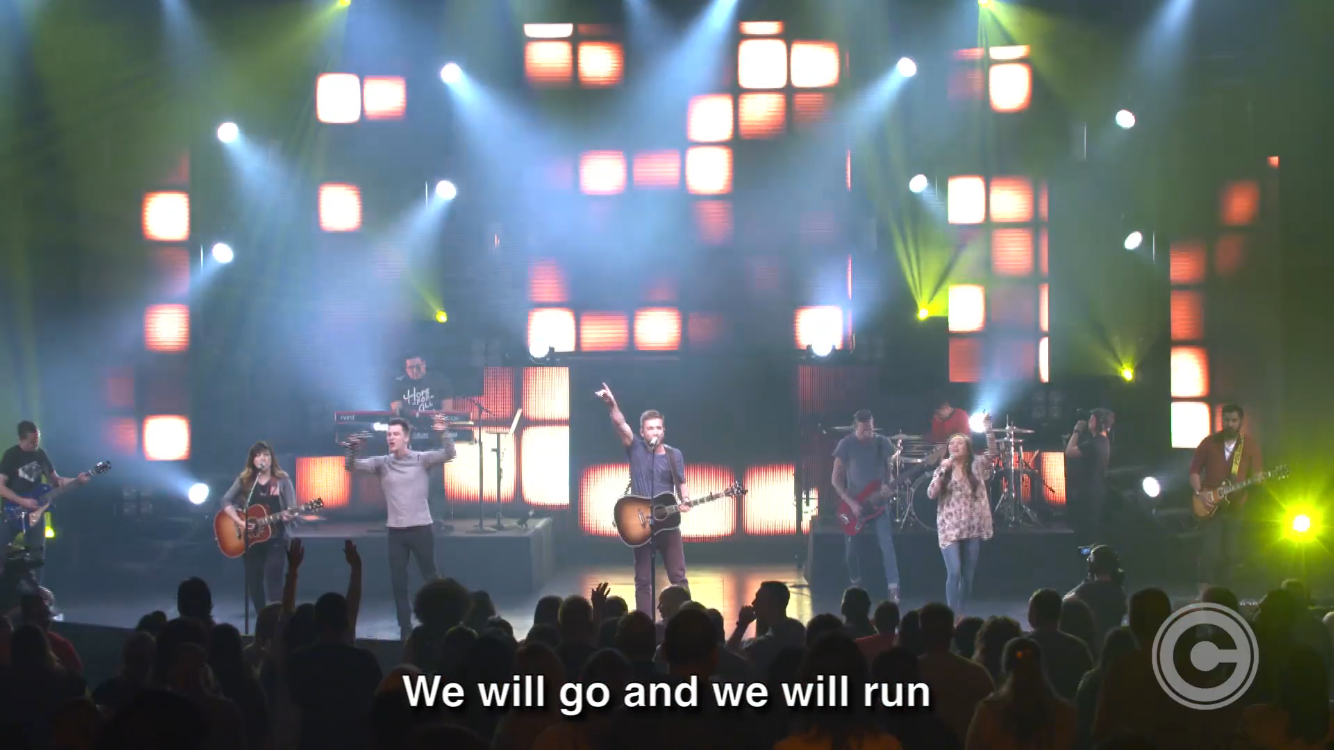 I wanted to give an update to my rig on here. A couple weeks ago I ditched the amplifire after only using it for a couple weeks, and went back to my old faithful, the kemper. I think I had to get over the fleeting joy of thinking I could replace my kemper with a pedal in order for me to realize that the amplifire just doesn't measure up to the kemper, even with the mbritt presets. However, using the amplifire's fx loop reminded me how nice it was to have pristinely clean delays and reverbs by running them in the loop rather than into the front. So I built a 25' cable loom using nylon mesh with 3 1/4" instrument cables and a 25' IEC cable. Makes setup and teardown super fast and easy with no tangled cables, and the whole thing coils up nicely in the back of my 3 space rack which weighs like 22lbs with the loom coiled up inside. Everything is powered from one power cable (keeping noise down) and a 1-to-2 splitter which is zip tied underneath the kemper so it's out of the way. You can see the loom on the left and the power setup on the bottom right side of this picture: So here's a bedroom shot of my updated board. The wireless receiver has a built in strobe tuner, and you can make it "always on" so I can still just use my volume pedal to tune silently which is a lot nicer than having to hit a button and mute everything. So if I notice something is out of tune I can tune up almost instantly with almost no interruption in sound. The whole thing is dead quiet thanks to the kemper's 4 ground lift switches and isolated power for the board from gigrig. I power everything with the gigrig system because it's a lot more flexible and light than the brick options from voodoo labs and others. I started making some videos because it seemed like a lot of the P&W videos on youtube have just awful tone and most of the time the parts are totally wrong. Check out some of my tones and let me know what you think. Here's my most recent video:
Here's a video of a service at my church in Las Vegas (Centralonline.tv) in which I'm playing lead, so you can hear some of my live/unedited tones. The first song starts right at the beginning and has some great lead parts:

trying to hold myself back from posting an updated board pic until my on-order stuff actually arrives... and it's killing me!

had fun yesterday at a benefit but they might need to come up with a better word than 'sunburned' to describe me today
Click to expand...

Outdoor gigs are rough! I can never see the LEDs on my board!

NHBluesMan said:
trying to hold myself back from posting an updated board pic until my on-order stuff actually arrives... and it's killing me!
Click to expand...

Me too, I actually got everything but need to set it up yet, that and Ive been sworn to secrecy

-Empire said:
Outdoor gigs are rough! I can never see the LEDs on my board!
Click to expand...

the Morning Glory and Deep Six posed no trouble

MXR CC has a bright LED. Walrus Voyager, too!
X

Here's my relatively small church board:

Played for the first time stereo in our church today. I will never going back again (unless I have to) - the difference is incredible!