I emailed PTD several times to order a pedal. I received nothing back.

His site seems active. how are folks getting his pedals?

TopDog said:
I emailed PTD several times to order a pedal. I received nothing back.

His site seems active. how are folks getting his pedals?
Click to expand...

He’ll list a pedal that he’s decided to build on his site‘s store section when he’s built it and it’s available. It’ll usually be a single pedal, it’ll be expensive - in line with or more than the used prices you’ll find - and it’ll probably sell out immediately no matter what it is. All of this will only happen sporadically.

You can’t email to order anything. And there is no more list as there was in the past.

If you’re after something specific, it’s best just to look for a used one.
Last edited: May 29, 2020

he needs to clean up his site

text boxes on top of text boxes. its darn near impossible to read the store page.

edit here is what it looks like to me. i have no trouble with other websites

Paul’s work is phenomenal. Attention to detail is insane. The tones his pedals put out never falls short of the mark. Add those up and there’s no surprise that they’re expensive, hard to get and highly desired. Love my Trombetta’s.

Tonefree said:
Paul’s work is phenomenal. Attention to detail is insane. The tones his pedals put out never falls short of the mark. Add those up and there’s no surprise that they’re expensive, hard to get and highly desired. Love my Trombetta’s.
Click to expand...

Agreed. The Rotobone is the best fuzz ever made. It’s my desert island pedal. 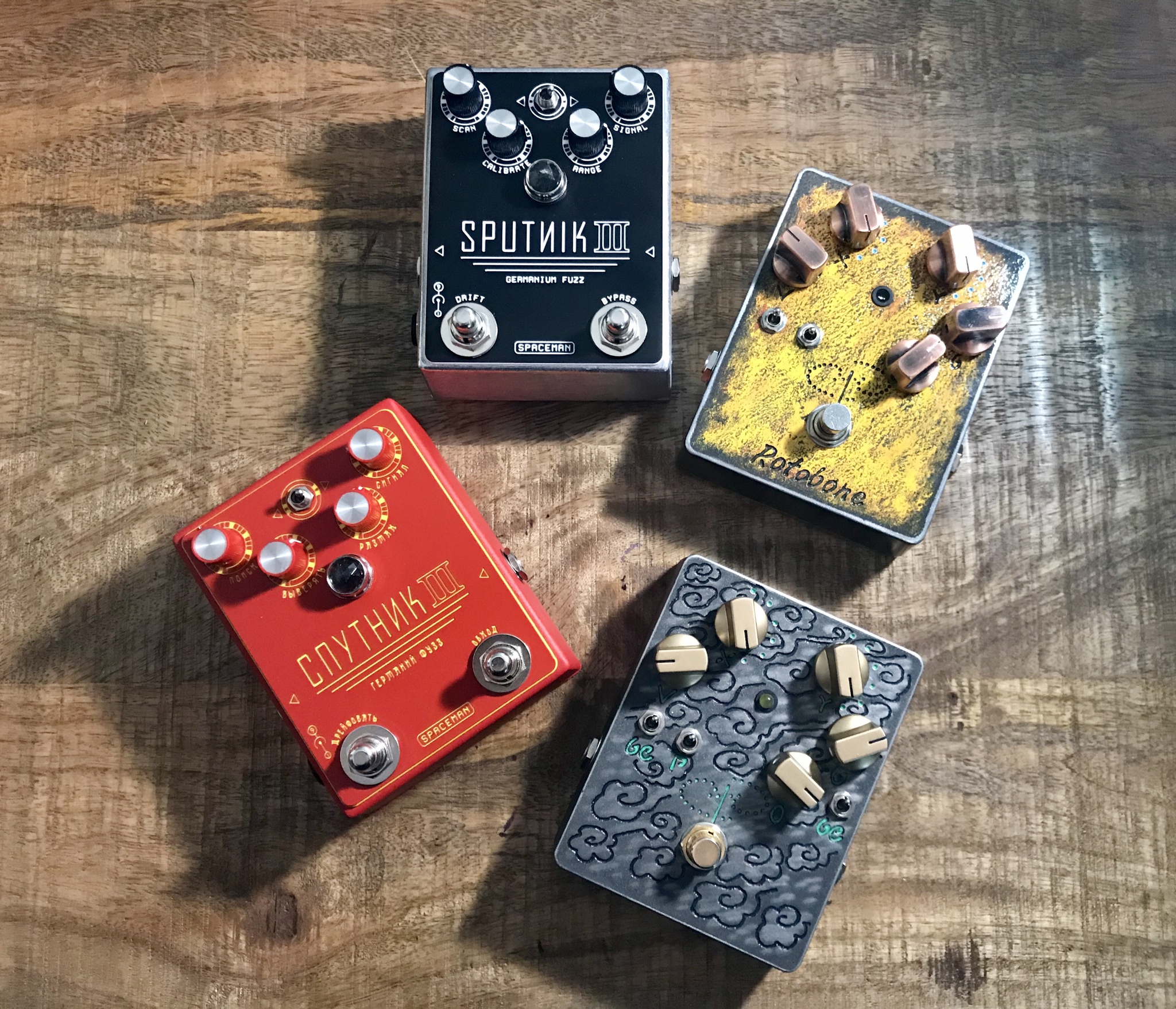 Wow, Thanks for the replies.

I guess he's the Dumble of pedals.

TopDog said:
Wow, Thanks for the replies.

I guess he's the Dumble of pedals.
Click to expand...

He had reached an unhappy dilemma about his fuzz boxes. A good number of people, like myself, could get on a waiting list and buy a pedal in the near future. First time I bought one it was 2 week turnaround. Then the word got out how unique and exciting his work was. The next time I order it was nearly 4 months. The next year it was 2 years, then finally my last order took 3 years to reach top of list. During this time he really made this about customer satisfaction, cool finishes, move jack from side to top, try things to experiment and improve the products. On top of all that he let us begin ordering multiple pedals in one order. He was really covered up in fuzz requests and it was taking over his time and managing emails about orders begun long ago, you can imagine it becoming a source of stress. He even managed to keep the price point attractive for what you got, most I ever paid for an elaborate device was $350, my first was $175. Of course as his stress was expanding, pedal flippers were putting up day old Rotobones bought for $325 for $650 on eBay. And getting it. Routinely.

he finally decided that was his money, a new pedal was making an opportunist $300 and he certainly wasn’t clearing that much per box. So making a truly boutique unique world class analog device had trapped him in his own snare.

Pauls simple solution, make any fuzz he cares to whenever he wishes and sells one a time for between$700-1100 bucks. And getting it. Routinely. It was nice while it lasted, but our own pedal mania drove this story.

He doesn't ship to Canada so he doesn't exist to me.
T

Paul is by all means a great designer and even better person from what I've heard. If it were up to me, I would've scaled production on some of the models (esp once he started using the printed enclosures). I think he's come up with some really cool original designs in terms of his fuzz work. They are good sounding with exceptional attention to detail but are not the end all be all for me.

I bought a used Bone Machine on Reverb. Price was on the lower side because seller mentioned a sticky switch. I emailed Paul about the switch and he told me how to fix it or offered to fix it if I wanted to send it to him for a nominal fee.

I have yet to experience switch stickiness and I just love the pedal.

I Drink and I Know Things.

I personally find Paul's business model to be insanely frustrating. The two pedals that I bought from him years ago were outstanding but like with most of us gear hounds, I foolishly sold them to fund other purchases. My mistake. I didn't think that the door would slam shut on the wait list the way that it did. Paul is free to run his business any way he sees fit. Good for him if this method works for him, he puts so much time & energy in to what he produces that I can see how it could wear him down over time.

My own opinion remains that what did Paul in was allowing people to buy 4 pedals at once. This allowed an avenue for the little "see an opportunity" ontraypranoors to buy 4 pedals, sell three for inflated costs, keep one and still clear cash in the pocket. That overburdened him. And it made it much easier for him to grow weary of the rat race of sole artisan/businessman and say "F it".

But, that's just my opinion. I don't see inside Paul's head.

I was about a month from coming up on the list again. Pity, but I fully supported his decision then and continue that feeling, having gone through it personally many years ago with a different type of handmade object.

They sure are great pedals. I've had my Rotobone on the board this week and it is simply a joy to experiment with.

This seems like a situation where someone might outsource production or maybe license their designs to other builders. I totally get his frustration with the situation, but if I were him and knew there was still a demand for something I worked so hard to create, I’d still want to see my product inspiring new music and making people happy, even if I were over being directly involved in the process.

tonedover said:
he needs to clean up his site

text boxes on top of text boxes. its darn near impossible to read the store page.

edit here is what it looks like to me. i have no trouble with other websites

What difference does it make if he's able to sell any/all pedal(s) he builds with no problems?

chankgeez said:
What difference does it make if he's able to sell any/all pedal(s) he builds with no problems?
Click to expand...

uh i mean, i guess none. Takes me out of his potential marketplace, not that he’s hurting for sales.

just seems to be a crummy trend with a lot of these uber-boutique guys. They are not terribly into the long term haul, as long as present day sales are successful...

Id say its about having business saavy, but u would counter that he has no problem selling all his product, and you would be correct.

I can sympathize with your frustration.

TopDog said:
I emailed PTD several times to order a pedal. I received nothing back.

His site seems active. how are folks getting his pedals?
Click to expand...

I have several of his pedals and he is always quick to answer questions. But likely as others pointed out, if you are looking to buy, you may need to take another avenue.