I have a Peavey DB 115 that may have been produced ~2 yrs. ago. It's shortly after the move to China. It has a Stephens 15" speaker which I had never heard of prior. Upon research, there's info on the old Stephens audiophile speakers of the 30's to 50's (???), but I can't find anything referencing circa 2014 production.

I know prior to the Stephens, Peavey used a 15" Blue Marvel which is their brand (though I don't know if it was produced by Peavey or outsourced).

Now I see they are using a 15-inch Celestion Fullback (a fairly new speaker).

My question is one mostly of curiosity, since I am pleased with the sound I get from the Stephens, BUT:
1) Does anyone know the recent history of Stephens speakers (circa 2014) and what prompted Peavey to change to them from the Blue Marvel?
2) What prompted the most recent change from Stephens to the Celestion (other than guessing cost)?

Peavey used Stephens Speaker in the Vypyr Pro as well

Peavey acquired to the rights to the Stephens "Tru-Sonic" Speaker brand name a few years ago, and a few old baby boomers recognize this as a former prestige Hi-Fi speaker brand from the late 1950's 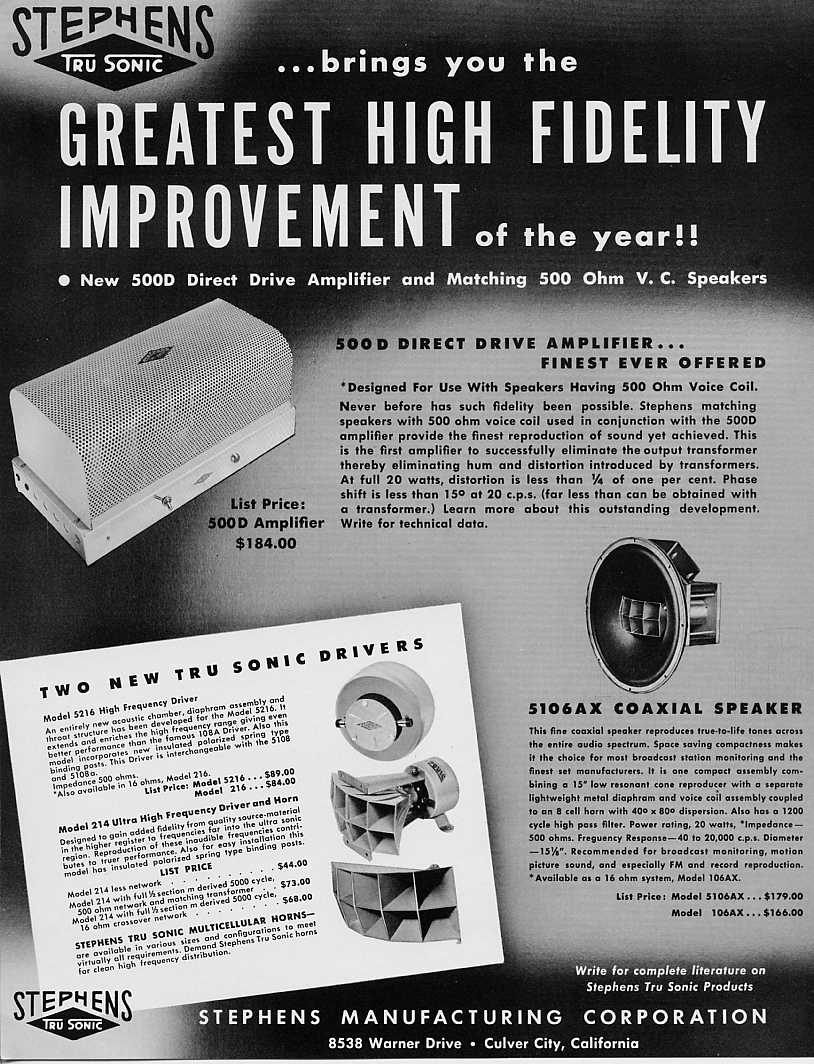 Stephens-Trusonic, Inc., based in Culver City, California, had a reputation for high quality audio products. In 1957, Bert Berlant and Bernard D. Cirlin took over the company. The two were friends with Charles and Ray, and drew upon this friendship to enlist the Eames Office in the design of new loudspeaker enclosures.

These images show four of the models that the Eames Office developed. Two Eames Office enclosures were put on the market.

Berlant and Cirlin were very happy with the results, as indicated in this excerpt from a 1957 Industrial Design magazine article:

“Initially the Eames enclosures were not to set the world on fire or sell by the carload, but simply to impress the industry with the imagination of the new management.” They feel that the new designs have done just that, and that there is a resultant industry-wide attitude of “look-to-Stephens-for-the-new-and-unusual,” which is exactly what they wanted. Furthermore, the Eames speakers, originally figured to represent 3% of annual sales, already represent 7%.”

Those Eminence made 16 ohm Blue Marvel 15" are some of the best sounding 15s I have played through for guitar.
BTW Peavey have basically moved all their production to China. I'm not sure they even make the Black Widow and Scorpions any more.
T

I prefer the older PV speakers... Scorps and BMs to be precise... over nearly everything else, except for maybe an old weber produced Scumback that I own.

Just my ear maybe, but I have waded through the G12H30 Anni, Greenbacks, v30 types and always was disappointed with the outcome..

IM4Tone said:
.....My question is one mostly of curiosity, since I am pleased with the sound I get from the Stephens, BUT:
1) Does anyone know the recent history of Stephens speakers (circa 2014) and what prompted Peavey to change to them from the Blue Marvel?
2) What prompted the most recent change from Stephens to the Celestion (other than guessing cost)?
Click to expand...

So...I'm inferring from responses that:
1) The change from Blue Marvel (actually produced by Eminence) to Stephens was coincidental with the move to China and only relative to the old Stephens brand by name only. Probably a combination of logistics and $$$.
2) Since the brand name Stephens is not well known to most current guitar players, the new Celestion was adopted due to it's brand name familiarity and/or reputation.