Poo Poo all you want, my #1 is a '72 Deluxe Goldtop routed out with Shaw pickups, resonates, sustains, and sounds incredible.

Just like every mass-produced instrument, IMHO, there are good ones and then there are bad ones. I had a '73 Deluxe cherrybust/3 piece top that was an incredible guitar. Played like butter and had sustain for days...no matter what pickups I had in there. I made what I consider as the worst mistake with it...installed a Kahler and (roughly) routed a humbucker into the bridge....and it still was a tone machine. Sadly, it was stolen from my house outside of Nashville (along with some other Gibby's and a Fender Champ). I haven't found a Gibby like it since.
L

I had a '70 LP Deluxe for about 15 years. I never have liked the sound of a Les Paul, but this one sang. It had the shallow top carve, and the volute, and the pancake body with a mahogany neck, but it played perfectly. If it had not been a boat anchor I would have kept it...but I'm not really a solid-body guy anyway (its replacement is my 335).

Personally, I think judging an instrument by its year of manufacture is inane. Fun in a pub, maybe, but useless in finding a treasure. Good, bad, and great instruments have been built during all years by all brands.

I suppose the phenomenon of buying guitars off the internet has led people to believe they can use the year as a way of finding "the" one. Ain't gonna happen: you have to play it first.

my main guitar has been a 1977 LP standard. put duncans in it and 6100 frets. It's been absolutely amazing for me for over 20 years. Neck solid as a rock, sounds amazing, plays amazing. I 've owned and played enough to know this one is as 'good' as any other. They are all different. To generalize about an entire decade is silly. My LP gets great note bloom, haunting mids, is full bodied, well balanced with a nice finish. After all, it's wine red.

My 1977 Les Paul sounds and plays great - it has the best combination of action and intonation of any guitar I own. However, it weights a ton and has a sunburst top that is affectionately referred to by some TGPer's as a "clownburst" finish. 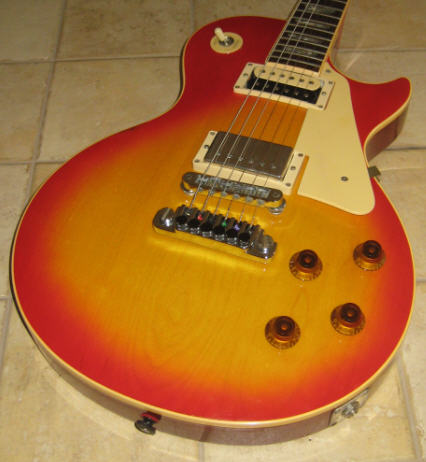 My '77 Pro is awesome (and was just fine stock btw), but here's another observation. I got a '77 SG a while back and it looked like the binding was separating off the bottom of the board. I took it to the shop and apparently there was no glue holding the fretboard onto the neck. It had only been held in with the finish and the board was actually starting to come off. Needless to say, the guitar sounded a heck of a lot better once the board was glued back on. Who knows, though, maybe stuff like that happened in the '50s too. The people I've talked too (like the guy who fixed my SG) who have dealt with Gibsons for a long time definitely have a negative bias towards the '70s instruments, though.


I have a 74 Standard, all stock that I gigged for years with. I still love her to this day (have many more guitars now however so this one is retired)

2) I have a '70-'71 so called '58 (really '54) Goldtop reissue (p-90's, stop tailpiece, non-pancake body,etc) which is Norlin and a good guitar-didn't have the "Norlin" features spoken of here since it was a reissue but proved to me at least that one can snag a nice one from that era
Click to expand...

I have a one of these too, only in cherryburst that has aged to an almost
orangeish/deep cherry. Neck is as stable as they come. Deep, dark and I believe Brazilian board, although some will disagree with this.
Mine was made in late 71 and not part of the original re-issue. These were made for the store I bought it from in Kalamazoo and only 6 were made. 3 of each finish.
P

Other than changing strings, mine is as it came from the factory in 79.
S

My 74 standard I've owned for 25 years is far from stock.....pick guard broke while playing it at a gig, pickup rings cranked, pots wore out and frets worn away so refretted.
Yep so bad I had to mod the crap out of it.....
D

Many years ago I used to play a great playing and sounding LP Custom from '77 or '78. It was very heavy however.

The jazz models like the L5, Super V and Super 400 from the Norlin era also have a somewhat lesser reputation. Like with the LP's, this doesn't mean that they didn't make good instruments in this period. I still have a great Super V from '78 that has an excellent build quality, tone and playability. It is an Original Gibson Prototype made in the Kalamazoo plant however, so this might make a difference.

(Disclosure: the Super V is in the Emporium, because I haven't played jazz for ages and our daughter needs a piano.)

I recently went on a Goldtop search...wound up buying 3

after the proverbial "shootout", I kept the '78 Deluxe

icing on the cake: it was the cheapest of the 3, looked the coolest AND it's not even that heavy---feels like a normal LP...my '93 Studio is WAY heavier than the Deluxe but it's a keeper, too (bought that one new and it's one of the best LPs that I've owned)
Last edited: Dec 23, 2013

sixty2strat said:
My 74 standard I've owned for 25 years is far from stock.....pick guard broke while playing it at a gig, pickup rings cranked, pots wore out and frets worn away so refretted. Yep so bad I had to mod the crap out of it.....
Click to expand...

Cool, not was I was implying. Just noticed a trend. I want a mahogany necked, HB equipped old gold top. So, it'd pretty much have to be a modded Deluxe.

Needless to say this was not a typical Norlin example, though it has hallmarks, the cutaway shape, the three lam neck, and the logo. But Gawdang does this sound good. I saw it new on the back wall of a store where I had just started working and fell in love. A guy working in the warehouse was quicker than me and bought it. I made sure to make friends with him, and a year later it was mine.

27sauce said:
Cool, not was I was implying. Just noticed a trend. I want a mahogany necked, HB equipped old gold top. So, it'd pretty much have to be a modded Deluxe.
Click to expand...

No, I understood what ya meant. Mine is not really moded but it is missing a lot of parts it came with. Rule of thumb for me :most "MINT" old or Vintage guitars never seem to be "special". Which means you have to ask were they just ok so no one liked them or does years of giging bring out the best? A buddy has a mint 58 strat and I think my 79 with all the dings chips fades and rust I put in it for 30 years plays WAY better and sound pretty similar.
D

I think it's funny that some consider this the **** era of Gibson. Even if it is, the best players in the world were buying these guitars and recording on iconic albums with them and also becoming their favorites in many cases. The proof is in the pudding. Great guitar sounds were coming from these so called **** guitars.

The 70s were some dark years for more than just Gibson and Fender, and more than just guitars. Anyone remember cars and appliances from the 70s? Even bicycles were a little strange. Like anything else, each guitar should be taken as an individual. There are plenty of gems and turds to be found in every decade.

It's really a case of over generalization covering a decade including a change in manufacturing facilities and all sorts of internal chaos at Gibson.
It's not until the latter part of the decade that it manifests itself in questionable design and manufacturing. Although, you could still find some products that functioned and ovbviosly they're still around. But, the early 70's LP's , heavy as the are, are still some of the best sounding planks that came out of K'zoo.

Needless to say this was not a typical Norlin example, though it has hallmarks, the cutaway shape, the three lam neck, and the logo. But Gawdang does this sound good. I saw it new on the back wall of a store where I had just started working and fell in love. A guy working in the warehouse was quicker than me and bought it. I made sure to make friends with him, and a year later it was mine.

Gotta say IME the Heritage 80 LP's were great and not typical of Norlins.

I've owned six Norlins LP's, and they all shared a few characteristics; heavy, non resonant, and did not look that great. Every single one, and all the new or used ones I played back in the day, all had those flattened frets and really needed a refret to be really playable. Also none of them sounded like the classic clean/semi distorted LP tones of years past, despite many pickup changes. They all would do great metal tones though.

One of the LP's, a early seventies Custom with a 3 piece mahogany neck, was pretty good, but still did not get there. All the Norlins were eventually sold and not missed for a second.

My current LP is a bone stock 2010 Trad Plus bought unseen, and it has satisfied every LP wish I have had in 30 years of dreaming of them. It just makes my Norlins memories seem worse. Gibson finally remembered what made the fifties LP's great (one piece mahogany necks, one piece mahogany body under the maple, light weight, non flat frets, great pickups) and started making them that way again.