I recently posted about how blown away I was by a set of Porter pups that came in a used Palir strat I picked up many months ago. For some reason, these are just the perfect strat pick up for me. While I do enjoy some other makes, including my '62 vintage strat, and I have really enjoyed Lollars and other similar boutique pickups in Strats I have owned, as well as loving Fender CS strat pickups, these are quite different. They are remarkably clear and articulate, lively and warm, with a beautiful musical quality. Although undeniably stratty, they are also quite different, to me in a good way. I think the you tube vids floating around out there do a pretty good job, but like with most gear, you need to hear it in person to get the best idea of what it going on.

So, because I like the Porter S-styles so much I got a set of Porter 9T's and put them in a Fender CS tele that had the CS nocasters. The CS nocasters are some of my favorite ever tele pickups, and I have them in another guitar that I would never change in any way. However, in this particular guitar, something was missing (if you know what I mean, and I know a lot of people here will). Just was a little thin or something. While the guitar is really light and resonant, and sounds great acoustically (really, really great) it just wasn't being translated through an amp at practice.

I also opted to purchase and install an Emerson 4-way tele wiring kit, which adds the series setting ... or parallel ... whichever it is. This setting adds a very fat sounding, almost humbucker type sound to the palette. I realize buying the kit is the less economical way to do it, rather then getting the parts and wiring it all up yourself, but I am not that great at this stuff, and it saved me a ton of time and troubleshooting. 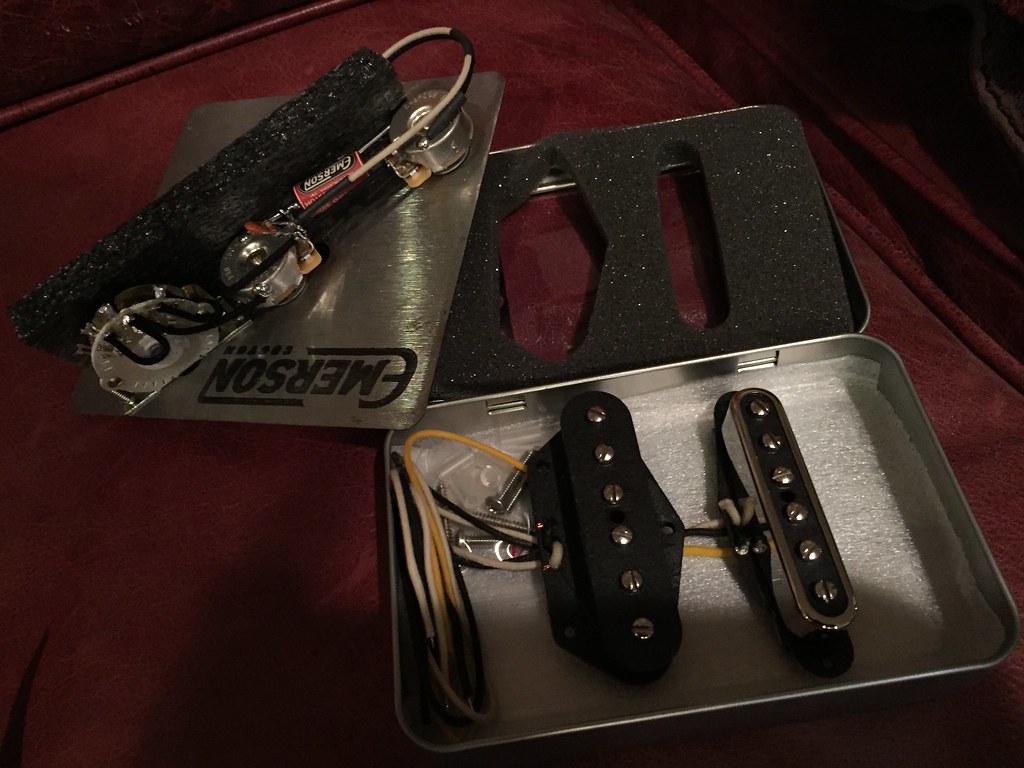 Anyway, I immediately loved the way they sounded, articulate, clear and fat, all at once. Not really like a traditional P90, to me, but like a fat, clear single coil (which sounds like the description of a P90, doesn't it... I can't explain it though, these are different to my ear - maybe because they are in a Tele body, who knows). So it is not a traditional tele sound, but still a very heavy Tele flavor - for this guitar it seemed a massive, immediate improvement, and that is not always the case for me when I swap pickups. Sometimes it is even a step backwards. Of course I was skeptical, because it is not infrequent that something sounds great in your house, at first pass, but you get to practice and you can't get it to work in the mix.

Well, from the second I plugged these into the amp at rehearsal, they just gave me that sense - you know how you just get that warm, happy, yay this thing just sounds like heaven feeling about a guitar/amp set up? When every note you hit just makes you happy all over? When it reminds you of that old strat or old 330 through that old bassman you used to rock in college, that just always sounded spectacular? You old guys know what I mean. Well this does it for me. Sounds great from soft to loud, and all the switch settings are useable and great. The series setting is particularly cool - nice and fat and thick, but still very clear and articulate, very close to a humbucker sound. The neck alone setting is very neck-tele-pick up-like to my ears, with a bit of a stratty tone (that I think a lot of neck tele pick ups exhibit). The bridge screams, and does still have a bit of twang, but less so, and is considerable thicker then most tele bridge pick ups. Very rich sounding. Chicken picking still sounds great in this position.

I don't know what it is about these pickups, really, but they turned a beautiful tele with a great feel and lots of resonance from a good instrument into an amazing singing monster with chimey, clear cleans and violin-like warm fuzzy dirt.

One thing to note, I had to wire in an extra bridge-string ground, suggested on the Porter site, because the bridge 9T does not have a metal back plate like a trad tele bridge pup, so there is not natural ground there, and mine was buzzing like a... well, whatever buzzes a lot... until I did that.

I know they won't work for everyone (even though I can't imagine that - they seem so perfect to me - but everyone's ears are different), but I am so glad I ran across these. I will be trying out various Porters in a couple of my other axes, even though I wasn't initially going to change the pick ups in them, just because I have a feeling they might put them over the top into that la la land of orgasmic tone which is so hard to find, and so worth the trouble when you do hit on it. I am pretty sure that is why we are all here? (I mean on TGP, not on the planet, lol.)

Here are some pics of the transition: 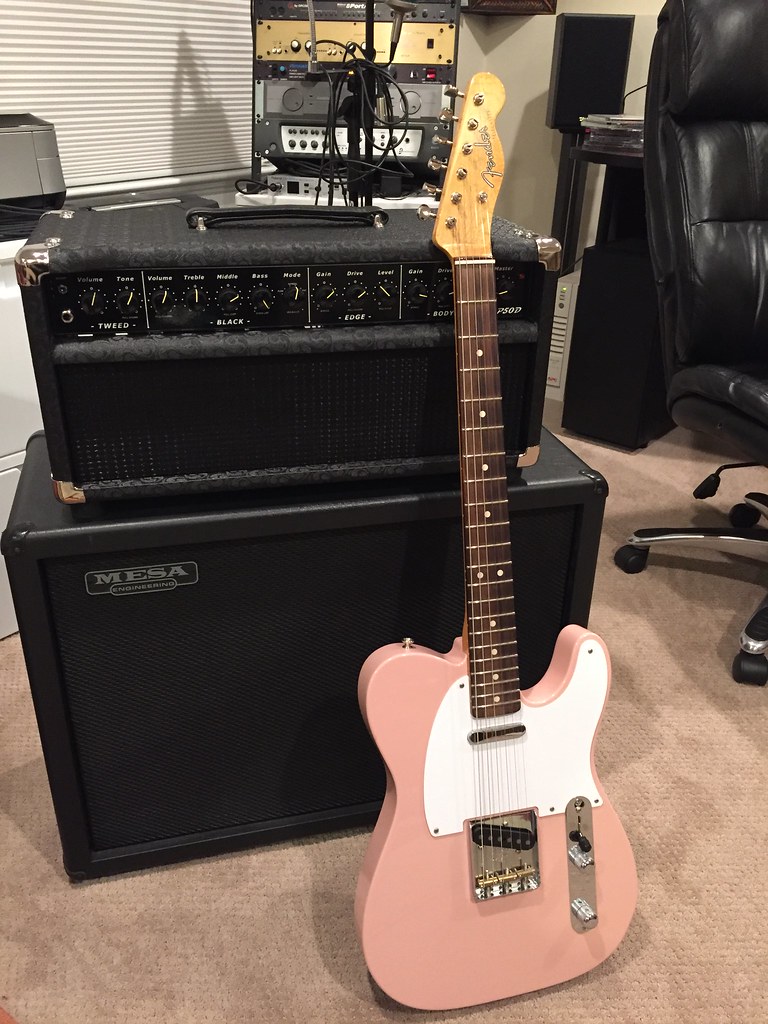 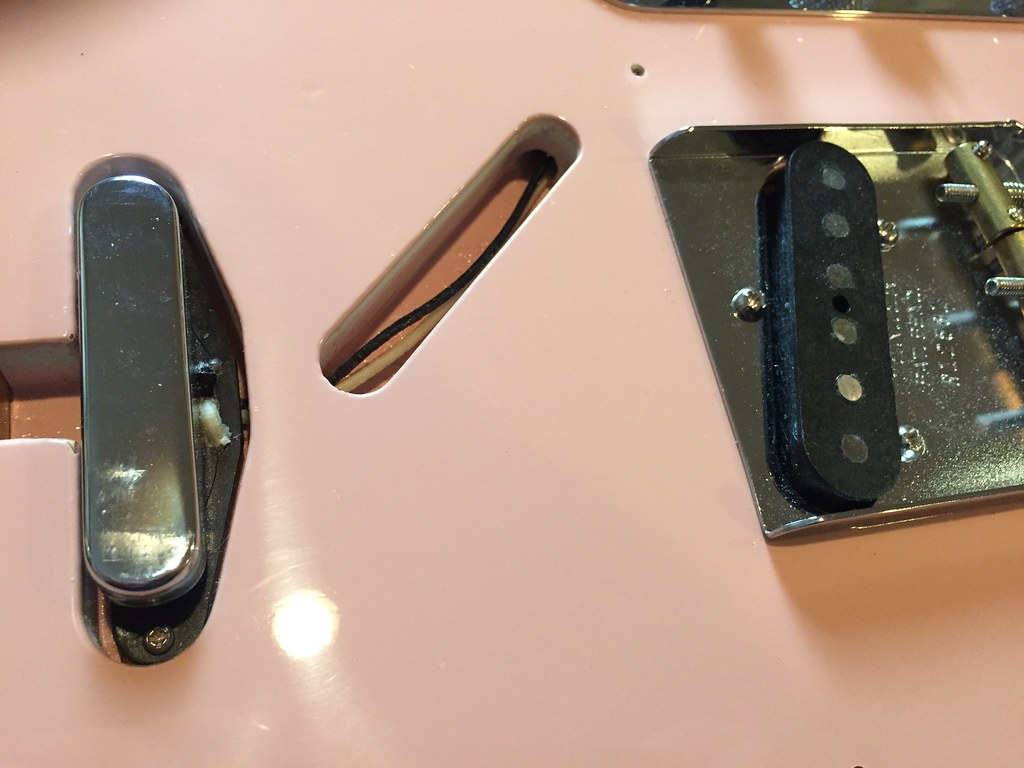 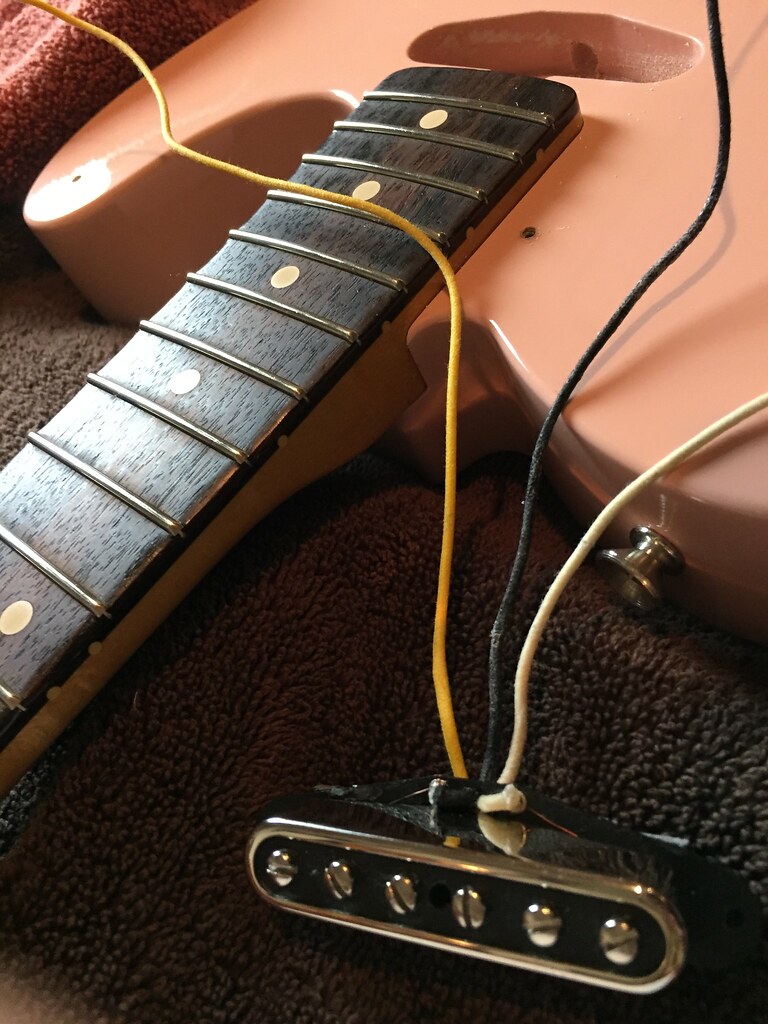 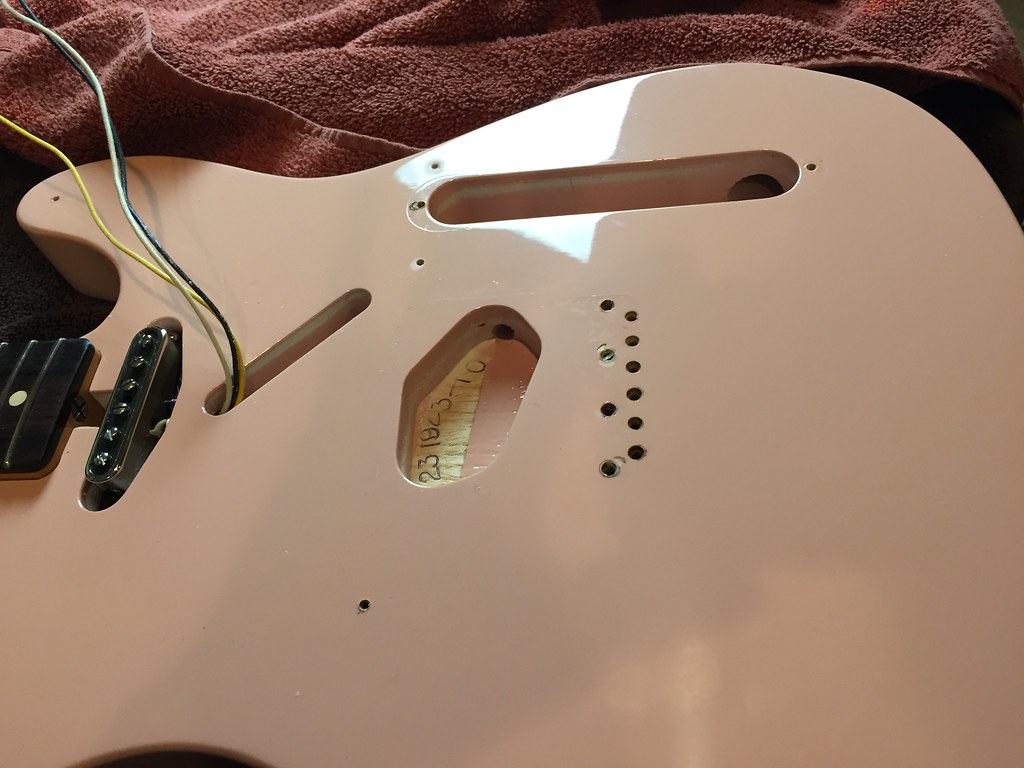 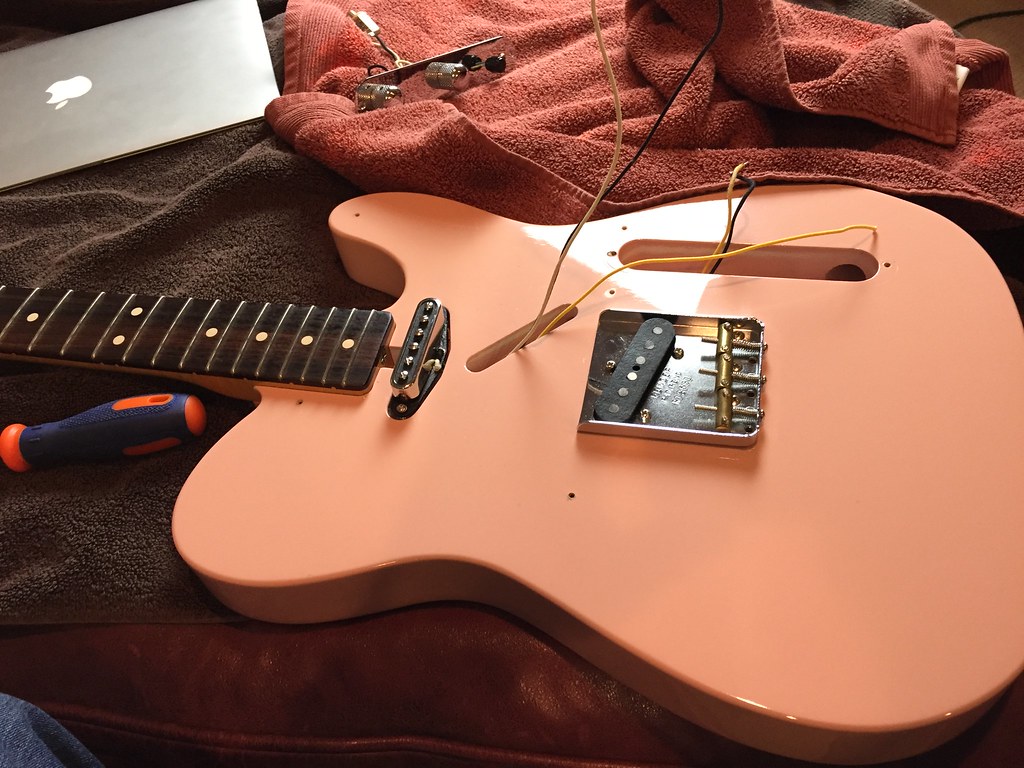 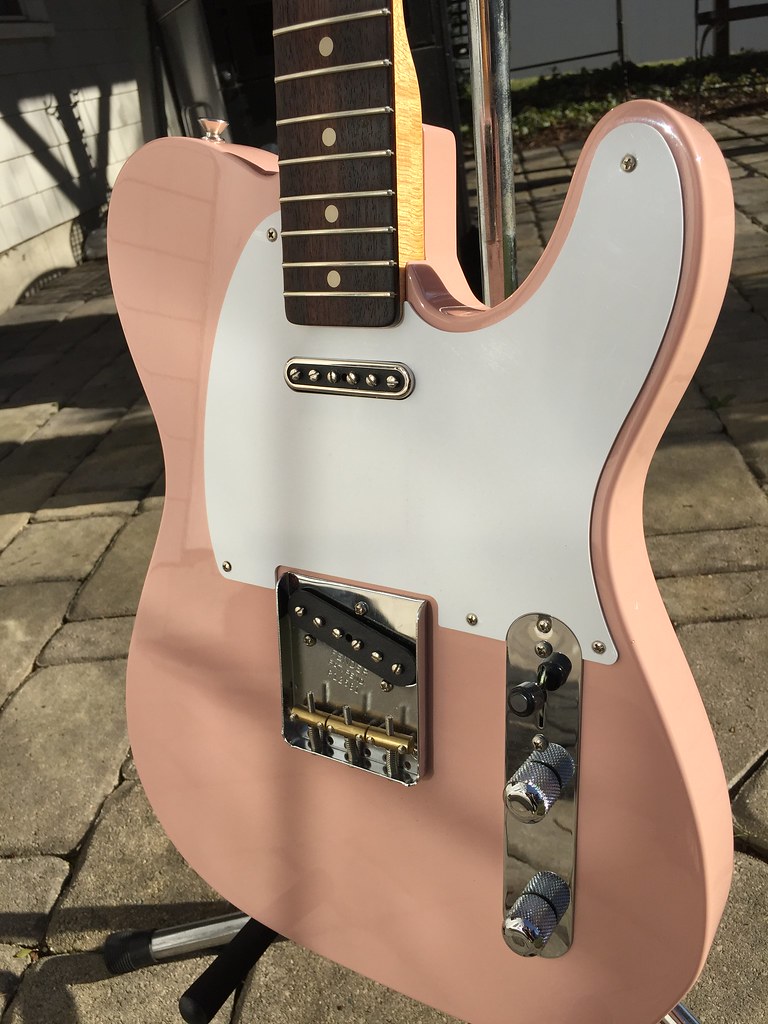 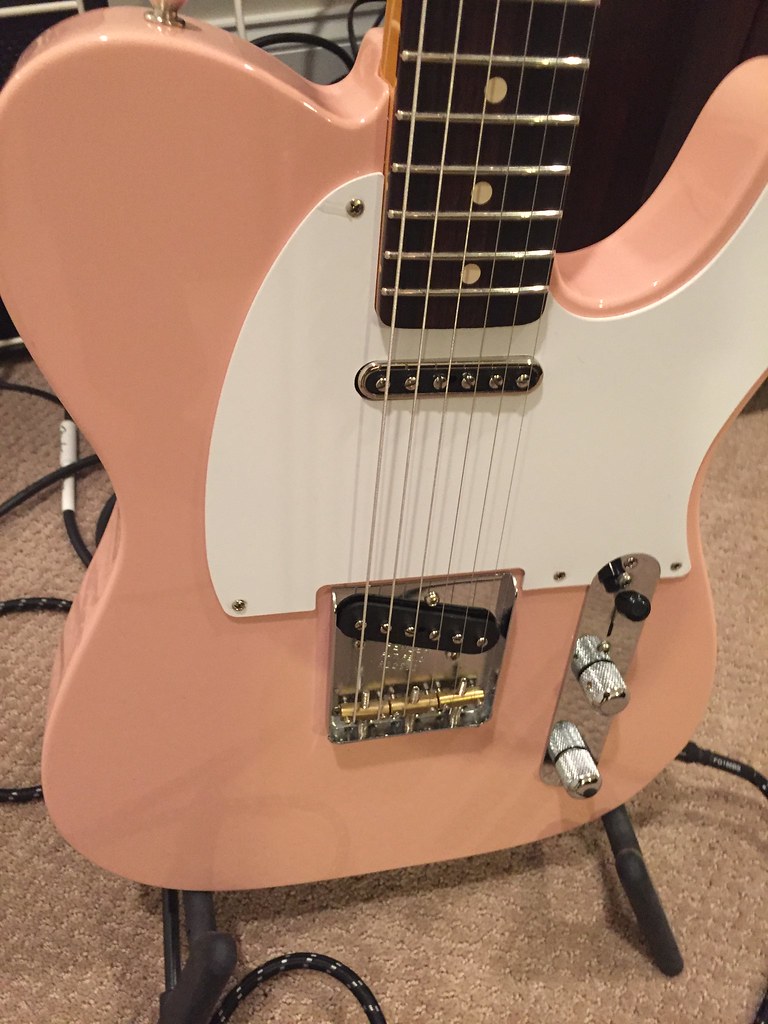 Nice review. I've been curious about those.

Also, that tele is fire.

I've crowed about Porter pickups to anyone who'll listen for a while, now.
Brian Porter is a phenomenal pickup builder who really LISTENS to what his clients ask for, and always delivers.
His shop should be considered when anyone is thinking about Lollar, Bare Knuckle, etc.

I have a set of Porter Custom Tele pickups that I bought off the emporium sometime ago. They're in a partscaster...and they ain't comin' out! Not quite as much twang in the bridge pickup, but there's a lot of tones from that one pickup (twang too!). The middle position just rings like a bell and the neck pickup sounds fat but clear.
These two videos are what made me buy them.

Good review, as a confirmed pickup junkie, I love to try new ones.

I have a set of Porter Custom Tele pickups that I bought off the emporium sometime ago. They're in a partscaster...and they ain't comin' out! Not quite as much twang in the bridge pickup, but there's a lot of tones from that one pickup (twang too!). The middle position just rings like a bell and the neck pickup sounds fat but clear.
These two videos are what made me buy them.
...
Click to expand...

Nice playing! Those sound great. I would definitely rock those in a tele, for a bit more of a trad sound.