Q for the experts - Tesla vs JJ 12AX7 - structural differences ?

the title says it all, how to tell them apart (not counting the print) ?
feel free to add any other relevant info ...

First relevant issue is that neither JJ nor Telsa called them 12AX7s (the American number). They call(ed) them either ECC83 or ECC803S (the European number for a 12AX7). Then there's the issue of multiple versions of the Teslas. So which of the JJ versions are you thinking of? First thing you might want to do is pull up photos of each and notice the differences in plate appearance/size to get a foundation.

This page will help:
http://www.jacmusic.com/tesla/tesla-jj.html

thanks Mike !
you're right about the ECC83 thing, of course. Bad habit of mine, sorry ...

Let's assume I don't know much about Teslas ...

I'm aware there have been RFT style Teslas, but have not even found out if they were rebranded RFTs or CZ made copies. I have lots of RFTs, labeled and OEM, so far I've believed them to be an easy ID.
But if Tesla actually made RFT copies - time to re-think maybe ?

I'm aware they made ECC803s, which obviously have a JJ equivalent. Differences ?

And I've seen lots of pics of Teslas looking like garden variety JJ ECC83S, but most pics are worthless by focusing on the print instead of the internal construction.

thanks Timbre Wolf !
I've seen the page you linked, but most of it seems to refer to E88CC, and the rest is a bit vague.

So NOS TESLA tubes have cathodes from Rosnov, and where JJ has their cathodes from today, I don't know. This is one difference.
Click to expand...

all well and good, but how do I tell them apart ?
The story about the 20 flaky JJ E88CCs does not mirror my personal experience with JJs, not counting the odd faulty tube they are what they are fwiw, but pretty consistent at that.
Ime ...

For some strange reason I have original samples of most major EU made tubes, and a few US ones, which I use to compare OEM stuff to, but not a single Tesla yet.
Are they even worth looking for, if so - which ones ?

so keep the info coming guys, let's try and make this thread a decent reference ...

and about the gold pins mentioned on that Tesla page - do they really make a difference ?
with audio connectors I have found them to be snake oil for the most part, unless we're talking installation in a swimming pool.

ProfRhino said:
all well and good, but how do I tell them apart ?
Click to expand...

Forget about paint - that can be faked, and has been faked. If you're comparing the similar-looking Tesla E83CC and JJ ECC83-S, however, there are some tel-tale structural differences that you can learn to look for at a glance:
You can see both features by comparing these photos.

If you're interested in their long-plate tubes (ECC803S), then there are these to compare: 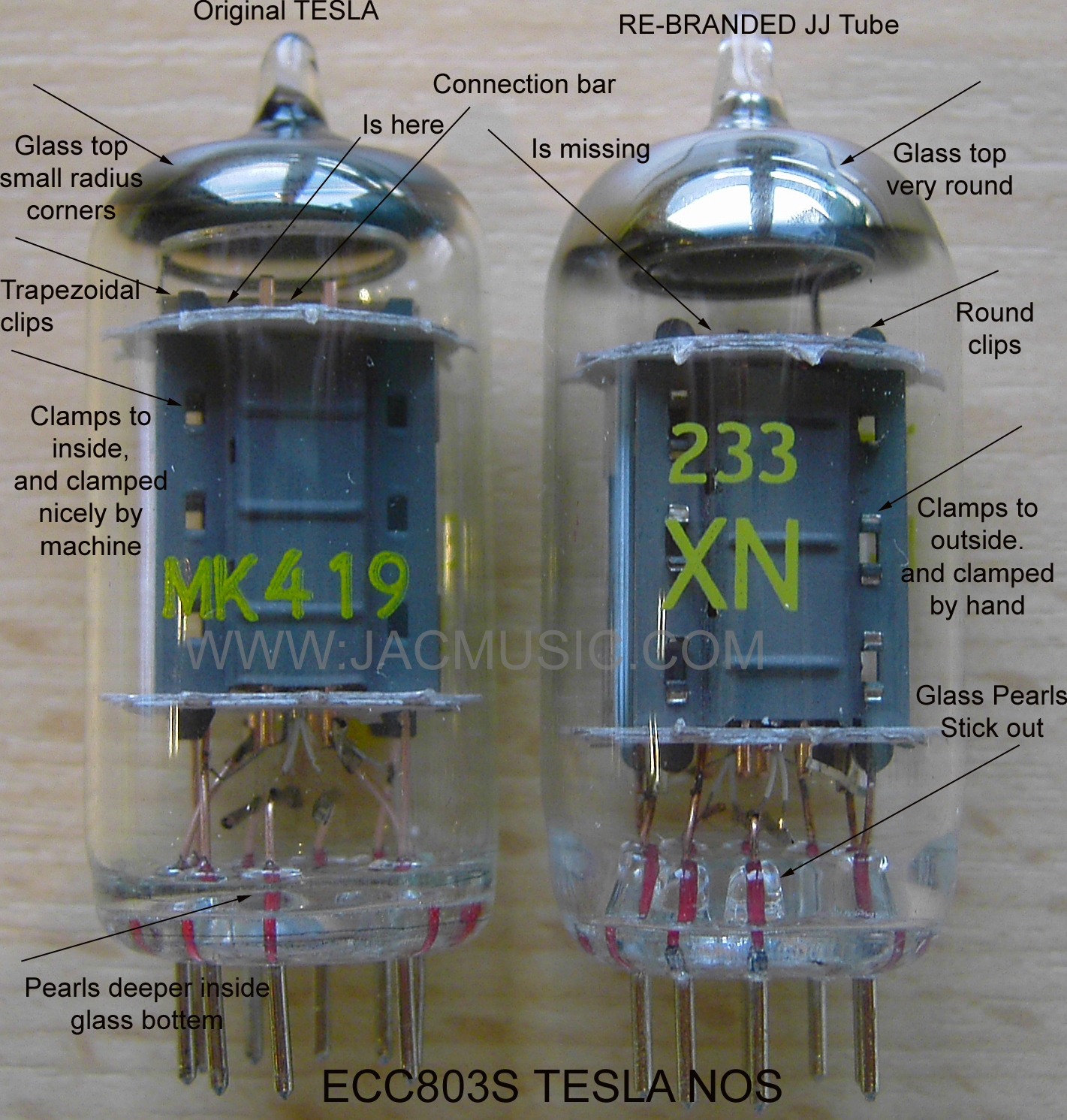 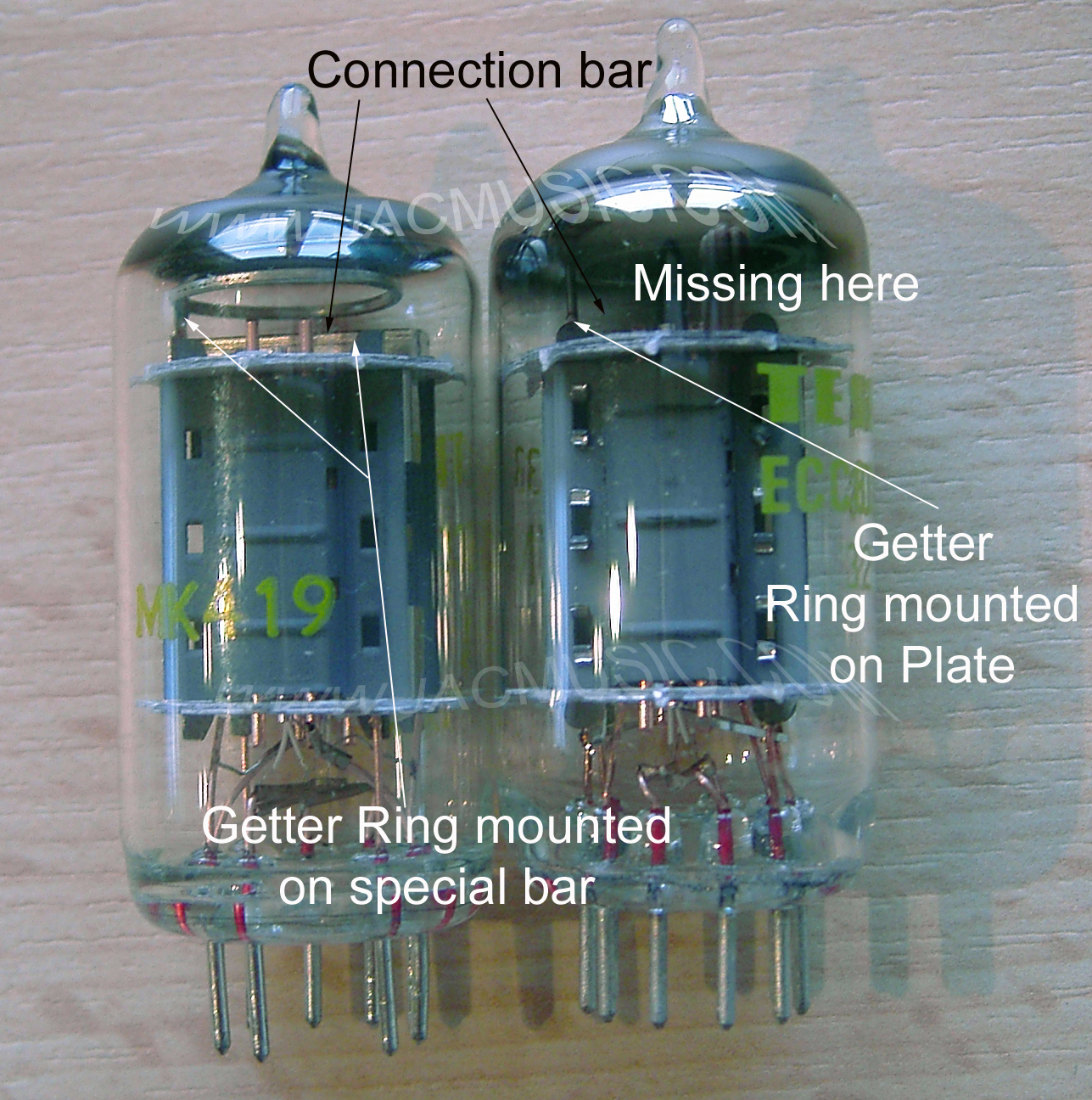 ProfRhino said:
and about the gold pins mentioned on that Tesla page - do they really make a difference ?
Click to expand...

I think they've been proven to increase sales. But if you're asking about sonic differences, then my answer is a clear "nope!"

perfect answer, exactly what I was hoping for !

I have indeed been wondering about the dual getter supports on some unbranded tubes, so these are Teslas - cool !
goes without saying the painted logo often is a crapshoot, but it can't be repeated frequently enough.

many thanks for your help, guess others will find this useful too in the future.
cheers,
Rhino

now to round it off, any info about the Tesla - RFT connection ?
both were socialist partner countries back then, so a collaboration is not unthinkable.
cheers,
Rhino

The Teslas that resemble RFTs have similar (or the same?) plates. The shape of the mica spacers is decidedly different and the shapes of the bottles are pretty different as well. Also, look at the difference in the getter support. 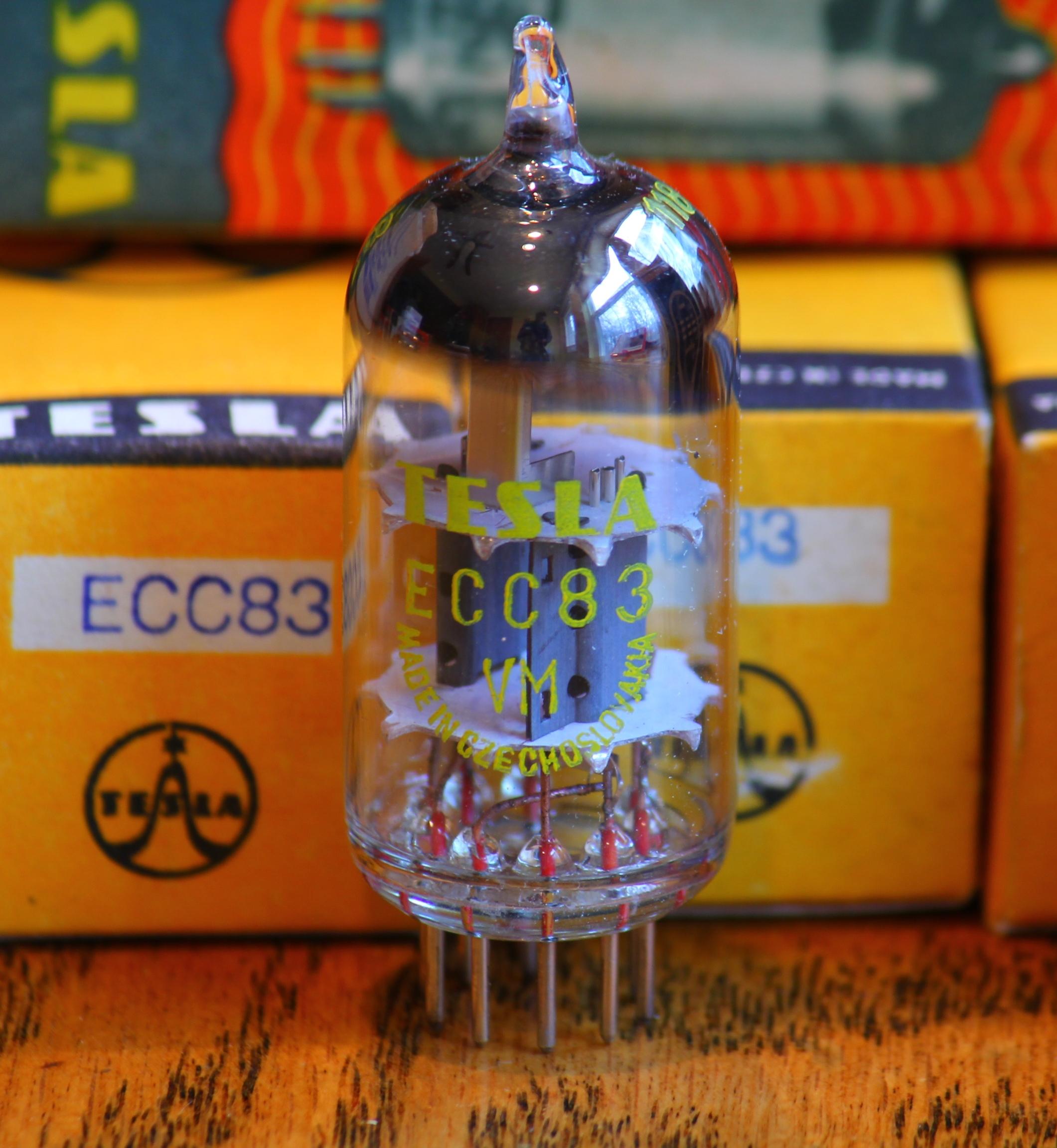 wow, ask and you shall receive !
thanks, Mike, for ruining my next Sunday - now I've got to dig out all my RFTs and doublecheck ...

The Teslas that resemble RFTs have similar (or the same?) plates. The shape of the mica spacers is decidedly different and the shapes of the bottles are pretty different as well. Also, look at the difference in the getter support.

great stuff, turns out (at least) two of my RFTs have actually been undercover Teslas all those years ...
nothing to worry about though, they don't really sound much different, solid rock tubes, 2203/4 material.