I've known and heard Albert for a long time but, never have bought anything for my music collection. Long story short, I saw the Setzer/Thorogood show in Chicago 2 weeks ago. Loved it. Youtube'd Thorogood live stuff this afternoon and found "Madison Blues" (one of my favs that GT covers) from 1984 at the Capital Theater with Albert Collins. I about fell off the couch - Albert was so good. Amazing tone, playing, and stage presence. I want to add some Albert Collins to my music collection.

Is there a quintessential album? Live album? Collection? Where should I go? 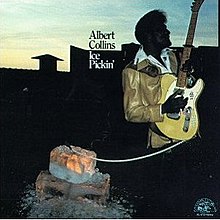 I also like Truckin', Don't Lose Your Cool, and Frostbite.

I like Frostbite (the final track where AC makes his guitar sound like all kinds of car noises is amazing) and Showdown! (with Robert Cray and Johnny Copeland). He has put out a lot of live albums over the years, many with fairly similar setlists. I think Live at Montreaux 1992 (a posthumous release) is a particularly good one.

Thanks guys - keep the recommendations coming!

You'll find music and videos on YouTube, PBS and Austin City Limits, plus smokin' sets live from Japan. Using his thumb and index finger as picks, plus a capo high on the neck, allowed for a sharp attack. He often used two Fender Showman amps facing each other with a mic in-between them. He often used a 150-foot cable, and would leave the stage while playing a lead and literally walk up into the crowd and all the way into the street (still playing the lead)...then come back to the stage. His band was tight, and included "Brother Reese" Wynans on the B-3. I've never seen another player able to duplicate his trifecta of tones, riffs and attack. He was a premium blend of Chicago/Texas electric blues.

The Imperial Recordings, early stuff, is really interesting, but after you get the later stuff.

the Ohne Filter DVD is great.

Thanks guys! Lots of good recommendations to check out! More are welcome too!

Any of his Alligator releases. " Too Many Dirty Dishes " is a standout track for me.
G

"Truckin' With" is absolutely essential and is the place to start. It's mostly instrumental, but the playing and tone are just frightening. It's also the best band he ever had.

That's a great suggestion! Love Robert Cray. I don't know much about Copeland. But, I'm sure he's awesome if he's playing with Albert and Robert.
W

IIRC this was my first blues album that wasn't Muddy Waters or Howlin Wolf.
J

Another vote to start with "Truckin'", aka "The Cool Sounds of Albert Collins". Then after you have that, buy almost everything else.