I liked this picture I took of my rig in the studio this weekend, so I figured I'd share and ask to see any pics you guys have of rigs you've used to record. 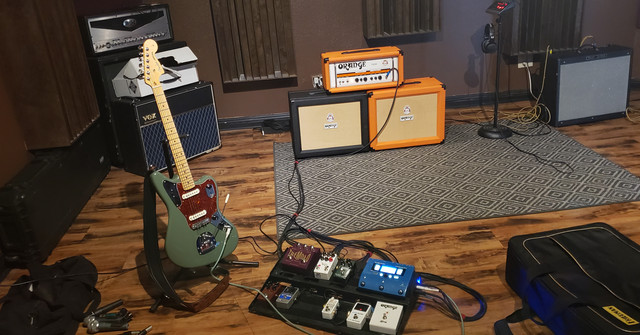 That can't be real... it's so tidy! Where are your piles of cables? There's not a single Coke can anywhere! 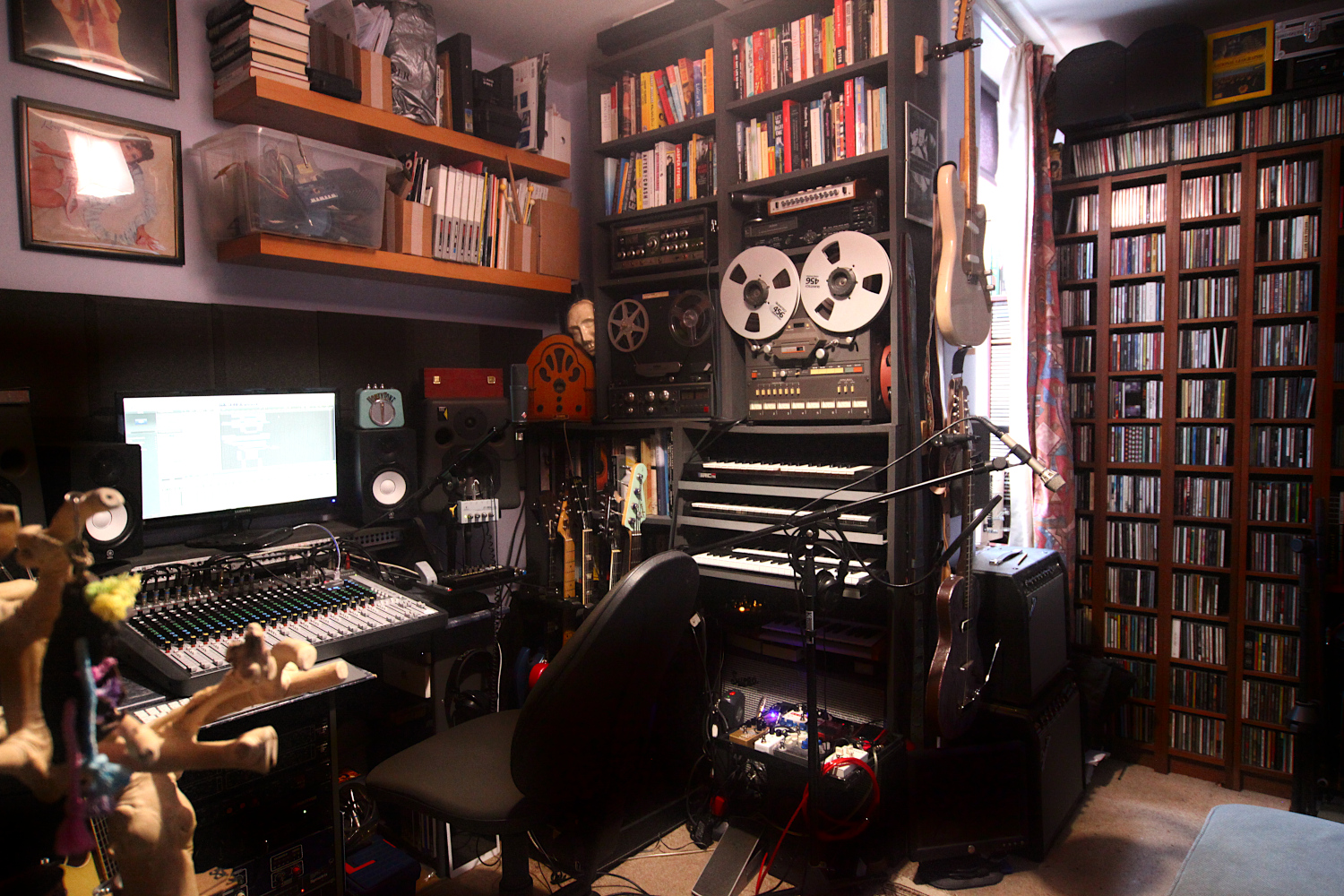 The desk is a Soundcraft thing with an integrated 22 channel audio interface so pretty much everything I record goes into the desk, then onto Logic on the Mac. The synths are all connected to the patchbay so any synth can be routed into Logic in about ten seconds. There's usually a Neumann permanently set up on a boom over the desk (can't see it in the photo come to think of it but it's usually there) so even if it's an acoustic idea I just swing it over and go I work fast and I concentrate on the idea, not the sound - often I records dozens of different ideas in an evening and delete 80%.

Once I like an idea, it gets gets fed through the tape machines, fed through all the analogue toys. I don't go mad with plug ins - I'd much rather route a signal out to a grungy old spring reverb. That's the beauty of the big desk, it's so easy to route things back into the analogue world. Guitars that were originally just the pedal board into the desk typically get re-amped through various small valve amps.

And yes, that's a cockatoo in the corner. She isn't strictly speaking part of the process but she likes being involved.

That home studio looks awesome Jayyj! I'm jealous. Unfortunately the room isn't mine, the bass player of my band owns the studio though, and we paid for his space and time to record a couple tracks this weekend. If it were mine there would absolutely be way more cables lazily strewn about the room, along with the beer bottles and cans.

In regards to cable messes though, one of the best things I ever did was velcro all my cables that run from the pedal board to the amp together, color coded so I don't have to think about which one goes where.

Ive had a home studio steadily since around 1984, and what Ive learned about sound and guitar making in my various studios has been absolutely, 100% indispensable. I'd probably be building-by-numbers if I hadn't learned about sound in that particular way (since I am in the business of building sounds).

Of course, I use it for recording my music as well. Here's my current TCM control room, built with the help/advice of Wes Lachot (google him)
And a few guitar amp shots from those parts of the TCM studio. 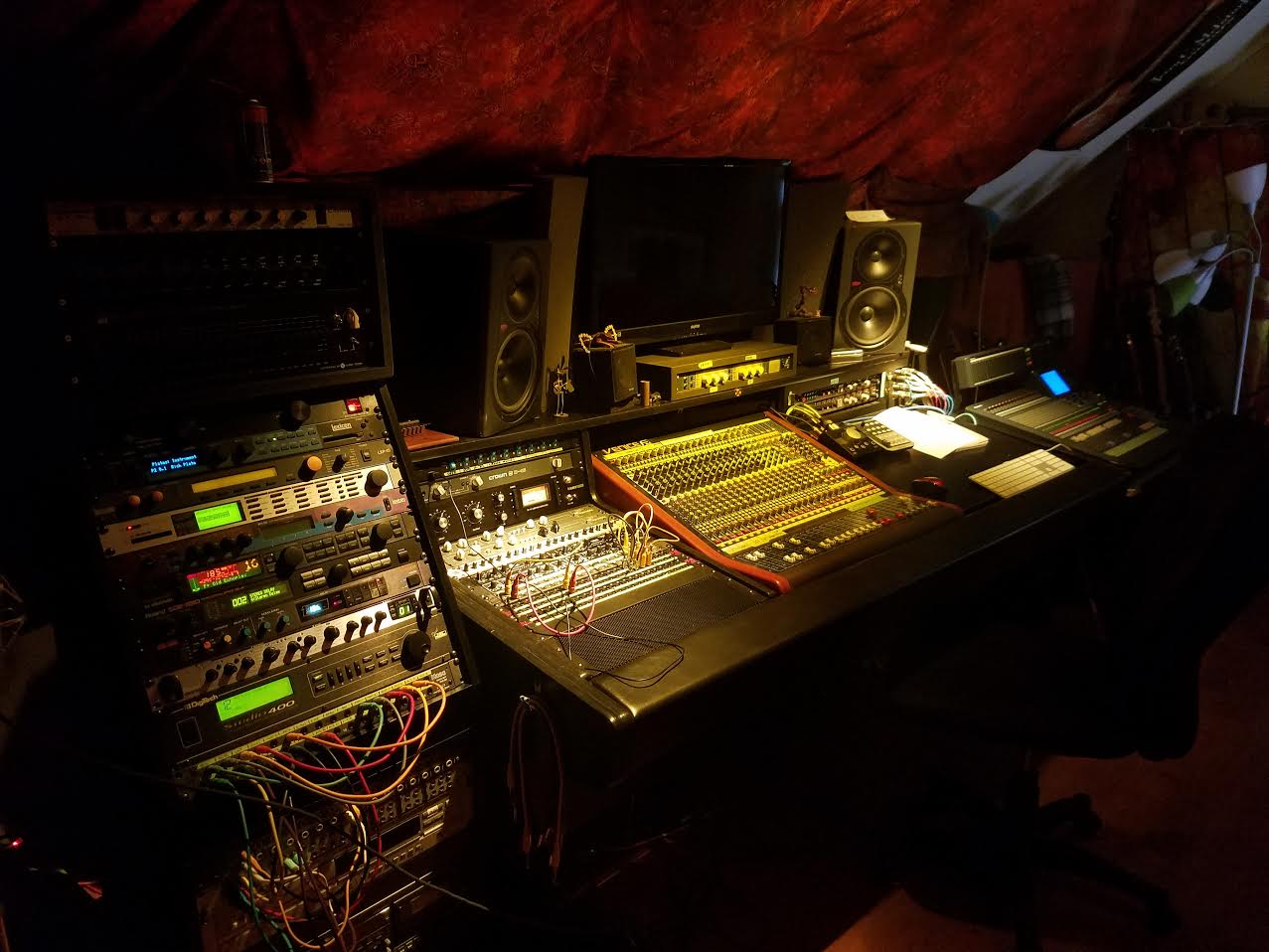 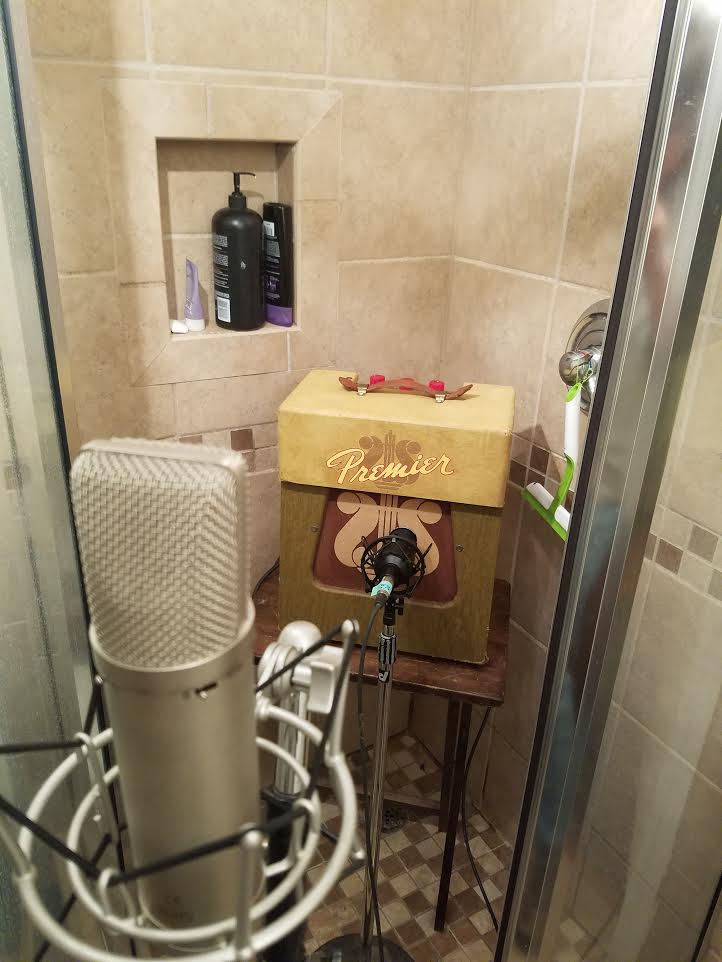 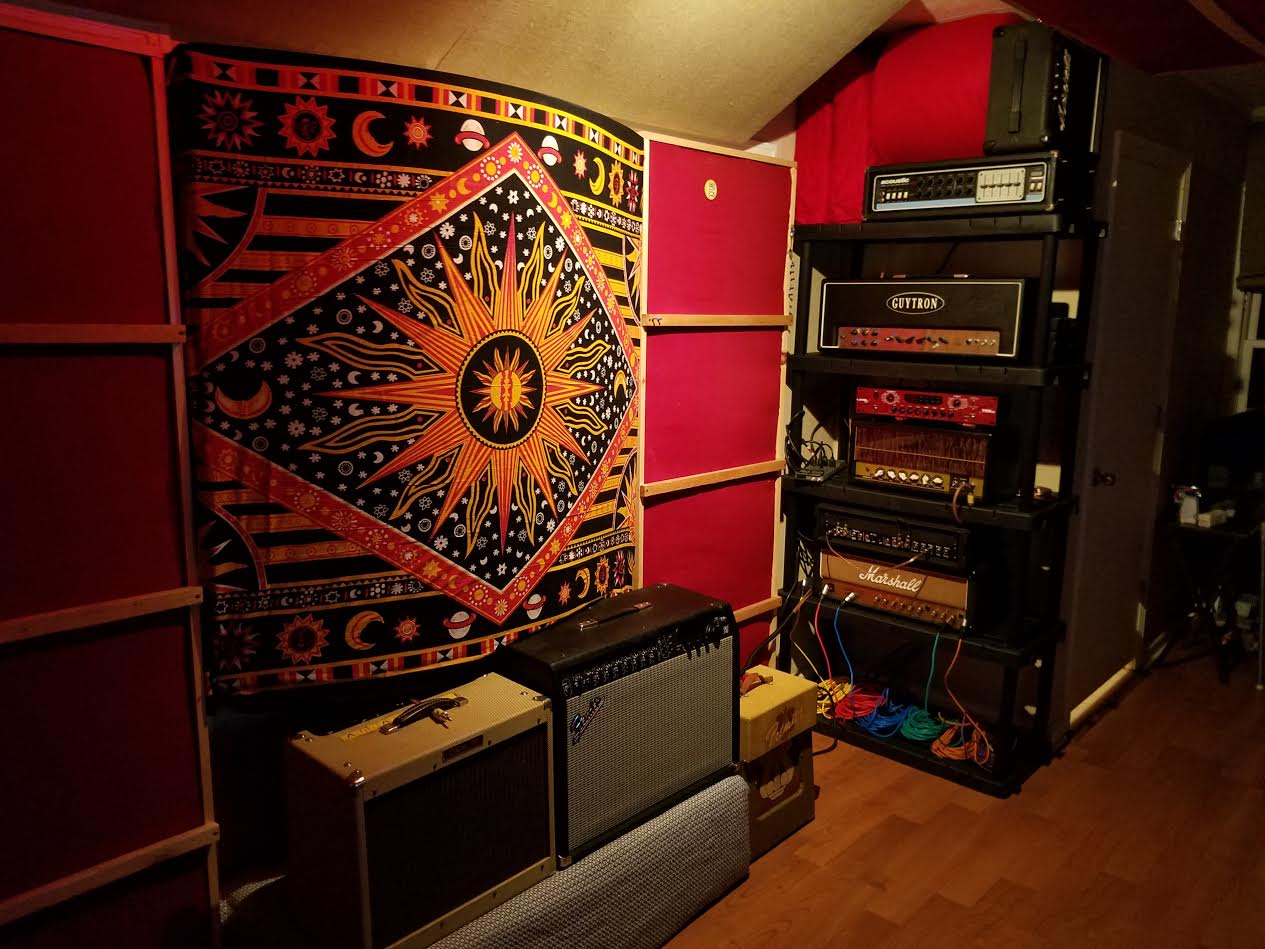 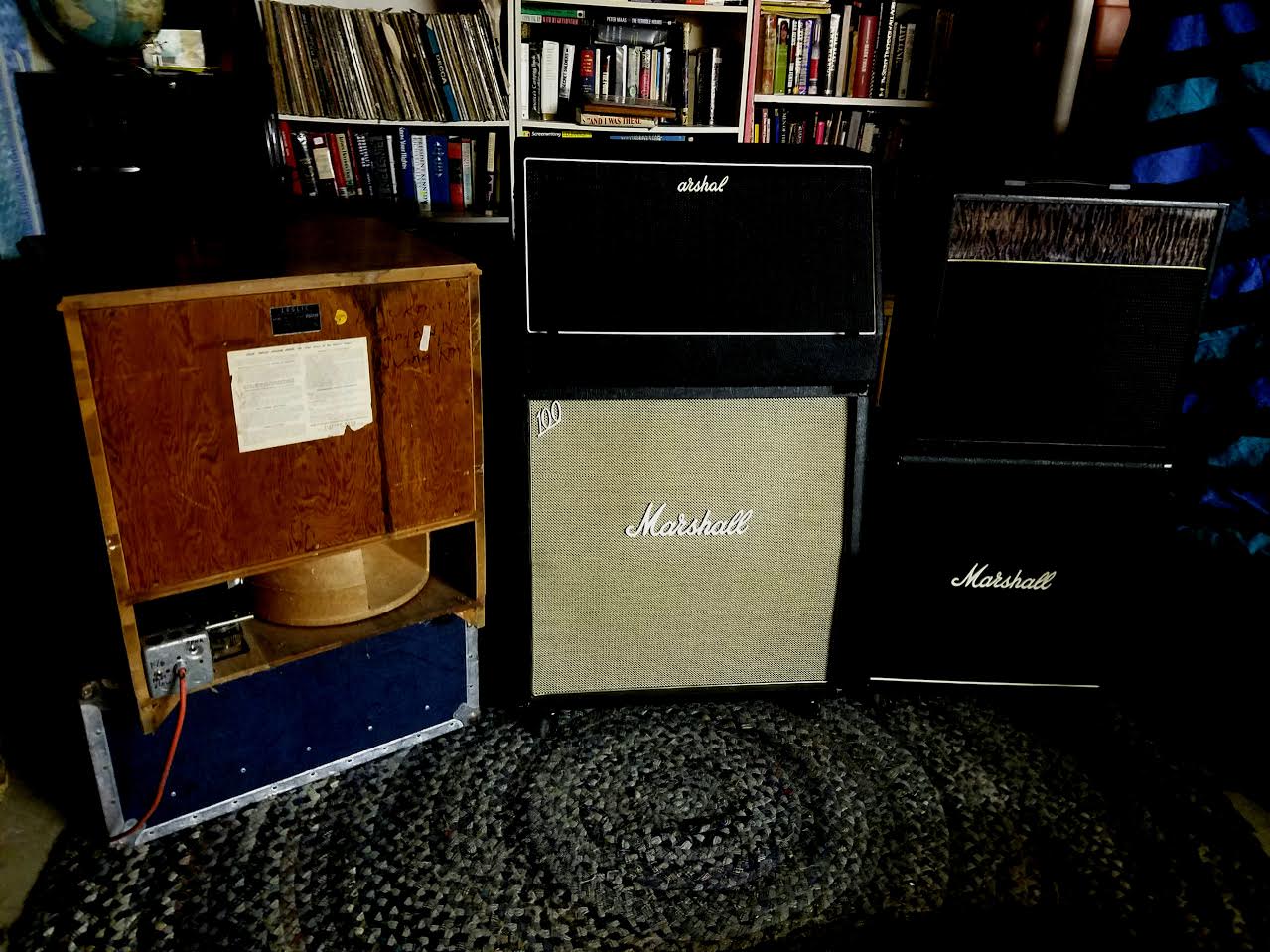 sharing this for perspective....I built a studio in my basement in ‘99, recorded in it for 10 yrs. still got all the gear gathering dust.
now my setup is like the guy in this video...


BTW - he was on Pensado’s Place as well and it’s a very interesting discussion about recording today:

Wow. I can’t believe the setups some of you have. Jealous beyond words.

I go straight into a Lexicon Alpha using SGear docked with GarageBand the majority of the time. Sometimes a Yeti USB mic when I record acoustic. That’s all.

For the record, I meant this thread to be about guitar rigs for recording. But, I am just as if not more interested in these bad ass home recording set ups you guys have!

DiAmoroso said:
For the record, I meant this thread to be about guitar rigs for recording. But, I am just as if not more interested in these bad ass home recording set ups you guys have!
Click to expand...

Looks like you have a Symetrix 501 compressor. That's a good spice-piece, I currently have a pair of them (heavily relied on them in the 1980's) and the legend of the ones with the Valley People VCA is true IME. But in any configuration/model they are cool. If you haven't already, look into overdriving the limiter a tad on bass guitar. It's also a great personality-piece (as appropriate) when tracking electric guitar (4:1 and adjust the rest to taste, paying attention to how the 220Hz window is behaving). It's also good as the front-end of a vocal chain, or a guitar chain, or ?? chain, in which the 501's limiter just snips-off the transients, fed into a DBX 160X which does it's thing. It is a certain sound.
Last edited: Aug 21, 2019

DiAmoroso said:
For the record, I meant this thread to be about guitar rigs for recording. But, I am just as if not more interested in these bad ass home recording set ups you guys have!
Click to expand...

This was the setup at Big Blue North late last year for the Planets of Grace EP... that's my Orange & some other assorted goods. The JC120 just slightly outta the picture with a pair of Beyer 160's was pretty much "the" amp & studios gear. Not pictured is an early 70s Marshall 50 watt small box & checker 4x12 that we setup and never used.