So annoyed at the price hike on Danocasters

Shark21 said:
There are some really weird assumptions in this thread about how business is conducted and how markets work. A person that's "mad" about "greed" in a simple supply and demand correction due to market forces (no ongoing supply) should remember that how someone feels about owning a Danocaster is just the reason the price will increase dramatically or not. Carping about someone else's windfall or, conversely, a decline in value really has no effect on the market itself.

C'mon, guys. "Not good ethics" at L.A. Vintage? Please. I bought this Danocaster from L.A. Vintage for a premium of about $450 over what Dan was charging at the time. It never once crossed my mind that I was being ripped off. I, actually, remember having a great conversation with Clif about how him having Danos readily available (him making the investment) was great. And the idea that Dan should enjoy the increase in guitars sold by L.A. Vintage only stands to reason if he should get some of the increase in value every owner enjoys that sells in the future. 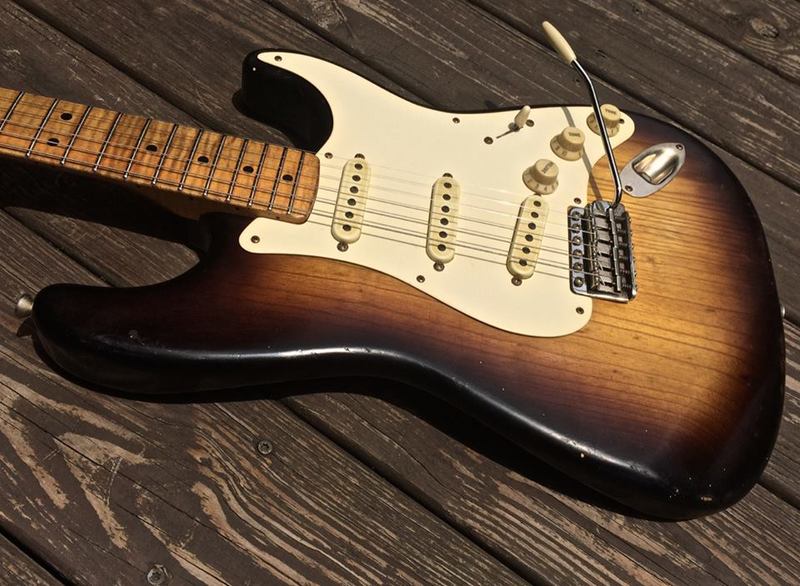 The $450 markup for skipping the long wait list is fine. Marking a guitar up at that price point to $6000 is for sure greedy no matter how you slice it. You can disagree, but you will be wrong. Not trying to be a jerk, but there is really no way around that.

When vintage guitars skyrocketed in price in the '80's-90's and folks sold them for huge profits was that considered greedy? What's the difference?
B

There's a couple of waaaaay overpriced Danos in the emporium right now. They haven't sold yet.... I wonder why?

clint said:
When vintage guitars skyrocketed in price in the '80's-90's and folks sold them for huge profits was that considered greedy? What's the difference?
Click to expand...

The market dictated the increasing prices for vintage guitars. The first Danocaster price hike was largely started initially by a member on here buying up every used one available and then listing them at a premium. He created the scarcity that he then profited off of.

The post retirement announcement price hike was largely started because one person listed his guitar for $20,000. If the market had dictated the price hike, then I wouldn't say it was greedy. But the guy has basically admitted on here that he is just fishing for the highest price he can possibly get. To me, that's greedy. Remarkably, other people followed suit and all of a sudden the "price" for a used Danocaster averaged above $5,000. Almost all of those guitars are still available, and the price on almost all of them has gone down considerably. The people who haven't reduced their prices clearly don't actually want to sell them...they're also just fishing to see if they can get way above market price for their guitar.

Another difference between now and then is that a vintage guitar in the 80s and 90s was fairly unique spec-wise. Fender and Gibson were just getting into the vintage replica market and for the most part vintage guitars were comparable in price to new guitars. Furthermore, the quality of new guitars had deteriorated quite a bit up into the 80s. Vintage guitars were simply higher quality at that point.

Now there are plenty of quality options for vintage-style replica guitars. While almost universally considered good guitars, Danocasters are not really unique. Yes, you can argue that Dan's unique relic process is a standout feature, but for the most part there are other options that are comparable. I've played Suhr, Fender, K-Line, and LSL and there have been some really nice guitars made by all of them, all of which are available for under $3,000 brand new. There are many other makers that I haven't played that also get good reviews.

Well said ^ but regarding the current price, 3 of the 6 listed on LA Vintage's website have sold at or above $6,000 so there appears to be at least a small market at that price. $20K is nuts though.
BTW I remember getting rather "annoyed" when I could have bought a great '59 ES 335 for $5K in the '90's but I had to get over it.

cosmic_ape said:
I still cry myself to sleep thinking about it. I got on the Thorn train so late, I guess I should be happy I got at least one.
Click to expand...

SuperSilverHaze said:
The $450 markup for skipping the long wait list is fine. Marking a guitar up at that price point to $6000 is for sure greedy no matter how you slice it. You can disagree, but you will be wrong. Not trying to be a jerk, but there is really no way around that.
Click to expand...

Sure there is. My opinion. And the arbiter of what's right or wrong doesn't post on this forum.

clint said:
When vintage guitars skyrocketed in price in the '80's-90's and folks sold them for huge profits was that considered greedy? What's the difference?
Click to expand...

Now, thanks to this thread, I'm ashamed to tell anyone how much my Nextel stock appreciated before I sold it.

I personally think paying double or more for a Danocaster than what Dan himself sold his guitars for is ridiculous and more about ego(look what I got) than just wanting a good guitar to play.

I owned 3 Danocaster’s, one very briefly due to some sort of mishap during shipping which Dan took care of immediately. Dan, seriously had/has the best customer service I’ve experienced.

That said, of the two I had the longest I sold and I have no regrets. In all honesty, a $700 locally made parts Tele sounded and played better than the two Danocaster T-Styles I had. One was a 2009 and the other a 2015. I’ve seen the 2009 I sold here on Reverb for double what I sold it for and I promise that outside of a fantastic looking guitar, it just wasn’t all that. None of my guitar playing friends who played it were all too impressed either. The 2015 was much better but again, not as good as my $700 parts Tele. Note that the finish work on the Danocaster’s killed the sad relic job on said parts Tele. Dan’s finish work is simply the best.

Anyway people can ask for and pay what they want but there are a million fantastic guitars out there for way less money. I don’t regret having sold my Danocaster’s before all this hype. I would not feel comfortable asking thousands more for something than I paid for it and don’t think is worth it. Integrity I guess.

Gold Supporting Member
I truly appreciate the finish work on the Danocaster guitars. I have admired how he did the back of the necks in a realistic way---like a real vintage guitar that has been played. Unlike Nash, Fender Custom Shop and many others that just belt sand off the finish on the neck. Yuck. Well played vintage guitars never look like that. If that isn't bad enough, they match the major finish loss with a bone dry, new looking piece of rosewood on the fretboard and top it all off with rusted hardware. Dan always had the expertise to make the guitar look aged correctly across the build.

If you are looking for an option, look at Protocaster. I just bought one used on TGP classifieds. These are not parts guitars---Mike Potvin cuts all the woods. Josh Groves does all the real old school nitro finishes, expert aging if desired, great attention to detail.

I own a lot of nice guitars, but I could not be more impressed with mine. And they are a bargain compared to a Dano or almost anything else comparable. I had a good first experience at LA VINTAGE getting a pedal at a great
Price new. They hooked it up. They have amazing guitars in shop. The dano price hike is a questionable move though, but honestly, I question anyone who pays that price for a dano. They’re nice but imo not $6k

My protocaster ‘59 Tee Type felt like an old friend from the jump. You can see the ash through the finish, clay dots, and the best neck I’ve played to date 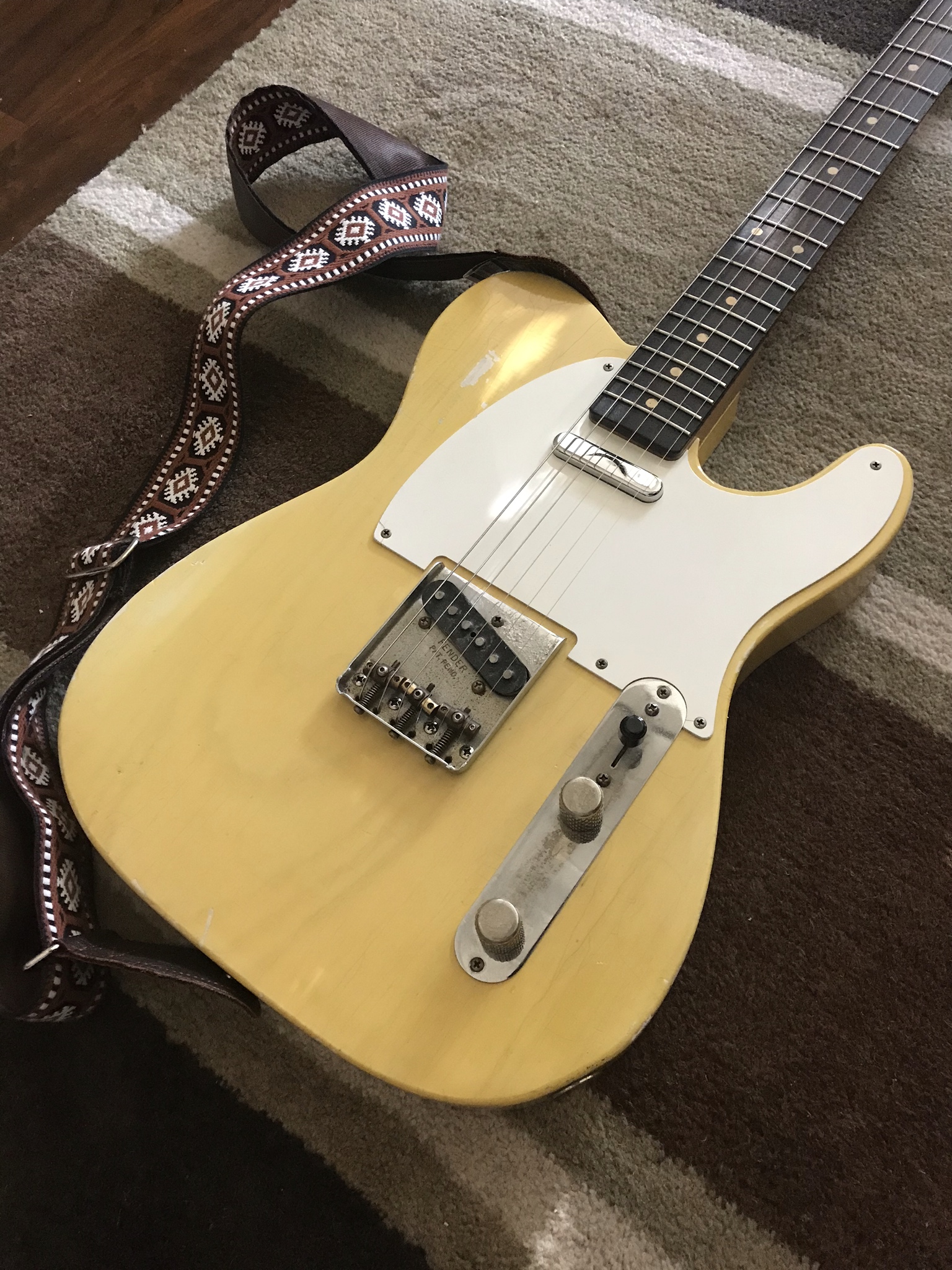 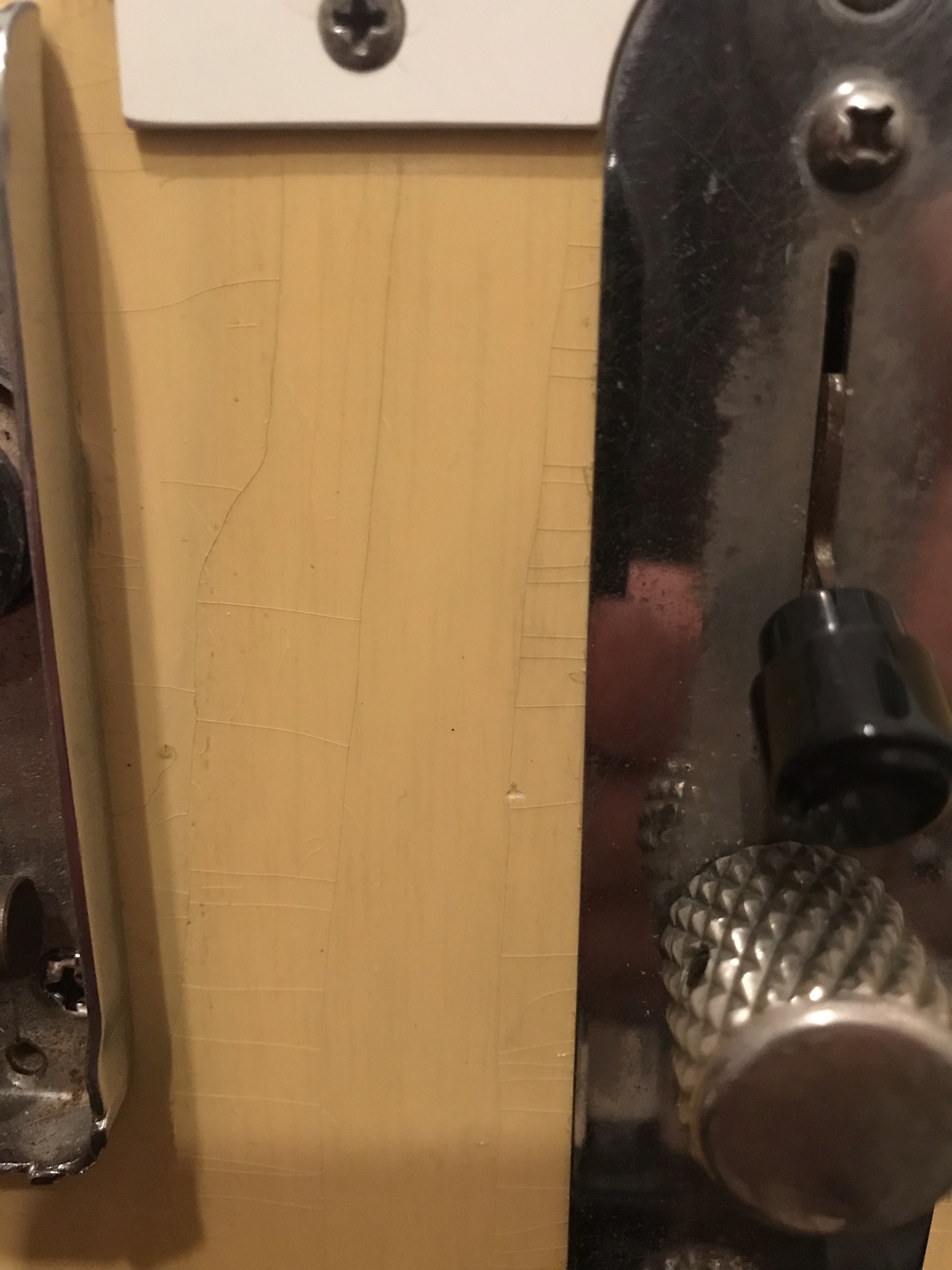 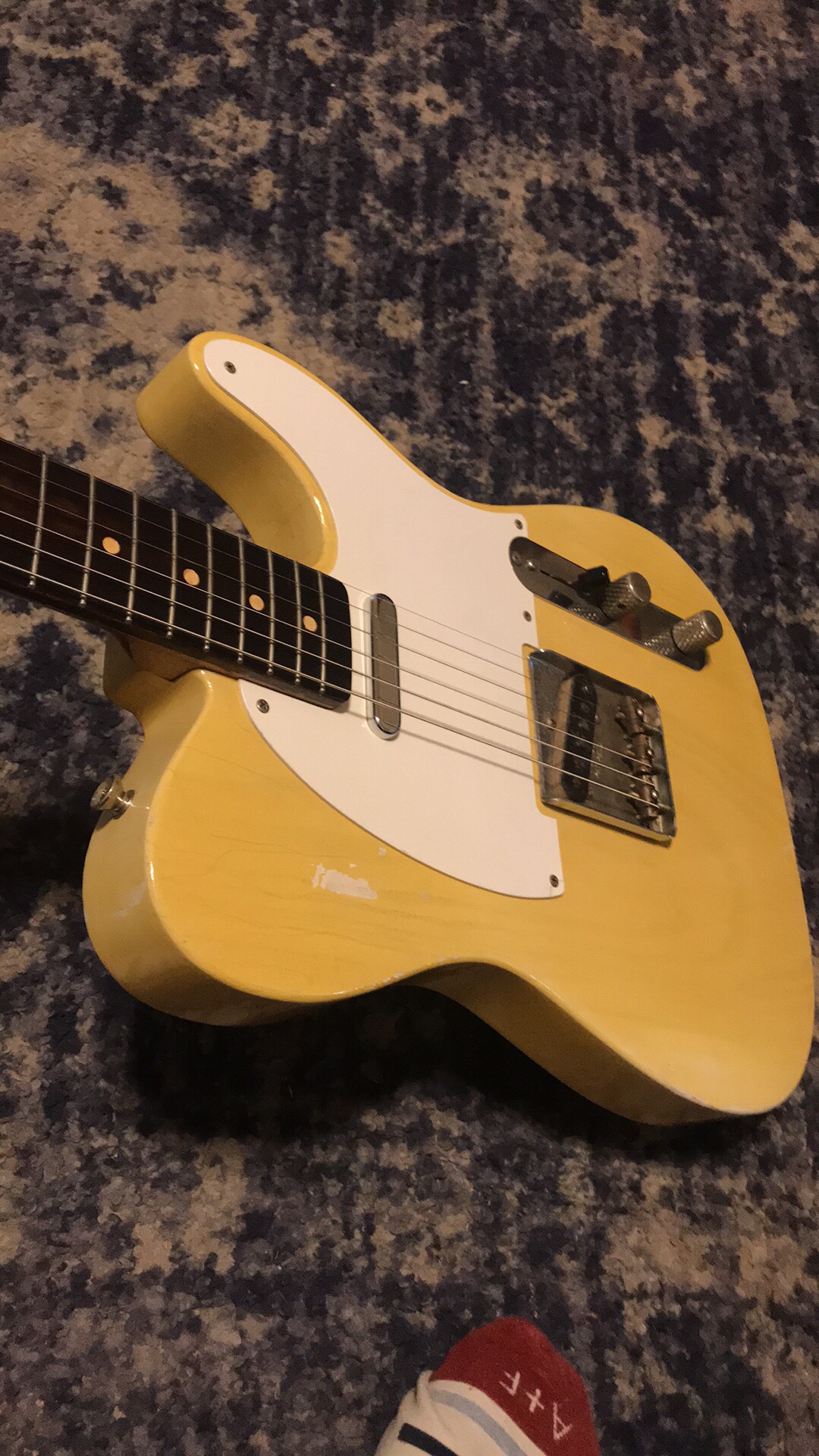 SuperSilverHaze said:
The $450 markup for skipping the long wait list is fine. Marking a guitar up at that price point to $6000 is for sure greedy no matter how you slice it. You can disagree, but you will be wrong. Not trying to be a jerk, but there is really no way around that.
Click to expand...

So, you don't believe in the law of supply and demand?

Gold Supporting Member
I don't get the bitching, either. The people complaining need to honestly ask themselves...if they own something that the market suddenly deems is more valuable for whatever reason (death of artist, company folds, famous person plays it, etc) and they were looking to sell it, would they sell it for the old value or new?

fretnot said:
I don't get the bitching, either. The people complaining need to honestly ask themselves...if they own something that the market suddenly deems is more valuable for whatever reason (death of artist, company folds, famous person plays it, etc) and they were looking to sell it, would they sell it for the old value or new?
Click to expand...

John D'Angelico only made so many archtop guitars during his life.

Today, a DA New Yorker in good condition will fetch somewhere around $40-$50k. I don't think John was charging quite that much back then.

I think the problem is the shop owner hounded someone on reverb not so long ago for charging a high price for a dano then turns around and does the same thing. At the end of the day the market sets the price. If no one shells the cash the price will go down

Why do you hate freedom?[/QUOTE]


Oh, dont get me wrong. I support it in the case of guitars and luxury goods (not necessities like life supporting drugs for example) but it doesn't mean that I'm not going to speak my opinion on the issue. I support la vintages right to choose how they sell their gear, but I'm also going to call them out for a ridiculous mark up too. As a business they can decide if potentially selling these guitars at such a high cost is worth any damages they may receive on their image as a company. For me personally and for others I have no interest in checking out any of their other products they carry based on the fact that they seem more interested in themselves than their customers. For others it doesn't matter, and that's fine.
Last edited: Aug 21, 2019

Silver Supporting Member
Again, what is "ridiculous" about supply and demand? Apparently, the guitars are selling at higher than usual. And Clif's a greedy bastard because he's smart enough to maximize his profit.