Came home from work yesterday to be greeted by this: 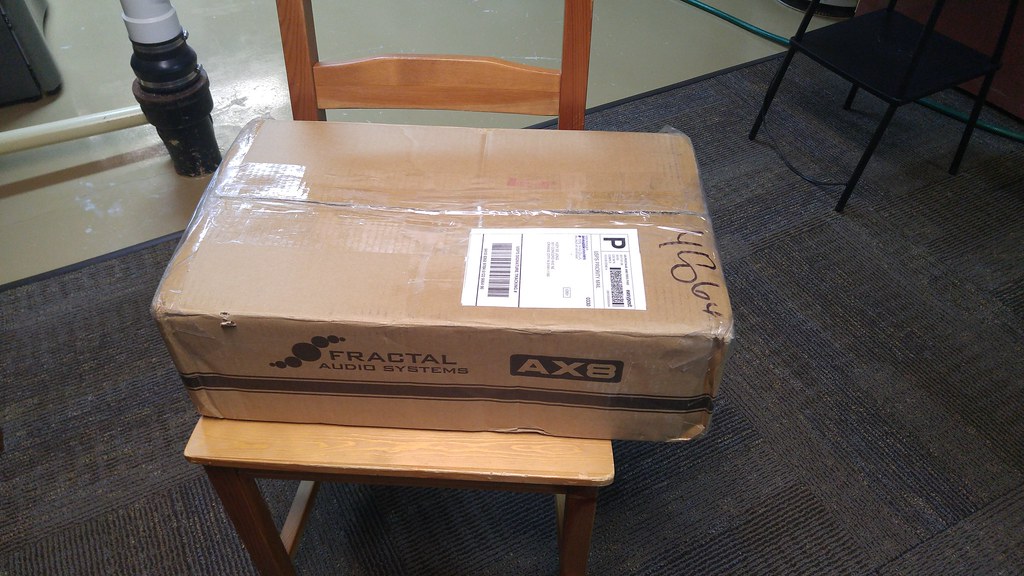 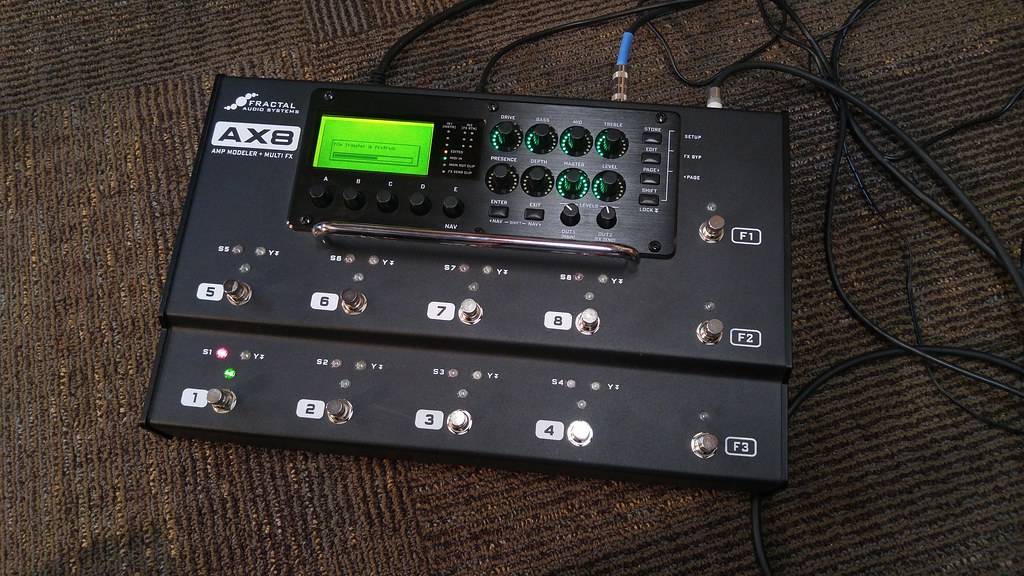 Pretty excited about trying the AX8 out, so I wanted to share some first impressions. Probably won't be anything particularly new or enlightening for most, but here are my thoughts anyways.

For the sake of context let's start with where I am coming from. I've been using modelers heavily for a while now. HD500, 11R, Zoom G3, etc... I used an Axe-Fx II mk. I for a few years. Most recently I ran a pedalboard built around an Atomic Amplifire. I also have a number of tube amps that I built myself and use mostly for fun in my basement. But for most practicing, recording, and live playing I use modelers.

- The unit was smaller than I expected. I really loved this. Not including an attached expression pedal is awesome IMO. Gives me the option to buy one if I want it, or not if I don't.

- The tones REALLY impressed me straight away. I probably spent 20 minutes noodling on the first stock Twin preset. I was mostly trying to get used to the footswitches, but ended up loving the tones too. I spent a lot of time comparing the Amplifire to the Axe-Fx II I had a while back. I'm sure there is some element of confirmation bias or wallet bias or whatever. But the AX8 sounded awesome. So did the Amplifire.

- Firmware updates really add up over time. When I owned the II and was updating firmware immediately upon release, I don't know if I noticed all of the improvements being made. Many are subtle. But having missed a year's worth of firmware updates I definitely noticed a number of things that were 'better' than my memory. The feel of the pick attack. Having some new drive models or delay models. Updated IRs.

- Returning to the grid layout is AWESOME in the AX8. I am completely over the moon with how this thing does switching and control over effects, scenes, x / y, and presets. Coming from individual stomp boxes and the Amplifire, and before that with the II, I used a FCB1010 midi controller - the control you have with those 11 switches on a relatively compact board is really impressive. The amount of ground you can cover in one preset is incredible.

- The amp block as a whole is incredible. Having 200+ amp models is one thing - but to have each of them sound great and be very accurate to the original is impressive. And in the last year my time spent building my own tube amps, learning about circuits, and digging into the inner workings of my favorite amps - it gives me a whole new appreciation for the depth of the AX8's amp block. For example, I built a 5E3 and experimented with putting a blackface tone stack into the amp. Took me about a week. On the Axe you can do that in a few button presses. And in the real amp there is usually tradeoffs with potentially added noise or having more potential failure points.

One thing I will add is that some of the parameters are a little 'safe'. Meaning in a real amp if you crank up the B+ or something like that, at some point it explodes. Or if you set the bias really far off it completely ruins the amp. In the Axe some of these changes are more subtle and safe compared to the real world. Not necessarily a criticism. It probably doesn't really make much sense to be capable of tweaking a digital amp to the point of not functioning. Just that the 'realism' is checked to some extent.

- Some thoughts comparing the Axe-Fx II to the AX8. The physical form factor the AX8 is so much better for me. I LOVE not having to haul the rack and pedalboard around. Some tradeoffs though. The biggest is only a single reverb block. Stacking multiple reverbs together in an ambient context is a trick I use pretty frequently. The single amp block will also be a limitation in some instances. I hit the CPU cap and have resorted to only using normal res reverbs. I have to dial it back just a little with my desire to get EVERY TOAN POSSIBLE on one preset.

- The on board UI is a miss with me. The location of some buttons is kind of non-intuitive. The way the different knobs work to scroll around through stuff is kinda wonky IMO. I haven't spent a lot of time with it yet. I pretty much threw in the towel for learning and just used the PC editor - which works wonderfully. I think I will simply have to spend some time learning how it works. Probably true for lots of things related to Fractal. But the payoff is there...

Great first impressions, and congrats! I think we will have to start a new AX8 club here.

I'll be interested to hear your thoughts on the amps after spending a couple weeks given your amp building experience. Interesting to hear from that perspective.

Welcome to the club!

Jarick said:
Great first impressions, and congrats! I think we will have to start a new AX8 club here.

I'll be interested to hear your thoughts on the amps after spending a couple weeks given your amp building experience. Interesting to hear from that perspective.

A thought I have in general about Cliff is that I appreciate his commitment to accuracy. Many other modelers will get you into that general ballpark. The Plexi will be plexi-ish. But the Axe really seeks to capture the nuances and the details of each circuit. They don't just have a Plexi amp model - but they have the bright, normal, or jumpered inputs. The impact of the bright cap / switch. Each has its own feel. I personally believe tube amps have a certain charm to them. A tangible, physical charm. The Axe does the best job of any the modelers I have tried at providing that kind of charm.

Second, I get excited by the prospect of doing things in the amp block that are either really hard to do in real life or physically impossible. For example, think about the difference between a Bandmaster Reverb and a Super Reverb. It mostly comes down to the transformer size. Well, swapping a transformer is not really an easy thing to do. They're the single most expensive individual component. They're heavy. They have lots of wires and connections to manage and install properly. But in the Axe's amp block you have all those parameters available on a dial. I remember a post by Tyler Grund where he recreated an SRV signal chain. Those kinds of mods to Stevie's amps were very impactful and you can recreate that with a ton of detail in the Axe.

Another example. I built a 5E3 and heavily modified one of the channels. I learned a ton about give and take in an amp. 5E3's are known for being kinda dark and bass heavy - especially with modern humbuckers. So my thought was - let's just add a bass control. Well, whenever you add a passive control like that you end up cutting the overall signal quite heavily due to a high insertion loss provided by a 3 band EQ circuit. There is this tension between the purity of the simple stock tweed circuit and some desire for greater control and flexibility. You can't necessarily have it all. But in the digital world you don't have those limitations. The Axe's 5E3 has a bass control that doesn't affect insertion loss. It has an EQ built into the amp. It has a compression circuit built into the amp.

So for me, the dedication to component modeling has a lot of payoff.

Get ready as the new Quantum 7.00 is just around the corner for the AX8, that will be your first major update.

Oh hey, I didn't even read who had posted it. I spent a fair amount of time watching your comparison videos between the Amplifire and Fractal units, so thank you for that! I preferred the sound of the Fractal in those as it seemed to have a little more dynamics and a more pleasing sound overall.

The "under the hood" stuff is a really nice touch with the Fractal modeling. I was very worried it would lead to "death by tweaking" for me but it's been the opposite, as I can make changes that I wouldn't be able to make otherwise to get the sound in my head. Of course, having more amps to begin with means I can often find a better starting point too.

kleydj13 said:
The on board UI is a miss with me. The location of some buttons is kind of non-intuitive. The way the different knobs work to scroll around through stuff is kinda wonky IMO. I haven't spent a lot of time with it yet. I pretty much threw in the towel for learning and just used the PC editor - which works wonderfully. I think I will simply have to spend some time learning how it works. Probably true for lots of things related to Fractal. But the payoff is there...
Click to expand...

Sums up my own observations as well... Tones were certainly there... onboard UI big thumbs down... they could have done better there for sure. I expect the next hardware revision will address the UI. It's certainly usable, but not a pleasure (it needs a little less Linux and a little more Mac to use an IT analogy.) I personally found X/Y switching outside of scenes to be near useless, the way that the switches worked on the upstroke was most dreadful, X/Y mode had to go. The Display is difficult to read standing even after Lasik surgery... and the minimal visual feed back ultimately drove me away from the AX8. But it always sounded great.

The PC editor is good. If the unit suits your workflow... more power to you... enjoy. You'll sound great FOH and recorded or even at home entertaining the dogs or cats or whatever.

nicolasrivera said:
Get ready as the new Quantum 7.00 is just around the corner for the AX8, that will be your first major update.
Click to expand...

Another reflection I have about my time with my II was how effective new firmware is as an anti-GAS remedy. Excited to have that back.