Someone needs to invent a modelling unit that runs VST plugins

I was doing articles on how to make as wireless as possible laptop or tablet for the stage.

One of the biggest concerns was to really limit the number of cables and setup needed.

A big part of it was the wireless, battery powered Behringer FCB1010 to control it - https://pipelineaudio.net/wireless-battery-powered-behringer-fcb-1010/

Using REAPER as the master controller by running SWS Live Configs, or even better, LBX Stripper

Bringing the Studio to the Stage! for guitarists

You may have noticed a theme, (that I myself didn’t notice till various manufacturers and friends at NAMM 2018 pointed it out to me) unifying my posts on social media, various forums and even… 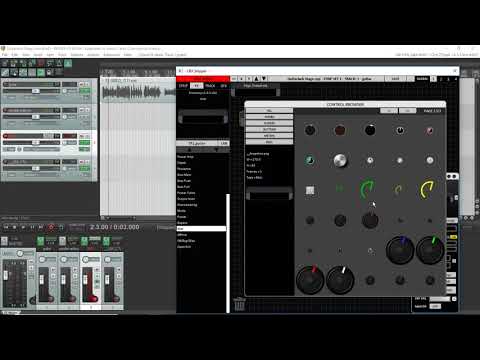 How to set up GuitarJack Stage for four presets, auto engage wah and a spillover delay inside of REAPER using LBX Stripper, using free plugins. Another installment of Bringing the Studio to the Sta…

As an alternative and standalone, Gig Performer is AWESOME!!!

People mention mainstage, but one of the big advantages to Gigperformer or LBX stripper or SWS Live is that if you talk crap about these, the developers will be on soon to help you. Also, cross platform, unlike mainstage, at least the last time I looked

There are a ton of electronic instruments that are functionally small computers running Linux - the current MPC series is probably the most widely used.

The biggest obstacle (after finding a powerful enough CPU) to a guitar modeler running plugins is the relative paucity of plugins designed to run on Linux.

mvsr990 said:
The biggest obstacle (after finding a powerful enough CPU) to a guitar modeler running plugins is the relative paucity of plugins designed to run on Linux.
Click to expand...

And therein lies the issue - realistically you aren't going to get the major plugin developers to natively support Linux, so what you are really looking at is a barebones Windows 10/11 setup.

What is really required here is a new plugin format that is completely independent of both OS and CPU architecture, which would presumably need a "JIT" translation layer to native code (think something like Rosetta 2 on OS/X), which hopefully would provide sufficient performance and compatibility that it would be a no-brainer for plugin developers to adopt.

pipelineaudio said:
Elk OS is already doing this. We've been developing during time off with it. I wan't my VST's in a pedal and thanks to Elk, its all doable
Click to expand...

This is really exciting. I've been seeking stuff like that over the years. Could you possibly start a thread for that with an introductory overview? (Esp. the Pi platform.)

It occurs to me that part of the problem here is that none of these platforms gain traction because there is a limited audience willing to go so deep with such a learning curve, and they would be spread too thin trying them all out to rally around any particular fore-runners.

It's not like tons of people who have tried out a variety of fuzz pedals and are ready to pass on their recommendations. If you are busy plugging away at building patches on a Zoia, you probably have your hands too full to also be working on Arduino and Muse Receptor projects.