The One True King

cbm said:
At least a Sputnik, Wow, and Gemini III
Click to expand...

Nice! I almost grabbed a modded Wow today but somebody beat me to it.

shikawkee said:
Nice! I almost grabbed a modded Wow today but somebody beat me to it.
Click to expand...

The Wow was one of my least favorite based on my previous go at them. The Gemini III was my favorite.

The key to the Wow is turning the LFO waaayy down to off.

Boosting it is good too.

And don't forget the toggle inside the pedal.

So the BA Tri Dirty Booster is forcing me to confront the fact that I might like Muffs after all...

It is HUGE sounding.

(Still early innings but it is a lot of fun...)

Flatscan said:
So the BA Tri Dirty Booster is forcing me to confront the fact that I might like Muffs after all...

It is HUGE sounding.

I had the same reaction to the Tri Dirty Booster

It’s a great variant for sure

krz4fx said:
Since I've shown some of the original EHX muffs, figured I'd show some other builders' takes on the muff circuit: 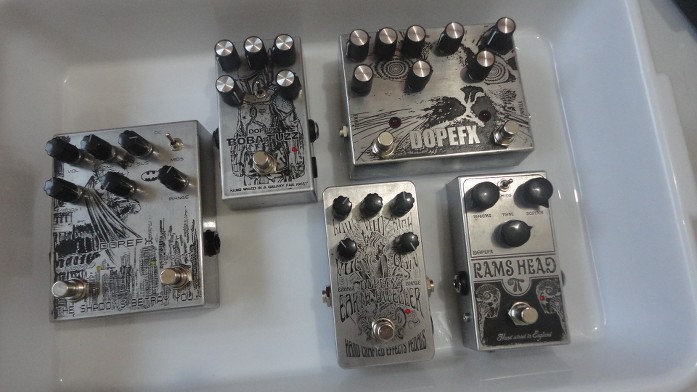 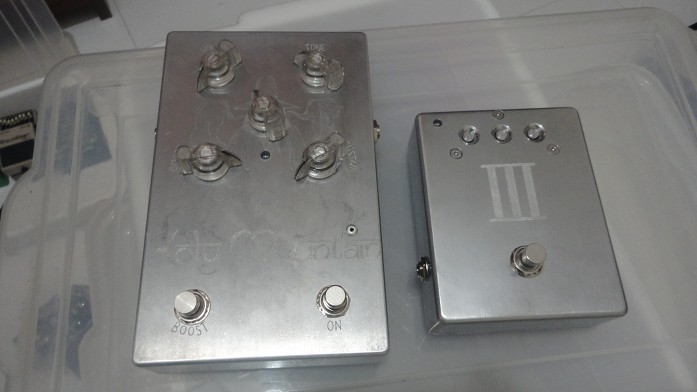 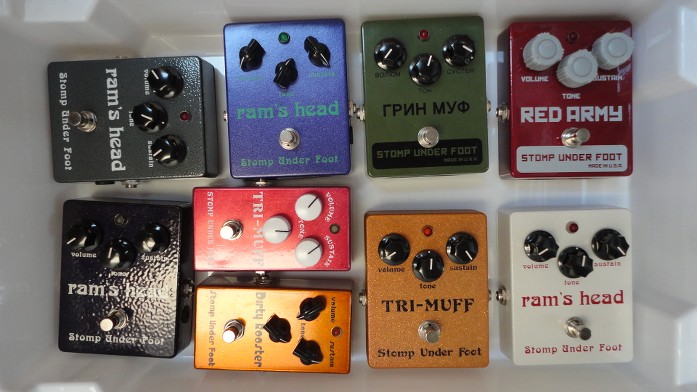 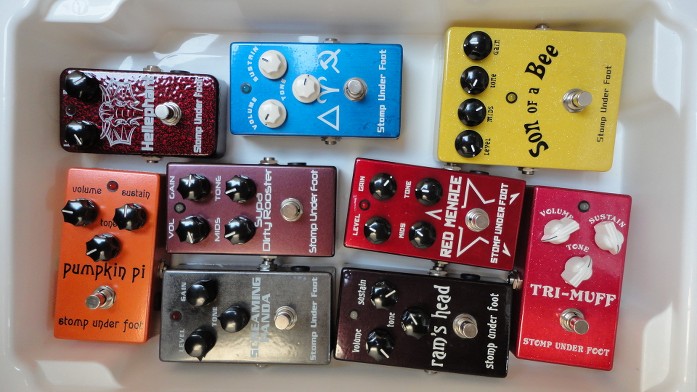 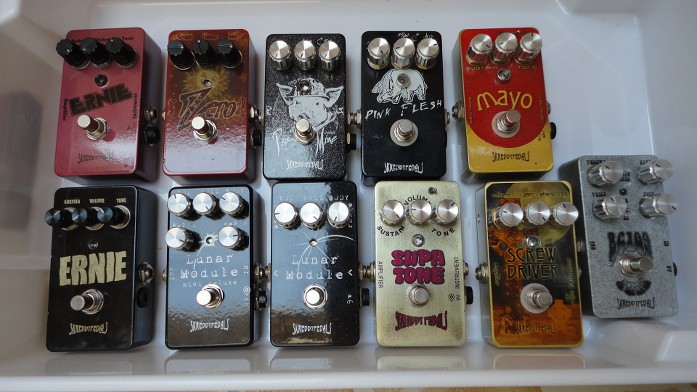 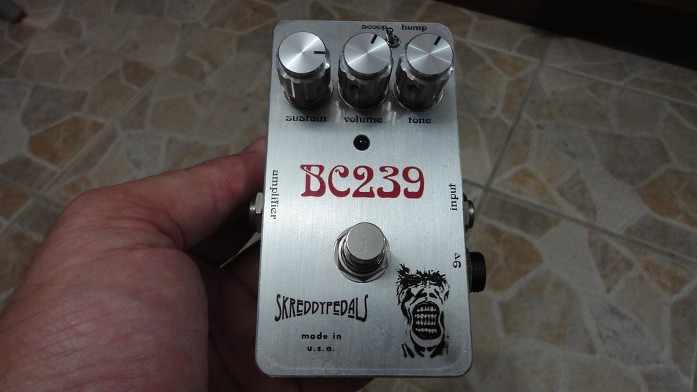 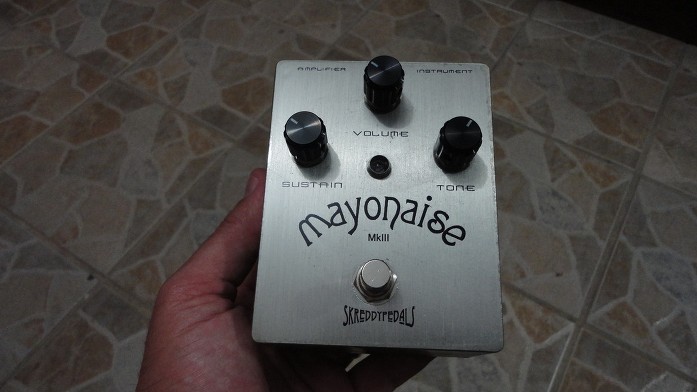 Here's an updated pic of my collection. Since last posted, acquired a Basic Audio Supa Mk I.

splatt said:
no fluxmachines (from gugu flux) for you?
Click to expand...

friend33 said:
I think we all know that would sound awesome played in bare feet on a white fuzzy rug somewhere in the southern hemisphere...
Click to expand...

Xenomorphose - My favorite track on this album. A nice long, multifaceted jam tune with xeno voices... sweet! I wish it was twice the length.
Right Rubber Wrong Neck - Love the delay and vibe of this one a lot, and that the preamble is half the track.
Nontstomp - Man this makes me extra stoked for the tourbox. That Nonts has a unique grain.
HEadQuarters1 - HEQ1 plus glitch aww yeah great combo and variation of textures!
Candirubarb & Candirudiments - Love the starved crumble. This fuzz is on my radar now...
Electron Overload - Another unique fuzz on my radar now... you enabler!

Overall just a really fun and impressive collection of fuzz textures, and cornucopia of rhythms and compositions. Fuzz on dude.. you're an animal
Click to expand...

Thanks so much! So glad it is reaching appreciative ears!

Xeno is one of my favs too... inside story... it starts with a loop played on an El Cap... the loop actually plays in the background through the first half of the song degenerating as it goes (as El Cap loops do)... you can hear it peek through again at 2:00 and again at 2:45... but by that time its a garbled mess.... ha!

Thanks again for the great review! Made my day!

wrightdude said:
Thanks so much! So glad it is reaching appreciative ears!

Xeno is one of my favs too... inside story... it starts with a loop played on an El Cap... the loop actually plays in the background through the first half of the song degenerating as it goes (as El Cap loops do)... you can hear it peek through again at 2:00 and again at 2:45... but by that time its a garbled mess.... ha!

Thanks again for the great review! Made my day!
Click to expand...

Hah! That is really cool - I didn't know that about the El Cap. Degradation is only natural after all.

Anyone like the DOD Rubberneck, after fuzz? I like my DM2w and Echoplex pedal delays. Any issues with these? The online shop proaudiostar has them for $139.

The One True King

tedm said:
Anyone like the DOD Rubberneck, after fuzz? I like my DM2w and Echoplex pedal delays. Any issues with these? The online shop proaudiostar has them for $139.
Click to expand...

Love it and that's a great price. I use mine after everything and before reverb.
There's so much goodness in there I feel confident you will dig it.

That is just a mere sample of his vast selection, a small one at that.

chrismellotron said:
That is just a mere sample of his vast selection, a small one at that.
Click to expand...

Siriusly! If the world is destroyed, @krz4fx is like the doomsday seedbank for fuzz. His collection will help future humans start over without losing all progress! Thank you for your contribution to the future well-being of this planet!

tedm said:
Anyone like the DOD Rubberneck, after fuzz? I like my DM2w and Echoplex pedal delays. Any issues with these? The online shop proaudiostar has them for $139.
Click to expand...

One last crosspost from the Basic Audio Euro Tourbox thread.

Some final thoughts as the tourbox has been parted out. Two pedals are en route to England and one will be underway to Cyprus soon. The Bye Bias is staying right here, thank god.

Apologies in advance for what may be the longest post in recent times. Feel free to skip to the clips below. I won't take offense at all.

My DAW has been acting up and so has SoundCloud, so I've spent the better part of two hours bouncing, uploading, rebouncing and reuploading and writing this excruciatingly long post. I do not reject the notion that some of the technical difficulties may be my fault, though.

As the tourbox coincided with the holidays I took the liberty of bringing them with me on holiday back home to the Faroe Islands for ten days of cloudy, windy and rain. I swung by the music store there with the tourbox (they still do all my guitarwork when needed even though they're a thousand miles of ocean away). They had never heard of Basic Audio and were thrilled to put it mildly.

I've been back in the apartment by myself for the last couple of days and have been playing so much guitar that my fingers hurt. I can't remember when that happened last.

Most of my testing with the pedals up until then had been through British style amps and sims. The treble content available in both the Orpheum and Wildcat came in very handy when playing through their Hot Rod Deluxe. There were usable sounds throughout the tone dial on both pedals playing through that Fender amp, with a lot of the good sounds being on the higher end of the dial. When playing through the British style amps the tone dial on both of them rarely went above 10 o'clock. That might also be caused by the Fender amp not being turned up real loud. So there's that.

I actually wanted to do a bass playthrough of all of the pedals, but didn't get around to it and didn't realise until two of the pedals had been dispatched. Alas, there is some bass fuzz in the clips below.

First up is a one-on-one comparison between the Super Fuzz and the Kay Fuzz, similar to the one @Empros did with the Marq Won/Supa MKI a couple of weeks back. As they're both brilliant Basic Audio octave fuzzes they have a significant common ground. Kay Fuzz is tighter and has less overall gain, Super Fuzz has considerably more gain and sustain, a more prominent octave sound and has the two toggles to make it a lot more versatile than the Kay. I've entered comments as the clip plays along. LP neck pickup rolled a smidge back for most of the clip to retain a tight bottom end and tight attack. Going into a UAD plexi sim with some plugin reverb. Disregard the noise in the clip. The power installations in our building are horrible.

They could cover for each other, yet I would say the differences could justify having one of each. You know, because more fuzz is more better.

Next up is a song I've been working on sort of on and of for two years without ever finishing it completely. It is a tad long and could do with some vocals, but I don't have a microphone and since microphones roughly cost the equivalent of one used fuzz unit, you guys have probably already figured out how that goes. There is Orpheum on the bass for most of the track, except for when there is Super Fuzz on the bass. There is also Super Fuzz on every guitar that is not rhythm guitar.

Third up is an attempt to recreate one of the things we kept jamming when we took the tourbox to my friend's rehearsal space. My Count To 5 has returned from an extended loan, so it provides the glitchy loops and drones throughout. I used all the pedals for various things along the way for this one.

Fifth and last is a track I wrote about two years ago, when I got my first volume pedal. I figured having these fuzzes was as good an occasion to revisit and try to finish it. While I did record a bazillion takes, I'm still not content as there are quite a lot of clams along the way. It features a Bye Bias trio @ 1:23, a Wild Cat trio @ 1:36, an Orpheum trio @ 2:30 and finally a Super Fuzz trio @ 2:44. Everything else was recorded a long time ago through an Eleven Rack. The bass is a guitar through a EHX MicroSynth. Even the Leslie thing in the background is a guitar run through a Warped Vinyl.

How the hell does Brian May make those multipart harmonies sound so smooth and easy?!?!?

And with that my adventures with this Basic Audio Tourbox have come to their end. I'll miss the three pedals that will go on to their new owners. And I realise that I need to get a Super Fuzz somewhere down the line, but am really stoked to get the Bye Bias. It serves so well as the Fuzz Mutant's deranged and drunken older cousin or something along those lines.

Before closing the festivities down entirely, I have to send one last thanks to @basicaudio for going along with the EU tourbox and parting with these pedals for so long. Another thanks to @chankgeez for giving great advice as we went along. And finally, thanks to everyone who participated with reviews, clips and videos.

The pedals have been to Cyprus, Greece, Slovenia, Italy, Spain, France, UK, Germany, Finland, Sweden, Denmark and the Faroe Islands. It has been good run and a fun ride.

johnetone said:
This reminds me though, is the Caroline Shigeharu a Tone Machine variant? That one has the momentary Octave feature you speak of if you are thinking about acquiring something similar.
Click to expand...

Shigeharu is a hybrid IC/NPN muff style fuzz with a parallel octavia style circuit that can be momentarily activated, or left always on. Hope that helps!