I love me some supery goodness.

Man, that is EXACTLY the look I made up my mind I was going for if I do a 212 combo cab for my Super: blonde tolex, wheat grill.
J

Bucksears said:
Man, that is EXACTLY the look I made up my mind I was going for if I do a 212 combo cab for my Super: blonde tolex, wheat grill.
Click to expand...

I would have prefered a brown face with the round white knobs to complete the motif'......but overall I'm extremely happy with it.....and it is dead sexy. :moon
A 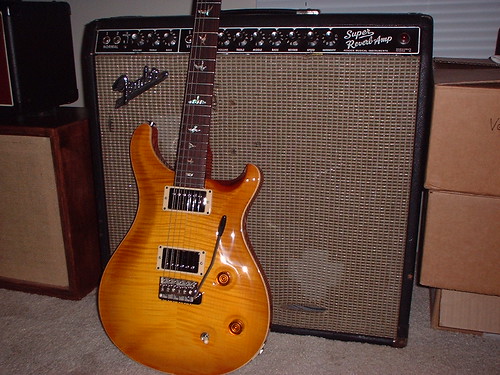 
That is just absolutely sexy looking. Very cool! And thank you for not using a flash.
A

The Super on the left is stamped 42nd week of '67. Blackface guts inside. 2xCTS (top) and 2x Rajin Cajuns (bottom) to keep things tight, great combo of speakers. This is a great sounding Super!

The Super on the right is circa '73 and has I've had it "blackfaced" (an improvement). It's loaded with 4x10" Weber Calis (probably not my 1st choice but that's how she was when I picked her up). Gives it more of a Twin vibe as it's a bit cleaner and more hi-fi.

Having picked up the '67 only a month or two ago, it's really given me the opportunity to appreciate the speaker differences. I think the CTS alnicos are the Super sound and combined with some good ceramics give the best of both worlds tonally. I'm looking forward to dropping the other 2 Alnicos into the '73 as the Calis in that amp - while complex, detailed and clean, can sometimes sound a bit "aliminium-y" for my liking. Ah, all good fun!
J

Guitar Dave T said:
That is just absolutely sexy looking. Very cool! And thank you for not using a flash.
Click to expand...

How close would you say a tremolux is to a super reverb? The reason I ask is because they seem to be almost similar output from what I already know, and aside from speakers and reverb look spec'y.

My original 66 had oxford ceramics in it. I have owned this amp since around 1980 or so - it was my first good tube amp. I finally traded for a quad of original CTS alnicos on TGP here from a what I believe to be a 68 super reverb I think. Anyhow, whatever year they are (I could check, but I am too lazy) they are the same CTS alnicos used throughout the 60s and 70s. Anyhow, the amp sounds AMAZING! It sounded excellent before, but the CTSs are somewhat less efficient and add a big fat kind of compression to the tone resulting in making the super operate at usable volumes and have excellent clean and distortion capabilities. I think the CTSs are THE speaker to put in a Super. I now have that Super Reverb tone that I just couldn't get with the oxfords (they sounded good, just not great). My CTS envy is over!

I wonder how close Weber's newer CTS styled (chicago series) super speaker comes to this tone? Not the high powered series, but the new alnico 10s he introduced?

I sent it off to Rich Kroener (time electronic) in New Jersey to have overhauled.
We talked about mods and he did converted the vibrato int. to a master and voiced it to be a bit more of a silverface tone for cut. When you adjust the master and vol the hig and mids increase so you can crank it with not flab. The guy I got the amp from also threw in 4 older carvin 'vintage 10's' (65 watts ea). tolex and some old pine planks.

I had a local cab builder make me a beautiful super cabinet (he had his 66 right there).

This thing rocks! I love it. With the master, you can dial in a touch of grit even at lower volumes. With the tone mod it doesn't always sound perfect at house volumes, a bit top end heavy, but with a bass and drums it cuts like a knife. Amazing.

With my Suhr Strat and the KOT or TS9 silver you can surf the tone. It's a complete connection from fingers to speakers.

Another thing I love about this amp is it's sell proof.
It's a players amp, modded, non-original cab. Not even close to a collectors item. So hopefully I'd never lose my mind and find some crazy reason for selling it. (like I did my first '66 <sad>)

I know Rich and have talked to him on the phone a lot (more so about 5-6 years ago - we both were involved in AGA). Everytime a get a weird bass rig question, I bug him. He knows that stuff forwards and backwards. He also gets a LOT of ampeg gear in the NE, and I rarely see it in this part of the midwest, so I can hit him up with Ampeg questions too. GREAT guy. He likely forgets more than I will ever know.

Anyhow - so you went an entirely different direction. I love that STOCK tone with the CTSs and excellent tubes. It has just enough "give" to it that it compliments the strats, teles, and humbuckers plugged into it. Before mine was too loud to play in most places, and didn't have that wonderful compression that those CTSs deliver. It sounds wonderful.

I can see how your setup works very well for you too. I just love he sound of the amp stock with the right speakers. I don't know Derrick Trucks, but I know for a fact my amp is setup almost exactly like his except for the speakers. I know his tech (Lord Valve, or Willy Whitaker, or Fat Willy - whatever you want to call him at NBS Electronics in Denver). When I went through my amp I set it up just like he does, in fact, I used to buy all my tubes from him too before I started buying wholesale. Heck, the prices and service is so good I STILL buy some tubes from him. It is worth it to have them screened so well. Those guys both taught me a LOT (and probably still could).

But I have to say, I love that super more than I have at any time I have owned it. That is saying a lot. Absolutely EXCELLENT tone.

I had a bone stock '66 with the original 'swiss cheese' basket ceramics.
It was amazing, just tone bliss. Especially with my Strat and a TS9.

That one was a collectors gem (kind of why I sold it, got some good coin for it.)
But since my '67 was resurrected from the pet cemetery I decided to let Rich do some magic to it. What's cool is all the mods a 'snip to remove', if I ever get tired of them, a snip here and a snip there and we're back to stock. Also, if the master is at 10 it's a stock tone. (well, pretty much) It's when you mix the two, or with a Katana in front of it that you really start to get the cut. If you know Rich, you know he likes LOUD, and this is set up to play a Strat though it LOUD!. Here's Rich's suggested EQ.
Bright on, Treble-10/Mid-4/Bass-10 mix the volumes to taste with a boost on the front. Uh, no need for an OD pedal. ;-)

Let me tell you with it set like that, it's screamin'!!! He got me hooked on insane harmonic distortion. (not that I set it that way much anymore!)
Nearly 100 watt Plexi tone. Crazy. That's where the carvins come in handy, they can take the pounding real well. They're made by Eminence.

Someday I probably put it back to original, but for now it's the cat's meow! Or maybe ROAR!

I've been using my 57RI Les Paul most of the time now, I don't have to crank it that much to get some killer tone, just adjust the volumes and I'm in heaven.

Are you allowed to say your amp "has balls" and also refer to it as "her" in the same sentence?
J

i have a 71 sr with a ss rectifier (flamesuit on!) anyhow it came with 3 cts alnicos and a blown cts ceramic.

i've got lots of tubes and some older jensen-quincy-becker (alnico 10s that basically look and sound similar to old jensens) i put 2 of these on top and a pair of reverend 1030 on the bottom (think more of jensen c10n a lot of bottom end and smooth breakup) ..

i wound up with rca blackplate 6l6gc to give me more of that soft compression to offset the ss rectifier and various rca tungsram and mullard preamp tubes.

this thing sounds incredible! i tried the big bottle 6l6gc sylvania and 7581 (like derek trucks uses),with my set up i preferred the rca 6l6gc.

btw, i have one of those pyle 10s like derek trucks uses it sounds very similar to my cts alnicos in the way it breaks up,,,warm and quick breakup but compresses like an alnico..

I prefer the ss recto as well. I had a diode done with the mods, but was curious so I snipped it, then went back to using a coppercap. Seems to hold the bottom together better at volume.

with some speakers out of super reverbs,the suspension (cone edge and spider) can get really loose even with the cts alnico,the semi open cab allows full excursions whereas a sealed cab dampens the excursion like in marshall 4x12.

if you have really worn suspension speakers in a super the response is never right.