Tales of the free guitar, my 3rd volume pot and a pickup swap...

I have a PRS S2 Standard 24 that has become one of my main guitars these days. Off the shelf it was functional and I've gigged with it quite a bit, but the S2 line definitely has it's weaknesses and there were clearly corners cut to justify its lower cost, especially in the area of the electronics. Just 3 months after I brought it home the volume pot started to go south, but I contacted customer support and the guys in Stevensville, MD were kind enough to invite me down and have me take the tour while they replaced the pot. Very cool...and all was well until a few months ago when the replacement pot started to crap out. Again. My suspicion was that they replaced the OEM import pot with another OEM import pot, so I ordered an OEM USA pot from them and figured I'd do the job myself this time.

As I was preparing to swap the volume pot, I got to thinking about the stock 85/15s pickups...which are not bad, but not great either...and figured that maybe, while I'm in there, I'll upgrade the pickups, too. Which got me thinking about a guitar that I have that NEVER gets played...

Back in 2003 I received a free guitar from ESP. Long story short, my company helped connect Dave Mustaine with the folks at ESP guitars and to show their appreciation ESP was cool enough to give me a then-new LTD DV8-R Mustaine signature model. It's a great guitar, but it's something that I never play because I'm just not the pointy V kind of guy, so the guitar literally sits in its case for years on end. I'm not selling it because there's a longer story that goes with acquiring it and...let's just say that I'm not getting rid of it. The DV8 and DV8-R were equipped with USA Duncan JB/Jazz pickups and I'm well aware of that combo being one of Seymour's favorite pairings in mahogany-bodied guitars. And, well, they're just sitting there not getting played while my PRS could use an upgrade...

So, yes, tonight I performed a swap and gave the LTD the 85/15s pickups, which seems somehow fitting since it's an import guitar that now has import pickups, while the USA-made PRS S2 got a nearly-new set of USA-made Duncans...and a new USA-sourced volume pot. I also recently upgraded the OEM-import vibrato block w/ a USA MannMade brass block.
The end results are very noticeable with the LTD sounding just fine for a guitar that will rarely be played and the PRS sounding much better than before with a touch more clarity and articulation...and a volume pot that doesn't sound like a bowl of Rice Krispies.

Pics to prove that it happened. 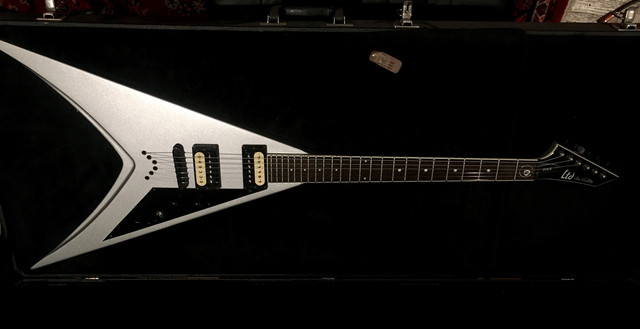 The PRS looks a little less interesting as I kind of liked the look of the zebra coils in it, but I'll sacrifice a minor aesthetic to gain better sound quality in the studio and on stage. As such, the LTD doesn't look too bad with the zebra coils and it got a new set of strings, too, so it can rest well in its case for the next 15 years or so.
You must log in or register to reply here.
Share:
Facebook Twitter Reddit Pinterest Tumblr WhatsApp Email Share Link