Tech experts: Is Boss lying to us about amp watts?

Lot of confusion going on with the terminology here. First, there is no such thing as "RMS power". RMS is used with voltage and current of the output signal, noth with their product, power. The proper term is "average". Peak power of a 50W (average) sinusoidal wave is 100 watts, that's simple waveform arithmetics. Peak and average power of a square wave are equal. Total harmonic distortion figure increases rapidly towards clipping (sinusoidal wave starts to morph into square wave) thus with higher THD ratings output ratings can be "pumped up" a bit.

In the sense that 100W output is just -slightly- louder than a 50W output few watts here or there mean absolutely nothing. In addition, human hearing senses loudness from average amplitude of the signal, being less sensitive to transients and such. The higher watts are for more articulate reproduction of signal's transient parts, not for "loudness". They are for the people who don't want to hear any "dirt" in their clean tones.

But to the real topic... IMO, the output figures might be bit "bloated" in some sense. Class-D amps in general operate at remarkable efficiencies (close to 100%) so in long term average one can expect the amp to produce almost the same amount of output power than the stated average power consumption quoted in the amp's rear panel. Maybe a bit less, few watts here or there, who cares... In addition, an amplifier can easily produce momentary output power bursts higher than the quoted figure because - as noted earlier in this thread - amplifier's power supply stores energy. So I wouldn't be surprised if a class-D amp that draws about 70 watts of power from the grid can produce 100 watts of output power for a duration that is sensible in the given (musical) context. This brings us to the expected "crest factor" of the output signal, which by no means is continuous sinusoidal wave.

I understand how continuous average output power ratings make more sense if the amplifier is used to drive an AC motor... for hours. But now we are talking about context of (re)producing signal of musical context, which is very "transient-heavy" and has distinct envelopes even when playing power chords with gain on ten. Yes, often burst power rating is adequate to describe the actual output power figure. The amplifier will never have to produce it's quoted power for sustained periods. Yes, quoted output power figures of class-D modules are often burst power ratings, not continuous average ratings. Test gear will reveal it, but in practice the amplifier never faces such stress. Even in the context of heavily ovedriven guitar (which can resemble square wave output) the output is rarely continuous in a long term, amplitude considered. Envelopes of the output signal are likely apparent for everyone who has ever recorded guitar tracks with computer software and I never had to turn master volume of >50W amps -THAT- high to cut through.

In addition, overdrive characteristics of class-D amplifiers is another topic in which generalisations should be avoided. Overdrive characteristic are highly dependant on architecture of modulation and gate driving circuits, which come in numerous different types in class-D amps of today - all expected to behave somewhat differently than others. Some overload "gracefully" with nice soft clipping, while some are.... Let's just say less graceful. One can expect anything, although I'm inclined to believe that modern class-D amps do have moderately "graceful" ovedrive characteristics designed in. It would just make sense because every sensible class-D design must prevent overmodulation by some means.

Many musical instrument amps also include external (to class-D amp module) compression or soft clip limiting circuits to avoid overdrive of the class-D amp as is. None of this can be predicted from sole description "class-D". Roland (Boss) has included soft clipping to their SS (musical instrument) amps before, probably these onesl have one too. Maybe the class-D module was rated for 100W (average) but the pre-limiting circuit starts to soft clip around 70 watts (average), which in turn holds average power consumption low.

I'm pretty sure the 100-watt figure, in average, is sensible for reasonably long duration of output signal, but real "average continuous" power figure is likely closer to 70 watts. In sake of apparent loudness you will hear none of this though. A 100W amp merely sounds slightly cleaner than a 70W amp during note attacks when master volumes of both amps are dialled close to overdrive threshold.
Last edited: Sep 20, 2017

Here's a 100W amp. No power supply but that is the chip TDA7294 with supporting components.
It fits in the palm of your hand weighs a few ounces and costs around $20 or so at the consumer level for components.
The appeal is obvious.
D 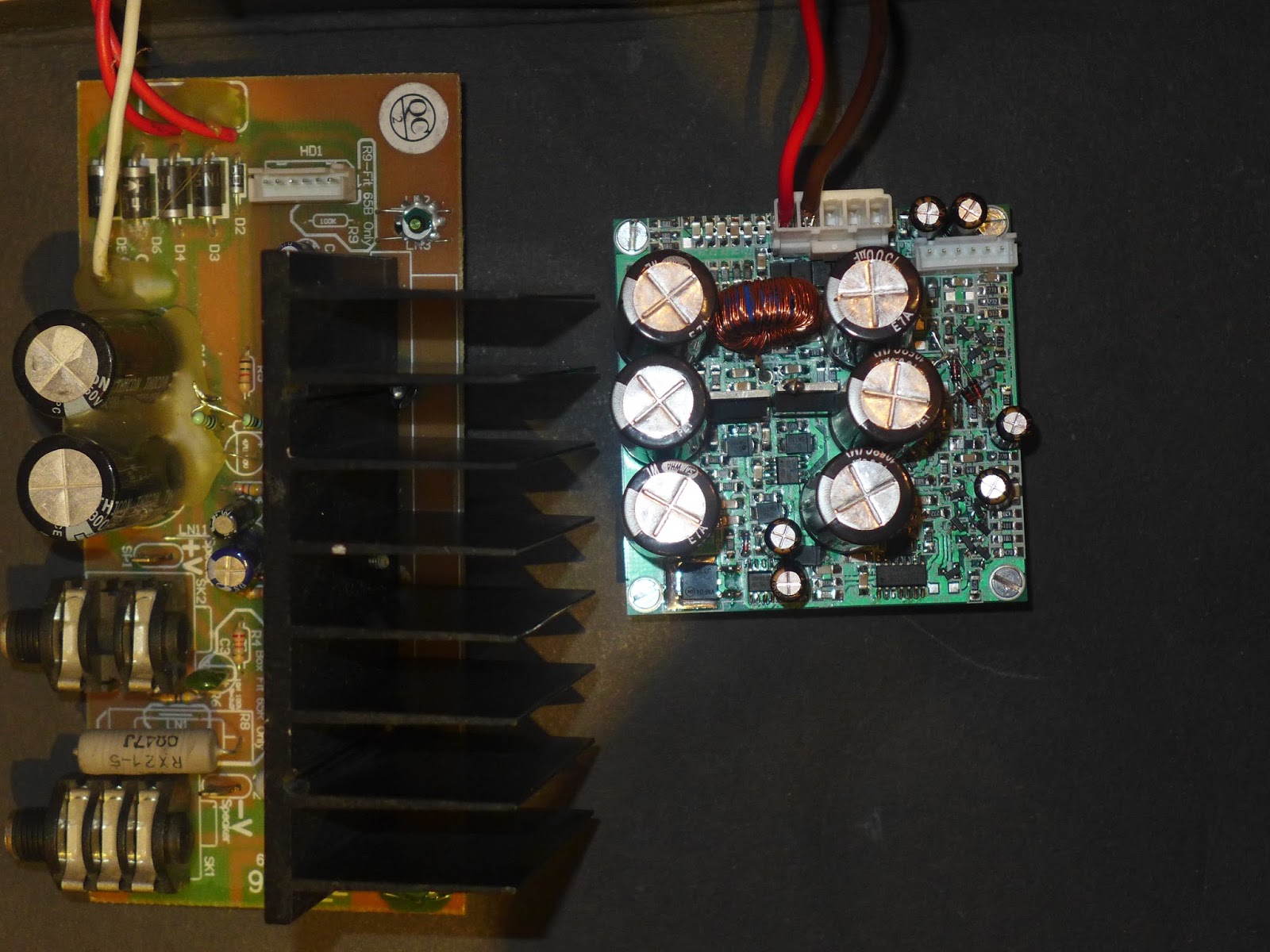 I am not sure about the definition of 'appeal', but I won't miss TDA729x and the likes when manufacturers pick up decent class D designs.

Needless to add - by 100W I mean 100W of power continously into load at 40 deg.C ambient.
That TDA thing with that heatsink will thermally shut down at maybe 30W.

darkfenriz said:
That TDA thing with that heatsink will thermally shut down at maybe 30W.
Click to expand...

You have to heatsink it but it is 'rated' at 100w per the datasheet.
D

Tone_Terrific said:
You have to heatsink it but it is 'rated' at 100w per the datasheet.
Click to expand...

Some quotes from TDA7294 datasheet:

Note (*): MUSIC POWER CONCEPT MUSIC POWER is the maximal power which the amplifier is capable of producing across the rated load resistance (regardless of non linearity) 1 sec after the application of a sinusoidal input signal of frequency 1KHz.

Wow, thanks.
That '40W' stamp on the speaker adds another dimension to our discussion here, don't you think?

darkfenriz said:
Wow, thanks.
That '40W' stamp on the speaker adds another dimension to our discussion here, don't you think?
Click to expand...

the 40 watt speaker is the internal Katana Head 5" speaker

the Katana Head is unique as it includes both the main power amp , and a separate scaleable 30 watt power amp dedicated for the internal 5" speaker