I loved That Pedal Show until the last 4-5 episodes; I've started to tire of the format and I'm finding the quietly snobbish attitude to the cheaper pedal brands they allow on the show a bit irritating.

What do you guys make of the show lately?

I'm waiting for part 2 of the Metal Zone episode

this reminds me of people on tgp listing a salesman doing demos of pedals they sell as one of their favorite guitar players.

theres a lot of cool stuff online, no idea why anyone would watch that.

there's a lot of good information on the show and the hosts are very likable. the episodes are a bit long for my liking though.

I've been wondering how long they can keep this going. It's great, and I'm still learning, but still...

I thought the custom "That Pedal Show" Muffroom Cloud was cool. Too bad they weren't able to get a larger batch made. 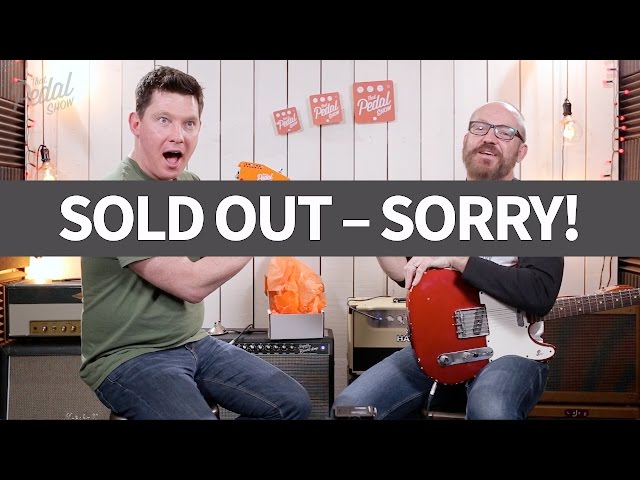 They can be a bit snobbish towards some gear, but hell, so can I. I still enjoy it, I waste a fair amount of time on youtube and it's better than a lot of stuff on there.

That guy on the right has a sweet orange Huber he plays now and then and I totally GAS when I see it.
Last edited: May 5, 2016

Dr.Picklebottom said:
this reminds me of people on tgp listing a salesman doing demos of pedals they sell as one of their favorite guitar players.

theres a lot of cool stuff online, no idea why anyone would watch that.
Click to expand...

Sometimes it's nice to hear someone play electric guitar SOLO, without drums or vocals or keys to muck things up.

I never noticed their snobbish attitude. What's an example?

As with all things on web land regarding guitars and opinions, I take some of their thoughts with a pinch of salt.

However, the chance to hear so many pedals played side by side with a variety of other gear, recorded well, will just not get old.
E

I still enjoy their show, find it informative most of the time.

DakotaRed said:
Sometimes it's nice to hear someone play electric guitar SOLO, without drums or vocals or keys to muck things up.
Click to expand...

No need to apologize. There's nothing sad about watching a musician play. If you like the musician - good. If you don't -- good. It's all subjective and should be considered as such.

Besides, these so-called "salesman" are better players than half of the "posters" here on TGP.

It's not terrible but they can occasionally look down on cheaper brands, even Boss: it's not as bad as some guys here but it has wound me up a little sometimes.

I hope they keep making the show but just lately the enthusiasm seems to gone out of it a touch - I'd hate to see it go on too long and fizzle out.
D

I've watched a few episodes, but can't say I consume it religiously. I've learned something for each one, and generally find their banter humorous.

Never heard of it.
E

rummy said:
Never heard of it.
Click to expand...

Well, now you have

I don't know that they're terribly snobbish. They have their preferences, but they don't slog stuff off very often. I would cite the Big Muff/amp interaction episode as an example. They run the Big Muff through a Marshall clone (they love it) and then through a clean Fender Twin (they can't stand it). They nevertheless say that the Muff/Twin combo is a sound that some people might like and use. So while retaining their opinions, they're open minded. Another example would be the real Echoplex vs analog and digital delays. If they were snobs, they wouldn't have tried the EP Booster with the Timeline or other pedals. They would have just slogged the new stuff and praised the EP-3.

I've learned a lot from watching them. The Muff/amp matching show was particularly good and helpful to me. EQ and compression episodes have also been great.

I'm not sure if it's my waning interest or something to do with the episodes, but lately I haven't been as captivated as I was upon initially discovering the show. There's only so much interest this stuff can provide. Oh wait, did I say that on TGP?

Its still a good show, but the episodes keep getting longer and longer. The problem is that embedded in the episode is a golden nugget of information. But I don't want to sit through 45 minutes to get that golden nugget.

But I do love the show, and they have proven that most of the opinions and advice on TGP are not informative nor helpful.