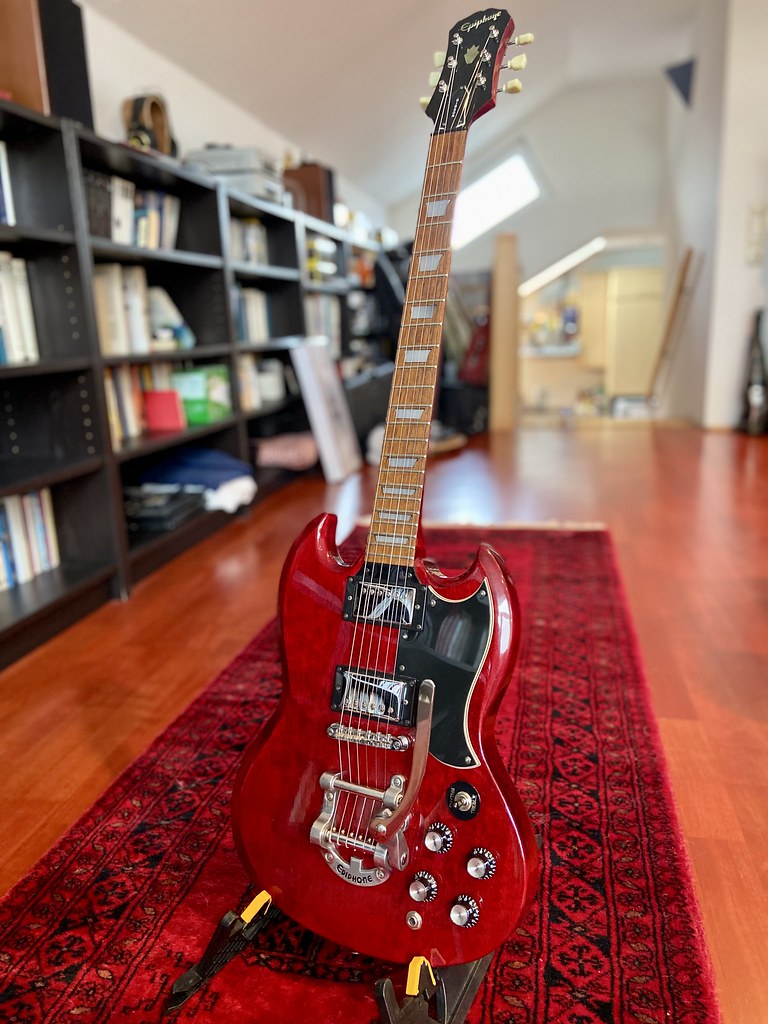 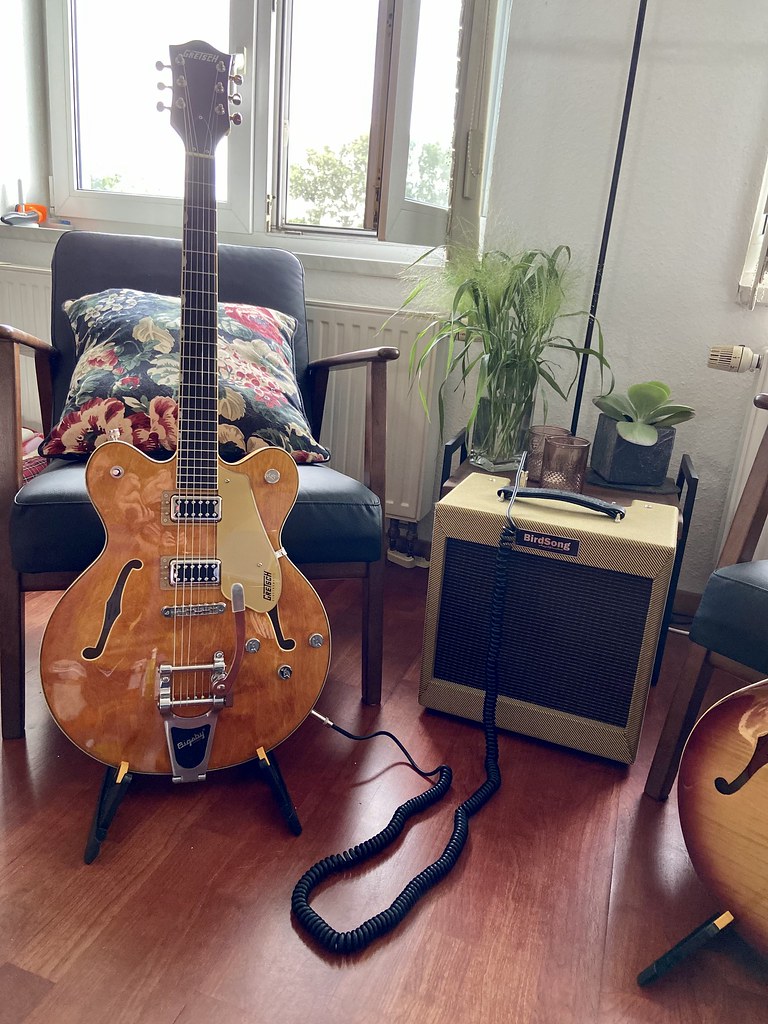 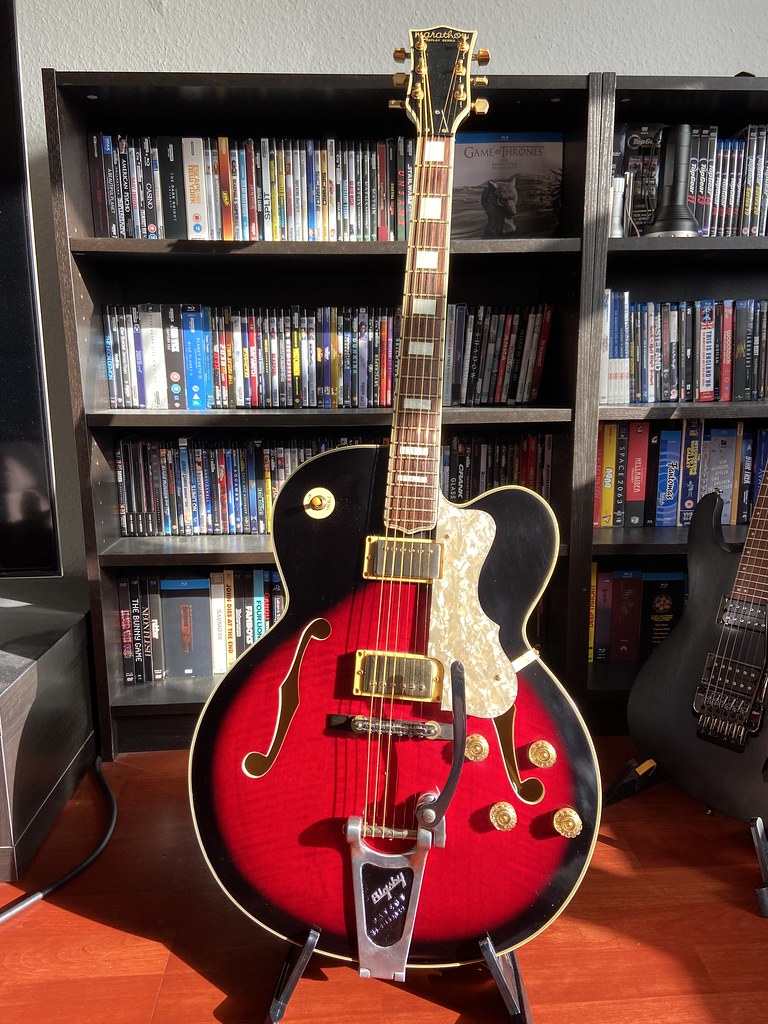 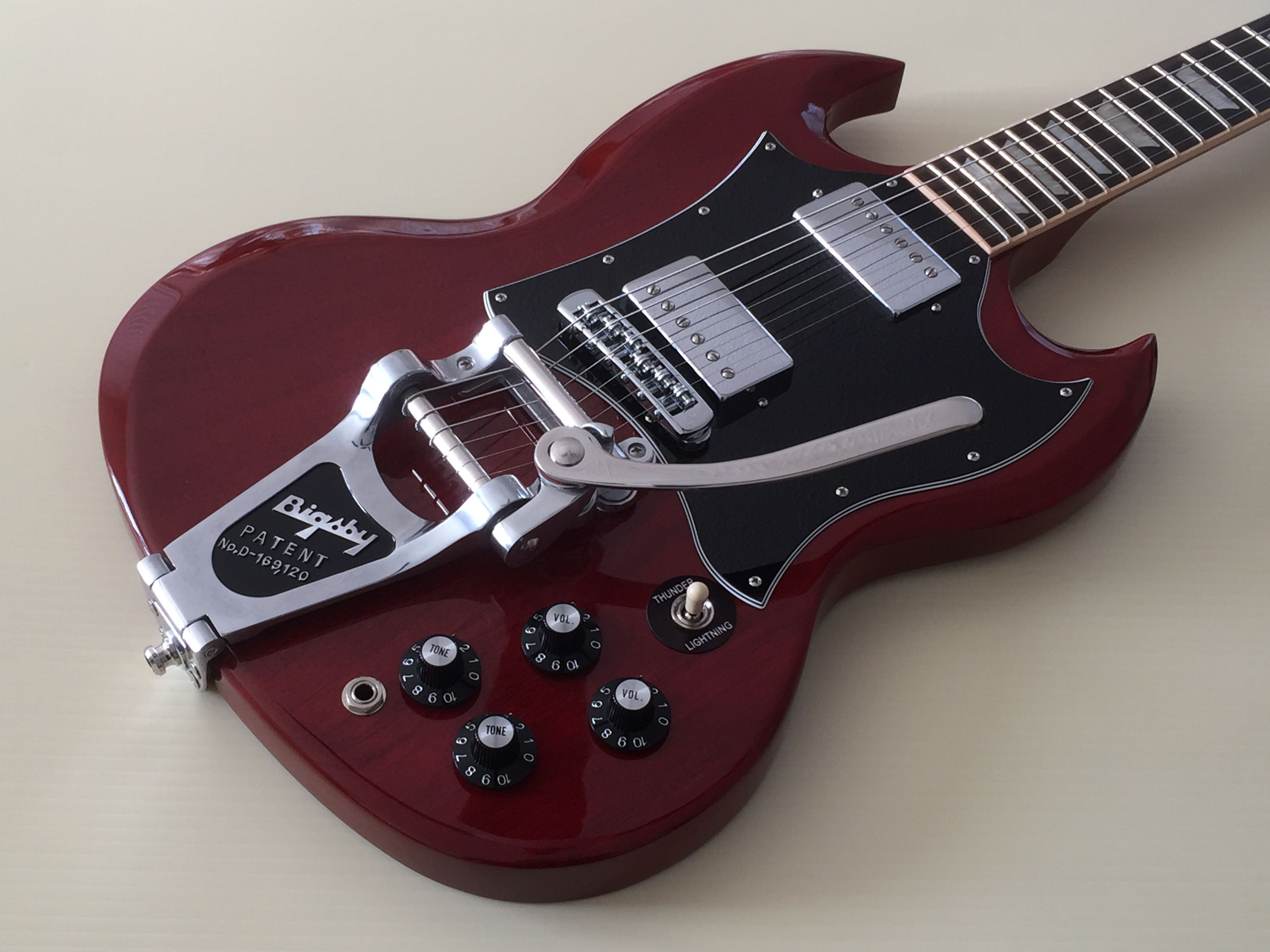 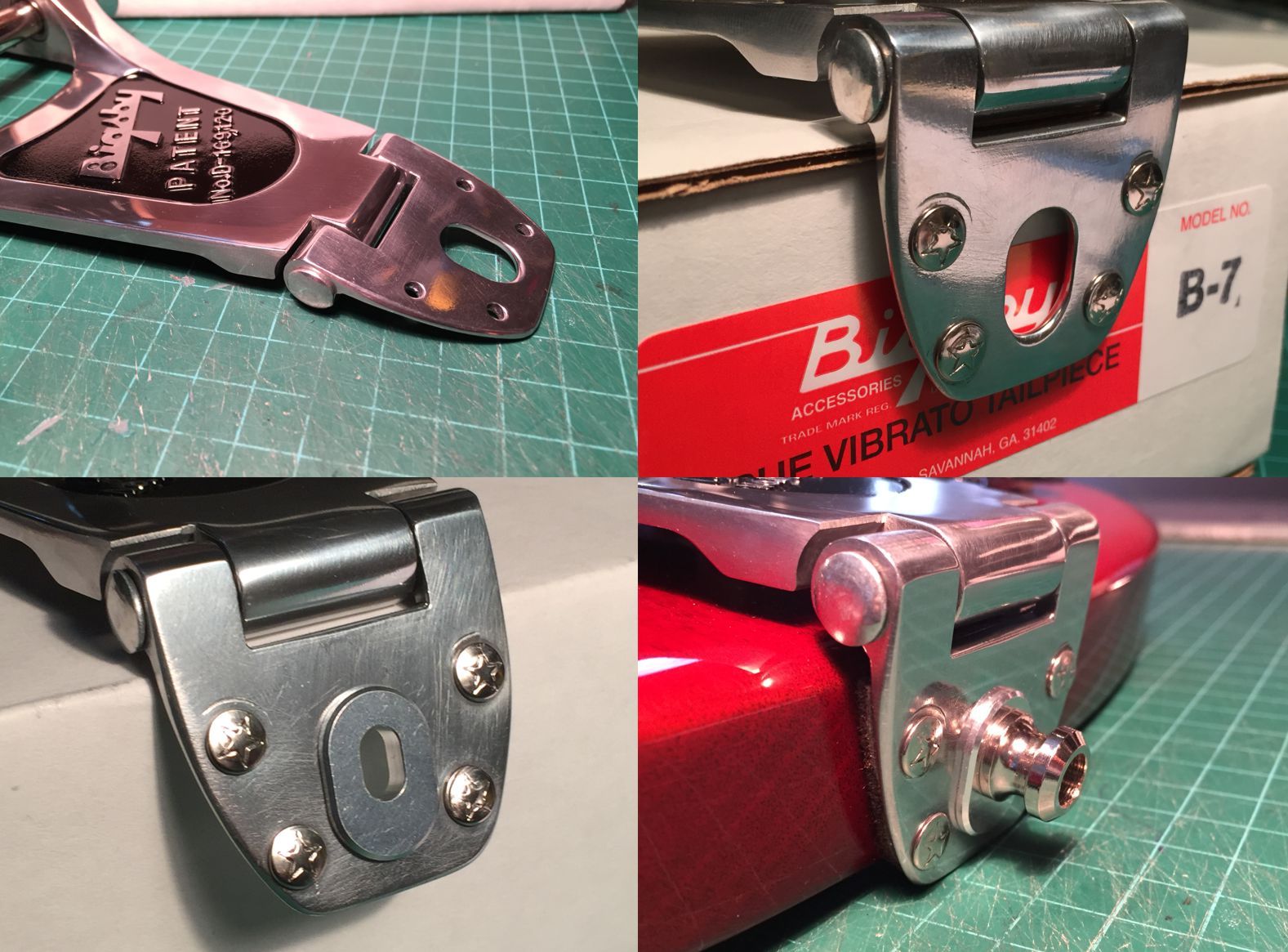 The spring that came stock on this was way too stiff. Replaced with a reverend spring, added some nut sauce to the nut and saddles - now it plays great! RhytmEarl said:
Not the best picture. The Bigsby wasn't original to the guitar but was on it when I got it so it stayed. Plus I like it. 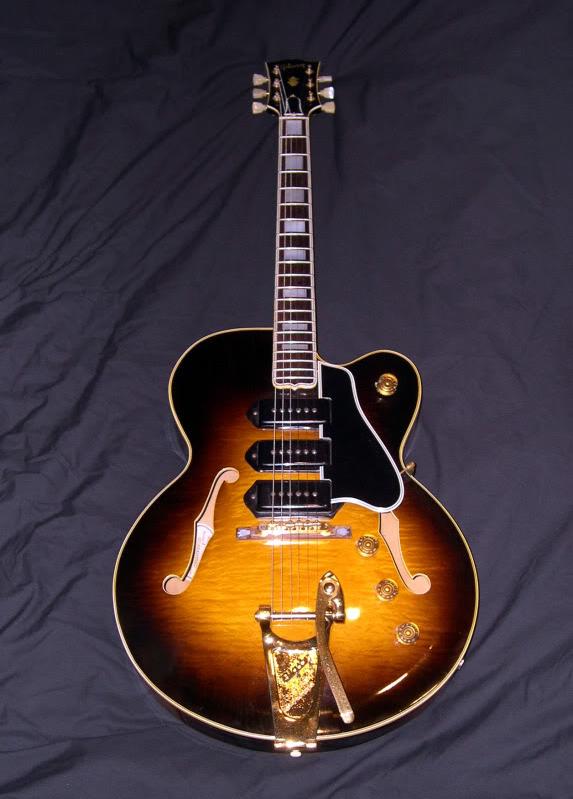 Yes, just hate changing strings on one. Those little nubs....are you kidding, this is the best you can design?

mikebat said:
Yes, just hate changing strings on one. Those little nubs....are you kidding, this is the best you can design?
Click to expand...

and I thought changing strings on a floyd rose was bad.

What happened to this LP? ..is that a screw between the pickups? Looks like it seen some serious action

datguytim said:
What year is that beauty?? I’ve been jonesing for an ES-5 for years!!!!!
Click to expand...

1953. Other than the Bigsby and the bridge, it's all original including the case.

I have been seriously thinking of gifting it to my niece-in-law. She's a 15 year old burgeoning jazz guitarist. I've already given her all my guitar books and transcription books. A small library...lol...no exaggeration...50 years of books. When I was learning I had crap guitars and always thought the reason it was so hard was because the pros had these magic guitars that were so easy to play. She deserves a "lifetime" guitar because she's quite serious about it. And I rarely play it any more. It shouldn't sit idle. 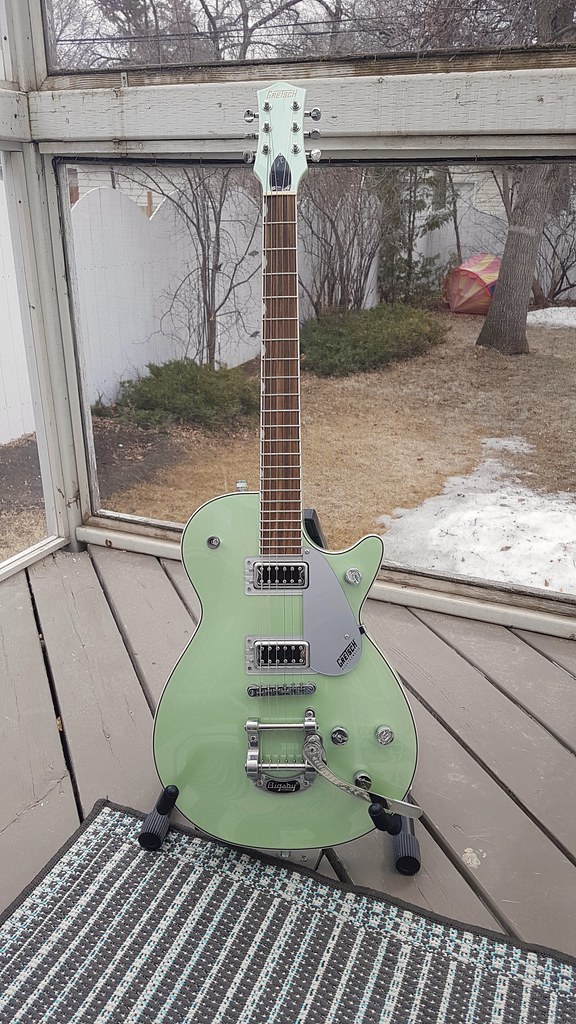 No, never, not gonna.

Never had one since I love a good Floyd Rose but there is no doubt the nostalgic look is very cool. I bet they must be set up right. Like a Floyd if you can’t work on it yourself you probably should not have one.

monkeybrains said:
Please more info on that. A 54 reissue is one of my dream guitars. A bigsby equipped 54 reissue - oh boy!!
I got a 70s custom that I fear if I put a bigsby on it would make it weigh about 20lbs.
Click to expand...

It's a great guitar. They are certainly more rare than the usual R9 etc, as far as I can tell. I don't think I'd be going out on a limb saying it's probably my favourite of all my guitars - though I don't play it all that much because yes, it is heavy.

I got it about fifteen years ago for an absolute steal. I'd just bought one of those Les Paul Deluxe reissues that happened around 2006 or so - they were about $1700 CDN new at the time (how things have changed!). A buddy of mine who worked at the local music shop called me at work and told me to go home, get the Deluxe, and get in there right away. So... I did. I showed up, and this R4 had just come in as a trade in. My buddy did the deal, and I traded that new Deluxe straight across for the R4. So... Talk about a criminal deal

These Customs have an incredible sound. The single coils give it a bit of snap - I would say it sounds like nothing so much as the biggest, baddest Tele you've ever heard. I hope you find one some day!

I really like the sonic textures they add with just a little vibrato to chords.. Epic pain to re-string, but love the look of them.
B

I just love the look and the shimmer, had always thought about putting a bigsby on my other guitars but ended up first getting a epi wildcat and then replacing that with a dream es-330 now I’m all good

Johnms4 said:
They’re alright by me, and this one (the one from the NGD you mentioned) is still holding tune pretty damn well.
View attachment 478230
Click to expand...