The more expensive the pedal the brighter the led. Please stop it!

Not my idea as I'm sure someone already mentioned this tip on the page but I used one of my daughter's googly eyes on the Gunslinger.
It's about the right size and I just glued it on. Works great.

My favorite LED is the Orange Crusher... it glows with a lovely pale orange creamsicle color... my Random Vibrato wants to be in a JJ Abrams Star Trek movie! 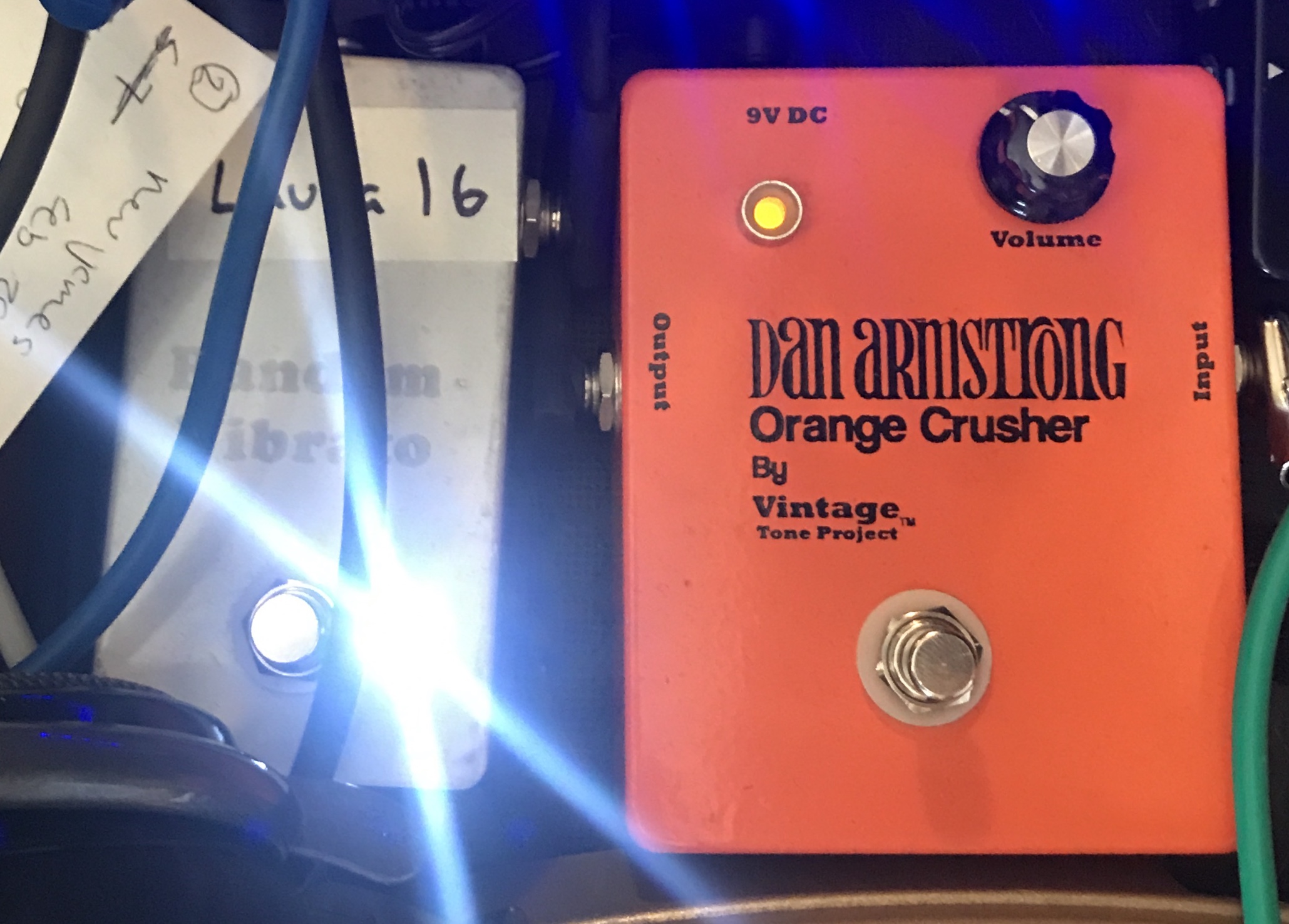 ClinchFX said:
As someone who prototypes using SMDs on strip board, I find SMT far easier than through-hole.

Early LEDs were dim, and required 20mA, often their maximum rated current, to generate useful light, even as indicators on pedals. Nowadays, high brightness LEDs are easier to obtain and often cheaper than low intensity LEDs. Modern medium and high brightness LEDs require only a few mA to produce more than enough light for a pedal. Unfortunately, there are folks out there in pedal land who still believe that all LEDs must be fed 20mA.

Reducing current by putting a resistor in series with a LED will reduce brightness, but there is a potential problem. When LED current is reduced too far, the LED can become a wideband noise generator - something you really don't need in a pedal.

Using a carbon-track trimpot to adjust brightness seems like a good idea, but carbon trimpots deteriorate when used with DC current and they end up with dead spots.

We have solved the brightness problem by using a light pipe through the front of the enclosure. The LED on the PCB inside the enclosure points at the inside end of the light pipe which diffuses the light while passing it through to the front of the pedal. Light pipes are not new technology - they have been used for many years in many/most consumer items that have LED indicators.

Boss still use low brightness LEDs because they can buy multiple thousands at a time, and that size buy will make them very cheap.

That right there is some useful info! Thanks Peter.

patient81 said:
Not my idea as I'm sure someone already mentioned this tip on the page but I used one of my daughter's googly eyes on the Gunslinger.
It's about the right size and I just glued it on. Works great.
Click to expand...

Appropriate since googly eyes is what you get from looking at a bright LED.

I have a few pedals with too bright LEDs, but I can't quite make out their names...

Yes. For the love of all that is holy, stop with the blinding blue lights.

Has anyone mentioned Keeley yet? I had one off his pedals and the LED was just fooking stupid!
W

The brightest LED I have is on an Akai overdrive I got for 30 bucks. I only got it because of the great Musician’s Friend 150% price matching promotion of 2012.
H

I think EQD could just cut to the chase and release a pedal that's just a grid of 64 LEDs running in series at 10A. Instant blindness plus the versatile "experimental tone tool" of having 64 diodes burst in unison. The flying shards of plastic add street cred to your performances
B

Yes, with cheaper pedals they have to save on many things among which the quality (the brightness) of the led.

Weird.
I prefer them brighter. I’d rather they be too bright than too dim. *shrug*

I haven’t had too much trouble with this from most manufactures, but it is definitely a big pet peeve with all EQD pedals.

I do the tiny drop of hot glue from a glue gun thing to mine. Works perfectly, and easily removable without damage.

Dr.Twang! said:
I have Bluetape photoattenuation mod kits available from $299 plus shipping.
Click to expand...

They are not worth the money unless they are boutique.

I was in a show where the opening was totally dark for a good reason. We played minimal one week series in each venue, so after the first night there wasn't a real need to have extensive sound and staging checks anymore. Then i brought a new pedal at sunday. The light guy almost got a heart attack when the curtains opened and instead of all black there was a very bright blue beam (lots of smoke) exactly in the middel of the stage.

The blue led of dunlop pedals is really insanely bright.


That being said turning all the lights off and basking in its glow while playing can put the mind in a pleasant place to remove the thinking mind out of the equation. 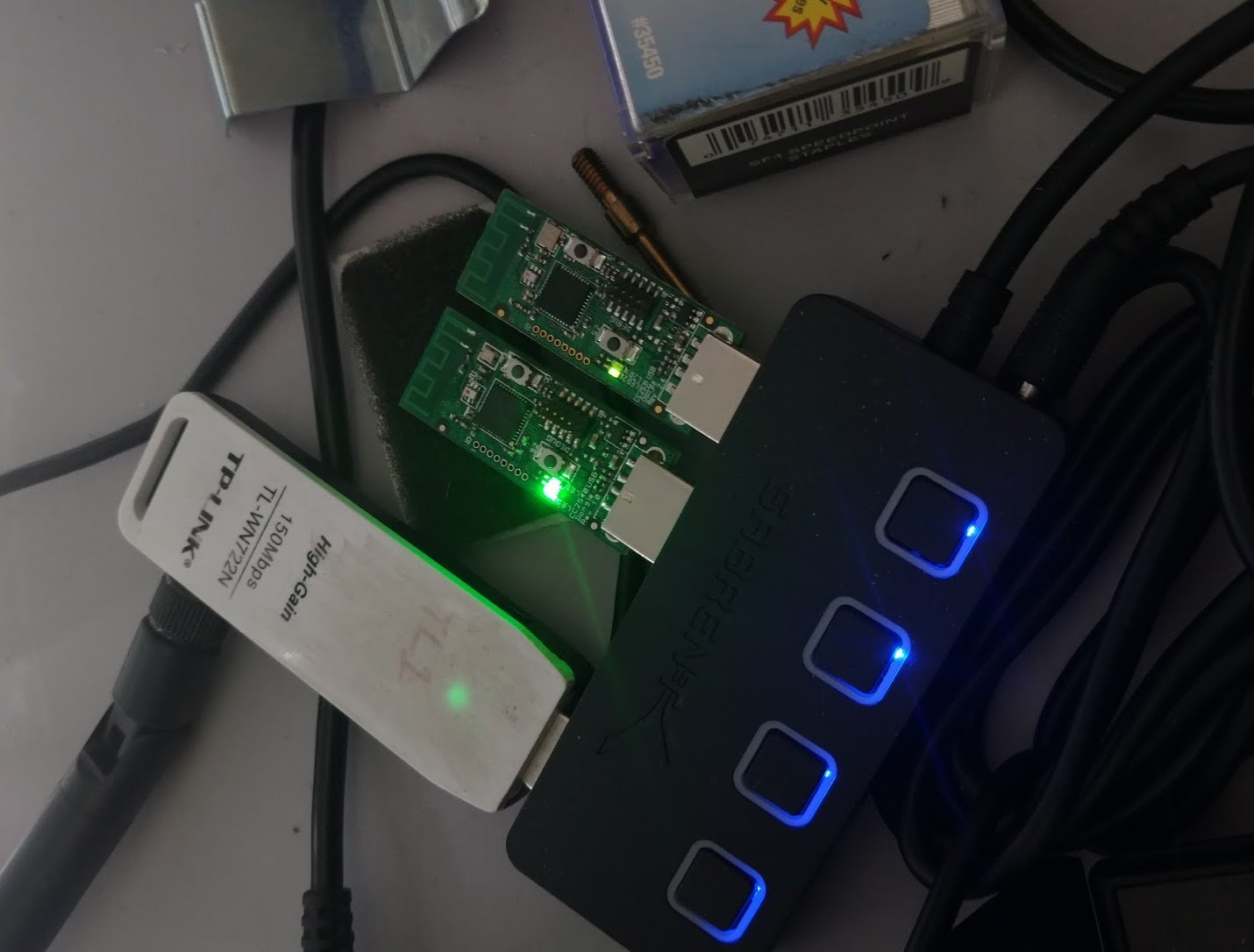 This is kinda funny to me because I've run into a ton of blatant knock off parts (the above are bluetooth sniffers, basically... analysis/security work), where the cheap knock offs have the brighter LEDs

The real one is the one on the right.
N

Borealis said:
I put a piece of masking tape over the LED on my Earthquaker Terminal - it was blinding.

My Fjord Fuzz Gjallarhorn has an internal trim pot for the LEDs - pretty neat!