"I Wanna Be With You"

The Raspberries usually played this song after starting off with The Beatles
"Ticket To Ride" as the intro.

ok, i'm really gonna date myself, but i think i saw The Raspberries perform on The Kroft Supershow (a popular saturday morning kid's show). anybody else remeber seeing them or ever remember the show? that pic of the Raspberries Rolls looked familiar also and made me think of it.
K

Producer - Jimmy Ienner shows you how to produce a Hit Record.

Capitol Records never hid the 'fact' that they were creating a Corporate Band
with 'The Raspberries'.

They had no problem releasing the figures on how much money that they were
investing in their Corporate Package.

They were shooting for a band with a clean image, and one that they could market
to the Teenage Girls {Ages; 12 thru 18}.

That is why the Music Critics blasted them as a 'contrived' Madison Avenue Project.

I like the Raspberries first two albums. It gets schmaltzy, fast. But their good songs are *very* good IMO.

My band sometimes covers "It's Cold Outside" by The Choir, a Cleveland band which kind of morphed into the Raspberries.

'The Raspberries Goodwill Tour of Europe'

Capitol Records 'backed' the Tour which was for January and February of 1973,
and to include concerts in >
* France
* Germany
* England

They have about 14 songs I like after having gone through their catalogue. Would make a great compilation. Great band, great playing, great song writing, great singing, great sound, and the drummer is an ABSOLUTE beast.

I'll post those songs when I get home from work.

Bunky said:
They have about 14 songs I like after having gone through their catalogue. Would make a great compilation. Great band, great playing, great song writing, great singing, great sound, and the drummer is an ABSOLUTE beast.

I'll post those songs when I get home from work.

Jim Bonfanti was a great drummer.

chillybilly said:
I will take the worst band over the best critic. Critics then and now all too often have an agenda. They believe, and are even encouraged to do so, that their tastes should be the tastes of the masses while simultaneously deriding what the masses find popular.

Critics who are coddled, travel with the bands (see also: White House press corps) and plied with food, drink and corporeal pleasures are almost guaranteed to give positive reviews or even venture into the creation of various legends, myths, rumors, etc., most of it pure fiction and the rest shameless embellishment.

In the days of the printed page critics were given far too much latitude and power in declaring this better than that, stating that certain bands, genres, etc. were over and done despite mountains of evidence to the contrary. Their 'trendsetter' status was self-declared and therefore arbitrary and artificial. Magazines implied - or insisted outright - that their opinion of music was more important than the music itself.

And then there are the critics' bands. Hear the term 'critically acclaimed' and you can get short odds on the band being kindred spirits with the critic i.e. in constant danger of disappearing up their own backsides.

Finally, the critic's lexicon, in which 'eponymous,' 'elegiac' and other words rarely used outside music reviews are worn threadbare.

Critics claimed to detest cliche' but employed it far more often than any 12-bar blues band.
Click to expand...

Jahn said:
The lead vocalist reminds me of Jeff Buckley - that vibrato.
Click to expand...

I hear a lot of Chris Cornell in that "Tonight" promo video.

Gretsch&Vox said:
The background vocals are prominent and perfect. I like this rendition better than the studio version:

Love this -- it feels slowed down a tad and thus a bit "heavier" -- but prefer the slightly more propulsive tempo of the studio cut.
K

'Berries in France' For Music Mart

The American Rock Band will be the feature band at 'MIDEM 73'.

The Raspberries played to 10,000 on Thursday, January 25th at the outdoor
Palais des Festival in Cannes, France.

The next night {Friday, January 26th} the band played at the Palm Beach Casino {France}
to a crowd of 2500 {Special Invite Passes}, as well as '300' Music Executives.

The American Rock band proved to be competent, and very professional. The Music Critics
stated that the American Rockers are a combination of the English Pop-Rock Bands >
'Badfinger' and 'The Merseybeats'.

"Hard To Get Over A Heartbreak"

Dave Smalley >
I had this heavy Bass intro that I wanted to use for a song that weaved
in some George Harrison guitar playing.

I was looking for a George Harrison 1970's upbeat tempo in this song.
But I wanted a hard-choppy intro to set the pace.

A year later {1974}, 'Kiss' {Gene Simmons} was using my Bass Line to this song
on a few of their developed songs.

Was a take off from 'The Mods' {The Who} meet 'Badfinger'

Management {Capitol Records} had visions of developing a Rock Opera theme
for The Raspberries {ie; Tommy}.

Drummer - Jim Bonfanti did one Hell of a 'fast-rolling' Keith Moon imitation here
on the Drums.

And then a 'Who / Badfinger' type finish.

Interesting articles on Drummer - Jim Bonfanti, as he was being called
'The American Keith Moon'.

My older sister and her friends would listen to this stuff all the time, I remember all those albums and promo stuff.

I can appreciate their playing and ability now, especially compared to todays' fluff, but hearing this corny stuff drove me to Cream, Sabbath, Zep etc.
K

Wally Bryson {Lead Guitarist} > added in "Come Around And See Me" which was a
Melodic song with a blend of George Harrison and a Flamenco-style.

Also, "With You In My Life" which was a 'novelty-jazz' song that sounded like
Paul McCartney and a Ringo Starr compilation.

And "Get It Moving", which was a close re-make of "Revolution" by The Beatles.

Wally Bryson {Lead Guitarist} > added in "Come Around And See Me" which was a
Melodic song with a blend of George Harrison and a Flamenco-style.

Also, "With You In My Life" which was a 'novelty-jazz' song that sounded like
Paul McCartney and a Ringo Starr compilation.

And "Get It Moving", which was a close re-make of "Revolution" by The Beatles.

Wanted an American Group with a 'clean-cut' image that they could build into a
Corporate-backed Band. 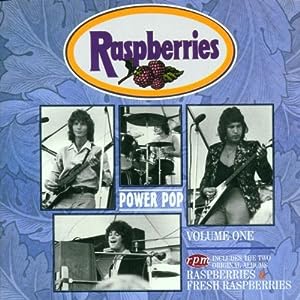