Smashies said:
One thing I need to ask Eric about is how much the 1958-inspired DGs with 4 inputs differ from the reissues that often have only 2 inputs, one being a "1 + 2" input.

That is, how much more flexibility is there in the 4-input repros when it comes to jumpering inputs. So far, I've only A/B'd two inputs at a time, but not with any inputs linked/jumpered.

There must be an appreciable difference, especially since there is a "treble" and a "normal" input for each channel on the DG I have.

Do the new/reissue Supro amps with two channels (one input per channel) make them more akin to a "normal" channel or a "treble" channel?

2 channels
1 vol control per channel
2 inputs per channel: normal and treble
Tremolo only on channel 2
No standby switch 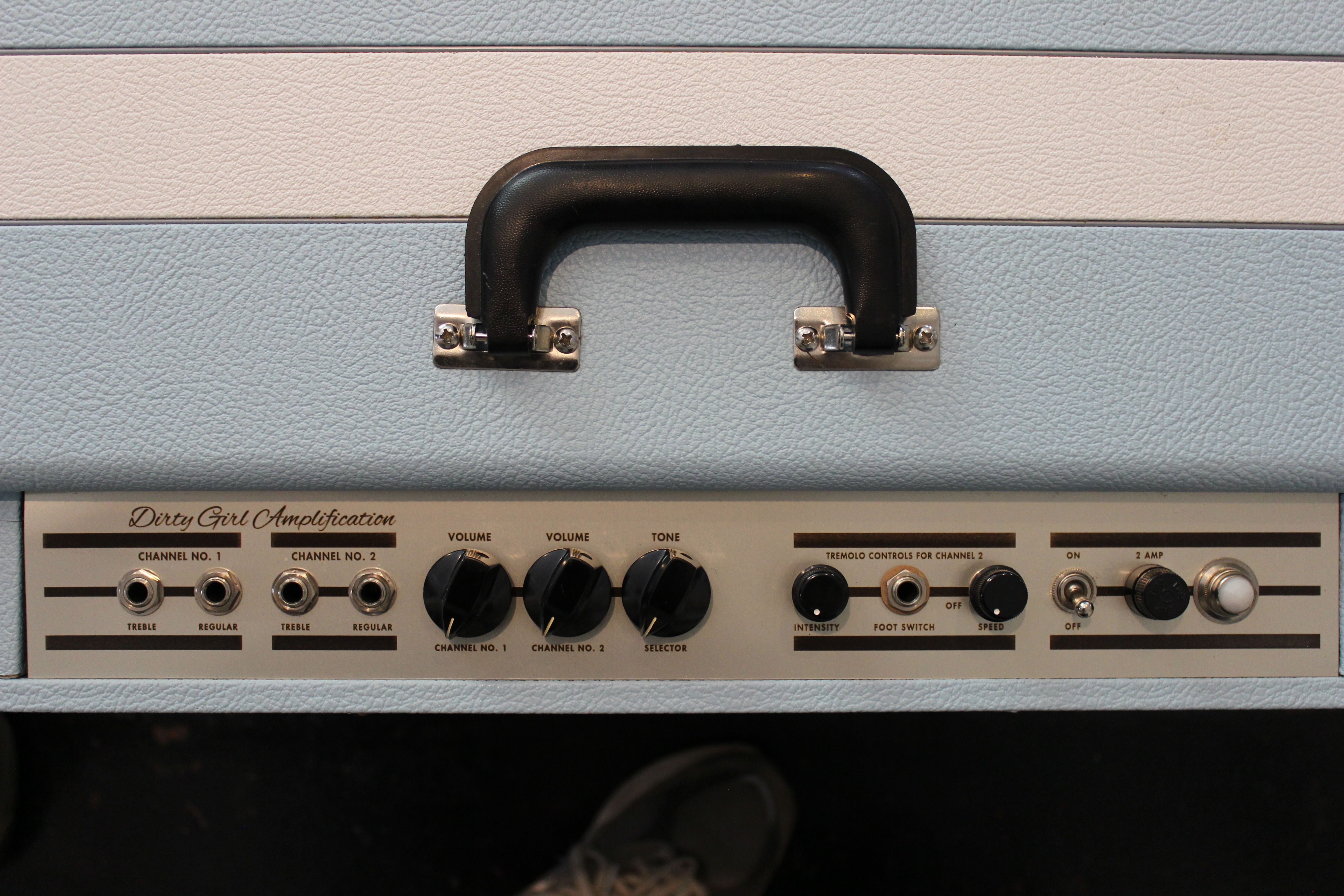 The reissues are pretty different amps overall, with major changes to the phase inverter design, preamp, etc. They're pretty much entirely different amps, although they sound good and are cool. I recommend them to "regular" people often (regular meaning not amp geeks looking to get into vintage)

Old supros have a capacitive input and a resistive input, rather than the fender trick of a high and low input split through different values of resistance.


Valco as a company just didn't document this stuff. If your amp company could order a minimum order, they would make amps for you. They tried things all over the place, and the amps vary.

You can basically divide it up into the "Postwar" square rounded box octal tube amps (the ones that look "retro" or whatever that is), followed by the 6v6 amps in the same cabs, to the more familiar rectangular cab with large white stripes, a stepdown control panel and 6v6, then the 6973 era, then white stripe but "normal" chassis cutout, the rhino hide era which has some changes - speakers went from rola to jensen somewhere in there, and finally the ending era with colored tolex. They did some earlier colored tolex, but most of the red, blue or black ones are '65-'68.

For the other brands, you find similar features and cosmetics but slightly different, and you can find circuit changes. I have a '63 Vega 16624 circuit that looks like a rhino hide amp, but it has a two tone blue tolex instead.

Carabinerx said:
I have a 1605r, the littlest Supro of the bunch! It’s a cool little amp, not my favorite but it’s fun to play with. Tons of reverb and the OD is great when maxed out. It can do all kinds of funky tricks with tons of ins and outs for just the reverbed signal, work as a slave, or to slave something else, and so on. Weird stuff but really versatile.

My only complaints are how underpowered it is for 5 Watts. I live in an apartment, never thought I’d have this issue with any tube amp being too quiet, my silver face vibrochamp started shaking things at 5, I have this dimed on the master and the gain on the verge of break up (because I actually like clean tones, too, go figure), and I just can’t get it loud enough. I changed the preamp tubes to OS Millard’s and run it through an old Jensen p12, which helped tame the flabby lows and...fairly sterile highs, this was mostly due to the 8” speaker it comes with. It’s not a particularly forgiving amp, no bloom or sag, but I think it’s SS rectifier so not too big a surprise there.

Loads of verb, loads of crunch. That just maybe what this amp is good for and leave it at that!
Click to expand...

I have the big brother Statesman head that can do a lot of the same tricks with the reverbed signal. You can get a really surfy sound out of it

Here's a quick video I made, in the room it was actually cleaner but I was blowing up the front end of my daughter's iPad that I was recording with.

Thanks man I appreciate the kind words. I do cherish that amp. I've got a couple pretty nice more modern amps but none have the mojo or sound of that Supro. Here's a shot from the back. 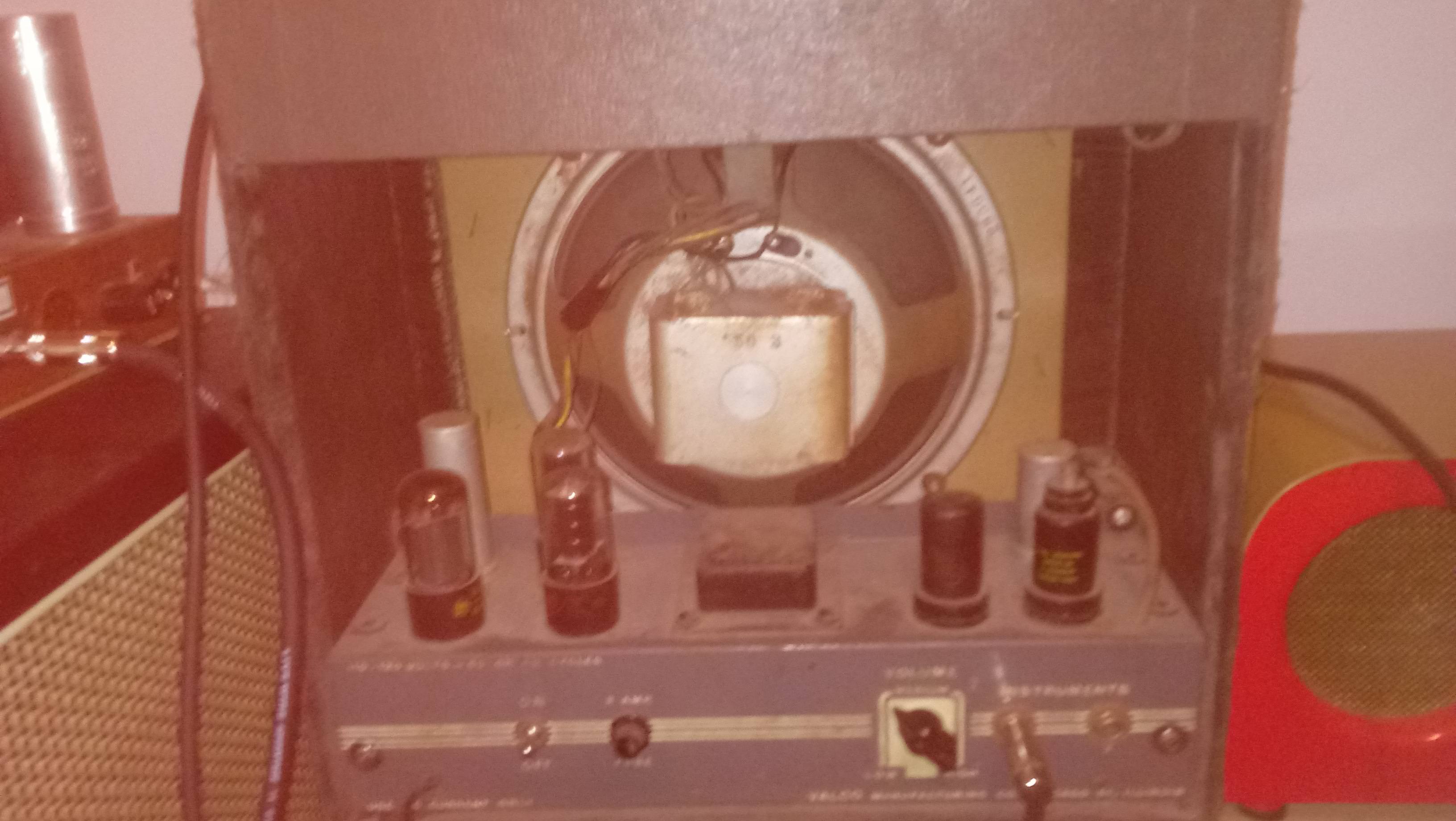 I'm a Vox and Hiwatt fan and have long preferred those type of clean sounds. A couple years ago, however, I got quite an itch to explore some different flavors, and bought a Dusky D20 head and Supro Thunderbolt+. I love clean headroom and the Thunderbolt+ actually has plenty, but I really dug the cranked sound. Great 'alternate' clean for me and the drive is just killer. Nice thump with that 15" speaker. Lots to explore on this amp with the hi and low inputs and 3 rectifier/wattage settings. The rectifier settings don't make a radical difference, mostly I hear more compression on the 35 watt tube rectifier setting and a stiff response on the 60 watt solid state setting.

A couple years ago I grabbed a Titan when Sweetwater was blowing them out/discontinuing them. For $800(ish) for a small 50 watt (!) tube combo with reverb and trem I couldn't resist. It's a different flavor from the Thunderbolt+, the drive is more chimey and less ragged, and it (obviously) has a different EQ profile partly due to the differences in cabinet and speaker. The hemp cone is interesting; the way it smooths drives is really wonderful but sometimes I miss the top end and the cut that brings. I'm not crazy about the reverb but it's usable for me at lower settings.

It looks like there is going to be a somewhat regular cycle of some models being discontinued and blown out. This Black Friday the regular Thunderbolt was going for $649. I'm glad some here are getting some great deals.
Last edited: Dec 3, 2018

Smashies said:
Word! So, on your amp, how are your channels and inputs labelled? It sounds like they're different from mine.

If you've got 4 input jacks, how are they labelled? You speak of "low/high"...is that referring to the two channels (with each channel having a "normal/regular" and a "mic" input)?

A visual would help if you get the chance. Thanks!
Click to expand...

I’m out of town for work for the next couple weeks, but yes, I will for sure elaborate with pics.

Does anyone have experience with the Keeley Supro? Looking at a new amp and this little guy seems to suit my needs well. How does it compare to similar amps in the new Supro lineup?

F.H. Bradley said:
Does anyone have experience with the Keeley Supro? Looking at a new amp and this little guy seems to suit my needs well. How does it compare to similar amps in the new Supro lineup?
Click to expand...

Don't have it so I can't answer. Hopefully someone will chime in.
You might want to review this thread...
https://www.thegearpage.net/board/index.php?threads/keeley-supro-is-now-available.1977459/

Gratuitous addition to this thread, but only because I got this new guitar to go with the Coronado clone: 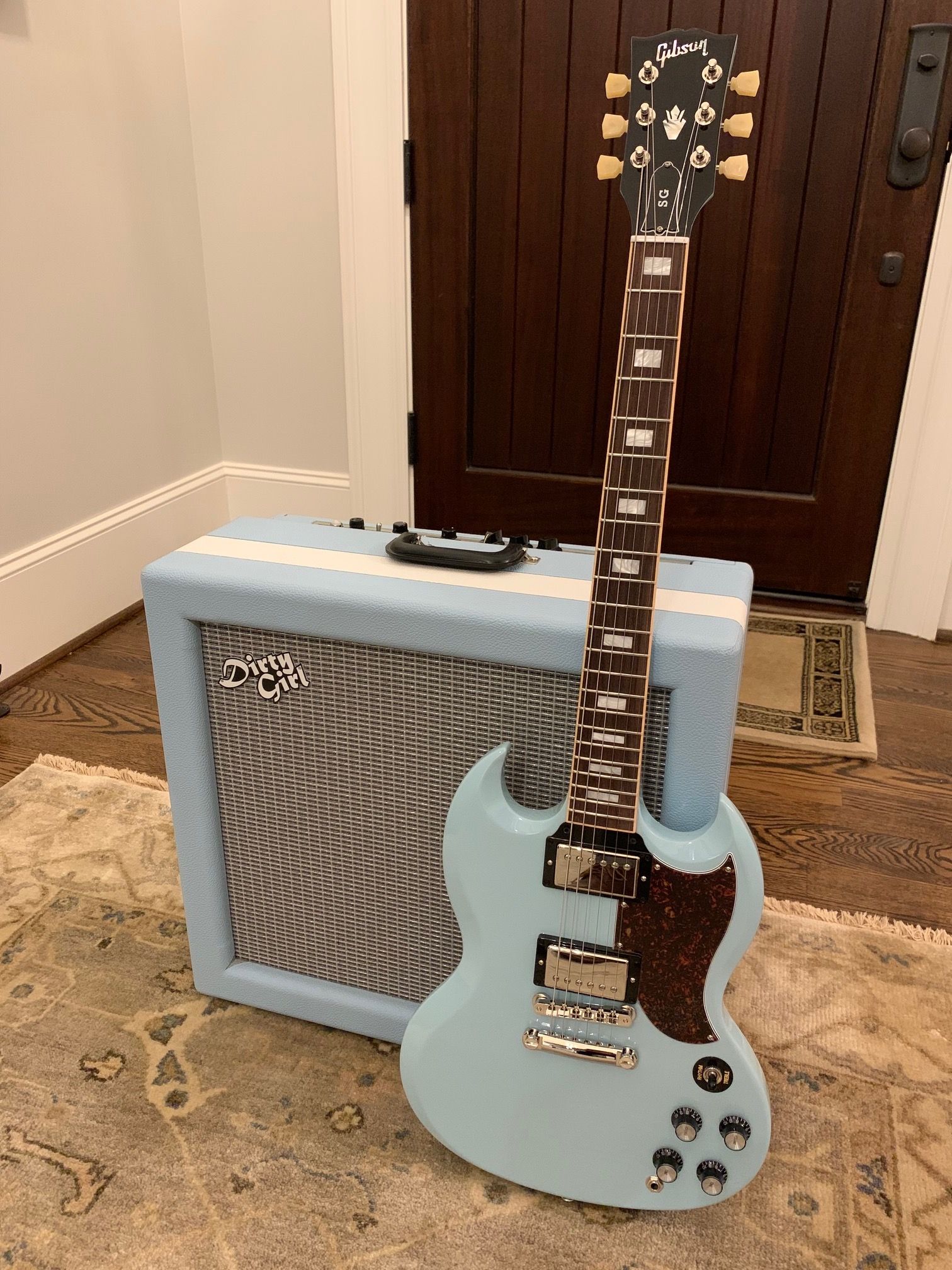 I'm starting to get a little worried about blowing the field coil speaker. Are there readily available new production field coils or am I stuck with the vintage market. If anyone has any idea what they go for that would be greatly appreciated also. I'm leaving it to you gurus nowso I can get schooled.
M

70' s Tone said:
I'm loving my Saturn Reverb.
It's a 15 watt tone monster.
The tube rectifier is what makes it so good. 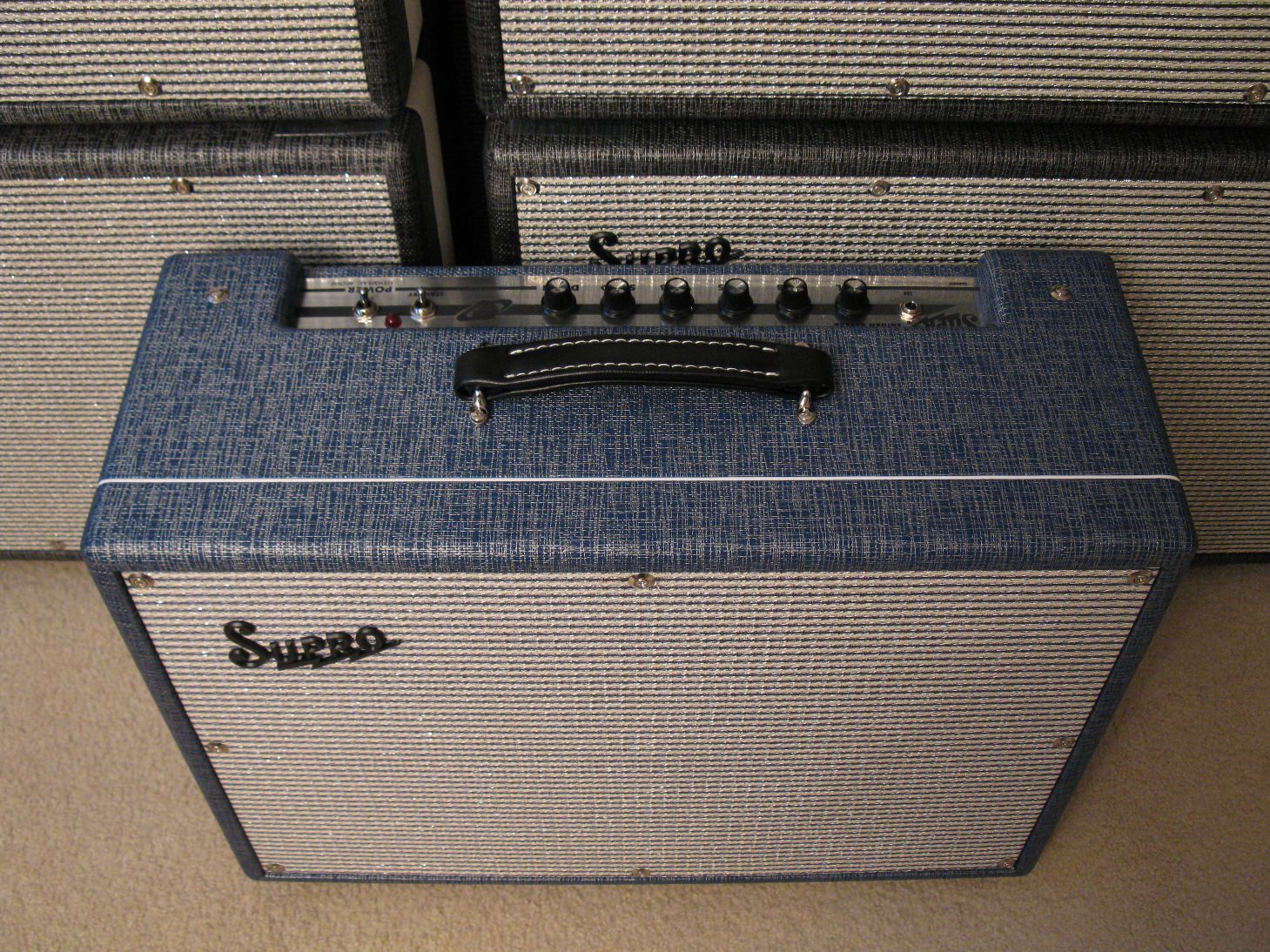 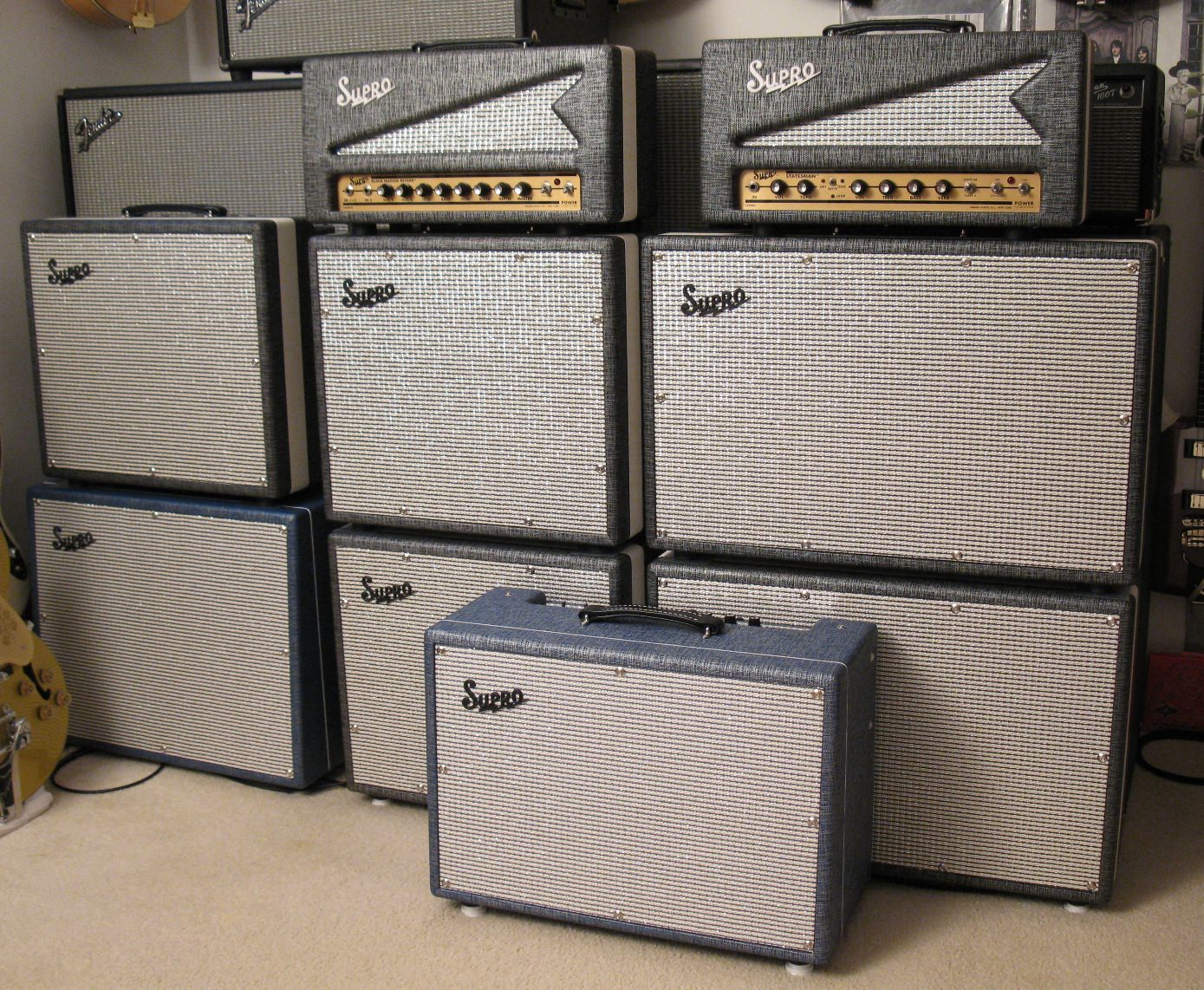 love mine.
don't be fooled by the 15w.. these things crank

Smashies said:
Gratuitous addition to this thread, but only because I got this new guitar to go with the Coronado clone:

Don't know if it gets much better than that!

Proud user of 64 and 65 Supro Big Stars plus a 1688t - 20years ago I asked a friend if he had a tremelo pedal I could use and he said he did not but brought over an old big star which I immediately bounded with - bought that one and have picked up a couple along the way ^!^

oansun said:
Looking to pair my Jupiter with something midrangey. I've gone through a few but am just not digging it so much, but the Jupiter sounds so heavenly. Then I thought, "well, another Supro"
So any advice on what could work?
Click to expand...

I have my eye on a Black Magick if some of my unused gear sells.

I just picked up this Jupiter from 2016 last week. Absolutely perfect for my band needs and it does not sound boxy or small. Really happy with this rig!

michael.e said:
I have my eye on a Black Magick if some of my unused gear sells.
Click to expand...

I went with a Suhr Bella, sounds awesome

oansun said:
I went with a Suhr Bella, sounds awesome
Click to expand...

I’d have liked an extra speaker port but there are other methods for that
Click to expand...

Yeah I have a Parallel splitter box if I do put this in to a head cab. But I’m liking this so much that I will probably leave well enough alone. I am having a hell of a time selling my KO 213 so I may just get a Supro cab for it.
You must log in or register to reply here.
Share:
Facebook Twitter Reddit Pinterest Tumblr WhatsApp Email Link