Hi. Wondering if anyone has thoughts and recommendations on a thinline hybrid acoustic for loud stage use. looking to get something to replace a traditional acoustic for feedback resistance on loud stage. Sub 2K.

1 Specific concern...I played one (not mentioning name) and I then I heard the same guitar played on stage by a good player. At loud volume (thru acoustic amp and FOH) I found it just seemed to pick up too much of the pick. It just had too much clack/pick noise. Was great with fingers but semi aggressive strum at higher volume yielded a lot of noise. (Couldn't be dialed out enough and wasn't due to player technique.)

I don't have much experience with thinlines but wondering about TA Crowdster or Taylor T5z specifically...open to other suggestions too of course...
Thanks in advance!

I really love my Rick Turner Renaissance RS6. Plays and sounds amazing. I think you may be able to find one for around $2K or under used.
U

Have you used it in a loud stage environment? Thanks!

I have two Michael Kelly Hybrids (one original and one special) and I love them. They have been my main gig guitars for the past five years or so because I play both acoustic and electric and it makes that all pretty easy and seamless. The acoustic sounds are good for full band stuff, especially if you use something to tame the piezo sound (I use a Fishman Aura or Zoom A3). The Hybrid Special has two humbuckers and a coil tap. I use a stereo guitar cable and send the acoustic signal one way and the electric another. You can blend and mix the sounds. 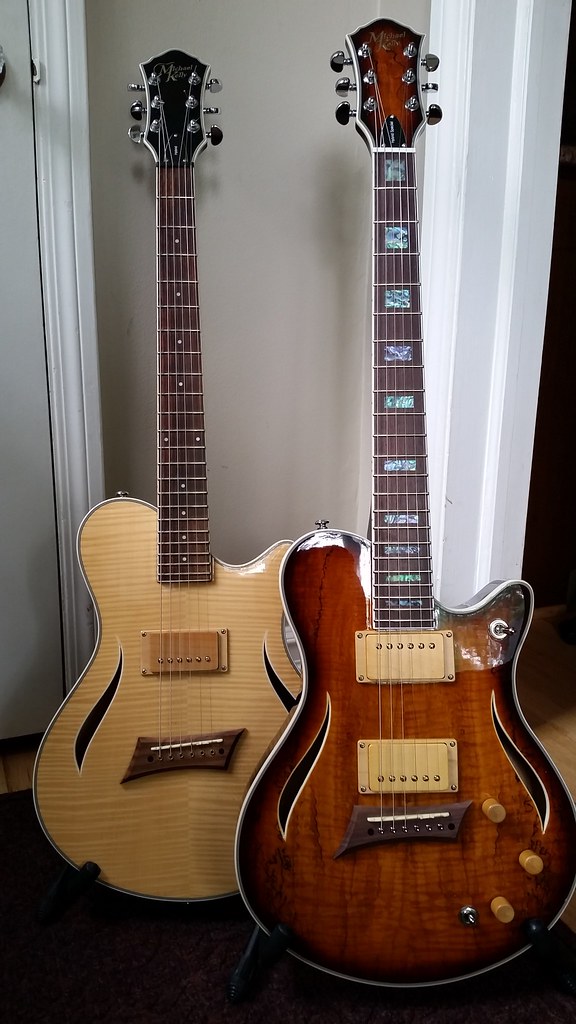 Very nice. Thank you for the info!

The Fender Acoustasonic has to be on the list. Even if you don't pick it, it's a strong, viable contender. Epiphone SST Coupe would save on the budget, also a strong contender. The Godin A6 would definitely fit the bill.
U

The Fender Acoustasonic sends out a mono signal--so you are more limited by how you can mix the two signals. There are a couple of longish threads on this model.

Love my T5z. Loud volumes have never been a problem. Better acoustic sounds through a good acoustic amp, but I also play it through my Marshall at times. I use a TC Electronics BodyRez pedal to enhance the acoustic sound, and an EQ pedal for certain electric sounds. It can do anything, after you get comfortable with the controls. I use electric strings (10s), and it plays as well as a good Les Paul. I did need to change neck angle to get the action as low as I wanted, but it’s simple with the neck attachment system. The neck is near perfect, with excellent fret work. It’s a real pleasure to play, and extremely versatile. For me, it’s turned out to be a definite keeper.

@Rod - I think the Chaquico Carvin is a nice guitar, but it's not a hybrid, is it?

lp_bruce said:
@Rod - I think the Chaquico Carvin is a nice guitar, but it's not a hybrid, is it?
Click to expand...

I’ve played my T5z on loud stages without having issues. I typically run it through a Boss AD-10 or a Line 6 HXFX with an acoustic IR loaded. That makes the sound more realistic.
D

Hamer Duotone. Not as "uptown" as some of the other options but, less than half your budget and it works perfectly for what you are after. I used in a reasonably loud band for a number of years to do exactly what you are talking about.

Separate volume control and on board EQ for the acoustic side. Run the piezo through an acoustic DI and you are golden. Wonderful guitar for this purpose.

I use the Anderson Crowdster (one plus and one 2+).

I am certainly biased, but have tried almost every hybrid out there and there is no equal to the Crowdster. Again...my opinion.

I find if you run the volume at noon or so, run it through a preamp with a compressor, adjust the volume at the PA, and use a slightly thinner pick (less than 1mm) you should be fine.

I like using coated strings, so I believe that helps as well.

Make sure you look at what you want to do with a hybrid, as some only run either acoustic OR electric, like the Taylor and new Fender Acoustasonic. Some have dual jacks for running separate, the Godin and The Hamer Duotone and some run a stereo or TRS out, which you can run a Y cable for the two sides, or I run a TRS cable into a splitter to separate the acoustic and electric and run them both at the same time.

@teletaylor - Definitely agree with considering what you're really looking to get out of a hybrid, how you will amplify it, etc. Because that all matters a lot and not all hybrids function the same or excel at the same things. For me, a hybrid needs to have a stereo output because of the way I amplify both signals and how I use them. For others, that might not matter much.

I really ended up with my first MK Hybrid because one happened to be available. I liked the idea of a hybrid guitar because in every band I play in I switch back and forth between acoustic and electric a fair bit. But they aren't common to find in the stores, even a place like Detroit with a lot of good music stores. I ended up buying one off CL and really loving the functionality.

I wanted another hybrid, hopefully with more electric versatility because the original MK Hybrid has one electric pickup with no tone controls. I was patient and got to try several out, including a Parkwood, Schecter, Crafter, and Taylor T5. And they were all nice enough guitars, but none of them really blew me away. I ended up with the newer MK Hybrid special, which is much more versatile on the electric side and still sounds good acoustic.

But that's me. There are a lot of good options out there now. I never had a chance to play the Crowdster or a Hamer Duo, though I've heard good things. I was pretty disappointed in the T5. I own a couple of Taylor acoustics and had high expectations. But it didn't really stand out at anything (to me). I played a gig with a local singer/songwriter last weekend and she uses a T5. And.... I thought my MK sounded much better acoustically (she only used it for acoustic) and I know it's better and more versatile on the electric side.

Just another suggestion, Yamaha made an AEX500 for a couple of years in the late 90s. Piezo with 3 band eq, 1 mini humbucker with a vol control and a blend control. The piezo is stringy sounding, but by blending some of the humbucker it gets warmer. They are semi hollow, so they can get loud. They usually go for around $500.
You must log in or register to reply here.
Share:
Facebook Twitter Reddit Pinterest Tumblr WhatsApp Email Link