How would you describe the differnce in tone?

Any preference, and why?
B

The sa 2200 is a brighter guitar with more snap due to the ebony board and probably sounds like a 355 more then a 335 . The build quality on mine was better then the Gibsons I've had . The coil taps are fantastic. I actually preferred the sound of the Yamaha to the 335 but found the frets a little too low , that guitar would actually hurt my hand after extended playing with lots of bends. I'm not sure if it was the lower frets, board radius, or neck profile . That's the only reason I got rid of mine.
K

Any preference for either tone?
K

Is the ebony board the only thing acounting for the tone difference?

In general a Gibson will have more low mids compared to the Yammie. I was checking out an SA2000 back in the day, when I came across an 66 ES345. I was able to try them both on a gig. Onstage the Yamaha was clearer sounding to me, but friends in the back of the hall said that the Gibson cut through much, much better.
It was then that I started to catch on to the fact that a bit of ugly in your tone helps it cut through the band.
B

I actually preferred the yamaha for tone . Could get a real nice later Freddy king / BB king tone . Clear is a good description . The pickups were great pickups . It may be a little bright for some people though. I played through a fender twin and had to bump up the bass on the amp and lower the tone on the Sa2200
K

I like the neck pup, very clear and articulate. The bridge pup is very brigt though..makes an already bright guitar piercing.

I wonder a little if I should have gonne for a es335 instead.

Bluesdaddy said:
The sa 2200 is a brighter guitar with more snap due to the ebony board and probably sounds like a 355 more then a 335 . The build quality on mine was better then the Gibsons I've had . The coil taps are fantastic. I actually preferred the sound of the Yamaha to the 335 but found the frets a little too low , that guitar would actually hurt my hand after extended playing with lots of bends. I'm not sure if it was the lower frets, board radius, or neck profile . That's the only reason I got rid of mine.
Click to expand...

This is pretty much my experience as well (except I don't know what "sounds more like a 335 than a 335" means).

I thought the Yammy was a great guitar, and in many ways the superior model in that 'line' of guitars, except that finally just couldn't live with the thinner neck, from a comfort factor. (I don't know whether the neck carves vary or not; mine was too thin for me, and I was already moving toward fatter necks on my guitars anyway.)
I loved the coil-tap feature, which gave the guitar a nice "snappy' option, but at the same time, I have Strats on the rack for that.
I had played a 335 for several years in the 70's, then went the usual LP/strat/Tele route for the next several decades. I finally decided to "recheck" the Gibbies, so see if I'd forgotten or missed something over the years, got a '59 CS Anniversary 335, and haven't looked back.
If you read the multitude of '335 threads' around here, there's a consensus that you have to try several, but when you do, "The One' is really special. I subscribe to that, because I test drove maybe 30 of them before I bought the one I did.

A lot of guys' "tone center" is locked in the past, and I freely admit to that. It's not a matter of which model of guitar here is "better': it's more a matter of whether you know what you are going for.

I had one for a while, and it was a GREAT guitar. The only reason that I sold it was to pay for my Collings I35LC. The SA2200 really should be compared more to a 355, because that's what it is mostly related to. The ebony gives it a snappier attack, with a little more clarity. The neck is pretty flat, something that bothered me a little, but not too much. The build quality is excellent, among the best out there. Considering what these sell for used, its an excellent bargain.

my experience with both guitars has been this : looking for an alternative for my '63 ES-345 (which i've had since 1982) i tried everything in the semi-hollow vein i could get my hands on so the Yamaha was a contender. i had one with a spruce top/ebony board and also the SA2000 model. both didn't last long because they were too heavy for my taste and the tone went too far into the solid-body camp. i much prefer a woody tone. if i want more cut i kick in some stomp box or tweak the amp real quick. an Ibanez AS50 was really nice as was an Ibanez AM50 (the smaller version). then i found a great '68 ES-345 that i will also keep but in the end i decided to get a custom-built guitar so i can retire the vintage pieces. it's much more expensive of course but since i use these guitars professionally i can justify the expense - or the investment if you prefer that term.
so in the end it's your tonal preference. IMHO the two (ES-335 vs. SA2000) do not really compare that well. one can do this trick, the other not and vice versa....

There are so many 335's out there that you can find one that's "just right" if you have opportunity and time. There are a lot of dog 335's, but some 335's are truly sublime.

I had to order blind, so I went with my trust in Yamaha's QC.
K

Yeah, I´m thinking the snappines and brightness in mine might be a bit too much for me. Can I get it to sound more woody and 335-ish?

the basic tone lies in the wood and the construction details of the guitar so i doubt that you could drastically alter that .... you might get some advice from experienced pickup-winders like Lollar or Fralin- they could suggest some pickups that could alleviate some of the brightness etc. but don't give up too soon : there is always the tone-control pot !

Alister said:
This is pretty much my experience as well (except I don't know what "sounds more like a 335 than a 335" means).
Click to expand...

No experience with SA2200, but I had the SA2000 back in the 80's. It was a finely made guitar. For several years that's what I gigged on. I found it to be cold. Eventually, I switched to a Tele.

I had a 2200 for a while, too bright and snappy for me and the fretboard radius was, to my fingers, too flat and uncomfortable. They might be 14" fretboards? Great guitar though in fit and finish, overall build quality with a beautiful tobacco sunburst on tiger-striped maple.
After shopping around I found a semi much closer to the tone I had in mind andI prefer the darker, 'woodier' tone of my SoCo 16LC.
K

Anyone who prefers the tone of the SA2200 and would like to tell why and make me feel good?

Yamaha SA2000 Before new hardware and Bare Knuckle Pickups
Push pull Coil tapped BK stormy mondays with the maple wood pup rings were also done on mine. CLick the above pic for a clip and 2 more clips below.

Tell Me a Bedtime Story 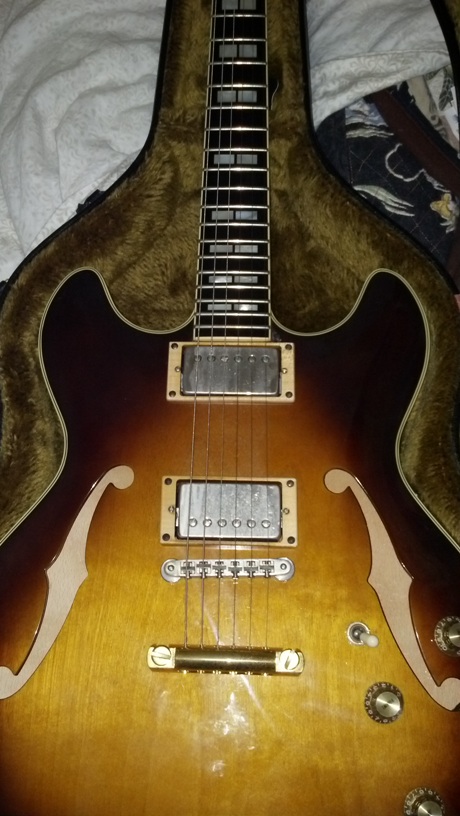 Kzin said:
Anyone who prefers the tone of the SA2200 and would like to tell why and make me feel good?
Click to expand...

I prefer it, for what it's worth, to the 335s I've tried, because of it being bright and snappy (as a previous poster wrote). YMMV. Much more lively too than the SG1000 I tried at the same store. The 335s seemed murky to me.
B

I preferred the tone , bright and snappy can always be brought down when needed more so then trying to brighten a muddy guitar . A brighter guitar can help you stand out in a band situation. I usually live on the middle section on 335 type guitars .... So in the SA2200 case I would add less bridge pickup then neck pickup. If I had the Playability if my 335 and the sound of the SA2200 I'd be a happy boy.
You must log in or register to reply here.
Share:
Facebook Twitter Reddit Pinterest Tumblr WhatsApp Email Link