I'm looking to reduce the amount of stuff I have to carry for gigging.

I have an upcoming gig for a wedding in the middle of a forest which is not very easy to get to!

One of my ideas is to build a dummy load with a line-out that I can plug my old 15w amp head (selmer bassist major) then send a line-out to the PA mixer.

Obviously the interaction between amp and speaker is essential to the sound; but has anyone had any success with a setup like this?

Another option would be to bring a smaller 5w combo amp that I can mic and send to the PA. However, I am much more partial to my larger 15w head, which itself is smaller and easier to carry than the combo amp if only I didn't have to lug a 1x12 cab along with it!

Is this a road worth going down?

Not without speaker simulation somewhere in the chain
S

You are going to want some type of cab/speaker emulation in the path.

By the way, your link looks like it goes to an impedance matcher, not a load box. I don't see how that will work. Doesn't look like the right piece of gear to me.

You want a " load box". I think you want to reduce your level to "line" level for the PA. It is not just an issue of matching impedance. I.e. Going from a 16 ohm output yo a 4 ohm cab. You actually need to dissipate power.

( edit: I see there is actually a line out on this, in addition to the impedance match. That said, the next issue is the quality of the "load" and how it will effect your sound. At this price, it is probably a "resistive" load and not a "reactive" load. It will work physically, but sound/ feel may work for you, it may not.).

( edit 2: I don't know what is in that box. Looks like a transformer and some type of resistor network. It would be interesting to know how well it works since it is much cheaper than the solutions most people seem to be happy with. I think most reactive load boxes are usually a few hundred dollars. )
Last edited: Apr 3, 2016
B

Thankyou for the advice.

Will look into speaker emulation devices. It is a completely passive system with a transformer and resistor network. It comes as a very simple kit.

So is an emulator an active device that will simply cut/boost certain frequencies that an actual speaker would?
S

Here is my two cents. I am not a professional doing this for a living but this is my understanding to get you started. ( I do not use "real" amps anymore.)

Your amp is putting out power at 15w and is looking for something like an 8 ohm load.( aka the speaker). Instead, you plug your amp into something ("load") and that will reduce the power and signal level so that you can feed into a device expecting a "line" level signal. However a this point you have removed the speaker and cab which is a BIG part of the sound you are getting. So instead now feed that line level signal into another device (sort of like a known EQ, actually an "Impulse Response" before you go into the PA. ( which is suppose to be neutral sounding). But there are other technologies also to get the tone of the speaker/cab.

First problem is that the load will change the feel and tone of the amp. Different devices/technologies have different advantages/disadvantages. Looks like what you have chosen is the most economical. Next is how you then emulate the speaker/cab. Some devices are an all in one solution such as the Mesa CloneCab but that is specific to providing a Mesa sounding cab. Others like Two Notes allow you input a wide variety of speakers/cabs, both that come with the device and that are user supplied/3rd party.

It could be that once you explore the cost of a higher end load box, you might choose not to use your current amp at all and just bypass it entirely. I don't think it is cheap to get great results trying to maintain the character of your current amp. ( This is just what I have read.)

Although many devices use digital technology for the emulation, there are also some that use analog technology. I think the Tech21 character pedals might be a cheaper way to go but it will mean not being able to use your own amp. You can also use something with a real tube in it such as the Blackstar HT-dual. It has both an emulated and non emulated output.

Alternatives you could just going into a small digital modeler like the Zoom MS-50G ( which I chose as an example because I think it is one of the lowest priced.)

Like everything else with gear today, the sky's the limit.
Last edited: Apr 3, 2016

Tone is in the Ears

Here you go - a speaker and mic simulator box just for this purpose: 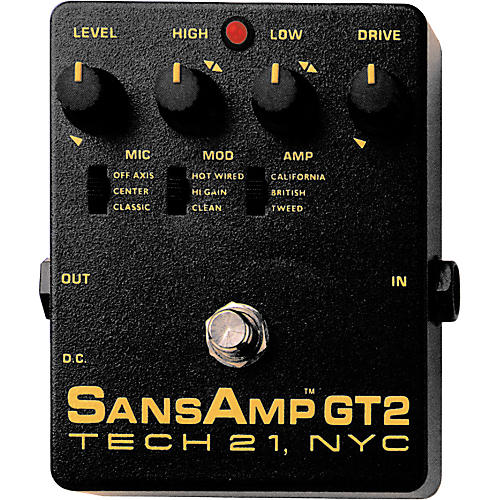 I think Radial also makes something that provides a load as well.
M

Bigyouth said:
Thankyou for the advice.

Will look into speaker emulation devices. It is a completely passive system with a transformer and resistor network. It comes as a very simple kit.

So is an emulator an active device that will simply cut/boost certain frequencies that an actual speaker would?
Click to expand...

Are you familiar with impulse responses?

If you really want to use your tube head just get an EPSI C. It's an amazing box. Keep in mind the cabinet impulse responses that come with it arent that great, but get on ownhammer.com and pick your favorites and load them on the box. I use it live with the newest V30 set from ownhammer and it sounds better than micing up the cab with a 57 on stage. You will still need the load box.

To use this set up it would go like this:

It is a big investment, but it really works a treat.

You could do something as simple as an H&K red box, which is what you describes above.....an EQ filter that sounds similar to a guitar cabinet. It's nowhere near as realistic as impulse responses, but it does work reasonably well in a pinch. You can also get them almost anywhere.

FWIW I have the behringer GI100, which is their copy of the red box, and it sounds just as good as the red box to me. Still needs a little EQ at the board, but it is usable.


Those newish tech21 character pedals are pretty good as well when run direct. You have options!

EDIT: None of the options I described have a load box so you will still need one. You probably got that just wanted to be explicit about it.

Not that I actually use it live but a dummy load and a Palmer PDI-09 gives a great result. Building a loadbox is dead simple and very useful to have around.

Motterpaul said:
Here you go - a speaker and mic simulator box just for this purpose:

this is an "entire amp chain" simulator box, you don't run an amp into it.

I use this. Pedals into Rock Bug into PA.. Done. Few weeks ago I played my first gig with a stereo rig.
One amp went into a cab, other went into Koch Loadbox II. It has outputs for recording/PA (speaker simulation). Works fine.
You must log in or register to reply here.
Share:
Facebook Twitter Reddit Pinterest Tumblr WhatsApp Email Link