I really wanted a '57 Deluxe Reissue, but the price just turns me off specially today's prices. I'm thinking of going for cheaper route. Any good clones? Or Maybe building and getting a kit? Are the kits good? Any input would be appreciated.

Lil Dawg - I've got multiple builds of his,.. I love everyone of them!
Killer prices as well.

DStefani said:
Lil Dawg - I've got multiple builds of his,.. I love everyone of them!
Killer prices as well.


\
A huuuuuge +1 for Jim at Lil dawg. His customer service is stellar.
His amps are great to say the least.
I had the DLux and it was incredibly well built and sounded awesome. I had NOS tubes and a Weber in it too.

Here are some pics of their work:

This has proven to be pretty killer: 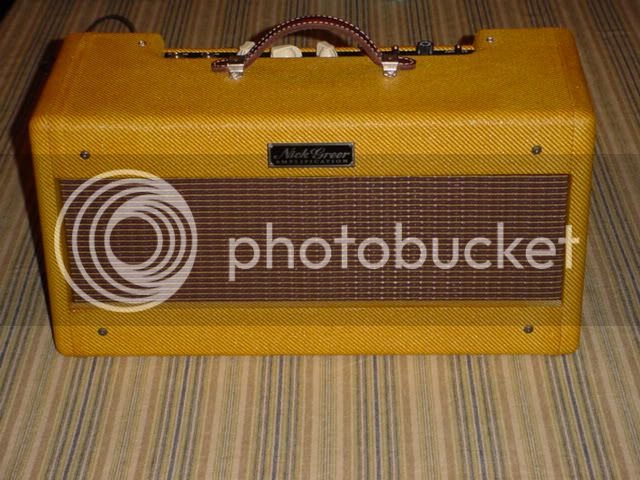 Thanks for the links guys. Keep 'em coming!

Btw, how do you guys compare these clones to the '57 Fender Reissue?

I played one for a while at the music store where I do they're web work, they sound good enough, but the build looked kind of weak. The tweed color was just OK. I'd take my Lil Dawg over it in a heart beat and for about half the price.

I posted the pics of the better built cabinets, because the are killers.
The deep 5E3 cab is one inch deeper than a traditional deluxe cab which makes it easy to use a speaker that might be deeper or to try out a larger power tube.

I had a Clarke Beaufort for a while with a Celestion Blue in it, Mike said that I could try out 6L6's is I wanted to, but with that speaker I could just barely get them in there.

With the deep deluxe cabinet, I can fit a tone tubby or an EV in them and still use any tube I want.

I know that a number of builder use better built cabinets, but not all of them mention it.

Her DStef--what are those 2 great looking tweeds? 2 of the same or variety?

I built my own Deluxe, and not from a kit. Time-consuming to source all the parts, for sure, but I'd do it again in a heartbeat!

The first 5E3 I had Jim at Lil Dawg build me was a 35 watt, it sounded amazing but WAY too loud.

So I sent it back to him and he took it down to 25 and did the mods.
Both are very, very nice amps. With the TT, the 12 watt is a screamer when really pushed with my R7.

I've also got an 18 watt build and 2 different 15 watt champs of his. One is a brand new build, a 15 watt champ output with a 5E3 front end. A Class-A deluxe! I had him do it as a head so I could keep an iso-cab stored and control the amp outside. I've only had it about a week but so far it's great. My 15 watt 1x12 champ with a better built cab is in the emporium. ;-)

Getting to know Jim has been fun to say the least!

My buddy, Paul, bought a tweed Deluxe clone off of ebay from Michael Clark. It sounds like a million bucks but has always has this whine (as well as a bunch of other fun noises) that just won't quit. We've changed all of the tubes a few times and had it to a tech who changed all of the Zoso caps (that were crap) and, just when it seemed like all was over, the damn thing started whining again. This was all on Paul's dime, btw. So, I guess what I'm getting at is, there's more to building an amp than just getting a bunch of parts and slapping them together. It might be worth it to pay a little extra to get a careful build. Maybe look for a used Victoria?
G

Boy, DStef, you are deep in tweed. You got my interest in lil'dawg piqued.

I also have a student who is looking at DRRI, maybe with some mods, but I'll show her these.

I'm very happy with my Victoria.
You can find them in like new condition used for a good price.

Consider talking to Barry Witt at Corona Ampworks in SoCal:

gsf said:
Boy, DStef, you are deep in tweed. You got my interest in lil'dawg piqued.

I also have a student who is looking at DRRI, maybe with some mods, but I'll show her these.
Click to expand...

Yea, I just wish it hadn't taken me so long to find out about them. I started playing in 1968, I could probably be playing originals now!

They're amazing things, it's like the roots of guitar amps.

I'm more into the smaller ones now, because of the tone, less weight and the fact that my right ear is still ringing at 5:00AM from my Super Reverb yesterday afternoon.

Something I love about tweeds is how the let you hear EVERYTHING about your signal chain.

I use 99% NOS tubes, and I've settled on EV's and Tone Tubby's as my speakers of choice.

If I had the cash, I'd probably own at least 3 or 4 more different ones.

If you want a 5E3 with some updated looks, check out Schreyer Audio Sage 14, I gig the snot out of the amp...