james... said:
I agree with everyone responding that this is not just a pedalboard issue. It's widespread across multiple cultures.
Click to expand...

While social media can be used for many amazing things, the show off element and the fake amazing life everybody seems to live (as portrayed on IG) have taken over.

It’s not like guitar culture hasn’t lived in trendy gear. It’s alright man, small companies are making money and you can play whatever you want

KoskineN said:
Well, isn't it the same thing around here? We have a pedalboards and rigs threads which are all about showing off your stuff. Not a lot of people actually do real demos
showing off the fonctions(including myself)...of course this is a forum, and discussions are easier here, but still, we all love to show off
Click to expand...

I’m proud of my pedalboard and I will post it when it changes. I like to think, however, that we are here to help each other and build conversations. We share a passion for gear and while the strymons and similar are pervasive, there are also threads and pride regarding $50 pedal gems.

Man, this resonates with me 1000% as somebody who's into both guitar gear and fashion. The flat layouts of Viberg and Rogue Territory clothes are basically the same thing as the Strymon/Vertex/other trendy pedal worship guitarist pedalboards all over Instagram. They're both large communities into niche expensive hobbies but there's remarkably little diversity in either, everybody seems to be doing the exact same thing.

I quit chasing the platonic ideal pedalboard, sold all my stuff, and got a Helix. I'm actually way happier now and feel like I can do far more for far less money. I like seeing interesting or different pedalboards, but I've seen enough Strymon Big Sky and Timeline, JHS Morning Glory, and Elliott/Veritas posts to last me a lifetime. I don't understand the appeal of trying to sound just like everyone else, why not pursue your own sound?
Z

Man, I was just looking through IG and had the exact same thought. I post and look on Instagram in order to get new ideas for my pedalboard, which means looking for those pedals that not tons of people use, but still sound great! It’s really annoying seeing the same exact CBA & Strymon pedals in as little space as possible. Granted, they are some of the best pedals out there, but they are expensive - at least to me. I want to see similar budgeted boards to mine that other musicians have put together and get really good tones out of.

You look at any era and I think there has always been a segment of the music community that is in it more for the fashion, and cool factor, and because they want to be part of something. There were some great great band in the 60’s, but there was also a lot of horrible flower power hippie bands that were in it for the look and to be part of the current trend, not so much for the music. Same with a portion of the “punk” scene in the late 70s. 80s hair bands….are you kidding me?!? Many of the bands and the fans were in it for the fashion and lifestyle more than anything else. Grunge in the 90s, there were some very good band (IMO), there was also a lot of people that jumped on the band wagon because it was the cool thing to do at the time and cause record companies were looking to sign bands with that sound. I look at the intragram “look at all pictures of my immaculately maintained and extremely expensive gear set up” crowd as an extension of that same mindset. Many of them appear to be in it because it is currently a cool and fashionable vehicle to be part of and show off in, and that seems to be the priority over actually making music, writing songs, becoming a better player, ect. But what’s new? These types of people have always been around the music community, and will always be around, so I tend to just ignore that whole trend and do my thing and let them do theirs.
Last edited: Apr 17, 2018

Not only pedalboards but any other field of human endeavor.

Instagram is all smoke and mirrors and ruins everything.

"When I go online, all these kettles are just showing off their pretty gear and making an emphasis on it looking good, am I right?"

-The Pot, posted on The Pot Page

I am rocking at least 1 behringer and some other shenzhen specials, with shag carpet. Perhaps I should sign up for instagram.
B

not totally sure how the instagram pedalboard fad is really any different from the "show your pedalboard" threads here with 587305732498714738 posts.

other than the fact... you know... they're on instagram and not TGP.

panther_king said:
"When I go online, all these kettles are just showing off their pretty gear and making an emphasis on it looking good, am I right?"

-The Pot, posted on The Pot Page
Click to expand...

I mean, imagine that.. A social media platform built around photos is filled with pretty photos. The absolute nerve! 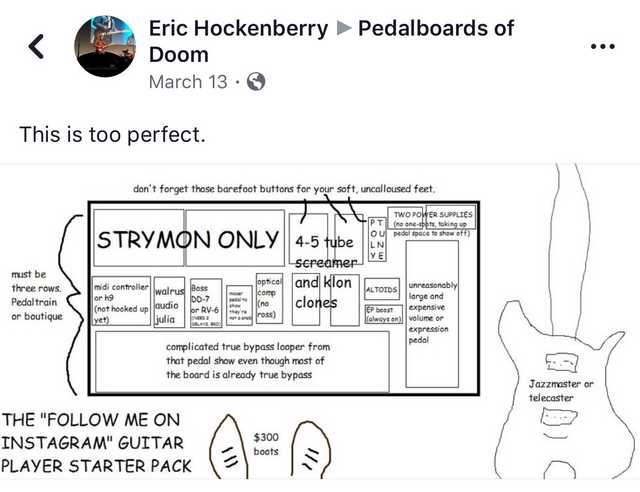 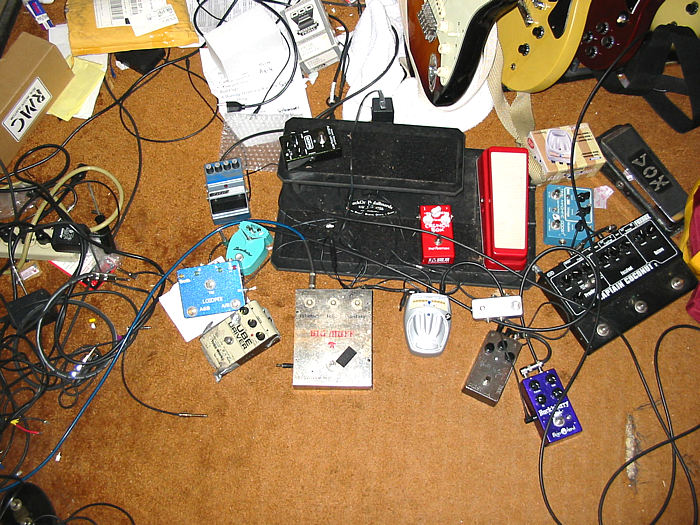 You're right OP, the damage has been done. Too many perfectly paired Strymon's and Chase Bliss pedals, too much orderly wiring and woodgrain, too many hipsters arranging pedals with NO regard to whether they would even be able to nail Whitesnake or REO Speedwagon tones. And look what's happened as a result! Gibson's going bankrupt, Guitar Center is in serious trouble, PRS is making strat copies and Joe B told us all that we shouldn't even use pedals anymore. You know, back on harmony central, we used to do our own thing man. I mean sure, we all had the same pair of tan pants and the same tweed amp clones and the same boutique '59 LP copies, but we posted pictures of them on weathered, suburban decks like real guitarists. None of this urban, mid-century woodgrain ****. It's all ****in done man, ITS OVER!!

I see what op is saying,

However, I like looking at pretty pictures of pedals, and I don’t really care how well it works for the person who posted it.

I’d rather have pictures of poseur boards than no pictures at all.
M

I mean you’re basically just describing Instagram as a platform.