Update: Amp buying dilemma, what would you do?

awp said:
Are the two whites an exact match? Having mismatched whites would drive me more crazy than black and white
Click to expand...

Funny you should mention that. I have one of these to go along with it.

ToneLover, I would imagine that you could find vinyl sick on dots that would be removable and therefor would not compromise resale value.

If the white isn't the exact same shade and doesn't decompose at the same rate, it'll make you crazy. Not an issue with the b/w setup, and probably not with the dual black, either.
Last edited: Sep 24, 2021

May you find a path forward.

I think black/white could look great together.

And I HATE zebra humbuckers, so when I say the amp and cabinet could look great, I'm not saying that lightly.

Tonelover said:
Coming from the perspective of someone who is usually a cheap ass but also with OCD cork sniffing tendencies regarding my gear.
Click to expand...

The OCD cork sniffing wins. I'd spend the extra $500 on the white version.

I think you need to consider here "will I always be left wondering 'what if' if I don't buy the more expensive white one".

Personally I can't see myself buying another black tolex amp ever again. They just look so pedestrian.

Here is The Answer :

A little update, here's what I went with. In the end I decided that the extra expense for the head was more than offset by not having to replace the cabinet and I do like the white look anyway. It proves how much cooler I am than everyone with black amps.

I've had one "lunchbox" amp in the past, a Baron Custom Amps (great amps) 5 watter but promptly sold it because it just didn't have what I liked in their bigger amps. I'm very new to the Mesa line having bought a JP-2C earlier in the year which I enjoy. One characteristic I really like in amps is that palm muting crunch and these Mesas have it in spades. Perhaps that's the reason I'm falling in love with them so quickly.

I spent only a quick 15 minutes with it running through the settings briefly, you know, just to see what it sounds like and make sure it works. I was concerned that it might sound like a little toy but my first impressions are that this thing is pretty killer for a small amp. It actually doesn't sound a lot different than my JP-2C overall to tell the truth. It's plenty loud and delivers lots of thump, sustain and searing gain. I see what people mean about to volume jump from clean to crunch and yes, it would be nice to be foots witchable between the two but that's not a deal breaker for me. I can get all the crunch I want on the other channel. It's amazing what a difference the EQ when engaged makes to these amps as well.

So all in all it was a little pricey but I think it will be worth it as I don't see myself changing it out for something else any time soon. Thanks to all for the earlier discussion.

Probably the right move. I love my Marshall 2061cx cabinet but I’m selling it tomorrow. I got a 5150 iii head in ivory, and while this looks cool: 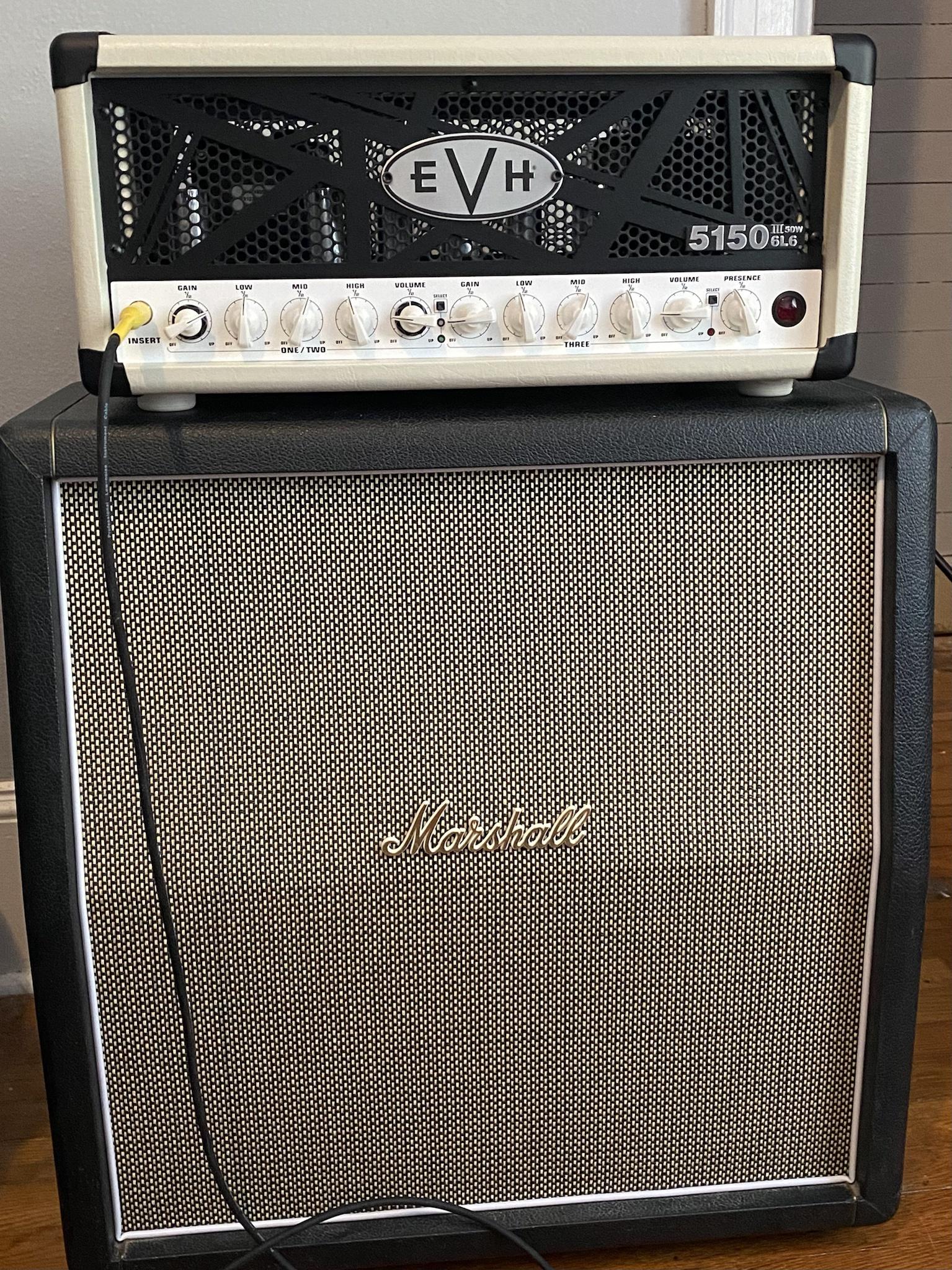 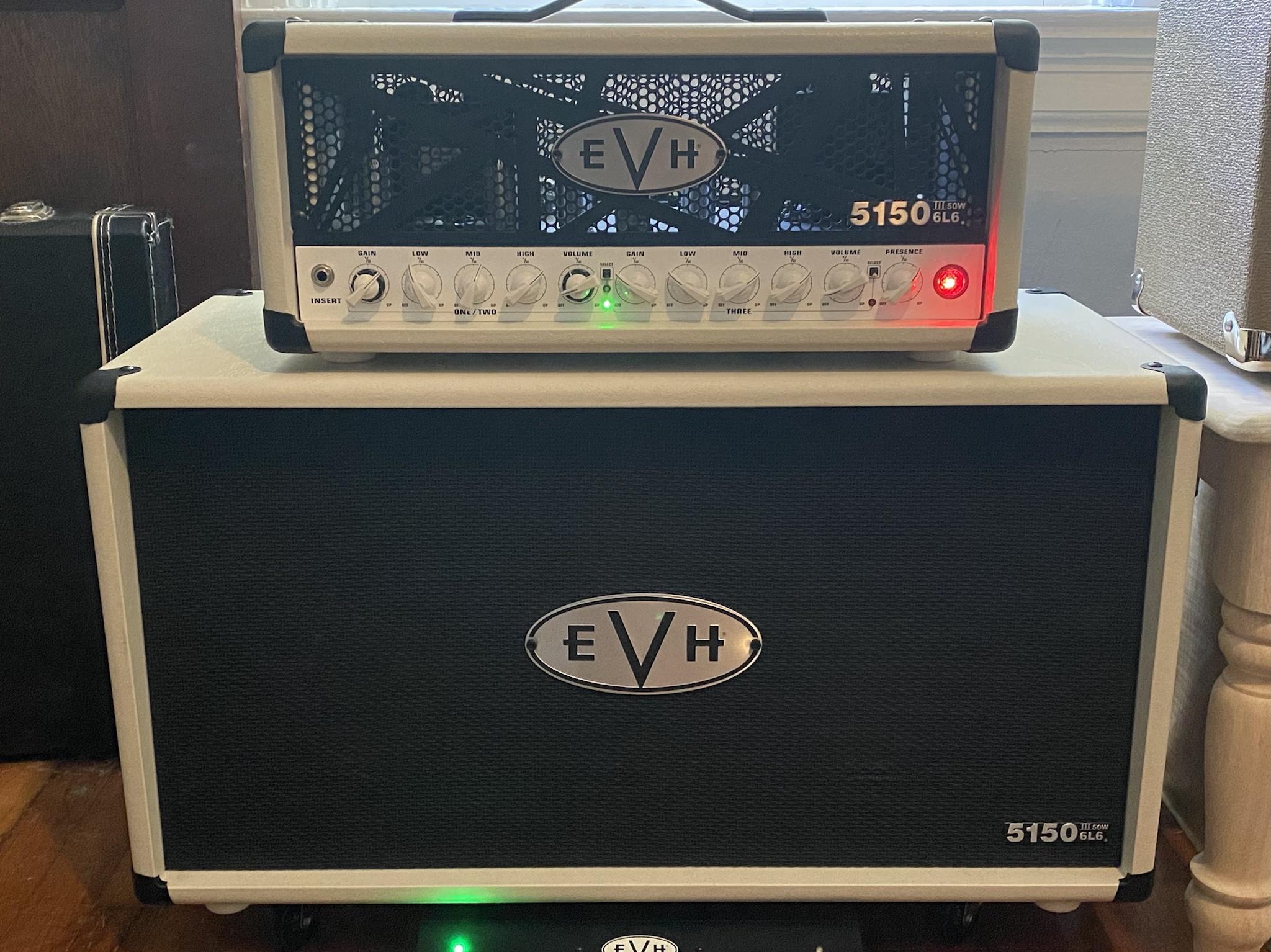 In my case it was roughly even money to sell my cab and buy this one, and it won’t bug me down the road. Plus both cabs use the same speakers so there’s no real difference in tone between them.

You did the right thing. Buy once, cry once.

Tonelover said:
I haven't decided on anything but my heart wants the white/white.
Click to expand...