Weight is pretty important to some folks

Some years ago I stumbled on a pile of ash Tele bodies at a good price. They ranged from about 4 1/2 pounds to over 5 pounds. Not the sort of thing I want to invest too many hours in. But I don't like to throw anything away, so they slept in the attic until I had nothing to do. Nothing except getting covered in sawdust! Now that is a good time! Whoa! 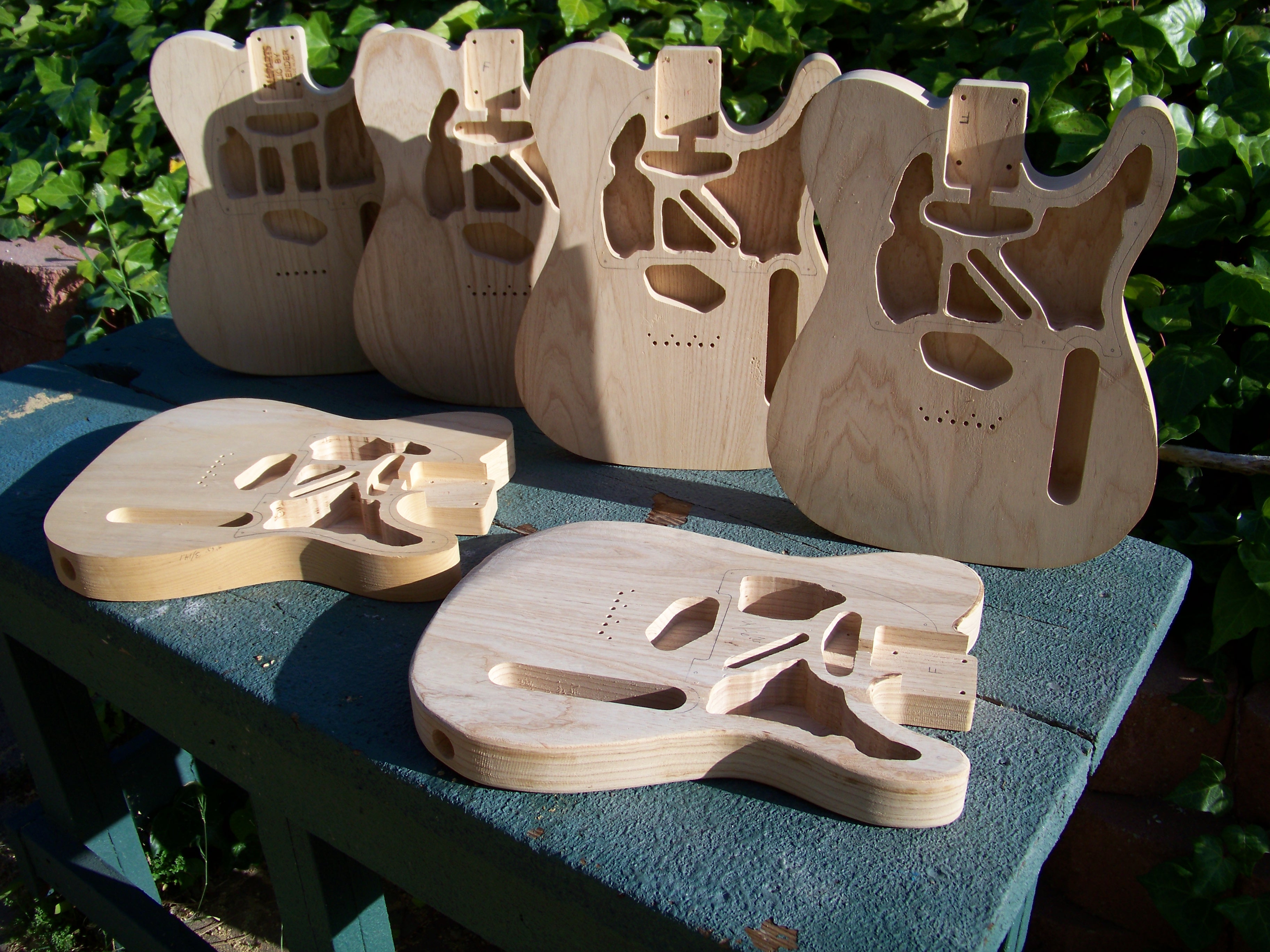 Early results are promising. Routing under the pickguard in this pattern reduced these bodies from 7 to 11 ounces each. I was not excited about routing into the area between the bridge and neck pocket, but I've done this before and I was only getting 5 ounces or so with a less aggressive pattern. That was barely worth the noise and mess!

I've been on a Richie Kotzen kick lately, so most of them are going to get forearm contours and belly cuts. Those simple tweaks make the Tele body curiously comfortable. Why not?

Some turquoise finishes in my future. Ebony boards, maybe. They all should finish up at 7 1/2 to a hair over 8 1/4.

Commonly referred to as a Smugglers Tele.
K

Oh, you can put all kinds of dirty little things in there.

I'm thinking I will write some inspirational messages in the cavities. "Peace and Love", "Compassion and Tolerance", "Coltrane Lives", that sort of thing. Might make them sound more inspirational!

Give them away to people you don't like, after having put anchovies in those cavities, LOL!
I had a Tele-shaped, semi-hollow G&L ASAT bass, worst neck-dive I've ever experienced.
I bought it before I knew what neck-dive was & when I finally realized why playing it felt like a fight, I've been very concerned with balance ever since.

Killed_by_Death said:
Give them away to people you don't like, after having put anchovies in those cavities, LOL!
I had a Tele-shaped, semi-hollow G&L ASAT bass, worst neck-dive I've ever experienced.
I bought it before I knew what neck-dive was & when I finally realized why playing it felt like a fight, I've been very concerned with balance ever since.
Click to expand...

My first bass was an epiphone EB-3. Neck dive was an understatement, and I learned all about it very quickly as well.

In the OP's case, it sounds as if those bodies started off on the heavy side, since he predicts builds in the 7.5 to 8.25 Lb. range. That would be a body in the 4 Lb. range.

Of course, I'd be happy to receive them and dispose of them properly ;-)

Building myself a guitar. Nothing to look at, it may just be a steppingstone to the next one. But I have specific requirements. An electric that weights nothing and has a belly cut and arm bevel. The reason for it is my skin became sensitized and a normal guitar hurts me, I was unsure when I started if I was going to build an electric or an acoustic so I glued a couple of pieces of spruce together and roughed out a neck. I put an aluminum strip in as a truss rod. No not adjustable, hope the string tension gets the relief in the ballpark.

Had an old hacked oak fretboard that I finally have a project for. Generally a Tele shape, I love the look of them but it was when I finally tried a Strat styled body I realized I will never have a simple slab type guitar. Finally decided to go electric which meant I had to whittle down some areas, build up the sides. 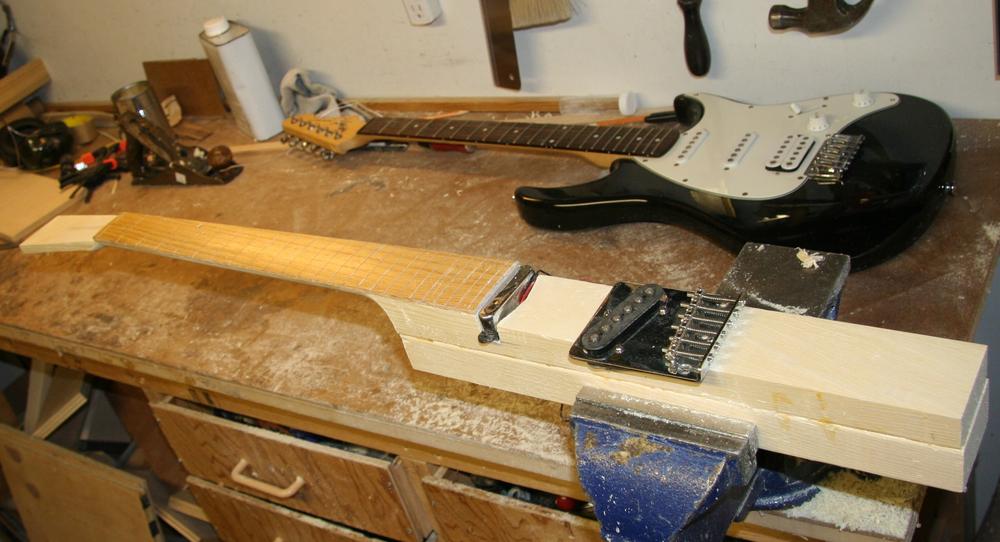 May not be the most exotic of wood but I had some lumber that was light weight and straight grained with no funny stuff going on. Being quartered did not matter too much but since it was so much the better. Glued it up and shaved it down. 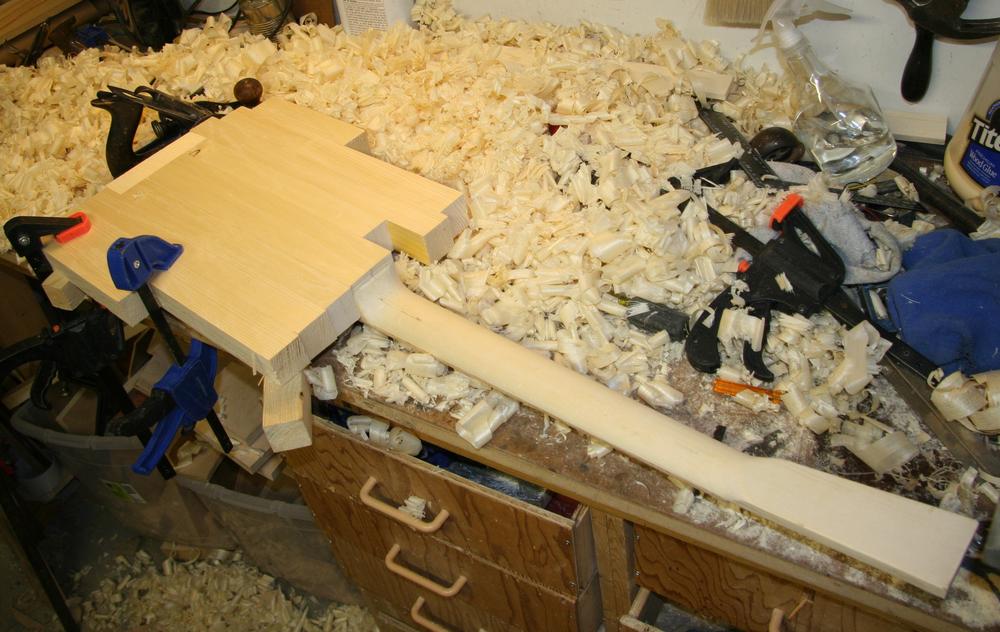 Routed out the pickup locations. 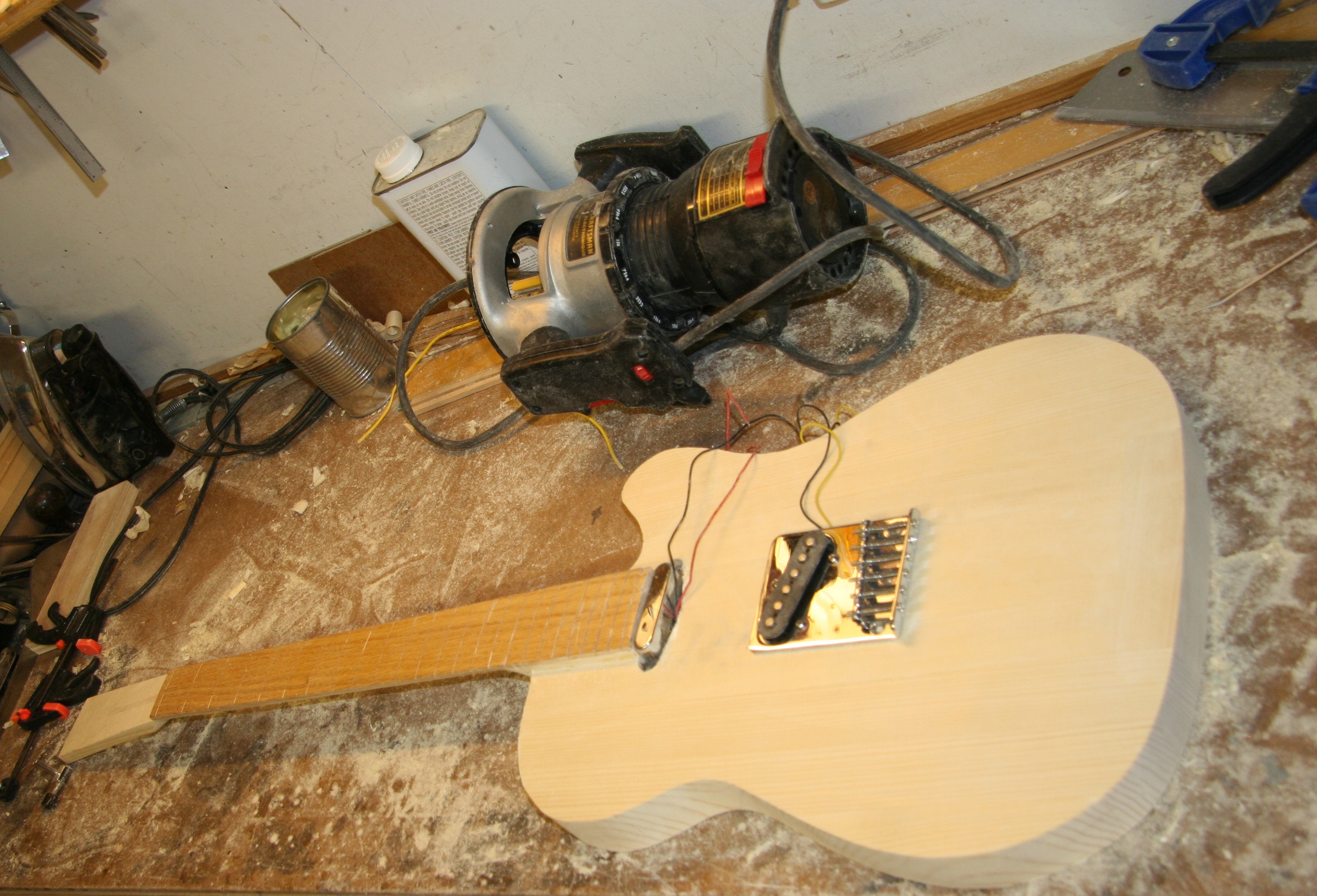 Started to hog out the back. 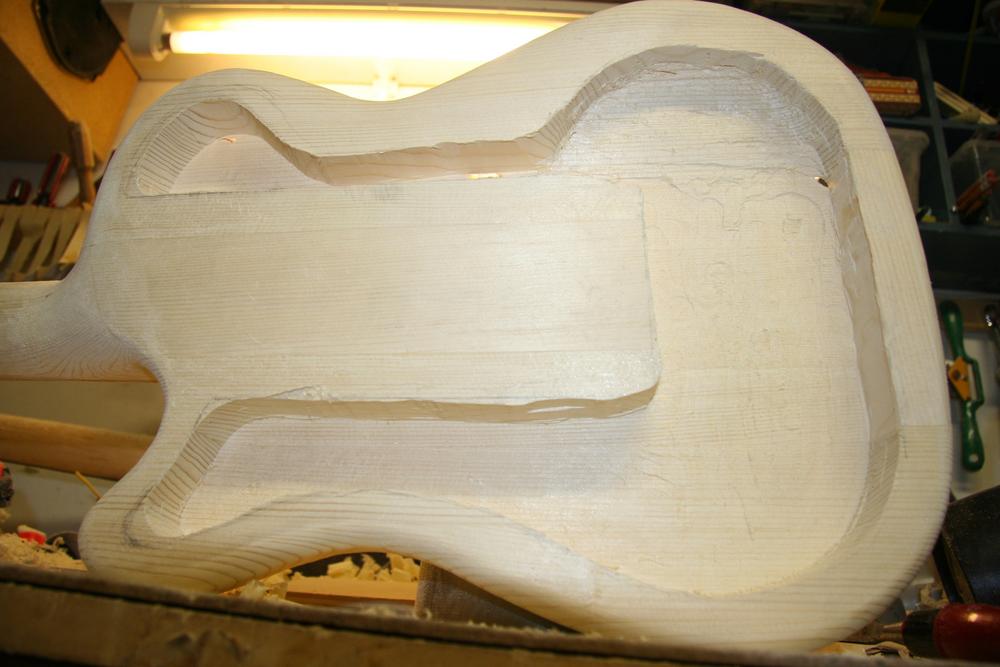 Made a few mistakes, the depth at the lower side of the guitar was fine but I forgot I tappered the top. A little repair work required. Gouged out what was practical and made up two panels for the back. 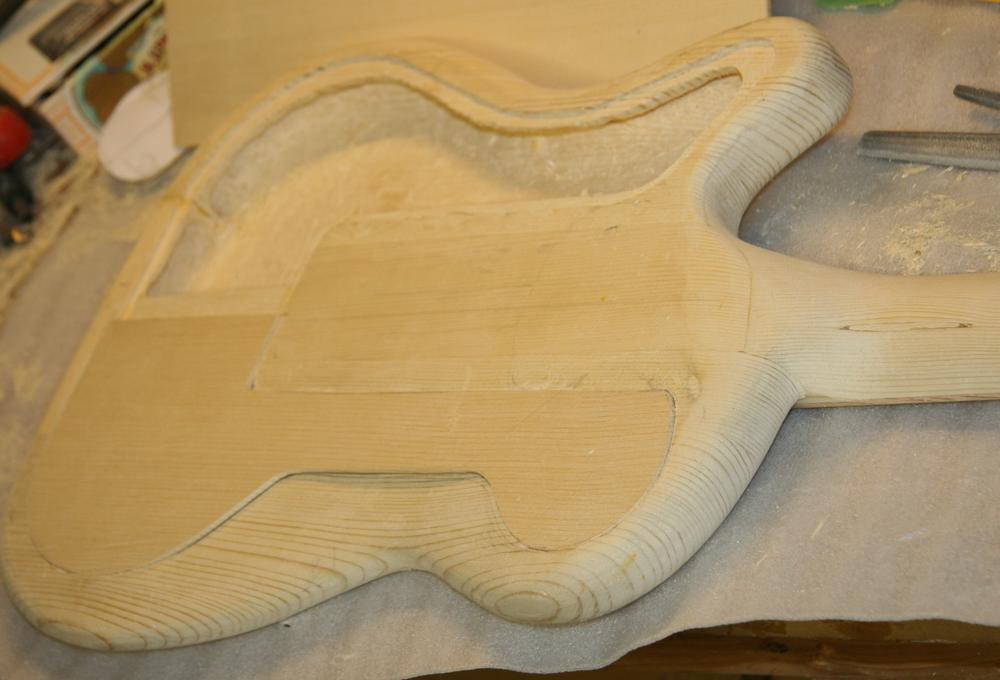 With ukulele tuner and a neck pickup it is 2 lbs 12 oz, the bridge and paint should get it up to 3 lbs. Heavier than I wanted but I did not want to go to acoustic guitar construction. The bevels would have taken more time than I wanted to spend at the time. I have a couple of other projects to do for other people. Not going to make excuses, this was a hack job with no plan. A little bit of filler and paint will hid some sins. But the neck and fretboard should be reasonably playable, the oak filled with CA and leveled. 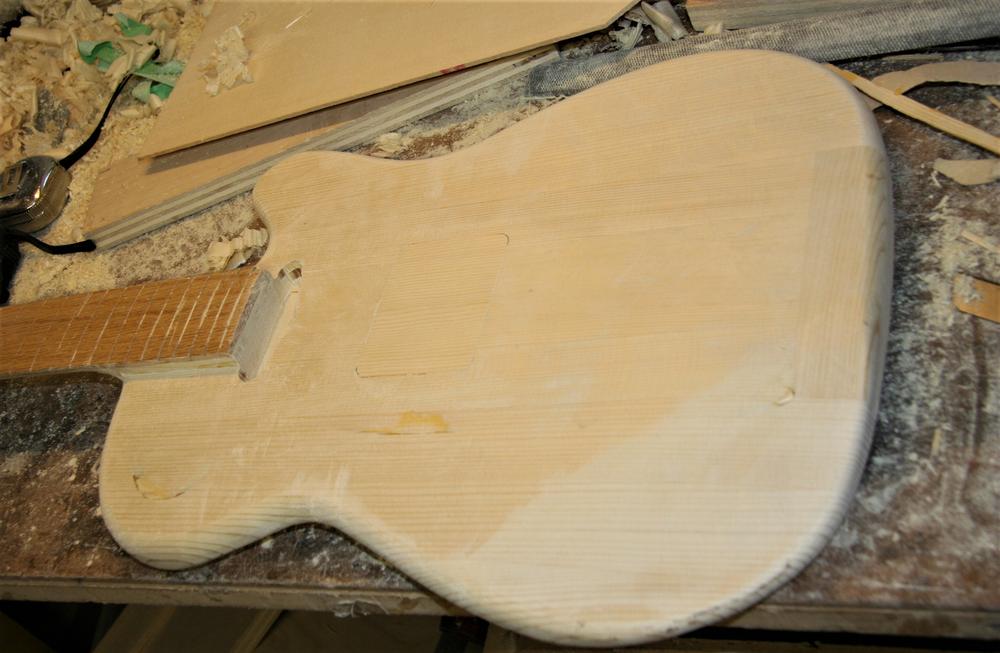 Khromo said:
Nothing except getting covered in sawdust! Now that is a good time! Whoa!
Click to expand...

Is there a dustier process than routing?

Tone_Terrific said:
Is there a dustier process than routing?

I made a pair of radius dishes, routing out the shape into MDF. Absolutely horrid stuff as far as dust is concerne. Took a leaf blower and blew out the garage after sweeping up. It was everywhere. Doing the caveties here was not that bad. One day I will get my dust collector going though.
You must log in or register to reply here.
Share:
Facebook Twitter Reddit Pinterest Tumblr WhatsApp Email Share Link