I have the Goya classical guitar that my Dad bought in 1962. I started playing it in 1964. I learned all the solos on the Beano album on it. Well, most of them anyway.
In other news, today I bought an upright bass from Kedar, a 1943 Chubby Jackson Kay. Damn, those notes are far apart.

Kingsley Fats said:
SWEET really liked the guitar break in Have You Ever.

Any chance of gigging in my area so I can hear that sucker up close & personal
Click to expand...

tommc said:
Anyone willing to humor me with a little poll just for fun? Two questions: What is the longest you have ever owned any single guitar? What guitar that you currently own have you had the longest?
Click to expand...

mannish said:
just curious is there another forum dealing with blues not necessarily WCB but with intelligent, behaved folks, knowledgeable folks. I need to block every the

Have you been to the Weenie Campbell site?
http://weeniecampbell.com/yabbse/
T

Stringmaster said:
They are one in the same--I've had my '54 Guild X550 since the mid 80's--so about 30 years. It carried me through not only Blues bands but also traditional Country, Rockabilly, and a Hank Sr. tribute band. I finally broke down and had it refrettted a few years ago. It has some wear on it, but honestly not much more than when I bought it--so who ever had it before me used it a lot, and rode the knobs! I bought the gold Guild Bigsby direct from Guild shortly after I got it but still have the original tailpiece too. 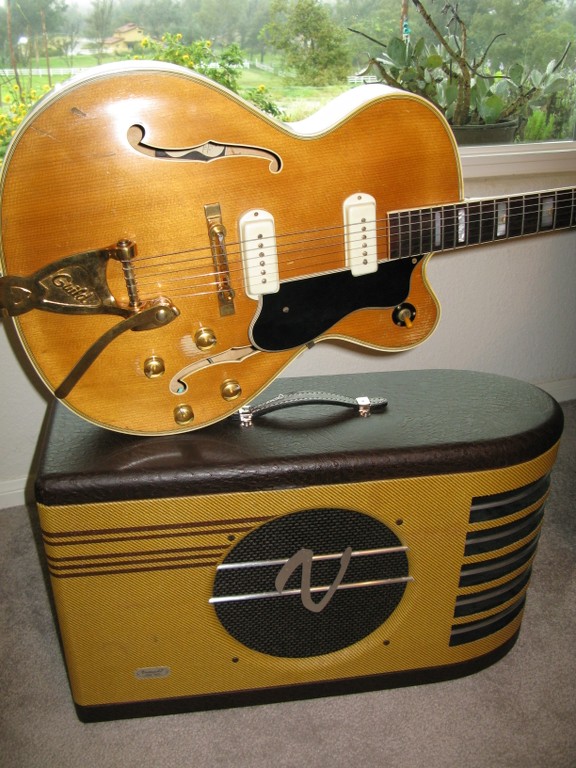 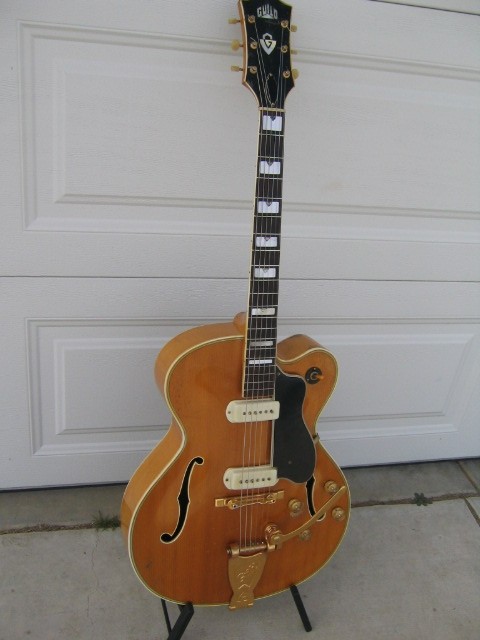 That's a Vintage 47 amp in the pic, correct? How do like that amp? Is it used in either of the clips you posted? I'm thinking about a V47 Ric Supreme.

tommc said:
That's a Vintage 47 amp in the pic, correct? How do like that amp? Is it used in either of the clips you posted? I'm thinking about a V47 Ric Supreme.
Click to expand...

Stringmaster said:
Thanks KF--Would love to come down--but doubt it could happen--but if you come to So Cal--might could connect
Click to expand...

A trip to USA is on our wish list. Nearly did it last year but our son decided to get married which scuttled those plans.

A few years back we had a friend of my sons stay with us for a few weeks as a guest. He was from San Diego & felt that it was a city similar to Perth in many ways. Both cities are tucked away in the corner away from the big noise. The problem if we did get on this tour is that I would have the wife with me & for some reason she isn't overly thrilled in getting draqged along to blues gigs.

tommc said:
Anyone willing to humor me with a little poll just for fun? Two questions: What is the longest you have ever owned any single guitar? What guitar that you currently own have you had the longest?
Click to expand...

My first guitar, a Fender acoustic. I purchased it when my Father was the accountant at Foxes music in Falls Church, Va back in '82 or '83, I think? It's sitting over in the gig bag about six feet for me now (I took it to practice last week). I pull it out every now and then, but it really has been replaced by a good acoustic I bought a year or so ago. However, my youngest daughter has laid claim to it... She has required that if I haven't given it to her sooner, it is to be bequeathed in my will to her and no-one else! LOL

My first 'good' electric was a 1970 SG. That's downstairs on the rack in my practice space. I play it pretty regularly still.

I kept a few guitars for a very long time (a '68 ES-340 was around for about 18 years), then found Internet forums... Went through a bit of a craze, but now, I've settled down to a number of regulars and a small bit of GAS here and there. But, the SG and the Acoustic are still around. I keep thinking about letting the SG go... But, it's been with me so long now, it's hard.

My 62 Concert Amp...I've had it for over 35 years. I replaced the ripped tan grille cloth in the early 80's when all that was available was the BM grille cloth. This is a Field Test Unit with '58 Bassman transformers.

Sold a guitar this summer that I had bought new in '75, had I known this topic would come up I might have kept it ;-)

63 Strat I bought in 1980, bad refin and was all modded up '70s style, brass everything only the wood was original. But played and sounded great for $350. Gigged it hard for about 25 years (the reason I lol at relic jobs). 37 years or so with me now, I finally stripped the crap finish off and it is in the process of being reassembled.

Lately I am using 3 guitars I bought this summer, all basically new. 2x2012 production model Gibson ES line and a parts Tele. Real happy with them.

The recent posts about the guitars you've owned the longest reminded me that I hadn't taken the goldtop out in a while. I've been in situations recently where I needed to have something with a Bigsby, so the go-to had been the ES295, and I'd bring along a Tele for backup. Last night I brought out the Tokai and was reminded in every way why I've had this guitar for so long. It just fits like a glove and rings like a bell - just a superior instrument for me in all respects. Thanks for the reminder!

Let's do amps too! [Inspired by George's brown Concert amp above!]

tommc said:
That's a Vintage 47 amp in the pic, correct? How do like that amp? Is it used in either of the clips you posted? I'm thinking about a V47 Ric Supreme.
Click to expand...

I have two. I really like them. They really nail a late 40s low fi sound. I use them live but not quite as much as I used to because I have other amps that capture a slightly later sound better so are a bit more versatile. I don't own Supros quite as old as the ones they are replicating—mine are early 50s—but they nail a sound we hear over and over again on record. Raspy tone when driven, a little instability in voicing or something like that, aggressively lo fi. I'm thinking of getting their CC Gibson clone. I'm not sure it's better than the Californian clone, it's almost certainly not as good as the Dutch clone, but it's easily the most affordable.

valcotone said:
Let's do amps too! [Inspired by George's brown Concert amp above!]

good call. I put a WGS ET65 in mine as well and it's sublime. I just wonder if all their speakers are this good.

and fwiw, here's another thumbs up for the Vintage 47 amps.

New England crew: We have lost a dear friend. Message me for more information.

Loving the thread,
Sadly I never keep anything too long.
I do have a Strat neck on one of mine from the 80's.
I have had some beauts, tho. I like to think that in
the last moments of my life, I could be in a room with them all.

So, Lets do a GASSERS list.
What have you had, owned, and not kept...

RickyKing said:
So, Lets do a GASSERS list.
What have you had, owned, and not kept...
Click to expand...

Ricky, can we include things that we bought, sold, then bought and sold again? Like that 2x10 Holmes Super amp?