What acoustic do you play?...and

I would like to have a Nick Lucas one day....Fingerpicking you know....

rusty a. said:
Martin D-76 that my boss bought new...only had it in my hands for a couple weeks but it's the favorite of the bunch already...i was gas'n for a BIG sounding rosewood dreadnought the past six months and this one kinda fell in my lap at the right time! one of the best sounding martin's i've ever heard!!!
Click to expand...

Isn't that also the only Martin with a transferable warranty?

Martin D15 from the days when they were all solid mahogany.

I've been mainly gigging the Ovation 2007BCS and recording with the Larrivee LV-09E. I did, however, take the 2006FKOA out on my last solo acoustic thang and fell back in love with it, so it may go out with me for a while now.

In the unlikely event that I would get another acoustic, I would be looking at a Collings.

I have three that I play and each has it's own voice or use.

What guitar do I want..... other than a few Custom Luthier built guitars I drool over occasionally, I think I am set for life with the three I have.

The Taylor would be my #1 as I have owned it the longest and it just feels like putting on my most comfortable pair of jeans when I pick it up.

Gibson 1997 hummingbird artist/custom. I have been wanting a martin d45 since i can remember.
D

I have a Blueridge BR-160, a Takamine EN-10C and a 20-year old, warped-topped Tanglewood 12-string. They all sound good, and do what I need, but I'd love a Lowden, or a nice Martin dreadnought....

An '02 Fall Ltd. Ed. Taylor 710 Dred, the first of the "re-voiced" Taylor Dreds. and an '07 Gibson Advanced Jumbo - they sound different from each other - the Taylor is often tuned to open tunings, Gibby stays in std. tuning - both have a DTar Wavelegnth PU installed - the 18volt pu has plenty of headroom for rhythm strumming w/a band.

Alvarez-Yairi Garcia model. Really nice sounding and playing guitar.
I'd like to own a Martin Koa from the 20's.
X

Currently playing a taylor 714ce, if i buy another acoustic to go with it i will get a 814ce or martin hd28.
G

Right on, Bryan! I've got an O25 too. Great guitar! Cedar top, fingerpicker's delight - but strums as loud as a cannon as well. I'll never have another acoustic. I love it.
M

I gig with a Gibson Nick Lucas reissue & National Delphi - my favorite is the 34 Gibson L-00....not even close followed by Collings c-10.....So my go to for gigs is the Nick Lucas & Delphi but the others are incredible ..Collings not in the picture

I don't really play acoustic much. I still have the one I learned guitar on, a no-name MIJ '70's acoustic my dad picked up in Japan. It's a bit tinny, but I hold onto it for sentimental reasons. I also have a beater '70's Yamaha 12-string that sounds great. I picked up the Yammy 12 in a local pawn for $150. Both are pictured below: 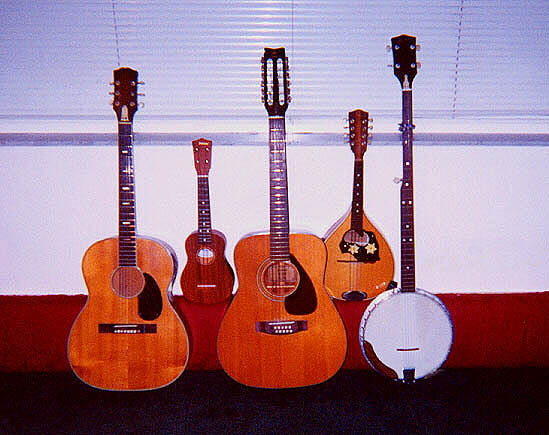 Last, a year or so ago I needed an acoustic-electric for an audition for a temporary church gig. I was flat broke and not keen on spending a lot for an audition for a gig I might not even get, so I checked a couple local pawns for something cheap that had a pickup. One place had a Stratacoustic, which was terrible, but at another pawn I found this for a Benjamin even:

I'm sure it's probably made of cardboard and spit, by 9-year-old Chinese slave girls chained to guitar-making machines, but everything works, the tuners hold, the action is acceptable, and the acoustic tone is OK.

I've played it in church a couple times and even gigged it with my side hippie band. I find it humorous that our lead singer is playing a Martin acoustic while I'm playing an Esteban.

You know what? Know one in the audience cares or even knows.

You may now all heap ridicule on me no end.

1999 Martin OM-21. Original owner and love how it has aged so well over the years.
J

Brian Krashpad said:
You may now all heap ridicule on me no end.
Click to expand...

Not from me! Whatever works for you...
P

I really like my larrive. If I were to get another acoustic, I think I would just want another one, but a different model.