What is the favorite acoustic that you've ever played?

Easy. Traugott. I've played a lot of high end luthiers and vintage guitars. This guy has something truly special goin' on.

Tough call. Probably a toss up between a Rockbridge 'hog dread I tried at a store in Austin and a sunburst Collings CJMhSSG (if I got that right....haha) that I tried at a store in Phoenix. Luckily, I've got a H&D TDM that is pretty dang close to those two in terms of mind-blowing tone.
B

I have played a few Huss and Daltons and Collings that were pretty good and I have owned a bunch of stellar martins and gibbons and Taylors but my Orpheum 12 fret slot head is the best. It plays very easy and sounds HUGE. Its a lap piano.
Last edited: Jan 2, 2017

Martin D45L - its my avatar pic

To directly answer the OP: I once played a 1939 Gibson L5 who's lore was nearly as stellar as it's condition. It was mint, and once owned by Sinatra's guitarist and jazz legend Al Viola. While I was settling in and getting over my sycophantic phase (legendary guitars give me butterflies and it takes awhile to get over that biased perception)... I noticed that the damn guitar was tickling my ribs like no other I had ever felt. The most tactile guitar ever...

But that was just one of the many stellar guitars I have to put with in my line of work. I visit with many phenomenal examples of the luthiers craft and can comment on them as if I played them just the other day... they really stick in my mind.


maydaynyc said:
The nicest acoustic I ever played was a MacPhearson.
Click to expand...

My first McPherson blew my mind. It took a long time to find any other guitar that felt so soft and yet rang so loud. Which guitar overtook the McPherson? The Lowden below.

Right on brothers! We are rare breed... Her is my D-30. Purchased for pennies, te thing sounded like a block of stone. I brought this back to life from twenty years of un-played tone death... it literally had zero sustain until I beat it back to playability and it now rings longer, louder and more sweetly than any othe guitar I have ever felt ... 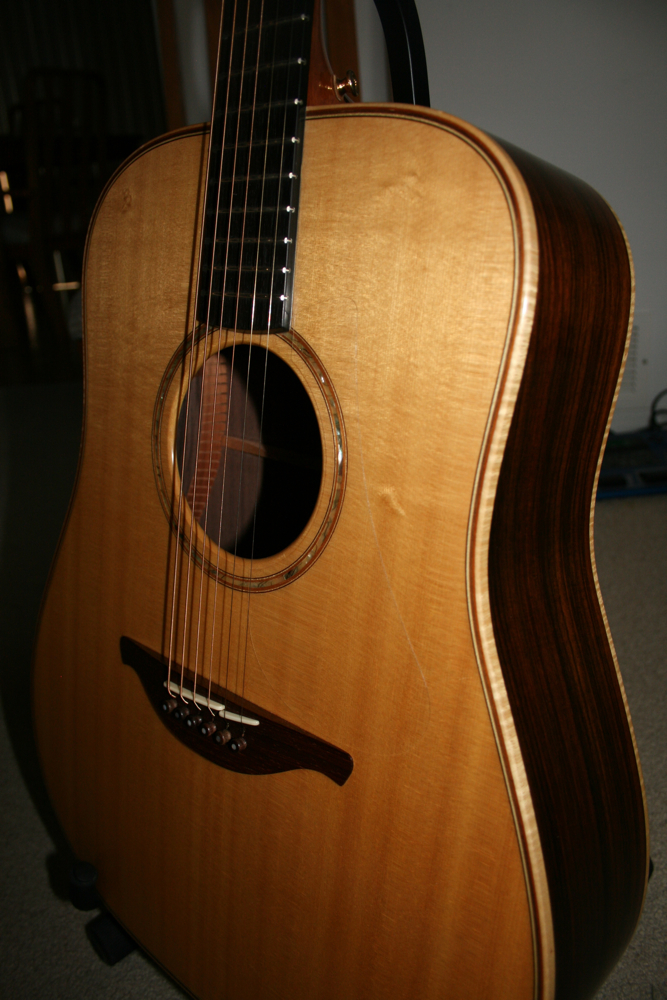 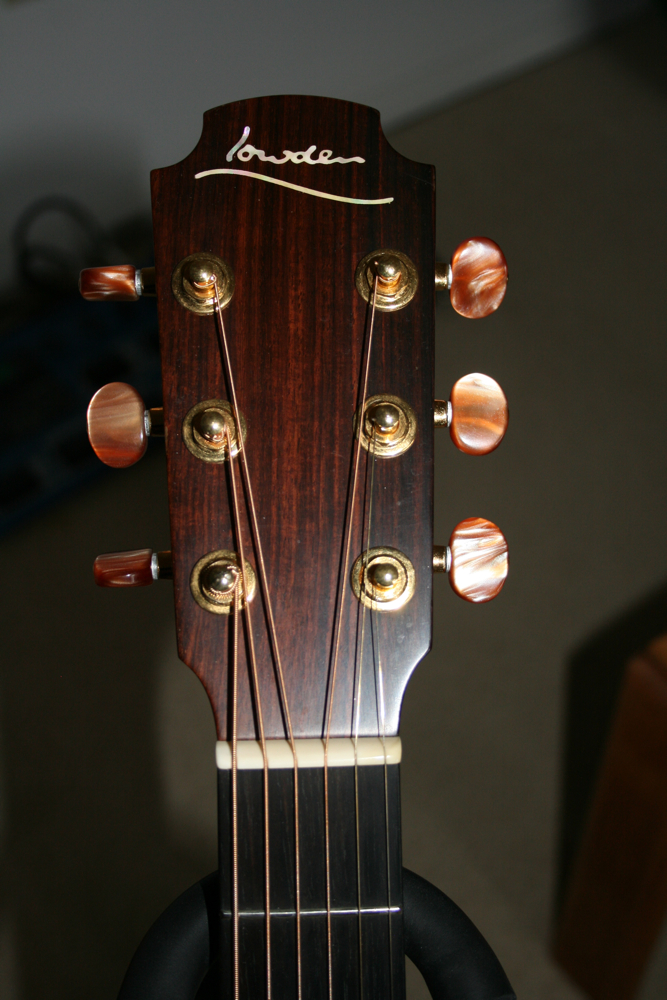 My Collings OM1
It's the one guitar I'll have until I die.

tonemandan said:
Easy. Traugott. I've played a lot of high end luthiers and vintage guitars. This guy has something truly special goin' on.
Click to expand...

I said a Kim Walker, but Traugott is the maker whose work I've not played but would most like to.
A

2014 Collings OM2HG cocobolo
I'm very fortunate to have it.

kristian said:
Of the guitars I have owned, a John How mahogany/adirondack ladder braced and a Santa Cruz OM/PW Indian rosewood/sitka stand out.
Click to expand...

A regular standard J45. It was the most roomfilling and 3D sound I have ever heard. Sadly I was out of cash at that time.... . Played a bunch of Gibson J45 after that, nothing came close to that one. That was one of the special ones I guess.
That's what I love about acoustics, 2 of the same model can sound completely different. Electrics not so much.

My SJ200 is my favorite and I plan on keeping it for as long as I am on this earth.

Taylor 714CE sunburst. I own a 214CE but think about that one everytime i play it...is that cheating?
G

Dr. Tweedbucket said:
For me it's a toss up between a Gibson Hummingbird 60s reissue, a Custom shop quilted maple back and sides Hummingbird, and a Martin HD28V.

If I had to pick just one, I'd probably go for the Mahogany Hummingbird with fresh strings. It's got fat tone and a great balance. It plays like an electric!


A couple of years ago while in L.A. I picked up a '64 SJ-200. It just jumped out at me, as it was a player with a fair bit of road wear, and not yet another minty collector unit. As soon as I played 2 chords I knew I was in, as it just had all that SJ goodness, and at a price I could actually justify (well, sort of...)

I'm just finishing a neck reset on it, and I had it jigged up in a special clamp (that allows it to be played before gluing the neck back in) for a final check today and it's actually exceeded my expectations.... I couldn't put the thing down for over an hour... I'm REALLY looking forward to playing this one out!

I have been scrounging to order a Custom Shop Martin... another story. But I was in a music store talking to the owner about the ordering process. After a little while he said: I don't normally do this, but I like you. Now he had my curiosity up. He went to his office and brought out a 1948 D-28. They had just finished doing a neck reset and a fret job on it, but otherwise it still looked great. He handed it to me. It was so punchy fingerpicked. But when I got out a pick this thing came to life. Such a rich, complex tone. I've never heard another like it and I have played a lot of Martins. I asked him how much he wanted for it and he said it was staying with him for the rest of his life. I don't blame him. Although the neck was way too beefy for my small hands, it had a tone that will haunt me for life.

RoguePlayer said:
My fav out of the ones I've ever had access to is a Martin Mark Knopfler model. Don't know the specifics, but it was the finest acoustic I've ever heard. Not too dark, not too bright, just a nice round bottom end with a glassy top. It's the guitar that finally got me to purchase a higher end acoustic.
Click to expand...

Did you play the Dread Knopfler or the 000 version?

The first guitar that came to mind when I saw the thread title was a Lowden that I spent a few hours with in the early 90s. Mid sized body, cedar/walnut. My memory of it is that it had both the most consistent tone all over the neck, and that it responded to my playing dynamics like it was one step ahead of me. Loved the aesthetic too, just was more than I could afford at the time. Other guitars that come to mind were a Goodall (don’t remember specifics) and a Santa Cruz Duck Baker.

I ended up with an early Taylor 812, that was built using a 12 string neck, so it has a 1 7/8 nut on it. When I had been going around to different shops testing out guitars, the taylors at one shop (it was a side business for a classical guitar luthier) always sounded better than those anywhere else, but the shop charged list on them. I had bought my guitar used, and it needed a bit of neck work, so I brought it to him, and mentioned how the Taylor’s he sold sounded better than they did anywhere else to me. He said, oh, I shave the braces and retune the tops on them, it’s why I need to charge list. So, I paid him to do the same, and it went from a nice guitar to a great one.

But just a few weeks ago, I found myself researching Lowden’s more recent guitars... and the very next day, we watched a Richard Thompson simulcast (there’s another one happening this Sunday, if you like him, pay up and watch it!), where he was playing one. This may be the time.

You guys have great taste. Lots of beautiful guitars talked up here.

I worked in a studio in NOLA for years, and played many a fine guitar, but for me the hands down best was a L-00 Gibson, finish all gone, refretted with jumbo frets, heavy strings tuned to D. That beast cut like no other, had this snap and drive especially since I don’t use a pick. I tried to buy it, and the guy just laughed. He knew.
You must log in or register to reply here.
Share:
Facebook Twitter Reddit Pinterest Tumblr WhatsApp Email Link