What is the least expensive guitar you own?

I would have to say the most surprising is the Vance Jensen tele - well made - custom pickups, Tru Oil and enamel finish under $200 new! jwguitar said:
I recorded this short video with the least expensive guitar (Cort CR300 - $599) and amp (Monoprice 5 watt tube amp $120) I own. What lower price guitars do you own and enjoy playing?

Mine is a Limited Edition Lightweight Ash American Professional Telecaster. Why? I live in a fifth wheel RV and don't have room for many guitars.

it's good, my other guitars are at least 2,3 times and up

sadly it does not get a lot of play time as either my P90 or PRS Paul's, but when I play it I like it

I have two acoustic guitars I got during a Sam Ash promotion, If you spent 200 on something and at the time I needed a Logic update that was 200, you got an acoustic guitar for free. It was a Carlo Robelli and at first I was going to give it to my nephew but honestly it sounded too good, so I strung it up with Nashville tuning and it's been my high strung guitar in the studio ever since. The second one was during a similar Ash promotion except it was 300 I to spend which conveniently I needed to, this was a Robelli 12 string. This guitar hasn't worked out so well though, it kinda fell apart, the nut broke and the bridge lifted. I also own 2 Agile guitars a Cool Cat and a Valkrie, the Cool Cat was a great deal 400 for a L5 copy with an ebony board, It sounds great and plays like butter. The Valkyrie is like an old SG special with P90's I think it was 239 dollars. After I got it I a/b'ed it with a bunch of SG's at Guitar Center and the only one I thought came close was an 1800 dollar 61 reissue, both really good instruments. I upgraded the pickups on both and they are keepers.

Squier Standard Stratocaster ($250), Danelectro DC-12 ($299), and a Fender Gemini II (used, free). The Squier and Danelectro were bought to play a gig in Mobile where the guitars were going to stay on stage all day long. I had no desire to leave my Strat Plus and Ric 360-12 out for someone to steal. The Gemini II is my camping guitar, a gift from a friend.
G

I recently bought a MIJ Squier Bullet and a Yamaha G100 for $200. Granted, both had issues I needed to get fixed and the money was going to help out a family in need. But I reckon it'll cost me about $300 for both when all is said and done. It's hard to say how much of the guitar is that cost.
G

MIM HH Jazzmaster I put together. Allparts neck and body with wiring already done, Mastery bridge, and a set of locking tuners. I probably have about $700 in it total, and it's now my #1.
S

I have a bunch of guitars including a couple of Gibsons but lately, I have bought 3 used guitars that cost me about $65 US each. There are two Epiphone Juniors and I Robson Les Paul. The Robson was in bad shape. The tailpiece was lifting, the fretboard was lifting at the head end, and it was missing a strap peg in the bottom. Glue to the rescue. Following a great article on YouTube, I partially filled the Tailpiece holes and wrapped glue-soaked paper around the tailpiece pegs. I glued down the fretboard and clamped it. I screwed on a strap peg that I had lying around. Voila fixed as good as new. I haven't played it thru an amp but it plays well. One of the Epi's had been re-painted and the neck wasn't replaced correctly. The strings were high. I took the neck off and saw that some gobs of paint in the neck slot were hindering a correct fit. So I scrapped that away. The neck now fits like a glove and the string height is perfect. I also have an $80 US "Cozart" Telecaster that I am just about to re-do the pick-up wiring in order to have more sound choices. It has sort of a fake rosewood top. The neck has a maple fretboard. I have been thinking of installing a neck with a rosewood fretboard so that it would look more like George Harrison's Rosewood Telecaster. Now the cheapest guitar that I play daily consists of two guitars that I bought for $8 US each. One guitar was a "Peavy Raptor plus EXP" with all the frets removed. The other was a Behringer with a broken body. So I put the Behringer neck on the Peavey. I'm slowly working on fixing some fret swell on that beast. Yet the cheapest guitar I still own is a nylon string classical that cost me about 4$ US at a yard sale.

Alleykat $400. Maybe with all the mods it might be the most expensive This is a great topic.

The cheapest guitar I bought personally for myself is also the tragic story of the one that got away. It is the one guitar that is now worth $7,000 according to the the web. I gigged all through college with a Gibson SG - circa 1961, w-p90s, tremolo bridge (without the rest of the tremolo), mahogany colored body with a cream colored head stock. I paid $150 in 1980 for it. It was in rough shape, but other than the tremolo, which I did not miss, it play like a dream. I think Gibson only made them for a year or less in 61/62. It was strange enough to not be popular in 1980, so the dealer just wanted to unload it. Later with a wife and young child, and not having a band to gig with, I had to sell it to make ends meet. That was pre-internet. So, I did a little better than the dealer I got it from, but I wish had the guitar now, of course.

Anyway, I'm sure most people have this stories sooner or later.

Since then, I continue to search for playable guitars, or upgrade components, etc. to make inexpensive guitars playable. Probably the cheapest guitar that impresses me out of the box is the current Grote Jazz guitar with one P90. The only alteration I made to mine was to upgrade the tuners. It sound as good and plays as well as $5000 guitars with custom main brand names that I have played. It's pretty astounding really. I have built several hard body electric and non-electric acoustics myself. The work on the Grote is depressingly tight and well done. $189.

$175 Fender Squier, made in Indonesia, bought in Indonesia. Though i did just rewire the whole thing as "HSS" with a Bare Knuckle Mississippi Queen and 2 left over EBMM Silhouette Special single coils (Dimarzio?). Sounds really good, could use a better setup, maybe locking tuners... 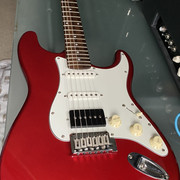 2008 Schecter S1 Blackjack. It's actually frustrating how great this thing plays and sounds, makes my other guitars seemed overpriced, and I don't play expensive guitars! It ain't pretty but it sure as hell gets the job done. Got it for $230 used at GC. I was testing out an amp I wanted and walked out with this instead.

skullfunkerry said:
All my guitars are cheap. My #1 is a Jackson SL3X that was £399 new a couple of years ago. I‘ve swapped out the bridge pickup, but it‘s still a lot of guitar for the money. Here it is:

My cheapest is a Thomann guitar kit for 69. Classic Strat style. As I had all the paints already in my workshop it was pretty cheap. Sounds ok. Never was a big Strat fan, though.

Another is a Jackson ??? 22. I forgot the name. But it is a hardtail Rhoads with 2 Humbuckers. This is the best playable guitar for Metal I own. Don't know why, I know how to adjust my other guitars, but this one is just snappy as hell.