What is the PRS dna sound

PRS has gone from the new kid on the block to becoming a world class guitar producer in 35 years.
There are plenty of threads about the various models. This post is not about which is better or can it sound like xyz, but in your ears, what does a PRS represent and sound like?
I have heard many talk and discuss about the PRS tone being “Gibson meets Fender”, a little Gibson and a little Fenderish making it it’s own thing.
Your thoughts?

I remember PRS used to describe his 90's Dragon II pickups as having "silvery" tone. I take that to mean smoother and less cutting.

PRS doesn’t have its’ own sound, but many of the models have a wider reach that closely accomplish many iconic guitar sounds in one guitar, more so than most other single guitars.
R

How do you describe the "Gibson" or "Fender" sounds?

I don't think the guitars have a signature sound. Like any guitar, they are highly dependent on what pickups go in them. Given a certain set of pickups, they don't sound like a gibson nor a fender, but like other guitars of similar design.

Their stock pickups tend toward rather dark/muddy/bland, and that's where the guitars get a bad rep.

Kinda depends on the model. I'm not a fan of them but I'd never bash them, just not my cup of tea. But to me PRS guitars are meant to be touring guitars. Or for people who want just one guitar that will do almost anything they'd need it to.

1: They look "Good" (good is subjective, I think the super flashy figured tops and outrageous bursts are tacky, but everyone's tastes are different), so they're meant to be seen.

2: They're versatile so you don't have to bring a Les Paul, Strat and Tele with you on the road just to get humbucker and single coil tones, but they don't 100% nail any of those tones which is why I see them more as touring guitars than studio guitars, cause on stage it doesn't have to be perfect, as long as it get's the job done.

3: They're sturdy but still ergonomic and light. So they handle being on the road well, and they're fairly easy to maintain. Easy to use locking tuners, easily adjusted bridge/trem, stable necks.

5: They're consistent. I've never played a lemon of a PRS, they all feel and sound consistently the same out of the box, so on tour if you need a backup it's not like trying to find a custom shop Strat that feels the same as your number one, if you play a Custom 24 then basically any Custom 24 in any shop is gonna be the exact same.

I do my own stunts.

To me, the PRS "sound" is that of being distinctly "in tune".

As opposed to a Les Paul's trademark "sound" of being distinctly "out of tune".

No, not kidding. And for the record, my two Les Paul's are among the favorite guitars I own.

Too many models and pickups to generalize IMO. Huge variance in every direction. My McCarty with 57/08's doesn't have any of the characteristic "smooth blandness" that people so often ascribe to PRS. That guitar has so much snap and bark with nice crisp treble.

I feel that, 15 years ago or more, it might have been meaningful to talk about a "PRS sound" but since then they have introduced enough genuine sonic variety into their lineup that it's no longer possible to generalise.

Gibson meets Fender isn't some sonic signature, it is a description of how the PRS guitar (or what today is a CU24) was marketed. It had an in between scale length, Gibson style aesthetics with Fender comfort, midrangy humbucker tones, but with more single coil like tones available, etc etc etc. PRS was not the first company to make guitars that got different sounds, but they sure popularized it. I really don't know what say these two guitars have in common, other than being built in Maryland: 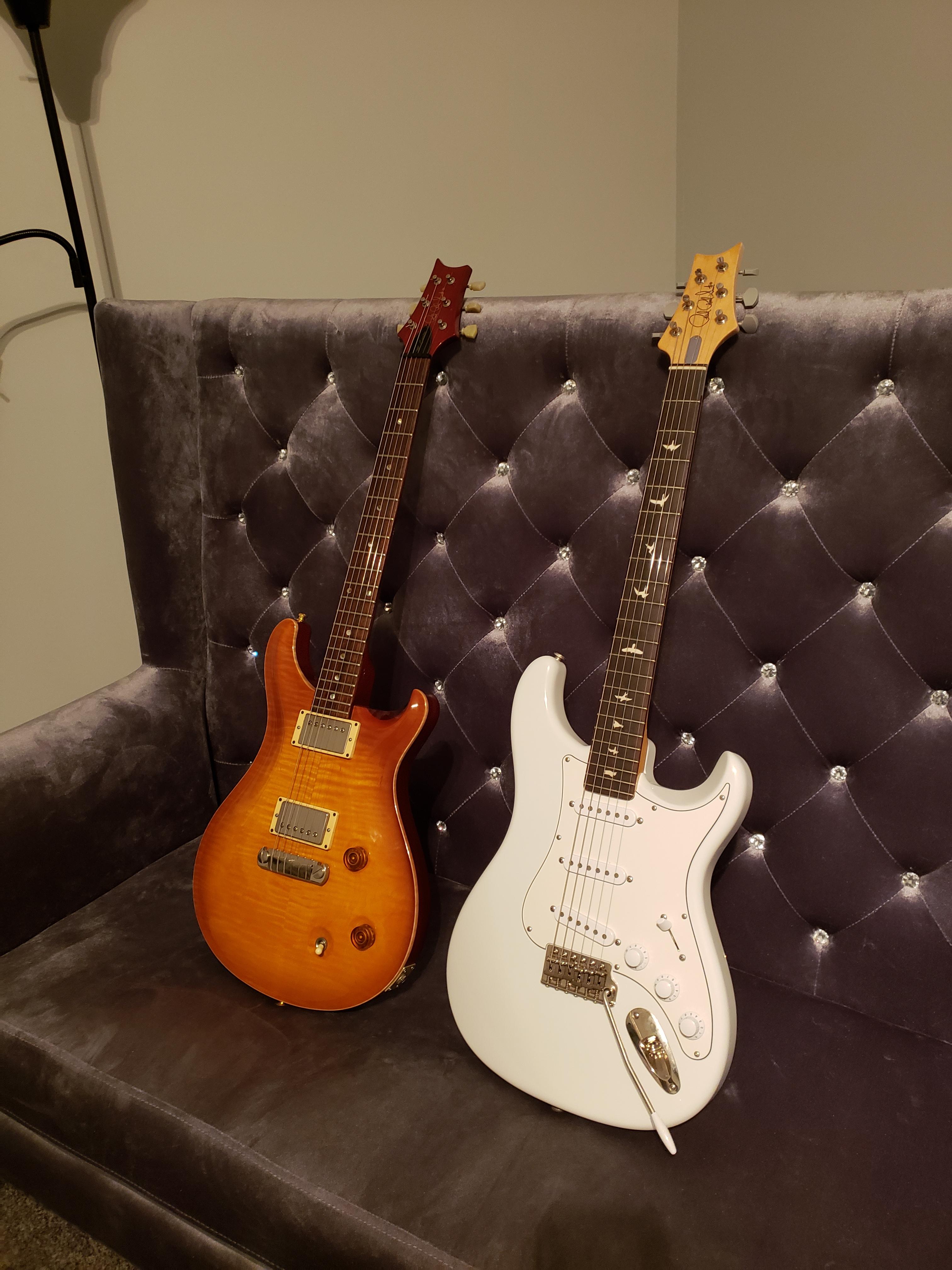 I defy anyone, anywhere, to reliably identify any brand/model/vintage guitar in a blind test recording. PRS is no different. People hear with their eyes, take that out of the equation and all bets are off.

So what do they sound like? Electric guitar, into amp, colored with fingers.

I think the general idea of a mix of a Gibson and Fender qualities all in one guitar. Sort of a middle ground that is versatile enough to approximate both.

Edit: As benz2112 stated, at least the Custom 24 and Standard 24 where it all started is what I get out of PRS. Seems to me they have only tried to come closer to a signature Fender or Gibson sound over the years.

I associate PRS with the two humbucker sound.

Having said that I do have an EG3 which does a nice single coil sound.

I would say "close-ish" to Fender and Gibson's iconic tones.

When I play it? Sounds like a guy who knows one and a half scales and a handful of chords who should be better than he is for as long as he's been playing.
Last edited: Oct 20, 2021
G

To this and everything in between

If so, that's how I'd describe them.

Since tone is in the hands, they are toneless.