What is your "value" guitar?

I have a Vintage Modified Squire Thinline Tele that I just love! I just don't understand what everyone has against the "fake" WRHB pickups... I think they sound great!

Over on the acoustic side I have a Guild GAD25NAT. I'm a huge Guild fan... have three US built Guilds, and this Chinese GAD hangs right with them.

I've had my eye on those Echotones. They look great, and they often sell inexpensively on Reverb. I almost ended up with one of those D'Angelicos. Before they went up on the revolving SDOTD, they had a 50% off sale that put them even a little cheaper. I went in wanting a P90 model and then watched a couple videos on the humbucker models and was really impressed at how they sounded. They really look like excellent guitars at the STOTD prices.


54GT said:
Without a doubt, my Firefly 335. Swapped in pickups I had pulled out of another guitar, replaced tuners and bridge. Didn't have to do a thing to the nut, neck or frets, played nice and smooth. All in, $175. Hasn't displaced my I35, but it's a really good sounding, good playing guitar. I'm sure I totally lucked out on the QC on this one.

As someone mentioned, the MIK Hamer Echotone is also killer.
Click to expand...

Those FF338s are amazing for the money, especially if you do luck out and get one that doesn't need anything. I've gone through 4 (2 sold, one up for sale, 1 is staying) and all of them needed various amounts of work to fix wonky cosmetics, poor setup issues, sharp and/or oxidized frets, or crap bridges, but once you straighten out those issues, the end result is a really nice guitar that plays and sounds great, for very little cash. My keeper is my spalted 338, which I absolutely love. The only thing that I really have any desire to change is to swap to a brighter neck pickup, purely out of personal preference. I think the neck pickups sound good, but they're darker than I prefer, so I picked up a 'bucker-sized P90 and I'm looking forward to swapping it in.

Great guitars.
Great quality.
Great bang for buck.
Gibson name and headstock.
Not under the radar but also not overpriced like LPs.

Many Vintage Guitar readers are probably familiar with Reverend guitars, designed and built by Joe Naylor in Michigan (VG, May ’99). Naylor created Naylor Amplifiers, but later left the company to started this new venture. As someone knowledgeable about tone and what players want to hear in a... 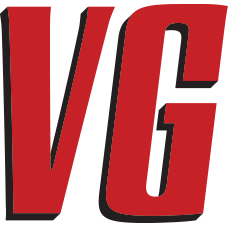 I would suggest looking at all the Reverend models on their site. They've got something for every taste and playing style. I own four myself.
J

cvansickle said:
I would suggest looking at all the Reverend models on their site. They've got something for every taste and playing style. I own four myself.
Click to expand...

could be, mine is from Eastpointe days, I found what I like c 2004 and haven’t had to look further.
S

New Guitars: best value I know of out there in new guitars are the G&L Tributes when MF prices them at $350 as a SDOTD. They do it a half dozen times a year. Insane value for the money. Honorable mention: the low-end priced Ibanez semi-hollows (AS and AM series) are awfully inexpensive yet anything but low-end quality.

Used Guitars: nobody has ever heard of the Ampeg AMG-1 and that's GREAT NEWS for bargain hunters. They always go for under $500 and often go for under $400 and these MIJ guitars punched above their weight even when they were priced at ~$1k new about 20 years ago. Insane used value.
Last edited: Dec 10, 2020
H

Squire Bullet Telecaster that I dressed up the fretboard/frets on and plays and sounds pretty decent for $130.
B

My 06 Faded LP Special with Pearly Gates, 50's wiring, and coil splits is probably the best all round guitar I've played and definitely the most versatile. It's the lowest price guitars I've bought in the last 20 years 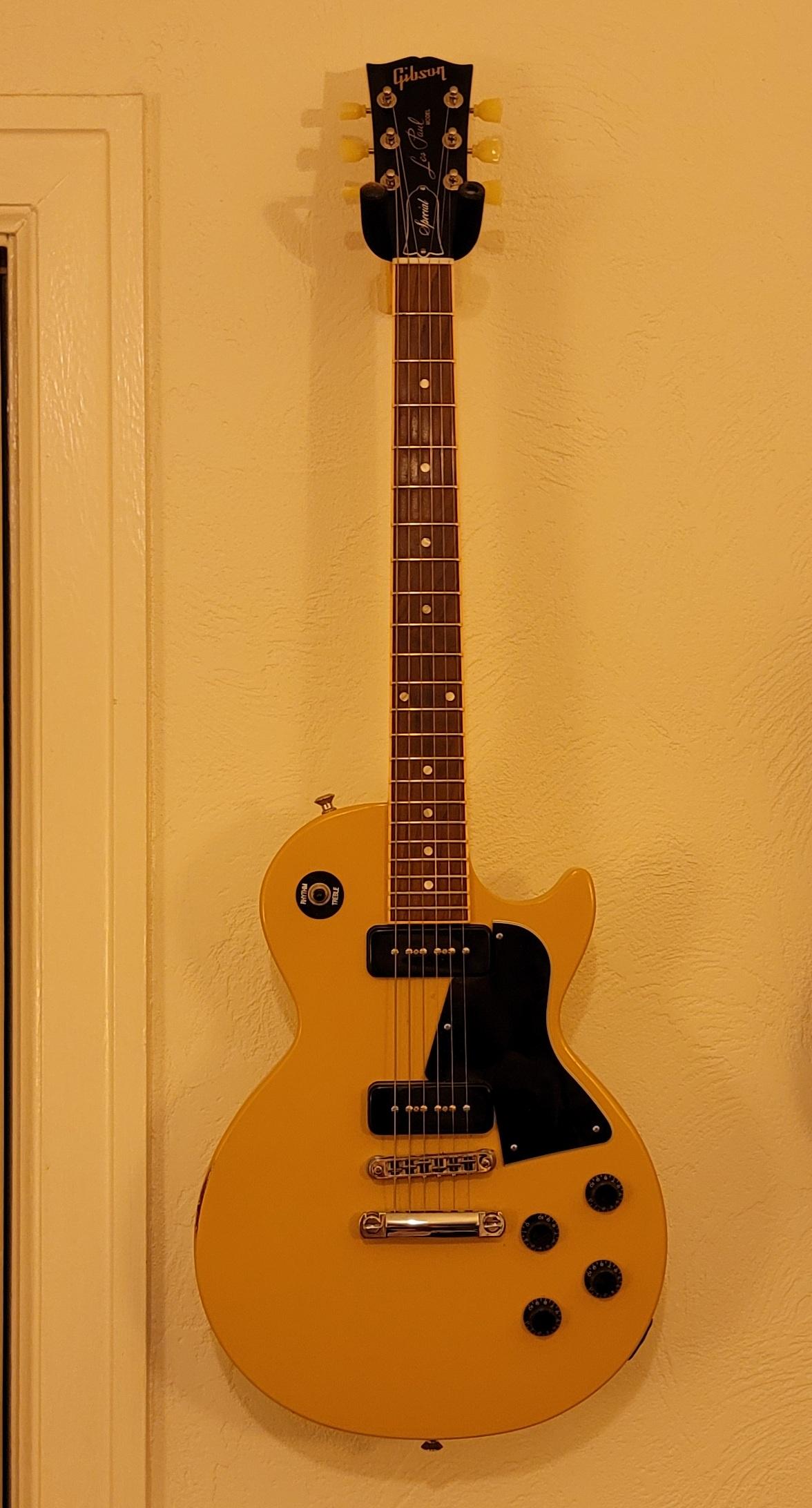 This beautiful beast. Baked maple board, dead stock. Bought on a whim at Guitar Center for $457 on New Years' eve while picking up extra strings for a gig that night. My "most gigged" guitar after maybe my '73 Tele. It absolutely destroys all other Juniors. Fight me.

Ibanez AS73. Finish is perfect, construction is flawless. Sings with perfectly controllable feedback with DiMarzios. $350 new.

This model was only made in 1986. The PL stands for the short-lived Proline Series, that came between the Roadstar and RG eras, if I’m not mistaken. They’re very high quality guitars. There were several models made between 1985 and 86, but the 86 models featured the Edge trem for the first time, which is a significant upgrade to previous Ibanez trems. The necks were basically the Ultra specs, which are slightly thicker than the Wizards.

The 1880 was the second highest model and came either like mine, or in an all walnut finish. The highest end model was a PL2550, with a neckthrough construction and shark fin inlays - basically a Jackson Soloist clone. There was also a PL1660 Jackson Rhodes clone, which is pretty collectible.

Mine is very versatile, with 3 mini-toggles for pickup selection, push-push coil spilt on the humbucker, satin maple neck, bound ebony board, and a mahogany body sandwiched between a flamed maple top and back.

Since I can no longer attach my pictures , here’s an example of the model:

Sorry for the history lesson, but not many people know about these guitars anymore.
Last edited: Dec 10, 2020

Pidgin English said:
Really???!!! I've been wanting one of those Charvel's but can't swing the $800 for the So Cal. Going to have to give this one a gander.
Click to expand...

Definitely. I had one and a San Dimas Style 2, and the Squier was the one I always went to first. The neck felt almost identical to the Charvel - and I loved the reverse headstock
L

Ibanez rg350 or 450 used go for $250 all day long and are solid guitars. Also, squier standard strat that used to sell new for $225 was a great deal. I do enjoy my cheap fender china made starcaster strat with big 70's headstock. It needs new tuners and strap buttons. The only bummer is that the tuning peg holes are too close to the edge and you can't put old kluson style tuners on it because of that. My lowest cost guitar is dean vendetta, new for $90. It needs new saddles and bridge screws need to be reversed. I also have laguna le300 that doesn't need anything, new for $300, includes graphtech nut, locking tuners and wilkinson bridge + alnico pickups.

Harley Benton ST-62DLX Strat. Less than $200 shipped I believe and a huge winner right out of the box for me. The neck is FAT like a Kotzen Tele and the fit and finish were top notch. I went a little crazy onthis one and installed the Fender Clapton wiring kit, locking tuners and strap locks. Finished it off with the Rio Grande Muy Grande pickup set, then sold it! Fortunately I'm getting it back in the next week or so, can't wait. 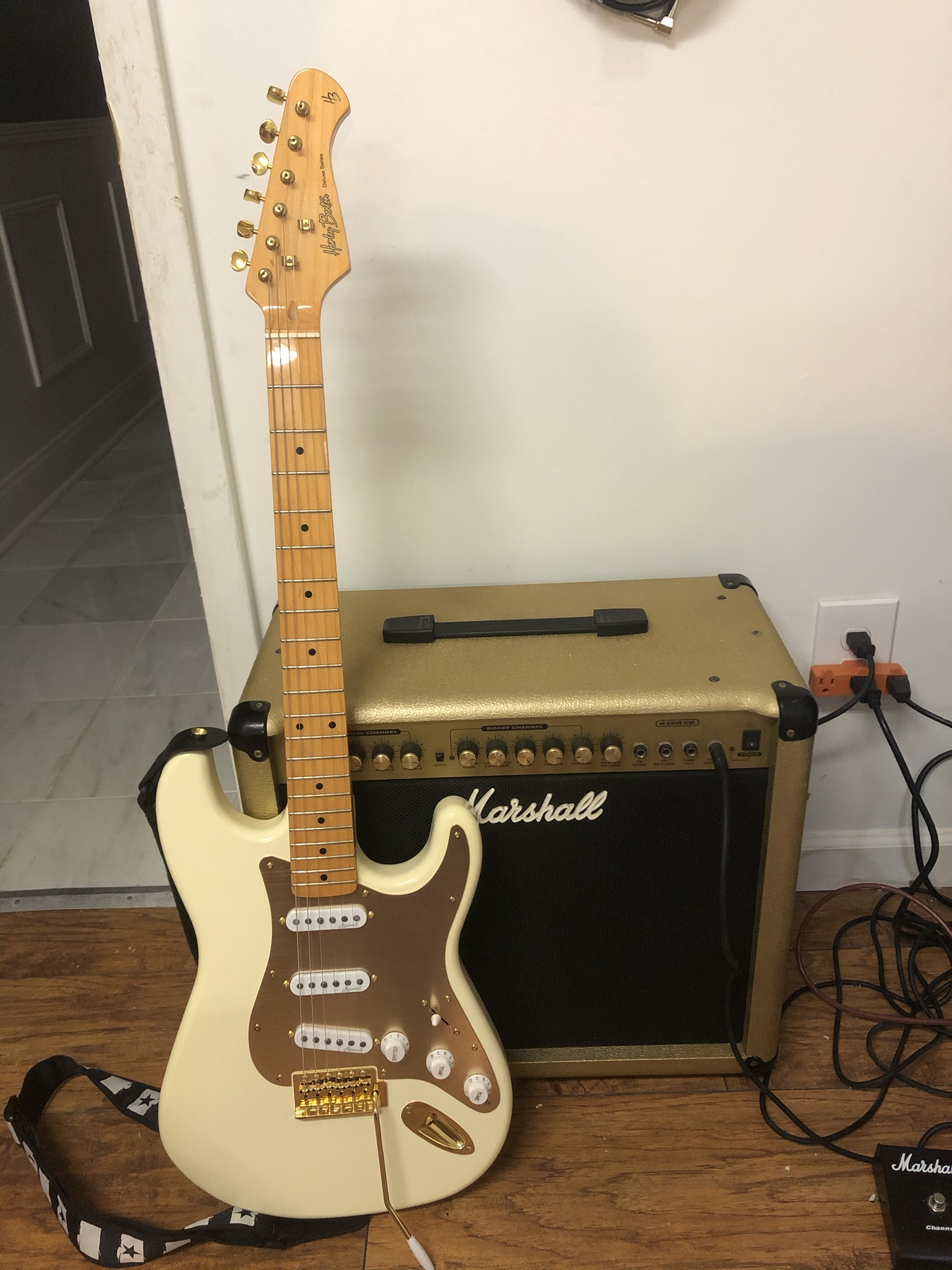 Lonnie00 said:
Harley Benton ST-62DLX Strat. Less than $200 shipped I believe and a huge winner right out of the box for me. The neck is FAT like a Kotzen Tele and the fit and finish were top notch. I went a little crazy onthis one and installed the Fender Clapton wiring kit, locking tuners and strap locks. Finished it off with the Rio Grande Muy Grande pickup set, then sold it! Fortunately I'm getting it back in the next week or so, can't wait.

Cool to hear there’s a substantial neck on these — is the finish typical East Asia thick gloss poly? All my strats have thin necks, wonder if I should try switching that up a bit given that I like beefier stuff on Gibbies...

Also Lonn I’m a die hard Broncos fanatic and I feel like I can’t get away from your Chiefs avatar on the Strat forums...and now I keep bumping into you here too

enigma said:
I enjoy looking and finding gear that's either under the radar or that's underappreciated for whatever reason. In search of a semi-hollow body guitar I found this looker! I never knew Peavey made a semi-hollowbody until I ran into this black beauty: JF1EX. First, the neck carve feels like a Gibson '59 LP and just fits my hand like a glove. The whole neck is slightly tapered at the joint towards the body making the playing experience very ergonomic. I bought it with swapping the original pickups in mind, but they sound great - I may still put a set of TV Jones Classic though. And, to top it off I just installed a Dusenberg Le Trem II - works great!

I buy and sell used guitars. Over the years, I've discovered that, for me, value isn't so much about the price of the guitar, but more about the cost of ownership. I'm looking for guitars that I can buy, play for a year or so, and then sell easily at the same price I paid or more. If I can do that, I'm not too concerned about the numerical price of the guitar.

stilesg57 said:
Cool to hear there’s a substantial neck on these — is the finish typical East Asia thick gloss poly? All my strats have thin necks, wonder if I should try switching that up a bit given that I like beefier stuff on Gibbies...

Also Lonn I’m a die hard Broncos fanatic and I feel like I can’t get away from your Chiefs avatar on the Strat forums...and now I keep bumping into you here too

This particular model is the only one they have with the "D" neck so be careful on that. As for being a Broncos fan....can't help you buddy. You guys put the hurt on us many times in the past. When Neil Smith defected to the Broncos he was dead to me, and the fact that Bo Jackson got his athletic career killed while playing for the Raiders (FFS!!!) was devastating. I'm also a lifelong Royals fan.

Not exactly cheap, but the lowest cost guitars I have that get the most use? And by most use I mean most use of all my electrics? Yamaha.

Last year I picked up an Eastman that was more money than the Yamahas. It quickly became the top gig player and it is lot of guitar for the coin. But since the covid, it is less used. And since it has less history than the Yamahas, the answer is still Yamaha.

Although hard to find, the Korean Ibanez ghostrider is very good. I had one with a set neck and p90s I snagged for 319.00.

Of the guitars I still own, I'd classify the ebmm silo as my "value" guitars. My player grade hardtail was 600 in 2014, and I bought one with a trem for 800 back in Sept. Not dirt cheap, but American made and significantly more expensive new.

This is just my opinion but the Steinberger Spirit GU is an amazing value, if you can find one. They are getting harder to get and the price is going up. Check the prices on USA Steinbergers and you will understand. I have a few guitars but the ones in the pic below were just 3 of my gigging workhorses. Great guitars once you change out the pickups. I have a few of these, every one modified. Love them all!