What methods do you use to match guitar outputs on stage?

In my new band, I have a need for 3 guitars. I have a Rev Daredevil tuned down a half step using humbuckers (stock). I have a Les Paul Classic in standard tuning with Motor City BlissterBuckers. I also have a Am Strat SSS with Bill Lawrence L200s and a L298 in the bridge. The issue I'm having is that the Strat output is below the humbucker guitars. Both of the bridge pickups on the humbucker guitars are in the 13-14K range for resistance. I'm not sure about the BLs, but it's lower for sure. I was thinking of getting a Strat in a HSS config but I've come to find that the Diamonback HBs that Fender puts in those are only around 8.2K which is more classic PAF territory. That doesn't seem like it's solve my output matching...so, I have to use dist/od pedals on the clean to match my humbuckers amp drive output.

Any other methods I could consider? I'd like to simplify and not use any drive pedals or boost pedals.

Unless you get good at riding the volume knob, you will run into output/volume issues when moving between guitars/pickups. I use a PRS with a set of Seymour Duncan P-Rails as my main "swiss army knife" guitar, with a Strat (usually with a humbucker in the bridge) for backup when gigging. With the P-Rails, the different pickup modes can vary widely in output: the rails have the least output (strat-like sounds), while the series humbucking mode has a lot more ouput (medium-to-high output humbucking tones). The P-90 and parallel modes are in between the two.

I usually stick to the parallel setting (a smooth, lower output humbucking tone). If I need a little volume/solo boost, I'll quickly flick to the series setting. If I need to clean up a little, I'll switch to the rails setting. If I need to get a little more aggressive tone, but not necessarily more volume, I'll switch to the P-90's. I play in a rock/pop cover band, with a large variety of songs; these pickups allow me to bring just one guitar to practice, without feeling the need to switch guitars for different songs.
F

Get a good sound man and don't worry about it.

A decent clean boost for single coils, Seymour Duncan Pickup Booster comes to mind, and I also go over to my amp and turn it up & down.

The volume knob on the amp? I mean, it's so obvious.

The only way I have been able to solve it is with my amp's volume knob. You need to get good at using it so you don't have to fidle with it much to get it to where you need it. Otherwise, you can do it with pedals like boost pedals like others have suggested. Relying on the sound man is a good idea, but it is hard to find someone who is really in tune with you and your set.

Differing output volumes is WHY I use different guitars!
If I need clean I play the Strat, if I need drive I play a G&L tele with MFD pickups. I'm shopping for a Humbucker guitar for distortion stuff.

The amp stays set the same.

How about an A/B switch for the guitars with a Fish and Chips or a GE-7 eq on the strat? The eq has a level boost AND adjustment to compensate for the single coils so it can become a basic setup on that "choice". A quick guitar swap, a step on the A/B and your done without having to adjust the amp for every swap.
N

I'm finding an active vol pedal really hits the spot. I use the vol on the guitar as a vol/tone control because it does change the tone so much as you back off. I find the active (powered) pedal lets me find my tone then adjust the vol

FrankieSixxxgun said:
The volume knob on the amp? I mean, it's so obvious.
Click to expand...

I know I know...but, it's tough for me to go back and forth on volume changes like that and then I risk volume wars trying to find the right settings. I will probably just stick with what I'm doing now.

You might want to check out the Fuchs Pure Gain Plus. From the ad: "the Pure Gain Plus allows you to both balance and boost the levels of two guitars (for example a single coil and a humbucker guitar). It switches to mono operation when only one instrument is plugged-in, allowing it to function as a three mode booster: bypass, and two discrete boost levels."
Just an idea. I understand you don't want to use any extra pedals but ya never know. 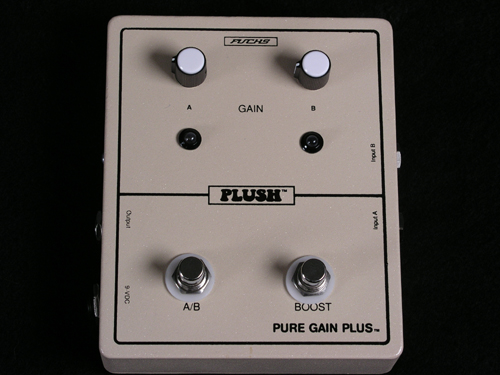 I know I know...but, it's tough for me to go back and forth on volume changes like that and then I risk volume wars trying to find the right settings. I will probably just stick with what I'm doing now.
Click to expand...

Just put some pencil ticks near your volume knob then. I had it down to a science on my JCM 800, but I'm learning my new AC30 and JMP. You get the hang of the volume knobs quicker than you think.

Never leave home without it.....

Load compensation for long cables[FONT=Verdana, Arial, Helvetica, sans-serif] [/FONT]
The Radial BigShot i/o is an easy to use instrument selector switch that lets you quickly transition between any two instruments and drive the signal to your amp. Because the i/o is 100% true-bypass, it addresses the needs of the most demanding purist. To further enhance connectivity, input-B is equipped with a level control called DIM that lets you reduce the signal from the louder of your two instruments so that both instruments are matched to the same volume level when they reach the amplifier. When passive instruments are used, a unique bright switch lets you compensate for high frequency loss due to longer cables.
To enhance on-stage functionality, the BigShot i/o is equipped with a tuner output. With a simple foot stomp on the MUTE switch, the sound going to the amp is turned off and diverted to the tuner for quiet on-stage adjustments. An always on switch also permits on-the-fly quiet tuning should you wish to have the tuner on at all times.
Compact, extremely rugged and completely passive, the BigShot i/o does not require any powering to make it work. This makes it ideal for pedalboards where the use of batteries or power supplies is painful! The BigShot i/o is also perfect for all you instruments and hi-Z line-level signal switching.
You must log in or register to reply here.
Share:
Facebook Twitter Reddit Pinterest Tumblr WhatsApp Email Share Link