What Phish Shows Are You Hitting This Summer?

I'm going to MPP thru Portsmouth. Might make it to Superball IX and UIC as well. And hopefully the CO Labor Day dates, but my friend is having his bachelor party that weekend...
P

Comin to Colorado? I can't wait. 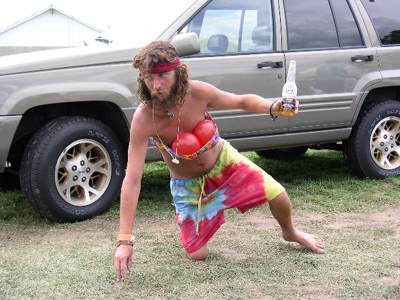 I will be hitting Bethel Woods NY and PNC NJ. I will probably end up at Superball IX.

MORRISON, CO&#8212;The music world was shaken by tragedy Sunday night when members of the popular rock band Phish collapsed on stage after being overcome by the stench of concert-goers during a show at the Red Rocks Amphitheater 20 miles outside Denver.

Phish bassist Mike Gordon, moments before he and his bandmates succumbed to fans' fumes.
The collapse occurred approximately 40 minutes into the song "You Enjoy Myself," when the four band members&#8212;Mike Gordon, Trey Anastasio, Johnathan Fishman and Page McConnell&#8212; became overwhelmed by a combination of body odor, marijuana and the patchouli oil many Phish fans use in lieu of bathing. The foursome was rushed to the emergency room of Denver Lutheran Hospital, where they were partially revived by emergency oxygen treatment. As of press time, the musicians are still listed in critical condition.
Though authorities are still debating the cause of the tragedy, preliminary reports indicate that a mechanical malfunction in the band's $45 million on-stage ventilation system is to blame. The system, which employs five computer-controlled, industrial-sized wind machines to blow fumes away from the stage area, has been used by the million-selling group since 1992 to combat the "danger layer" of toxic odors which surround the band's rabid fan base at all times.
Despite the ventilation breakdown, many observers feel that the real blame for the injuries lies with Phish itself, as for years the band has recklessly encouraged its fans' non-hygenic lifestyle.
"They've been burning the candle at both ends for way too long. This was bound to happen," said the EPA's Helen Duenoff, who as chair of the Hippie Band Toxicity Task Force has studied the effects of fan odor on members of bands like Phish, Rusted Root and Blues Traveler. "Phish's message of 'party now, wash later' has simply got to change."
Further controversy stems from the fact that efforts to save the stricken musicians were hampered by a semi-riot which occurred when rescue workers attempted to gain access to the stage area.
Surrounding the fallen performers in a circle of linked hands and attempting to heal them with "crystal light energy" and an improvised version of "Silent in the Morning," several hundred Phish fans erupted into violence at the sight of the gas mask-wearing, uniformed rescue personnel.
With angry shouts of "Attica!" and "Off the pig!" fans hurled hacky sacks and bongs at paramedics, and blocked ambulances arriving at the accident scene with hastily erected barricades.
Forming a linked-arm "human wall," the fans effectively trapped Phish and paramedics in a deadly envelope of unbreathable toxic vapor, holding off attempts to remove the band to safety for a full 30 minutes before finally being cleared by riot police, who used high-pressure fire hoses filled with a powerful soap/water solution to disperse the crowd.
"That was so wrong of those cops, man," said odorous fan Kathy Breyer, 20, whose brand-new hemp necklace and tie-dyed "Phishisgruvin" T-shirt were ruined in the hosing incident. "And worst of all, they did it right when the band was about to play 'Slave to the Traffic Light.'"
Added Breyer: "I have 940 bootlegs."
Only one member of Phish, singer/guitarist Trey Anastasio, managed to escape serious harm in the incident, going backstage unnoticed during one of the band's trademark hour-long jams to rest and consume drugs.
Anastasio was visibly moved as he spoke to the public. "I want to thank all our fans for massing here at the hospital in such incredible numbers, but believe me, we really need you to leave now," a gas-masked Anastasio said. "We appreciate the candlelight vigil and the chanting and all that, but the doctors all agree: We cannot hope to revive the rest of the guys unless we can somehow isolate them from the deadly column of vapors rising from the crowd."
Anastasio then attempted to rouse the assembled fans in a sing-along. "The skin is the part under the arm that makes contact with the soap," he sang to the crowd. "The soap is the bar that you use in the bath at your abode."
Two minutes into the refrain, Anastasio collapsed as well.
Phish's tour manager, Todd Geerholz, has vowed that steps will be taken to ensure that such an incident is not repeated.
"We are talking with Ticketron right now about requiring a chemical sponge bath for each customer before a ticket can be purchased," Geerholz said. "We're also definitely going to add a big personal hygiene appendix to next year's edition of the Phish Pharmers Almanac. If this is still not enough, Phish may have to forego touring altogether."
Preliminary testing indicates that as long as Phish's fans are not gathered together at one place for any extended lenghth of time, the stench rising from their unclean bodies will remain well under the life-threatening level.
Sunday's Phish collapse marks the most serious odor-related incident at a rock concert since July 1988, when Grateful Dead bassist Phil Lesh fell into a coma after an obese female fan ran on stage and hugged him during a show at Chicago's Soldier Field.

Bringing my 5yo daughter again. This'll actually be her 3rd Phish show. (She loves Phish and listens to them every night) This is a pick of us at last years show.
I told her a few months ago we got tickets and her first response was "don't forget the glow sticks."

Oh yeah, If you got kids, you gotta make sure to get hearing protection. It can get a bit loud. (Shamelss plug for part of my website) ;-)
http://www.erikzmusic.com/KidssafetyHeadphones.html
Last edited: May 18, 2011
W

The bethel days hopefully all 3... but may not be able to go to them all.
N

If my wife is feeling especially nice, I may make a road trip to CO for the three day run closer!!

I cant believe they are not going to be at Deer Creek or Alpine though. Well, mayeb they want a break. it might be kinda boring playing the same ole venues...
N

taez555 said:
I told her a few months ago we got tickets and her first response was "don't forget the glow sticks."
Click to expand...

Maybe thats why we love Phish so much. agood chance to close your eyes and enjoy the music. Being a kid again.

Will be at the June 10th show in Camden, NJ

Maybe thats why we love Phish so much. agood chance to close your eyes and enjoy the music. Being a kid again.
Click to expand...

If you're 5, the glowsticks are the best part.

It's funny, we actually got in an arguement last week, she's convinced the lyrics to Guelah Papyrus are actually "This is the work of the Googley Pirates"

taez555 said:
It's funny, we actually got in an arguement last week, she's convinced the lyrics to Guelah Papyrus are actually "This is the work of the Googley Pirates"

Love it! Back in the day, my friend Jeff used to sing, "I saw you, with a chicken sub in your hand!"

I'm hitting Charlotte & Raleigh. The best part is that one of my oldest and dearest friends and old touring buddy, Tim, is flying down from Buffalo for the shows.

That, and I'm a teacher and the shows will be during first week of summer vacation!

Have tix for Charlotte and Raleigh... may do Portsmouth too Cant Wait!!
M

as many as possible
S

Me too! I am taking my brother and my 12 year old son who is a huge Phish fan.
P


MAYBE Colorado for the three nights if I can swing it, i'm doing Bonnaroo before the ATL shows....
N