When you find a sweet deal on a guitar...

...and really shouldn’t buy it, what do you do? I’ve found an unreal deal on a PRS CE24, and while I just bought a Silver Sky, I just feel like I can’t say no. Do you finance it? Do you sell something you like and hope the new guitar is amazing? Or, do you hard pass and wait for when you are more financially ready?

I really should stay off the inter webs right now...

I was looking at $1k-1500 guitars and I had the cash. Stumbled across my dream guitar but it was almost $3k delivered. Ending up splurging because I got a deal I couldn't say no to (saved $500+), but I needed to finance half which I'll pay off in 3 months.

Seek help, you got the GAS.

chrisjnyc said:
I would pass on it if you dont have the $$$ You can always find a PRS later on
Click to expand...

T Dizz said:
finance it. thenn decide if I need to sell anyhting.
Click to expand...

Rumble said:
Seek help, you got the GAS.
Click to expand...

Here's what I tell myself - I'll sound exactly like me on any guitar I buy. Yes, different instruments can inspire differently, but you know what I mean. That usually quells the gas somewhat. On the other hand, if it is something I want to try and at the price I know I can either break even or come out ahead if I move it on, I might snag it anyway. But finance? Nope, nuh-uh, never. I'm either liquid enough to pay for it right away or it doesn't happen.

I wouldn't buy it, simple as that. I never sell something I know I like to buy something that I'm unsure of, and I never finance gear. But that's just me.
Besides, it's just a CE24. Those are easy to find pretty good deals on ime. If you still want one when you have the money (without having to finance it) for it, you'll be able to find another one.

I don’t buy it and practice so I make the guitars I have sound better.

it happens to all my friends who discover like , Porsche. Once they get their first Cayman or 911 carrera now they're all 'Porsche motorsports' and want to put their names in for GT3RS as the 'next' porsche to get... 3 yrs later they're driving something else

Shades of Blue said:
I’ve found an unreal deal on a PRS CE24, and while I just bought a Silver Sky, I just feel like I can’t say no. Do you finance it? Do you sell something you like and hope the new guitar is amazing? Or, do you hard pass and wait for when you are more financially ready?
Click to expand...

I wouldn't sell something I like but I've spent down to food money for the rest of the month, financed a few, and unfortunately had to pass on some.

It depends on what it is and how badly you want it. I financed my Elite Strat. It wasn't an unreal deal but I loved everything about it including the color and the color had been discontinued so there were only a couple left on the internet. I knew if I didn't get it I wouldn't have the chance to later.

I financed my Mesa Triple Crown 50. I had the money but didn't want to lay out $2K all at once so I did it in three payments.

I passed on a Gibson Johnny A after finally seeing one with a finish I liked that was under $3K because it was the wrong time for me to spend that kind of money.

It all depends on the instrument, the cost, and one's financial position at the time.
T

This Space For Rent

JosephZdyrski said:
I don’t buy it and practice so I make the guitars I have sound better.
Click to expand...

It would depend how much I wanted the second guitar, how often they come up, how well I know the market and how sweet that deal actually is.

'Ooh, that looks cool and I can afford it if I get it on finance' isn't usually enough for me. A great deal might swing it - my rule of thumb for 'sweet deal' is whether I'm getting dealer level buying price, because if the friendly local used guitar shop would pay that same amount for it I have an easy out if I turn out to have overstretched myself or I just don't like it as much as I thought I would. Something really unusual that I think might not come up again any time soon is another reason I might move on something at a non-ideal moment.

The finance route is usually my nuclear option for something that comes up where I really can't see another chance to get my hands on it, either because it's rare or it's a killer deal that makes it viable. As an example, one of my dream guitars was a Gibson Crest, which are rare, expensive and a CITES nightmare. One came up in Jan in the UK for half the average Reverb asking price, and I threw everything at getting that guitar. Fortunately I had a few grand in my guitar fund already but I still had to finance a fair bit - but it was a once in a lifetime opportunity on a guitar I'd always wanted so I thought it was worth going all in on that one. And it's paid off now and it's awesome.

I really do not like to tell someone how to spend their money, none of us know how you manage your finances. From my personal experience, I've spent a ton of money on gear over the last 3 years (check my joined date), but there are times where ive resisted an impulse buy, just based on an internal mechanism to not get over my head and have anxiety about cash flow. What I like about the used market is that if I get a good deal, and something either happens or I find that the guitar doesn't suit my needs, I can move it along without any financial hardship (for the most part). I feel you though, man. I had a line on a Hollowbody I back in April, I could have easily flipped it for profit, but my hands were in too many cookie jars at the time. Happy hunting!

So many responses because we can all relate. Sometimes I give in. Sometimes I don't. The rational part of me knows that there are always deals to be had out there and that I may be buying something that is not exactly what I want just to save 20% or so. But I don't always listen to myself.
B

I just try to convince myself, I have better guitars than this, already. In most cases, I do.

I'm being careful, what mood I am in before I even enter a guitar store or visit a music website. I'm way past the law of diminishing returns. I used to like to goof around, playing ten guitars within the space of an hour. That's not working for me anymore. That means, too many of these are just not in rotation anymore. And the solution is not an additional guitar, for sure.

This was the solution back in the old days.
A guy can't gig with a broken amp -- give in to that GAS.

That might be why Gibsons were extra popular -- easy to lose a headstock providing a perfect excuse for a replacement. "Honey, it just fell over. The cat did it!" ... "Now I gotta go guitar shopping ... again!" 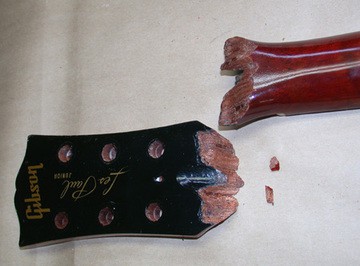