Which is Your Favorite Joe Walsh Songs from His Solo Albums (Not With The Eagles or James Gang)?

I could listen to A Life of Illusion 50 times in a row and still hit repeat...

Does Dueling Guitars from his stint with The Party Boys count? Album: You Need Professional Help.

Joe Walsh and Kevin Borich tore it up Down Under for a year or two.

My favorite is probably Turn To Stone, but a couple not yet mentioned:

“In The City” - his version on “The Warriors” soundtrack is arranged a bit differently than the slightly-later Eagles version; either way I love that song.

“The Radio Song” - an absolute gem from his not-so-great late-‘80s era. Some nice nostalgia with a great chorus. Would have been considered a classic Joe tune if it came out 10 years earlier IMO.

But Seriously TGP...
that is one good album.

It really is. The only one I skip is the hit!

I love so many of his songs and have all his albums. Just to throw another song in the mix - “Things”. Brilliant lyrics.

I like how Tomorrow has that 'uh-oh, uh-oh' hook from this cool Oldie.

Pretty much the entire album But Seriously, Folks... 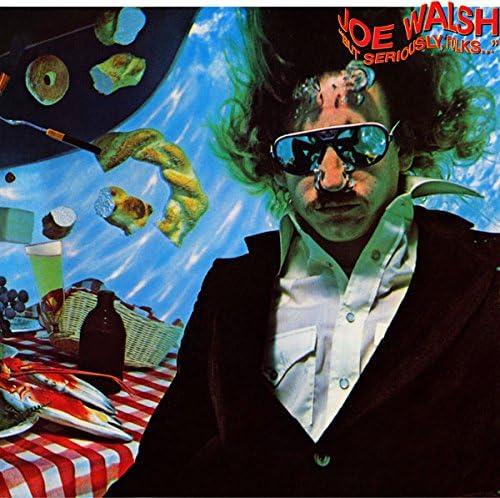 Barnstorm in its entirety is a masterpiece. But there are a ton of gems throughout his 70s catalog.

This piece is such a banner to me:

I was studying recording engineering right after it came out and was studying Bill Szymczyk's work. I'd played and listened to Joe and loved his work. This piece was recorded with a four-track on the 72' sailing yacht Endless Seas in the Florida Keys. The piano was overdubbed at Bill Szymczyk's studio, Bayshore studio. I used this cut as my monitor check track when going to a new studio for years. A friend bought Szymczyk's 24 track when he had to close the studio. Lots of connections!


Right after it came out, this one was used by a local weatherman while he displayed his statistic board. I heard it while on a short vacation in the mountains. A moment in time.


The intro is the result of the greatest studio prank in history.

Barnstorm and TSYDTPYG were, indeed, band albums. Joe resisted listing them as his solo albums for decades in deference to the band and only conceded and listed them in the last few years.

Tend my Garden, The Bomber, I like Big Tits (lol)

The intro is the result of the greatest studio prank in history.

Bob, could you elaborate on the prank? Meadows is one of my favorite Walsh tunes, especially the live versions, and specifically the version from Don Kirshners Rock Concert circa 1975.

Heinz W said:
Bob, could you elaborate on the prank? Meadows is one of my favorite Walsh tunes, especially the live versions, and specifically the version from Don Kirshners Rock Concert circa 1975.
Click to expand...

During the recording of The Smoker, Joe came up with an intro on "Meadows." He wanted to create a collage of voices like he had for the Barnstorm album. He started going around and asking everyone at the studio to participate. The problem was that everyone knew about Joe's crazy collages and no-one wanted to be a part of this mess. He spent several days harassing everyone including the studio staff and got no support. Frankly, he became a nuisance. Finally, producer/engineer Bill Szymczyk came up with a scheme to get him off everyone's back: He went around to everyone and secured their agreement and then went to Joe and said, "We will do your montage if you will agree to put WHATEVER GETS RECORDED on the record. WHATEVER GETS RECORDED." Glad that everyone was willing, Joe agreed.

Bill set up the studio with mics and headphones in several rooms for each of the staff to be routed to individual tracks on the multitrack. Everyone gathered in the studio and got directions from Joe and then went to their individual mics, where they were able to check that they all were routed. On a countdown, everyone shouted, screamed, laughed, whatever, just as Joe had directed. When the prescribed time was up, Bill had them all gather in the control room for the playback. They heard the solo Joe that we have all heard for all these years. Bill had routed everyone to his own multitrack channel but he only recorded Joe.

Years later on his Look What I Made box set, Joe described the situation and said, "I got it up the backside on that one."