Who here loosens their neck bolts while it’s under string pressure, then tightens them back?
Just curious.

why would anyone do this?

Timothy Martin said:
WHY would you do that, it sounds like a good way to destroy a guitar.
Click to expand...

Yeah, I've read about the concept but don't feel that my bolt-ons need it, nor could I bring myself to try what seems like a potentially perilous tweak anyway.

I've done it once, recently, after reading about it in this forum. I think the idea is that they should only be backed off a little, just enough to allow the neck to settle well back into the pocket under string tension. It also allows the opportunity the get the strings into good alignment with the neck.

I’ve done it to correct string alignment. It’s been a while buit worked fine.

I’ve heard some people say they’ve done it to set the neck in the pocket better but I’ve never tried it for that reason.

Timothy Martin said:
It is? I have never heard of that, but hey there are all kinds of things they say to do. I saw a guy on the internet tell people to bias their amps by putting tubes in and turning the bias up until they redplate, then back off(something you should NEVER do as it wont just destroy your tubes but possibly your amp as well.)
Click to expand...

Yeah, as mentioned above, there was a recent thread about it. Several youtubes were cited IIRC, and a few TGP luthiers chimed in and were not as dismissive as I expected, so there's potentially some validity when performed properly.

Rarely, but sometimes it's necessary. Definitely not "just because."

Was told about it over a decade ago as an old pro trick...
Don’t know if is/was/isn’t, but I’ve been a fan since I first tried it.
M

No. That's not how you get strings aligned. To align strings, take off all string tension, loosen the bolts, and then restire just enough tension to make the strinbgs run straight; wiggle to get things where you want, and then tighten the bolts before tuning up. Loosening the neck bolts under string tension is a transparently ridiculous idea. Must be a misunderstanding.

I’ve done it. However, I didn’t notice that it made any difference.

It’s not about alinement, more about getting the neck pressed against the body under pressure, then locking it back down.

I didn’t realize there was a thread on it earlier.

Haha.
It’s only a half turn or so per bolt.
I don’t see it damaging anything... never has anyway. But, I’m not saying people should do it, just curious if it was common.

Timothy Martin said:
I don't actually believe that their is, it is my opinion, but it is based in facts. Fact, strings exert ALOT of pressure, fact, loosening the screws on the neck under tension not only would put pressure in the wrong places on the neck and screws, fact, the friction fit between the neck and body is paramount to keeping the neck fixed in place properly, and fact, doing so could break screws, strip screw holes, and break the bottom of the neck. There to me seems no reason to do such a thing, and every reason to properly remove the neck if necessary....and I have never met anyone that thinks you should take a neck off of a guitar by loosening the screws with the strings in place.....too many reasons not to , not enough reason to in my book(people say all sorts of crazy things, and on the internet, too many gullible people willing to parrot garbage. if it sounds dangerous and stupid it probably is). I am not calling you stupid, but you asked the question and I gave you my honest opinion as a guitar player, former woodworker, and general music enthusiast.(the screws cause a friction between the neck and body of the guitar and this is a very strong force that is necessary.....I would bet they are saying that it would snug the neck to the body, a proper fit will do all you need to seat the neck where it should be, and most strings exert enough pressure under tension to hold the neck in place properly). (if there is a gap or the neck is not seated properly then it more than likely will seat itself without having to loosen anything anyway).. Like I said, people believe what they want, and you will too, you obviously find it interesting or you would not be defending it.
Click to expand...

WTF are you going off about?? I asked you no question, was only trying to be helpful by informing you of the previous discussion without passing judgement either way, and you're ranting away on something without first doing even the most cursory review of the subject.

Sheesh ...sorry I tried to help!

I've done it before to a parts guitar. It's supposed to pull the neck tighter in towards the body for better sustain. I didn't really notice a difference tbh.

G&L manual dates to the 80s. Done it plenty of times. 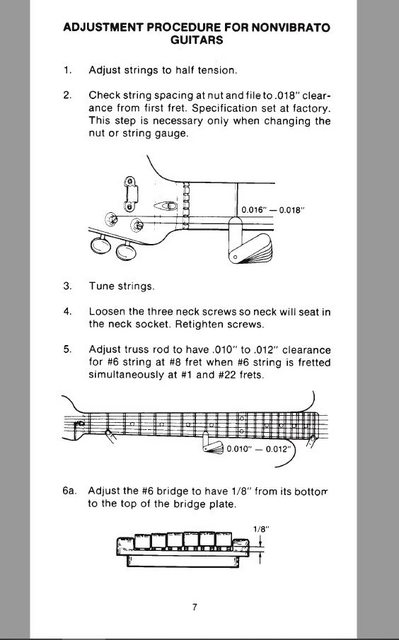 I just did a few days ago, and I often do the first time I fit a neck to the body. I brought it to tune and noticed one side off a bit. I loosed the screws just a couple of turns and I could feel the movement, and it pulled right in line.